The EUR/USD pair has edged lower for a third consecutive day, although its intraday range was once again limited, amid uncertainty surrounding the future of the UK and a scarce macroeconomic calendar. The pair fell to 1.1105, a fresh weekly low, following the sour tone of equities, which reflected the dismal mood. By the end of the day, the pair recovered to settle in the 1.1130 price zone.

The shared currency got its upside limited by the preliminary estimate of October Consumer Confidence, which fell to -7.6 from -6.5, worse than the -6.7 expected. This Thursday, the macroeconomic front will be more lively, as Markit will release the preliminary estimates of October PMI for the Union and the US. Additionally, the European Central Bank is having a monetary policy meeting, the last one presided by Mario Draghi. That said, it seems unlikely that policymakers would make relevant announcements this time. Rather, investors will be waiting for the upcoming President, Christine Lagarde, and her stance toward monetary policy.

The EUR/USD pair has met support around the 23.6% retracement of its latest bullish run, measured between 1.0878 and the high set this week at 1.1179. The short-term technical picture continues favoring another leg lower, as, in the 4-hour chart, the pair has remained below a flat 20 SMA, now at 1.1145. The Momentum indicator in the mentioned chart has recovered modestly but remains at daily lows within negative levels, while the RSI indicator advances at around 55, rather reflecting the latest daily advance than suggesting a steeper recovery. A break through the 1.1100 figure will likely result in a test of 1.1065, the 38.2% retracement of the mentioned rally, while the upside seems limited as long as the pair holds below 1.1180. 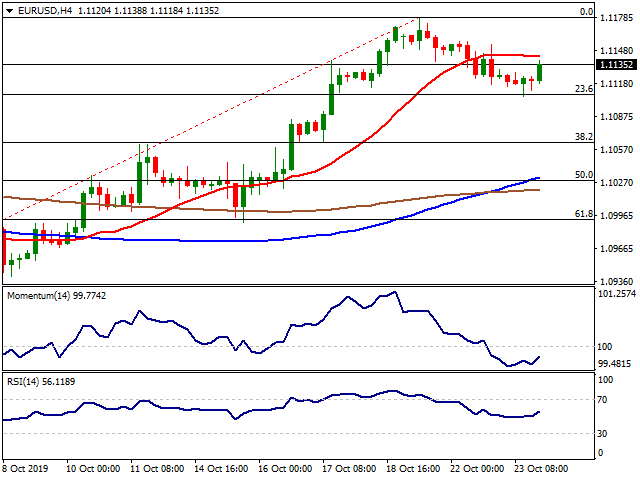 The Japanese yen appreciated at the beginning of the day, driving the USD/JPY pair to a fresh weekly low of 108.24. The Bank of Japan triggered some noise during Asian trading hours, with headlines reporting policymakers are considering lowering their forecast for economic growth and inflation this year. The central bank is scheduled to meet by the end of the month, and ahead of the event, market talks made the round suggesting that members see little merit in an interest-rate cut this month, but rather prefer to save ammunition for the case economic conditions deteriorate further. The pair recovered from the mentioned, low but there was no follow-through, as it settled around the 108.60 for a third consecutive day, with the poor performance of equities capping the advance.

Japan will release during the upcoming hours the August Economic Index and the Coincident Index, both expected unchanged from preliminary estimates. The country will also release the preliminary estimate of the October Jibun Bank Manufacturing PMI, with output in the sector seen contracting further, as the index is expected at 48.8 from 48.9 previously.

The USD/JPY pair has shrugged off its negative short-term potential, although it’s neutral short-term, and according to the 4-hour chart, as it’s trading a handful of pips above a flat 20 SMA, while technical indicators hover directionless around their midlines. The downside potential seems limited as long as the pair holds above the 108.00 level, which stands for the 38.2% retracement of its latest bullish run. 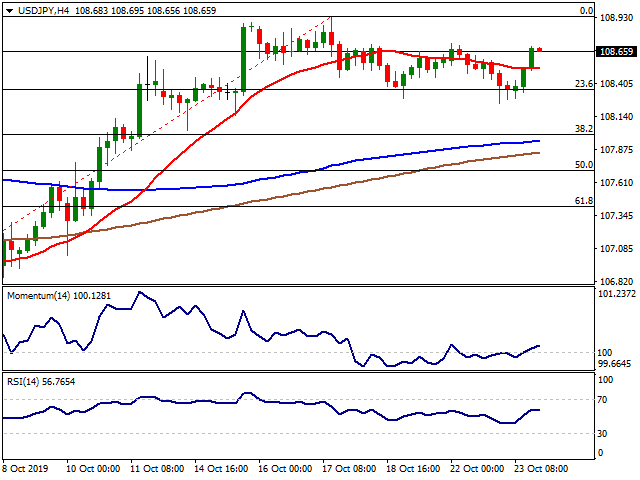 The GBP/USD pair is trading around 1.2920 by the end of the American session, up daily basis, although having extended its weekly decline to 1.2841. The pair spent the day below the 1.2900 figure, as the Pound fell out of the market’s favor after the Parliament put a lid to PM Johnson’s plan to get his Brexit deal approved before October 31st. The ball rolled the EU’s side of the court, as European leaders should now decide on a delay to the UK’s departure from the Union. Market talks suggest that the EU27 is willing to grant a three-month extension, although a formal announcement is not expected before Friday. In the meantime, odds for a new election increased. News agencies reported a “source” from Downing Street stated that “if parliament’s delay is agreed by Brussels, then the only way the country can move on is with an election.”

The UK macroeconomic calendar had nothing relevant to offer this Wednesday and will remain light during the next 24 hours, as the kingdom will only release September BBA Mortgage Approvals.

The GBP/USD pair is at the upper end of its daily range, but the risk remains skewed to the downside according to intraday technical readings. In the 4 hours chart, the pair is confined to a tight range below a flat 20 SMA, although still far above the larger ones, which maintain their bullish slopes. Technical indicators in the same chart are recovering the Momentum within negative levels, and the RSI entering positive ground. Overall, the pair has little chances of recovering ground as long as it remains below 1.2950, the immediate resistance. 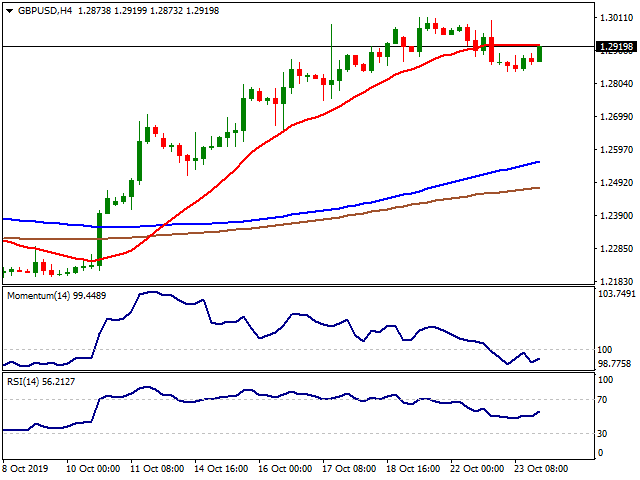 The AUD/USD pair is finishing the day with modest losses in the 0.6850 region after extending its weekly decline to 0.6833. The pair suffered as most of its major rivals from the lack of relevant fundamental data and uncertainty surrounding Brexit and trade progress between the US and China. About this last, and despite both parts suggest they are in their way to signing a deal, tensions re-surged on news indicating that China is seeking $2.4 billion in retaliatory sanctions against the US for non-compliance with a WTO ruling in a tariff dispute against the country back in the Obama era.

Australia is set to disclosure the preliminary estimates of the October Commonwealth Bank of Australia and Markit Economics  Manufacturing and Services Purchasing Managers' PMI. Both indexes are expected below September ones, at 49.0 and 52.2, respectively.

The AUD/USD pair is neutral in the short-term, as, in the 4 hours chart, it continues developing below a flat 20 SMA, while technical indicators hold directionless around their midlines. Nevertheless, dollar’s broad weakness favors a recovery during the upcoming hours, which will likely depend on data. A key resistance comes at 0.6900, with large stops suspected above it. 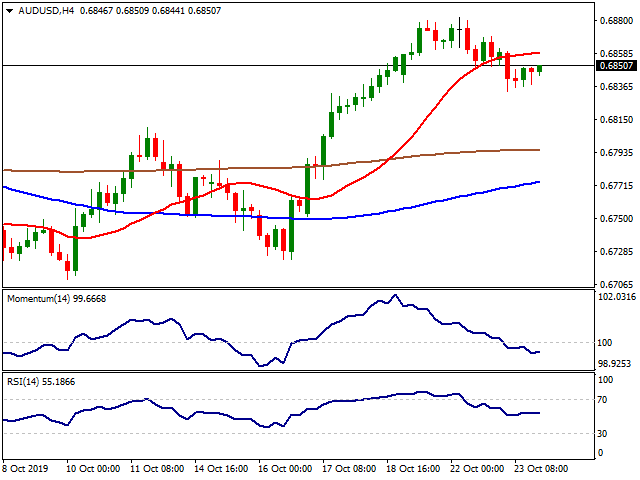 Spot gold ended with modest daily gains for a second consecutive day at $1.491.60 a troy ounce. The commodity approached the critical 1,500.00 threshold mid-US afternoon amid prevalent dollar’s weakness but retreated ahead of the close. Renewed Brexit concerns after British Prime Minister Boris Johnson's timetable to finalize his proposed deal got rejected by lawmakers, fueled demand for safe-haven assets.

Ranging for a fifth consecutive day, the short-term picture offers a neutral-to-bearish stance, as the pair is trapped between directionless moving averages, with the 200 SMA providing dynamic resistance at around 1,498.20. Technical indicators in the mentioned chart hover around their midlines without directional strength. The downward potential seems limited by risk-averse sentiment, with little chances of a downward move even in the case or resurgent dollar’s demand. 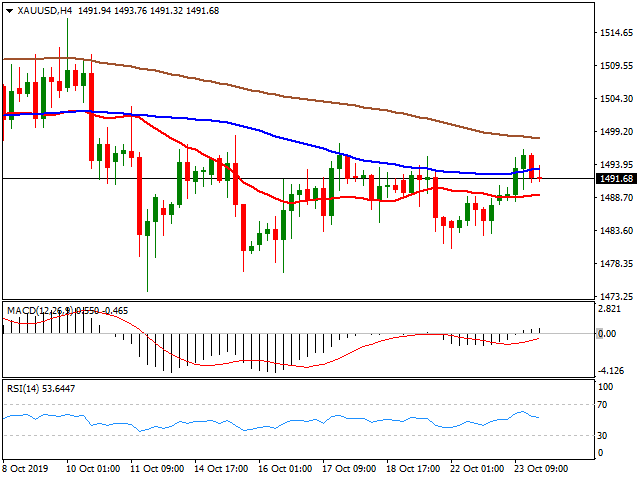 Silver continued to trade lifeless around $17.50 an ounce, closing flat a fourth consecutive day. Like most metals, it’s being affected by the US-China trade developments, as the market is unclear on whether a deal can be reached after the latest claim of China before the WTO. Adding to the ongoing tensions, and despite the encouraging comments from both parts, there’s no clear date on whether the first phase of a trade deal would be signed. To top it all, speculative interest has rather turned to safe-haven assets, included sovereign debt, which weighed on precious metals’ demand.

The white metal remains within a flag formation in the daily chart, approaching the zenith of the figure with no clear definitions. The short-term picture is neutral-to-bearish, as silver is pressuring its 20 and 100 SMA, well below a bearish 200 SMA, all of them lacking directional strength. Technical indicators hold within neutral levels turning marginally lower, skewing the risk toward the downside for the upcoming sessions. A steeper decline could be seen once below 17.40, the weekly low. 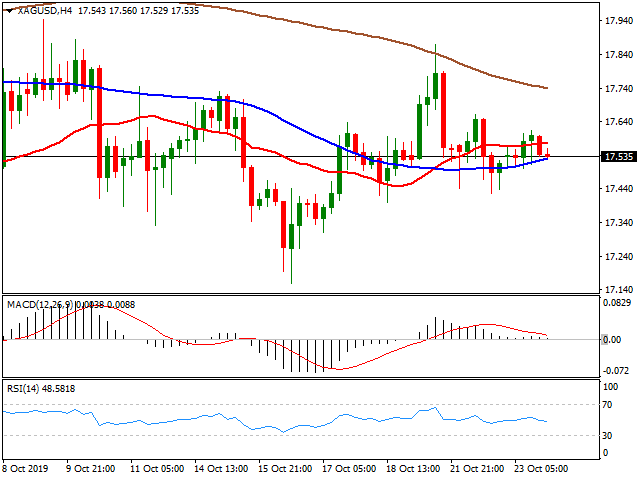 West Texas Intermediate crude oil price resurged this Thursday to settle at the $55.60 a barrel, backed by fundamental data coming from the US. The Energy Information Administration (EIA) reported a larger-than-anticipated draw in US crude oil stockpiles, which decreased by 1.7 million barrels in the week ending October 18. The report followed news indicating that the OPEC and its allies were planning to discuss deeper oil output cuts to counter the dismal oil demand growth outlook at their next meeting in December and allowed the WTI to close the day with a gain of more than 1%

The commodity has broken its latest range to the upside and trades at its highest since the end of September. WTI, however, halted its advance around its 100 DMA. In the shorter term, and according to the 4 hours chart, it has settled a few pips above a directionless 200 SMA, still holding above all of its moving averages, and with the 20 SMA gaining upward traction, skewing the risk toward the upside. Technical indicators hold within positive ground, although the upward momentum is limited, with the RSI now flat around overbought levels. 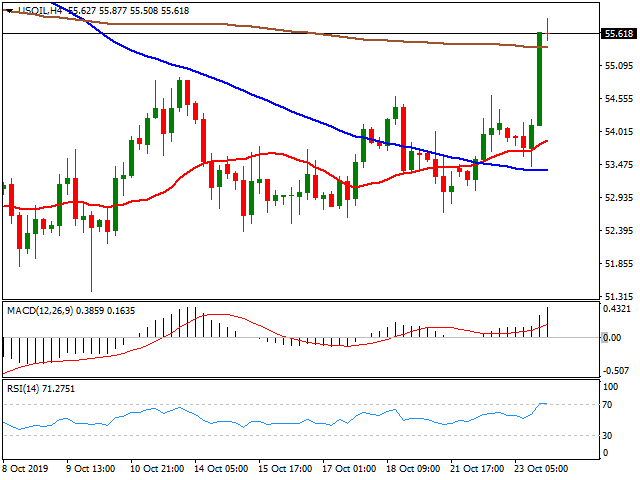 US indexes ended the day with modest gains, with the DJIA adding 45 points to settle at 26,883.95. The NASDAQ Composite added 15 points, while the S&P closed 0.28% higher. Equities around the world traded dully amid persistent Brexit uncertainty and renewed US-China trade concerns. The absence of relevant macroeconomic headlines that can trigger a directional move, added to the quietness in the financial world. Stocks marched higher despite a series of disappointing earnings reports, which fueled concerns about a recession in the US.

The DJIA has plummeted to 26,645 before bouncing finding buyers after nearing a bullish 100 DMA and briefly piercing a directionless 20 SMA. In the 4 hours chart, the index is battling with a mild bearish 20 SMA, which converges with a flat 200 SMA, having bounced from a flat 100 SMA. Technical indicators hover just below their midlines, without clear directional strength. 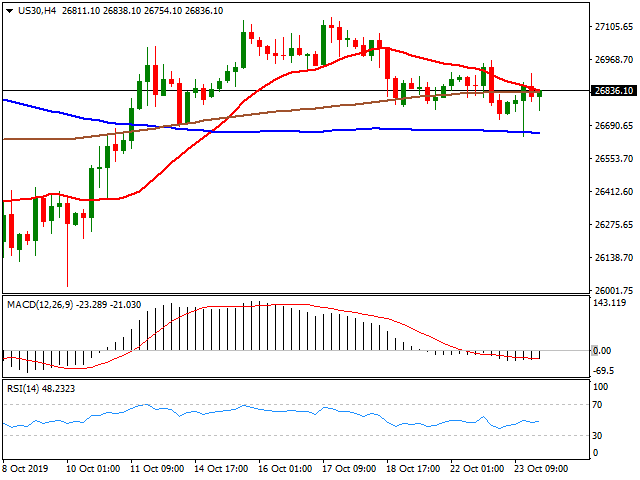