The EUR/USD pair is trading just below the 1.1100 level at the end of the first day of the week, with the greenback giving back part of its latest gains. A better market mood kept the shared currency afloat, with worldwide equities up amid solid earnings reports. Wall Street flirted with record highs, although indexes trimmed a good chunk of their intraday gains ahead of the close. Nevertheless, the dollar remained under pressure throughout the day as well as other assets considered safe-havens.

Minor data coming from these two economies failed to impress. The Union released September Money Supply, which resulted at 5.5% YoY, missing the market’s expectations, while for the quarter it rose by 5.5% as expected. Private Loans were up by 3.4% against the expected 3.5%. In the US,  the September Chicago Fed National Activity Index, which came in at -45 against the expected -0.37, and the Goods Trade Balance for the same month, which posted a deficit of $70.39B. Wholesales inventories declined by 0.3%. Finally, the October Dallas Fed Manufacturing Business Index contracted to -5.1 from 1.4 previously. This Tuesday, the only relevant figure will be the US CB Consumer Confidence index, which, anyway, could have a limited impact ahead of US first-tier data scheduled for later in the week.

The EUR/USD pair has remained below the 23.6% retracement of its October rally around 1.1110. In the 4-hour chart, the risk is skewed to the downside, as the pair is trading below a bearish 20 SMA, which converges with the mentioned Fibonacci resistance. The Momentum indicator heads marginally lower while the RSI consolidates, both within negative levels. The bearish case would be firmer on a break below 1.1065, the 38.2% retracement of the mentioned October rally. 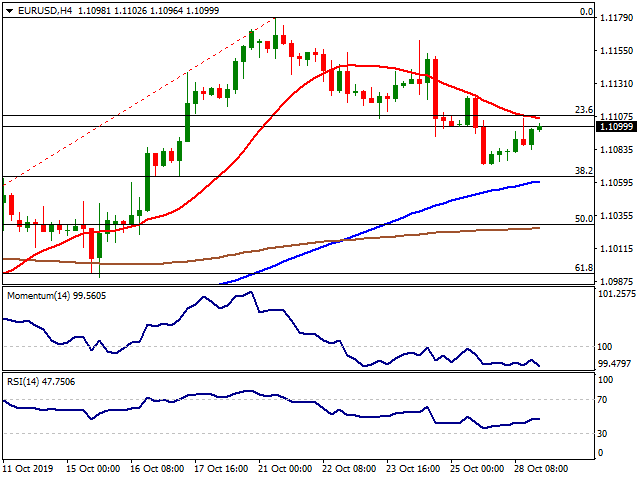 Easing hard-Brexit fears and solid earnings reports sent the USD/JPY pair to a fresh monthly high of 109.03 mid-US afternoon, retreating just modestly afterward to close the day just below the 109.00 figure. Adding to the positive tone of the pair, US President Trump said that they are “ahead of schedule” with finalizing phase one of the trade agreement with China, further fueling the positive sentiment. US Treasury yields advanced, with the benchmark yield on the 10-year Treasury note reaching 1.86%.

The USD/JPY pair keeps heading toward the 109.30 price zone, where it set a high last August and where bulls’ determination will be put to test. Meanwhile, the 4-hour chart shows that the price bounced from a now 20 SMA, which advances above the larger ones. Technical indicators have reached fresh weekly highs, but barely above their midlines, offering limited directional strength. 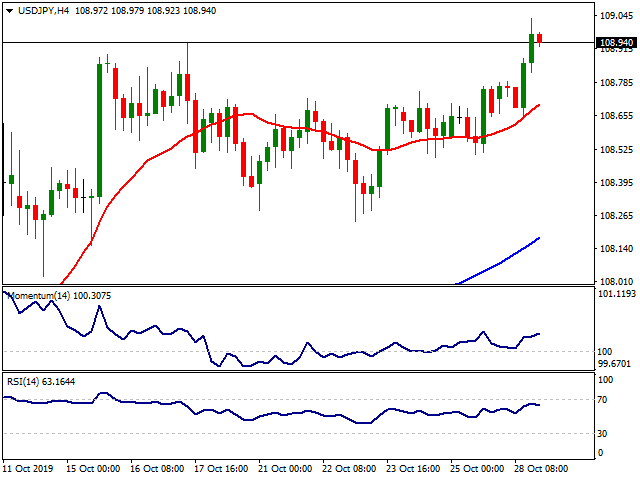 The GBP/USD pair surged to 1.2876, as the European Union granted a Brexit “flextension,” according to EU Tusk’s words, until January 31. Such an announcement limits the chances of a no-deal Brexit, at least temporarily. The Brexit delay will be formally approved during the upcoming days by EU27. In the meantime, Johnson sent a letter formally agreeing on the extension, reiterating his objection to such prolongation. Mid US-afternoon, Johnson put before the Parliament his motion to hold a general election next September 12, which was rejected, as expected. Johnson then announced that he would try to bypass the majority rule by introducing a new one-line piece of legislation that would effectively override the current election law.

In the data front, the UK released the CBI Distributive Trade Survey on Realized Sales, which cam in better-than-anticipated, falling by -10% following a -16% in September. This Tuesday, the UK will release September Money Supply and Mortgage Approvals figures.

The GBP/USD pair held on to gains by the end of the American session, trading a handful of pips below the mentioned daily high. The pair has recovered just modestly above the 23.6% retracement of its latest daily run, with no much follow-through beyond it. The 4 hours chart shows that it’s currently battling with a flat 20 SMA, while technical indicators continue lacking directional strength around their midlines, reflecting traders’ cautious stance. 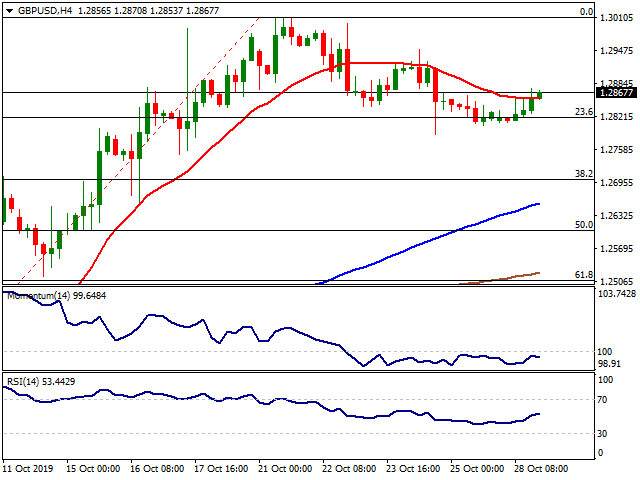 The Australian dollar recovered against its US rival, with the pair hitting 0.6844 before braking. The pair’s advance became more relevant during US trading hours, following comments from President Trump indicating progress in phase one of the trade deal. Trump added that they were expecting to sign it at the APEC summit in Chile in November. The positive tone of equities also helped the Aussie, although Wall Street’s late retracement and the sour tone of commodities limited the pair’s gains.

There are no macroeconomic events scheduled for release in Australia, although RBA’s Governor Lowe is due to deliver a speech, not particularly linked to monetary policy.

The AUD/USD pair is trading just below the 23.6% retracement of its latest bullish move, having recovered within range. In the 4-hour chart, the pair is technically neutral, as it recovered above its 20 SMA, now directionless, while technical indicators have bounced from daily lows to reach their midlines before losing directional strength. The risk of a downward move receded, but chances of a bullish run are even lower at the time being, as sellers will probably surge, on approaches to the 0.6900 price zone. 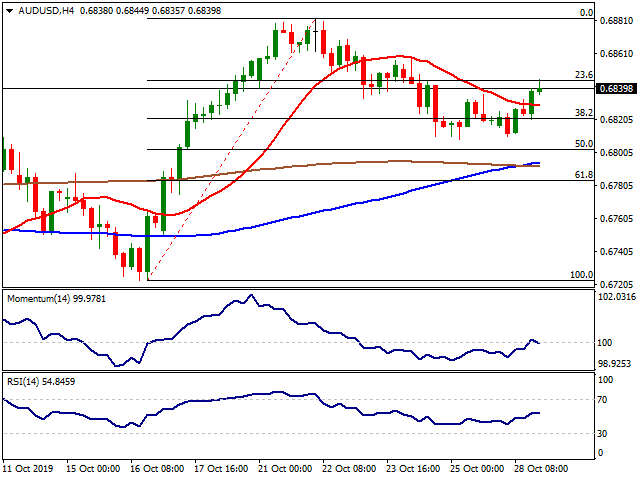 As the markets head into important data week, Gold could not hold its position over the 1.500$ level and stretched its down move to 1.490$ on the first day of trading. In general, lingering recession fears on both sides of the pond and geopolitical fears still supports the gold demand as a safe haven. On the other hand, news about positive progress in US/China trade talks supported the risk-on trade and pressurized the yellow metal. Although the highly expected this year’s final rate cut from the FED is considered as bullish for Gold, the market reaction can be limited this time as the move can be priced already. Also, postponed Brexit drama supports the risk-on mood in the markets and pressurise the safe-haven metal. GDP figures from the US and NFP data set expected to add more volatility to trading in general by the end of the week. 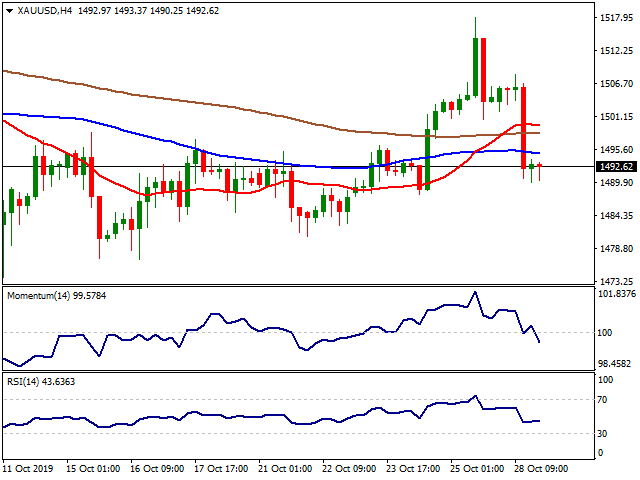 Along with the yellow metal, silver lost almost %0,83 on the first day of trading as we are heading to important data week unable to hold over 18$ mark. In general, while the precious metals are gaining ground in line with the expectations of central banks globally will continue to keep monetary policy extraordinary easy, while base metals have found support amid optimism over a US-China trade deal. On the other hand, along with the traditional Gold demand from India, the countries Silver imports peaked to new high levels which might be a catalyst for the metal. India covers almost %17 of the global silver demand while %50 of the global silver demand is considered as industrial purposes. 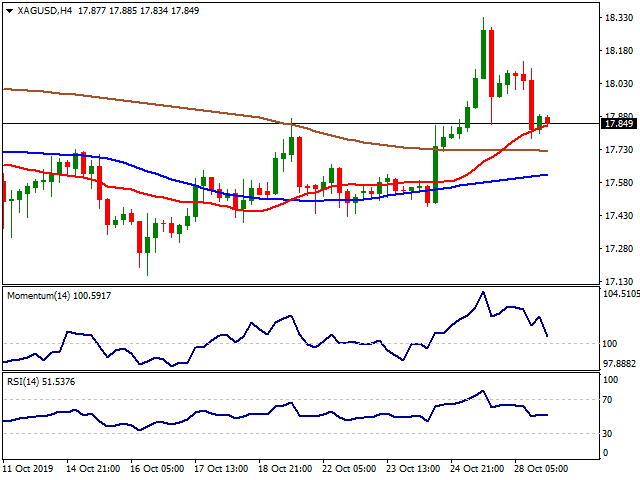 On Monday, after testing the monthly high,  WTI retraced back amid renewed trade optimism between the US and China is supporting the expectations of a bigger demand. Last week WTI rose around %5.5 and while eager to finish the month on a positive level, news from Russia pressured the black gold.  Russia's deputy energy minister on Monday said that they will "factor in" the slowdown of the oil production in the United States and added that it was too premature to talk about deeper output cuts. Oil traders will follow the upcoming OPEC+ meeting. 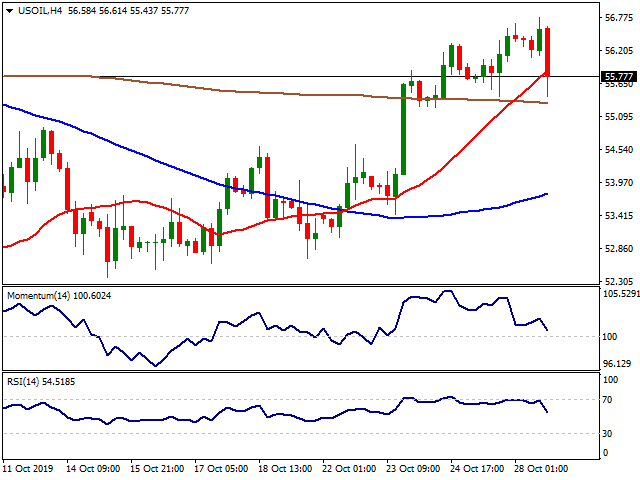 The Dow Jones Industrial Average (DJIA) started the week on a positive note supported by renewed trade optimism and hopes of the Federal Reserve opting out for one more rate cut later this week. According to the CME Group FedWatch Tool, markets are pricing a 95% probability of the Fed bringing the policy rate down to 1.5%-1.75% range. After opening 0.7% higher, the DJIA retreated slightly in the second half of the session but remained on track to close the day in the positive territory. Meanwhile, the S&P 500 capitalized on the upbeat market mood and reached a fresh record high on Monday at 3,044 points.

US President Donald Trump on Monday reiterated that they were expecting to finalize the phase one of the trade deal with China "ahead of schedule" and we’re expecting to sign the deal at the APEC summit in Chile in November. 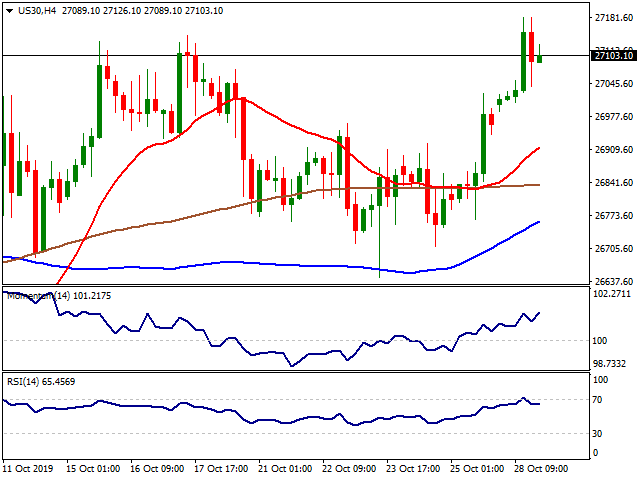