The EUR/USD fell sharply during Thursday’s New York session as the dollar strengthened and US yields rose, amid diminishing hopes for a phase one trade deal between the United States and China.

Media outlets have reported that China had invited US negotiators to meetings in Beijing, suggesting there are some remaining issues to sort out. Meanwhile, the South China Morning Post (SCMP) has reported that a high-profile signing ceremony of the Hong-Kong bill may anger China, which is closely watching the events.

Earlier in the day, the minutes of the latest European Central Bank meeting were published. A plea for patience was made to allow the measures taken in September to work through the economy, supporting a wait and see posture at the current juncture. On Friday, Christine Lagarde will be speaking for the first time as the ECB President.

US macroeconomic data was mixed. While the Philly Fed Manufacturing Index came in above expectations (printing 10.4 in November from 5.6 previous and 7 of consensus), last week’s initial jobless claims and existing home sales disappointed.

EUR/USD briefly rose above the 100-day SMA and touched a high of 1.1096 before turning down and falling back to the 1.1050 area. The technical picture has turned negative in the 4-hour chart and in the daily chart. The 1.1050 support has managed to hold the bearish pressure so far, but a break below would pave the way towards its November’s low of 1.0989.

On the upside, immediate resistance is seen at the 100-day SMA, currently at 1.1088, followed by the 1.1100 area. However, a break above the 1.1175 zone, where the 200-day SMA converges with October’s monthly high, is needed to shift the longer-term bias to the upside. 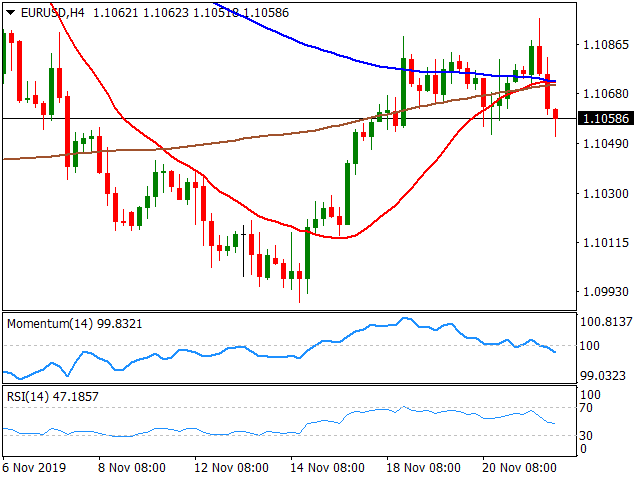 The USD/JPY pair rose modestly during the American session, boosted by higher US yields. The 10-year US Treasury bond yield, which closed the previous three days in the negative territory, staged a recovery and was last at 1.785%.

The dollar managed to capitalize on a batch of mixed macroeconomic data. During the upcoming Asian session, Japanese Consumer Price Index data will be published. Later in the day, US Manufacturing and Services PMI data collected by Markit will be released.

USD/JPY has managed to record its second gain in a row, although overall, it continues to trade within its longer-term range. The technical perspective remains neutral in the 4-hour chart, with flat indicators, while the spot consolidates below the 100-period SMA but above the 20- and 200-period ones. In the daily chart, the perspective has improved slightly but remains overall neutral. As mentioned in previous updates, a break below 107.70 (100-day SMA) or above 108.95 (200-day SMA) could propel a decisive move for the pair. 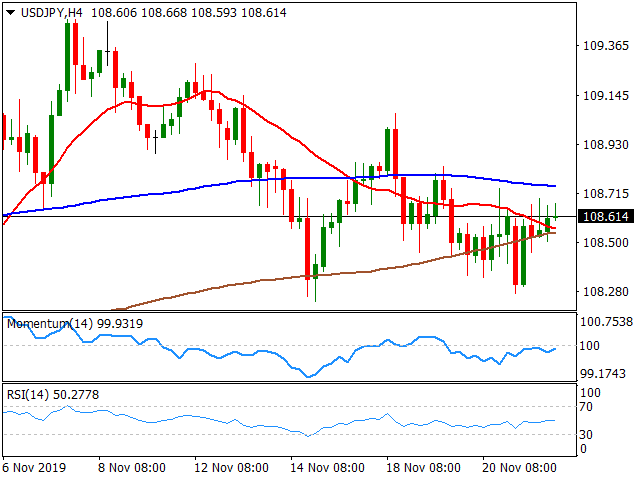 The GBP/USD pair retreated on Thursday and briefly dropped below the 1.29 mark, dragged down by a stronger dollar across the board, amid lack of progress in US-China trade talks and the absence of headlines surrounding the UK general elections.

GBP/USD hit a daily low of 1.2893, just a few pips above Wednesday low of 1.2887 and the 20-day SMA, which offers dynamic support currently at 1.2878. With the pair recording its second loss in three days, the technical picture has turned bearish in the 4-hour chart, although indicators are stabilizing near their lows and spot remains contained by the 50-period SMA at 1.2875.

In the daily chart, the perspective remains neutral, with indicators flat around their midlines and the GBP/USD trading above the 20-day SMA, while the 50- and 100-day SMAs move toward a bullish cross. However, repeated failure to break above the 1.3000/10 resistance zone could make the tables turn. Should the cable break above 1.3010, the next significant resistance is seen at 1.3060, which is the 100-week SMA. 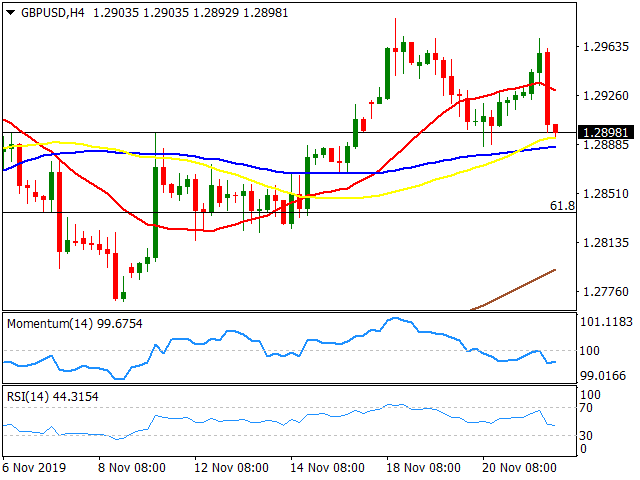 The AUD/USD was dragged lower by a stronger greenback and ended the day below the 0.68 mark for the first time this week. The headlines surrounding the US-China trade war continued to dominate the market’s mood, which seesawed throughout the day.  However, the Aussie has its own issues – the Reserve Bank of Australia minutes showed that the board actively discussed a rate cut at the last meeting, which has been weighing on the currency over the previous sessions.

From a technical point of view, the short term perspective remains tilted to the downside according to the 4-hour indicators, which are exhibiting strongly bearish slopes. In the daily chart, the picture is also bearish with AUD/USD trading well below a descendent 100-day SMA, which offers strong resistance at the 0.6830 zone.

On the downside, the next support is seen at 0.6770, which is last week’s low. A break below this latter could encourage bears and send the pair quickly to 0.6720 and even pave the way for a retest of its decade-low of 0.6670. 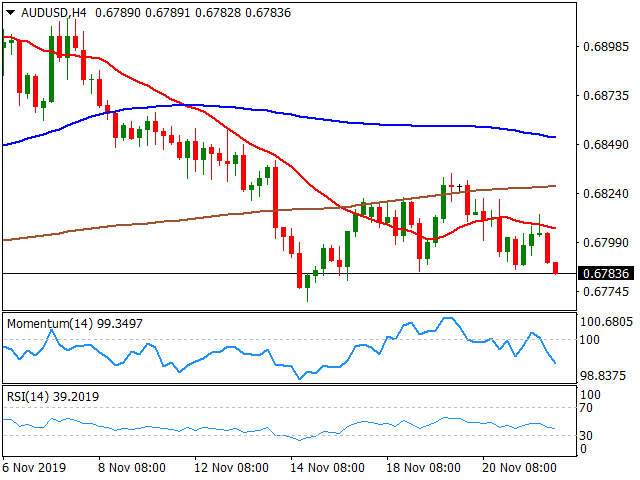 Gold ended its weak attempt to move up since the start of the week and retraced back with the improved risk-on sentiment although negative developments from the trade deal front still linger. On Wednesday, the US Congress approved the Hong-Kong Human Rights and Democracy Act and the bill is awaiting President Donald Trump's signature to turn it into law. However, if the Trump administration will try to pressure China with this move, a possible deal might be in danger at least in the close term. For now, the markets seem to ignore the negative news at least at Gold front pushing the prices down. 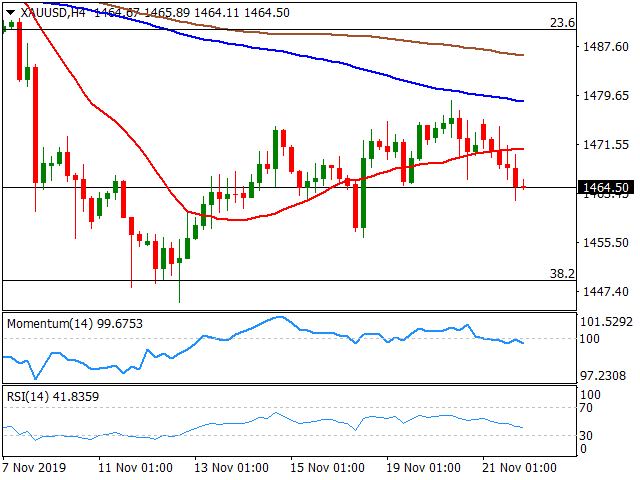 Despite the retracement seen on Thursday trading, Silver is still trying to hold over 17.00$. On the demand side, for the second year in a row, silver industrial production will be a new record high. In the wake of the escalating US-China trade war, several areas of electrical and electronic end-uses have struggled, broadly in line with a global economic downturn due to uncertainty. However, their negative impact on silver demand has been mitigated by higher silver loadings, especially in the all-important automotive sector (as vehicles become more sophisticated). In addition, silver consumption in the photovoltaics sector has also grown as more countries push ahead with renewable energy projects in 2019. As a result, with the resolution of the trade deal, unlike Gold, Silver prices might be supported due to its industrial demand. 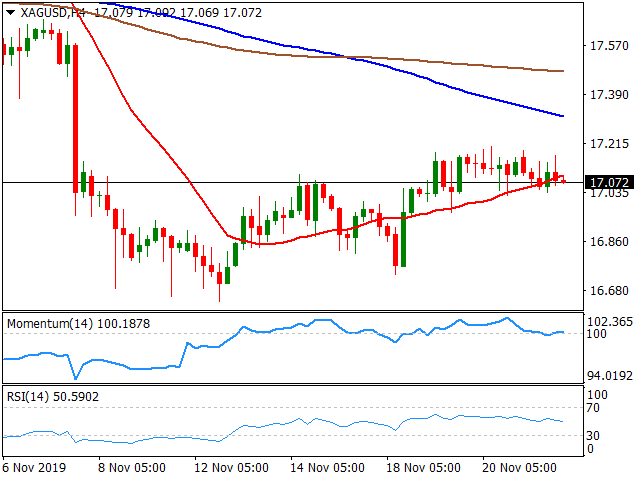 With the expectation of a possible increase in production cuts by OPEC, WTI had a strong rally back to back. Due to a Reuters report, OPEC members including Russia will have an agreement on deeper production cuts on its meeting between 5th and 6th of December. On the other hand, as the trade talks uncertainty still dominates the market sentiment, this week’s stock data in the US were better than expected. 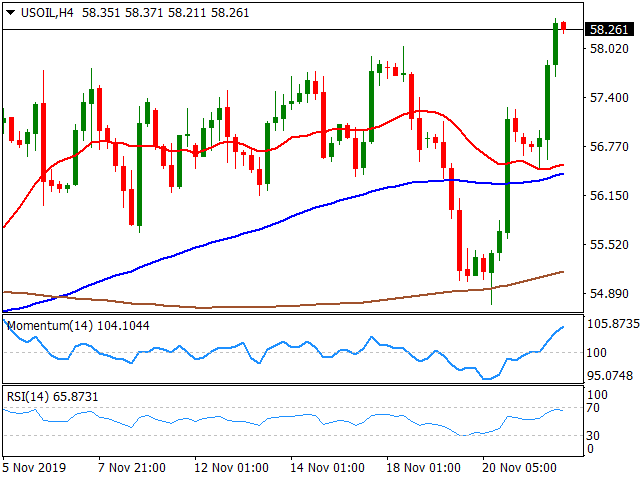 The uncertainty surrounding the trade deal is still the biggest market catalyst as we come closer to year-end. While there are still a lot of grey areas on the air regarding the trade deal,  on Wednesday, the US Congress approved the Hong-Kong Human Rights and Democracy Act. As President Trump is expected to sign the act on Thursday, this move might add extra tension to the US and China relations. Also, the impeachment hearing is now in its fourth day. With all the domestic and global events, the CBOE Volatility Index, Wall Street's fear gauge, is up nearly 4% to reflect the gloomy mood. 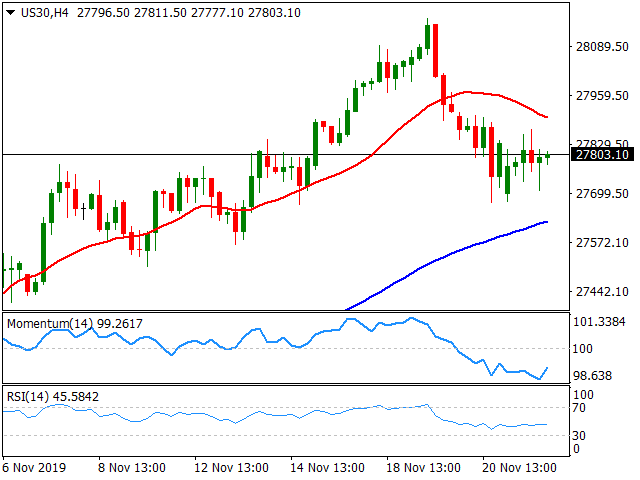