The EUR/USD pair fell last Friday to 1.0980, its lowest for November, as the greenback was generally stronger in thinned holiday trading. The dollar’s rally stalled ahead of London’s close, with profit-taking amid month-end flows helping EUR/USD recover the 1.10 threshold, to close the week unchanged a few pips above the mentioned level. Volumes were extremely low throughout the week, not only because of the long US holiday but also because of the uncertainty surrounding US-China trade negotiations. Representatives from both sides have made encouraging statements, but the market sees no actual progress, and chances that a deal will be clinched before year-end are now quite limited.

Data were scarce by the end of the week, although German figures fell short of expectations, as October Retail Sales were down by 1.9% in the month, and barely up by 0.8% when compared to a year earlier. The EU released the preliminary estimate of November inflation, with the core annual CPI beating expectations with 1.3%.

Risk on should take over the market at the weekly opening, amid better-than-anticipated Chinese data released over the weekend. For the EUR, the focus will be on the final versions of the Markit November PMI, seen little changed from preliminary estimates. The US manufacturing index is also seen unchanged at 52.2.

The EUR/USD pair is technically bearish, although it managed to bounce from around the 61.8% retracement of the October rally, unable, however, to advance beyond the 50% retracement of the same advance. In the daily chart, the risk is skewed to the downside, as the pair keeps developing below all of its moving averages, with the 20 DMA heading firmly lower above the mentioned Fibonacci resistance. Technical indicators head nowhere, developing below their midlines.  In the 4-hour chart, the pair is technically neutral, as technical indicators lost directional strength after entering positive territory, while the pair settled above a flat 20 SMA, but below bearish larger ones. 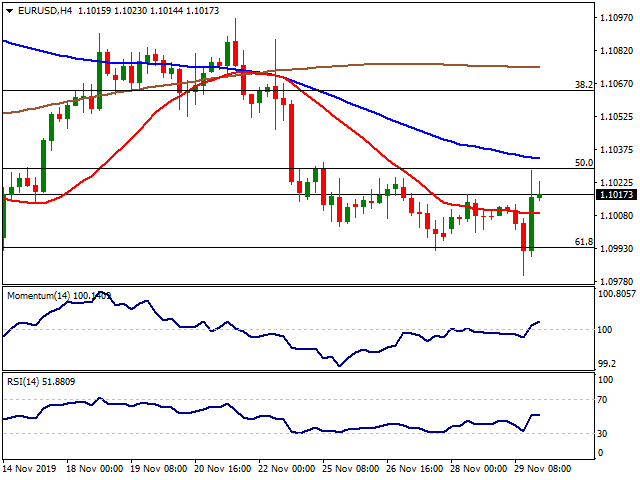 The USD/JPY pair has closed Friday at 109.45, its highest weekly settlement in six months. It hit 109.66 before retreating as the greenback suffered a knee-jerk amid month-end fixing, but overall retains the bullish strength. Japanese data released on Friday was mixed, as Tokyo November inflation beat the market’s expectations, up by 0.8% YoY. The core reading ex-fresh food met the market’s expectations, printing at 0.6%. The preliminary estimate of October Industrial Production, however, plummeted by 4.2% in the month and by 7.4% when compared to a year earlier. Finally, November Consumer Confidence bounced, up to 38.7.

In a thinned US session, the pair traded uneventfully, weighed by the sour tone of equities yet underpinned by rising US Treasury yields, as the yield on the benchmark 10-year Treasury note rose to 1.79% to close the week at 1.77%. This Monday, Japan will release the November Jibun Bank Manufacturing PMI, seen steady at 48.6.

The USD/JPY pair is offering a neutral-to-bullish stance in its daily chart, as it continues developing above all of its moving averages, and with the 20 DMA about to cross above the 200 DMA. Technical indicators, in the meantime, consolidate within positive levels. In the shorter term, and according to the 4-hour chart, the pair met intraday buyers around a strongly bullish 20 SMA, while technical indicators corrected overbought conditions to settle within positive levels, keeping the risk skewed to the upside. 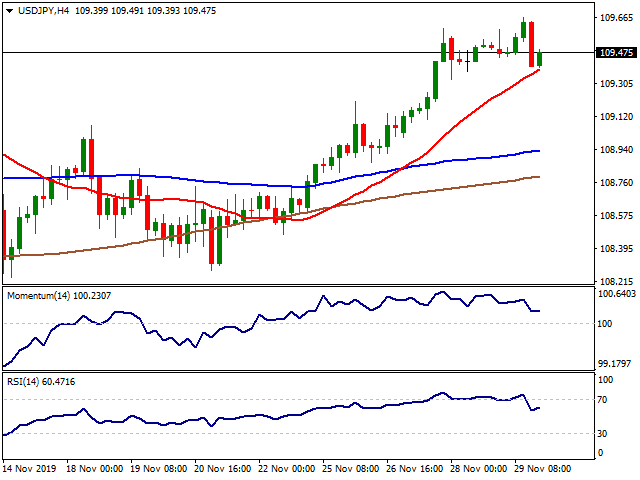 The GBP/USD pair finished the last week of November in the 1.2930 price zone, mostly supported by broad dollar’s weakness ahead of the close. Nevertheless, the pair has held within familiar levels, as speculative interest is waiting for the outcome of the UK general election next December 12. The Conservative lead that could result in PM Johnson’s victory also with Brexit has been shrinking these last couple of weeks, spurring concerns about a possible hung Parliament. News over the weekend hint some Pound weakness at the opening, as, according to a  BMG Research poll for The Independent, such lead has halved in just one week. The latest survey attributes a 39% vote intention for Conservatives, and a 33% to Labour.

This Monday, Markit will release the final revision for the UK November Manufacturing PMI, foreseen unchanged from the previous estimate at 48.3

The GBP/USD pair is technically neutral, although at the upper end of its latest range, not far from October’s top at 1.3012, the highest level since last May. For most of November, the pair has been holding above the 23.6% retracement of the October rally at around 1.2820, although below the mentioned high, and needs to break one of those to find directional strength. In the daily chart, the pair has settled above a directionless 20 DMA, while technical indicators lack strength, just above their midlines. In the 4-hour chart, the pair met buyers around its 100 and 200 SMA, both converging at around 1.2880, while the 20 SMA heads higher above them. Technical indicators stand within positive levels, although with no clear directional strength. 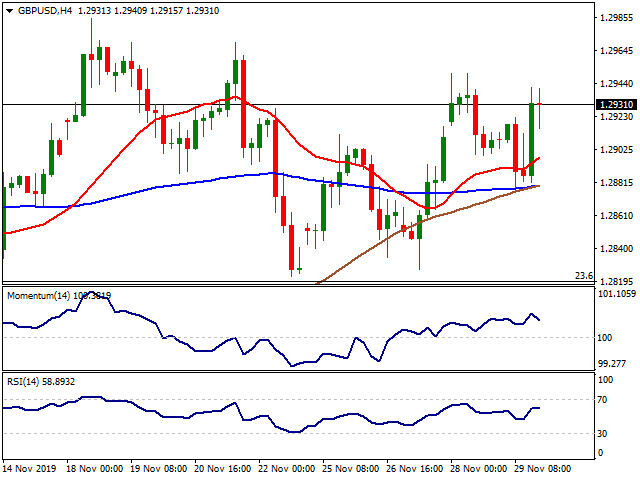 The AUD/USD pair settled at around 0.6760, falling for a fourth consecutive week. The commodity-linked currency was pressured by demand for the greenback, unable to bounce back despite a recovery in gold prices ahead of the close. Australian data released last Friday weighed, as  October HIA New Home Sales were down by 0.5% in the month, far worse than the 6.6% gain expected. Also, Private Sector Credit in the same month increased by 0.1%, missing the market’s forecast of 0.3%.

Weekend news may give the Aussie a boost at the opening, as Chinese official November PMI beat the market’s estimates. The manufacturing index has come in at 50.2, after printing 49.3 in the previous month, while the non-manufacturing index printed at 54.4, much better than the previous 52.8. Australia will release this Monday the November AIG Performance of Manufacturing Index, previously at 51.6, and the Commonwealth Bank Manufacturing PMI seen at 49.9. Later in the day, the country will release the November estimate of the TD Securities Inflation.

The daily chart for the AUD/USD pair shows that the pair is bearish, and a bounce would hardly affect the dominant trend. The 20 DMA is about to cross the 100 DMA, both at around 0.6820, while technical indicators remain within negative levels, the RSI heading firmly south at around 37. The pair has some relevant highs in the 0.6830 price zone and would need to accelerate through this area to start reversing its negative stance. In the shorter term, and according to the 4-hour chart, the technical picture is also bearish, as sellers continue to reject advances around the 20 SMA, while technical indicators maintain their downward slopes within negative territory. 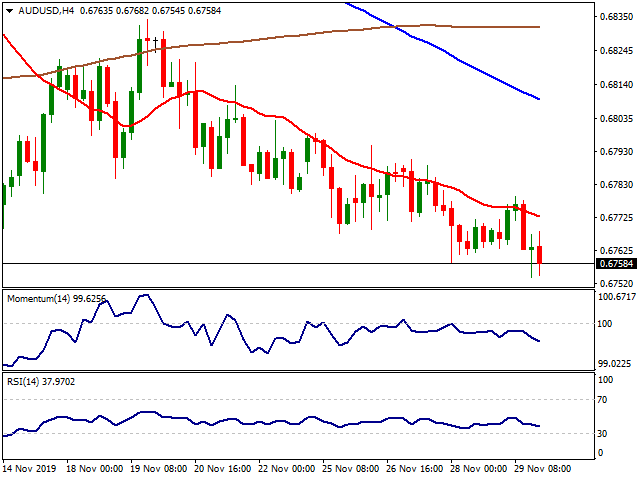 Gold had another attempt to gain traction up on Friday although the yellow metal ended the month with a loss of %3.24 which is the biggest monthly drop since June 2018. The positive sentiment about the trade deal was dominant usually while some negative comments and events such as the Hong Kong pro-democracy bill supported the safe havens last month against further losses. The trade deal developments will continue to dominate the markets while a possible year-end rally might also put Gold trade under extra pressure until the new year holiday. On the USD front, better than expected Q3 GDP and the FED’s beige book signalling the economic growth supported the greenback which also limited the gains in Gold. This week the US labour market data set will be followed by the investors alongside the developments regarding the trade deal. 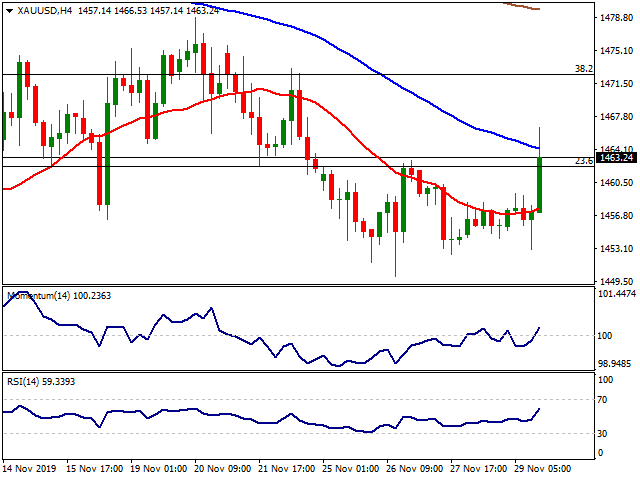 Silver followed the same fashion with Gold on Friday and managed to end the week at 17.00$ level. On the other hand, as the industrial need for Silver is more than Gold, the usual pattern of supply shortage against the demand might support the precious metal next year as each year between 2013 and 2018 Silver production failed to cover the demand. In this case, while a possible trade deal might pressure Gold because of its safe-haven etiquette, Silver prices might go high with the expectation of an increase in industrial production. 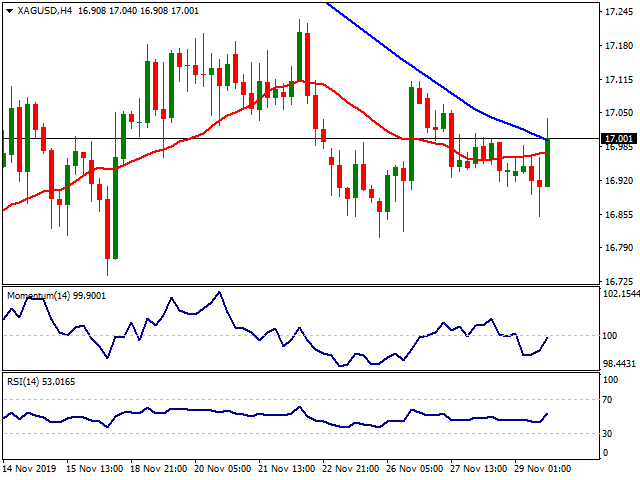 On Friday, Prince Abdulaziz bin Salman, Saudi minister of energy destroyed the party mood with his comments before the much awaited December 5th meeting in Vienna. It’s reported that Prince Abdulaziz bin Salman may voice concerns over the current OPEC supply cut deal and Saudi Arabia will no longer compensate for other members non-compliance. On the other hand, crude oil output by the OPEC fell 110,000 barrels per day (bpd) in November to 29.57 million bpd, a Reuters survey showed on Friday. "OPEC's biggest output drop in November was in Angola where production fell 140,000 bpd due to field maintenance," Reuters added. The oil trade might be extra volatile during the OPEC+ meeting while Saudi Aramco IPO is on the way too. 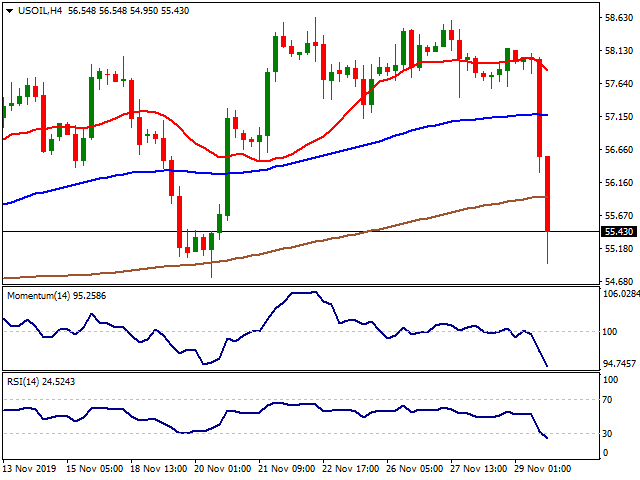 While the markets are capitalizing the positive developments regarding the trade deal the major US indexes are trading close to their all-time high levels ready for another rally. On the other hand, some negative developments such as the Hong Kong pro-democracy bill signed by Trump underpinning the positive moves. Last week, the US Q3 GDP showed a better than expected outcome supporting the rise of economic activities in the US. Also, FED’s beige book supported this outcome signalling the improvement of the economy with the Atlanta Fed raised its Q4 GDP estimate to 1.7% from 0.4%. This week, apart from the trade deal developments the markets will focus on the PMI and labour data set in the US. 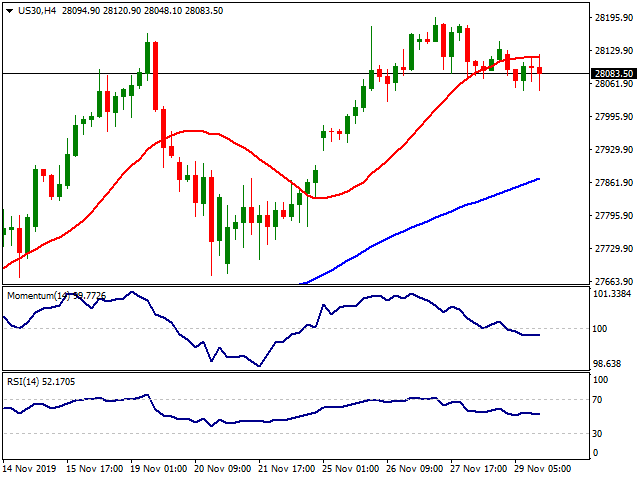