The EUR/USD pair has extended its advance to 1.1174, a fresh weekly high, but retreated from the level to settle above the 1.1150 price zone. The market mood turned sour at the beginning of the day, as fears of a hard-Brexit returned, alongside uncertainty around the US-China trade deal, as the market is waiting for details on what they have agreed to.

Data didn’t move the bar, as minor figures were out from both economies. The EU released October Trade Balance, with the seasonally adjusted surplus up to €24.5B. The US, on the other hand, published November Housing Starts and Building Permits, which surprised to the upside by rising 3.2% and 1.4% respectively. Industrial Production in the same month rose 1.1%, beating expectations, but Capacity Utilization contracted to 77.3%. This Wednesday, attention will be on the German IFO survey and EU November inflation data. The US macroeconomic calendar has nothing relevant to offer.

The EUR/USD pair has advanced above the 23.6% retracement of its December rally at 1.1145, but there was no follow-through. The risk remains skewed to the upside, according to the 4-hour chart, although the bullish potential is fading,  as, despite holding above a 20 SMA, the moving average has turned horizontal. Technical indicators in the mentioned chart remain directionless, the Momentum below its mid-line and the RSI at around 58, keeping the downside potential limited. The pair could resume its advance on a break above 1.1180, October high, and the immediate resistance. 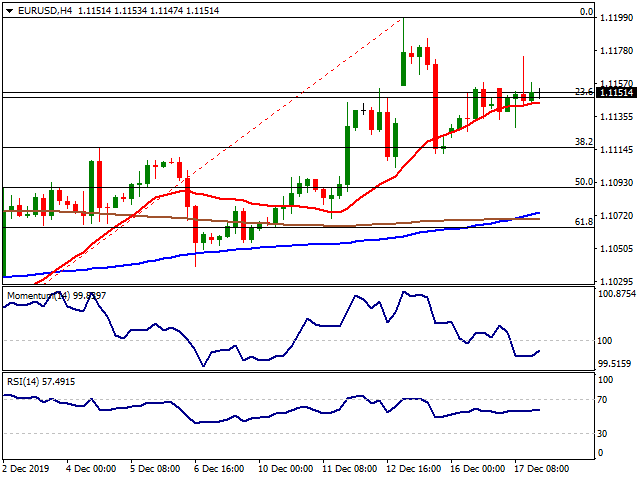 The USD/JPY pair is ending the American session with modest intraday losses around 109.45, after another failed attempt to advance beyond 109.72, December monthly high. A fading market’s optimism amid the absence of clarity about the US-China trade deal and mounting concerns about a hard-Brexit limited the upside for the pair. Equities were mostly able to post modest intraday gains, but it seems the financial world has paused ahead of fresh headlines related to the two most relevant market’s motors.

Tepid US data and quiet US Treasury yields kept the pair within familiar ranges. Japan didn’t release relevant data this Tuesday but is scheduled to publish its November Trade Balance early Wednesday, expected to print an adjusted deficit of ¥-93.6 B.

The short-term picture for the USD/JPY pair indicates that the risk has skewed to the downside, although the pair remains far above 108.90, the level that bulls are looking before deciding giving up. In the 4-hour chart, the pair is battling around a bullish 20 SMA, still heading north well above the larger one, while technical indicators eased, the Momentum now hovering around its mid-line and the RSI indicator stabilizing around 58. 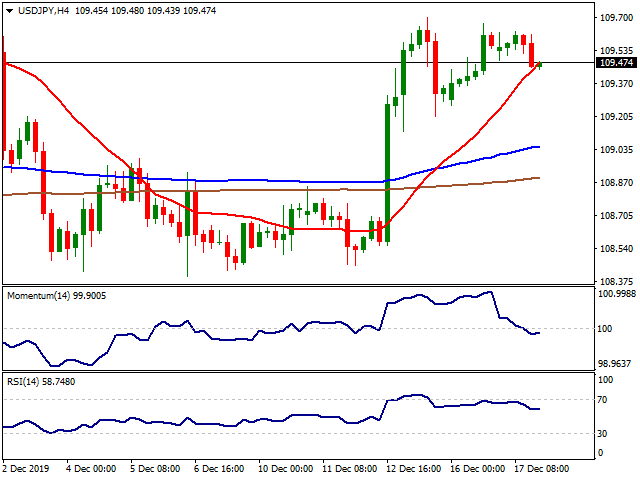 The GBP/USD pair plummeted this Tuesday, touching a low of 1.3098 and finishing the day a handful of pips above the 1.3100 figure. The collapse came after Downing Street announced plans to write into law that the UK will leave the EU in 2020 without allowing an extension of the transition period. The news revived concerns about a possible hard landing.

The UK released an update in employment data, which came in mixed, as the number of people claiming jobless benefits rose by 28.8K in November, against 25.4K previously, revised from 33K. The ILO unemployment rate for the 3-month to October resulted at 3.8% matching the previous reading but below expected. Finally, average weekly earnings excluding bonuses arrived at 3.5% 3Mo YoY, while the gauge, including bonus, came in at 3.5% 3Mo YoY, both slightly better than anticipated.

This Wednesday, the UK will publish November inflation figures. Monthly CPI is foreseen up by 0.2% after falling by 0.2% in October. However, yearly inflation is expected to come at 1.4%, slightly below the previous 1.5%. Core annual CPI is seen unchanged from its previous reading at 1.7%.

The GBP/USD pair has turned bearish after losing the 1.3300 threshold, retaining the negative stance, after plummeting below pre-election levels. In the 4-hour chart, the pair has fallen below a now bearish 20 SMA, barely holding above the 100 SMA. Technical indicators have stalled their slides near oversold readings, falling short of indicating bearish exhaustion. Chances of a bearish extension will decrease if the pair recovers beyond 1.3175, the immediate resistance. 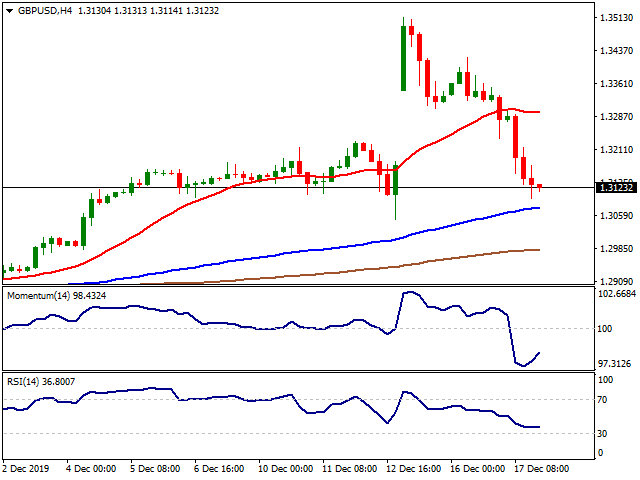 The AUD/USD pair is ending Tuesday with sharp losses near a daily low of 0.6837, following dovish Minutes from the Reserve Bank of Australia. The document highlighted the relevance of the February meeting, hinting a rate cut in Q1, with policymakers worried about the rate of wages’ growth falling short of expectations.  Furthermore, Australian Home Loans rose a modest 0.5% in October, missing the market’s expectations of 1.0%. Investment lending for Homes in the same month was up by 2.0%, better than the previous 1.1%.

The poor performance of equities limited chances of recovery. The upcoming Asian session will bring the November Westpac Leading Index, previously at -0.08%

The AUD/USD pair is at risk of extending its decline after breaking below the 0.6865 level, now a relevant static resistance level. In the 4-hour chart, the 20 SMA is gaining downward traction above the current level, as the price barely holds above directionless 100 and 200 SMA. Technical indicators have recovered modestly from near oversold readings, but lack strength enough to suggest the pair could recover further. 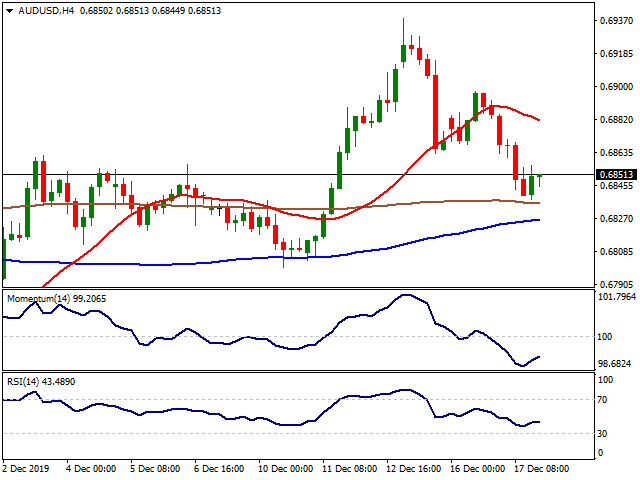 As the markets head to the new year holiday Gold had another lifeless trading session on Tuesday while Wall Street is inching new all-time highs and the USD index DXY holds its ground at 97 level. As the phase-one deal is done, the United States' agricultural sales to China is expected to double, US Trade Representative (USTR) Robert Lighthizer noted during an interview with Fox Business Network on Tuesday. Also, Lightizer noted that the US cant get global US trade deficit down without reducing the trade deficit with Europe. 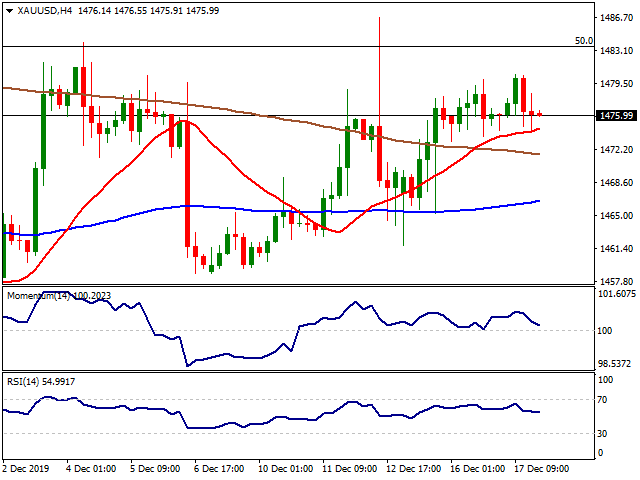 Silver also had a limited trading session on Tuesday as the markets are gearing up for the year-end holiday. As the markets digest the phase-one deal between the US and China, the risk sentiment is generally considered as positive as Wall Street posting new all-time highs. After six consecutive days of incline, Silver closed in a negative zone and lost 17.00$ level at the time of the writing. 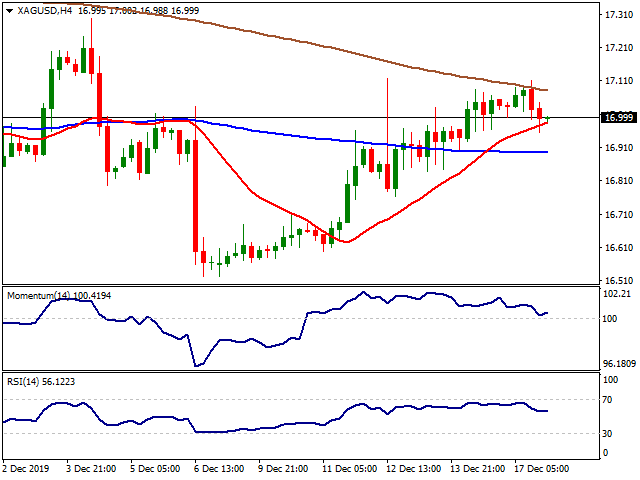 WTI is keeping its rally up for the fourth consecutive day testing new high levels since mid-September. Renewed optimism after the phase-one deal is supporting the black gold with the expectations of increasing demand for energy is also supported by the OPEC+ deal regarding further production cuts. Also, better than expected Chinese industrial production data supported the idea that energy demand might rise further in the upcoming months. 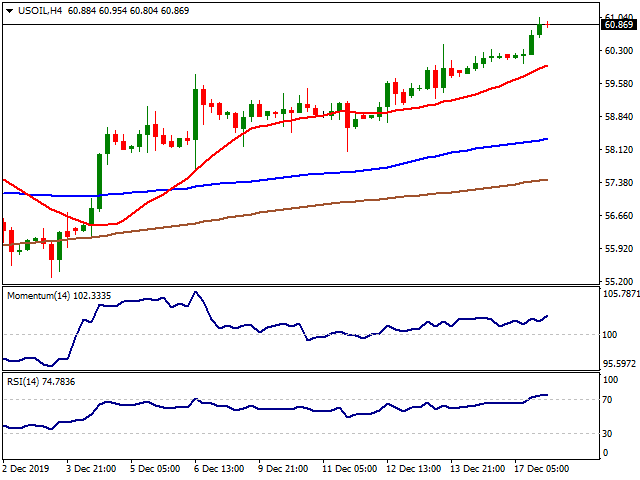 Despite the comments from the former Federal Reserve members regarding a potential financial crisis caused by lower interest rates and easing of banking regulations, Wall Street is eager to hold its position at all-time high levels. Dow Jones also keeping its trading range around its all-time high but the move up now looks like it lost its steam. On the other hand, although the phase-one deal is done, both parties still comment about the next steps. As the US agricultural goods sales to Chine is expected to be doubled, the US Trade Representative (USTR) Robert Lighthizer highlighted his concerns about the trade imbalance between Europe. 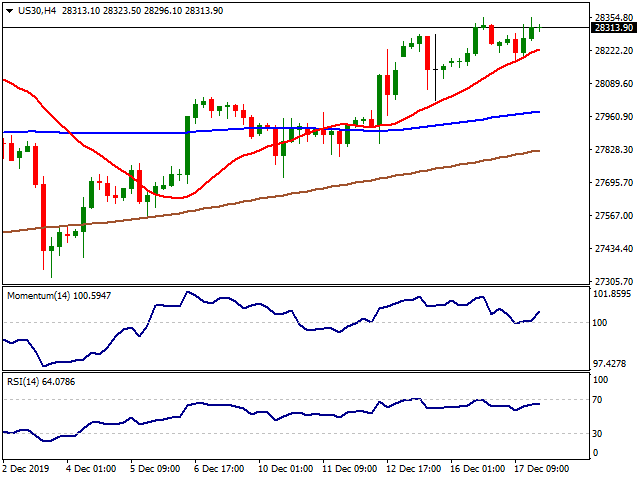