The EUR/USD pair is finishing Wednesday in the red, near a fresh weekly low of 1.1110, as the dollar’s benefited from persistent political uncertainties. After announcing phase one of a trade deal last Friday, China and the US haven’t provided much detail on what such deal implies, cooling down the initial optimism. Also, UK PM Johnson is determined to pull the UK out of the EU next year, reviving fears he may well trigger a hard-Brexit if required.

A scarce macroeconomic calendar helped to keep markets range-bound. Mixed German data failed to lean support to the shared currency, as the annual PPI resulted at 0.7% in November, missing the market’s expectations, although the ZEW Survey showed that Business Climate bounced in December, surpassing the market’s estimates with 96.3. The USD appreciated particularly against its European rivals. This Thursday, the EU won’t release relevant data, while the US will only publish the usual weekly unemployment data and Existing Home Sales for November.

The EUR/USD pair has turned bearish in the short term, as it hovers around the 38.2% retracement of its December rally at 1.1115, the immediate resistance, with 1.1065 coming at sight. This last has provided support/resistance in the last couple of weeks, while also stands for the 61.8% retracement of the mentioned rally. The 4-hour chart supports additional slides, as the pair is now developing below a bearish 20 SMA, while technical indicators have entered negative territory, maintaining modest downward slopes. 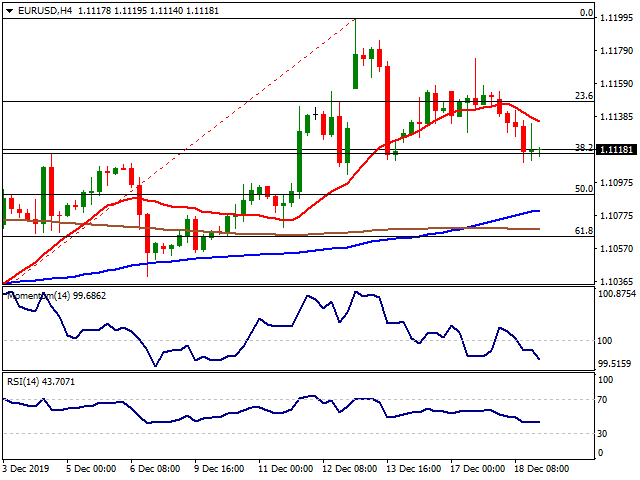 The USD/JPY pair recovered from a daily low of 109.39 to finish the day with gains, although within familiar levels. Concerns ruled the Asian session, providing support to the Japanese currency, although the market’s mood improved during London trading hours, skewing the scale in the dollar’s favour.  US Treasury yields advanced to fresh weekly highs, pulling the pair higher ahead of Wall Street’s close.

Japan published its November Merchandise Trade Balance at the beginning of the day, which came in better than anticipated with a deficit of ¥-82.1 B vs. the expected ¥-369 B. Exports were down 7.9%, better than expected,  although imports plummeted 15.7% much worse than the market’s forecast. The Bank of Japan will have a monetary policy meeting this Thursday, but as usual, it is expected to be a no-event.

The pair is at the upper end of this week’s range, still lacking directional momentum. In the 4-hour chart, the pair has managed to settle above a flat 20 SMA, while the larger moving averages maintain their upward slopes well below the shorter one. Technical indicators, in the meantime, remain flat but within positive levels. 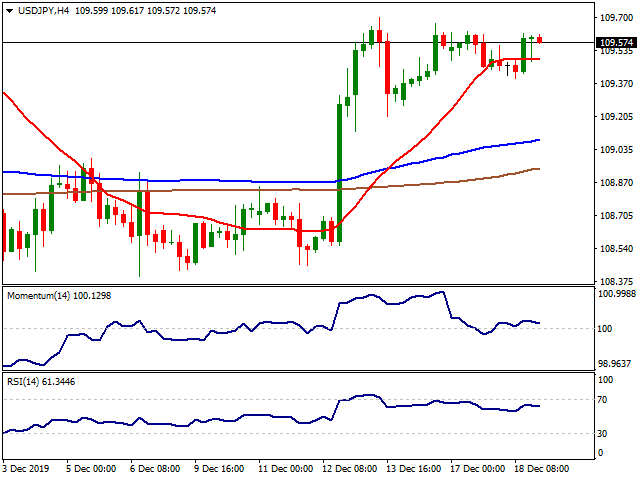 The GBP/USD pair remained under selling pressure, settling below the 1.3100 figure and nor far above a daily low of 1.3059. The UK published November inflation figures, which ticked up to 1.5% YoY in November, below the BOE’s target and in-line with its recent downtrend. The soft readings came in one day ahead of the central bank’s meeting, and the latest employment and inflation figures reinforce the precedent idea of an on-hold stance. Ahead of the event, the kingdom will publish November Retail Sales, foreseen up by 0.3% when compared to a year earlier.

Also, UK PM Johnson would announce his government’s legislative priorities this Thursday, with delivering Brexit at the top of the list. Ahead of the event, the PM spokesman said that the Withdrawal Agreement Bill will include provisions for lower British courts to overturn the European Justice Court's rulings.

The GBP/USD pair is technically bearish, with further declines likely on a break below 1.3050, December 12 daily low, and the immediate support. In the meantime, technical readings continue supporting a bearish extension, as, in the 4-hour chart, the pair is battling around its 100 SMA while the 20 SMA turned further south above the current level. Technical indicators lack clear directional strength but hold near oversold readings. 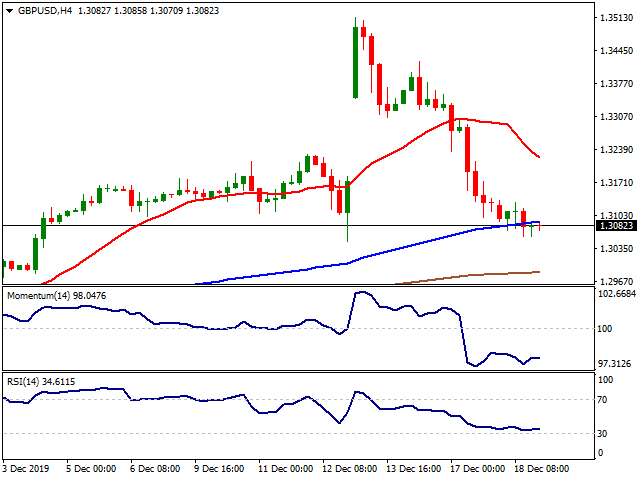 The AUD/USD pair is finishing the day unchanged around 0.6850, unable to attract investors. The pair fell at the beginning of the day, dragged by the Australian Westpac Leading Index, which continued signaling growth below trend. The index resulted in -0,09% in November, while the October reading was revised to -0.15%. The greenback seesawed between gains and losses in the second half of the day, strengthening within range against most major rivals, although the positive tone of Wall Street overshadowed its performance against the Aussie.

Australia will release November employment figures this Thursday. The country is expected to have added 14K new jobs in the month, after losing 19K position in October. The unemployment rate is expected to remain steady at 5.3%.

The AUD/USD pair is technically bearish according to the 4-hour chart, as an intraday attempt to recover ground was rejected by sellers aligned around a bearish 20 SMA. Technical indicators in the mentioned chart head lower within negative levels, in-line with a bearish extension, particularly if the pair breaks below 0.6830, the immediate support. 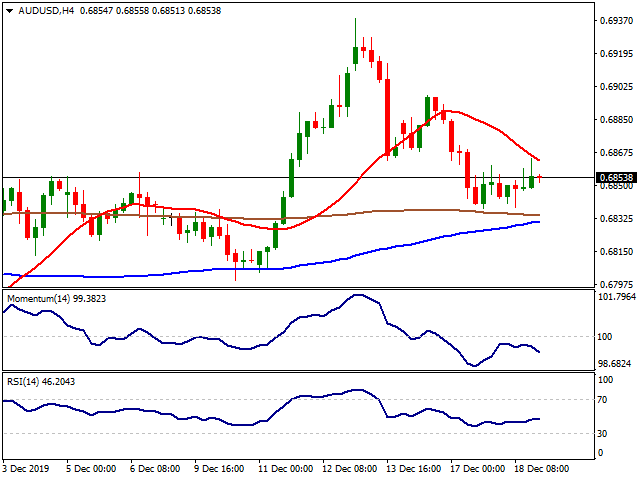 Risk-on mood and broad USD strength seen in the markets pressured the yellow metal on Wednesday trading. The USD index DXY headed towards mid 97 levels while Wall Street trading is mostly done around their all-time highs supported by the positive risk sentiment. As the phase-one deal is now clear, there are no significant risk drivers left until 2020 and as a result, trading is mostly done in a tight range for the risk assets. 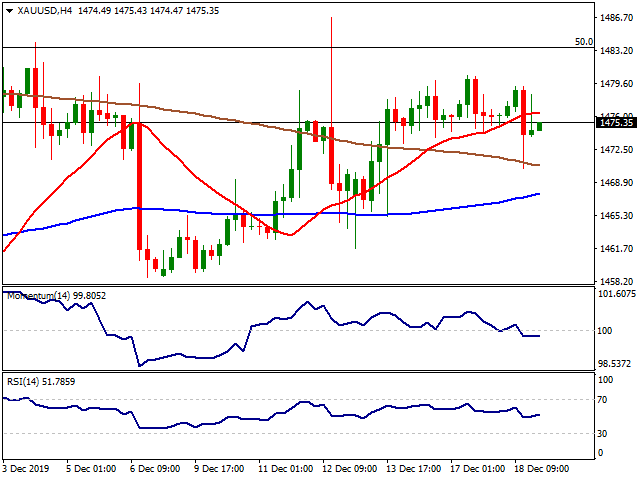 Silver also had another lifeless trading session on Wednesday trying to hold over 17.00$ level. On the precious metals front, while Palladium made history and market 2.000$ level, Gold is eager to hold over 1.470$ levels. For 2020, the result of FED’s dovish approach to interest rates which is clearly dependant on the inflation data might support the safe havens. Also, with its industrial demand, Silver might find an extra boost with the possibility of industrial production to pick up the pace. 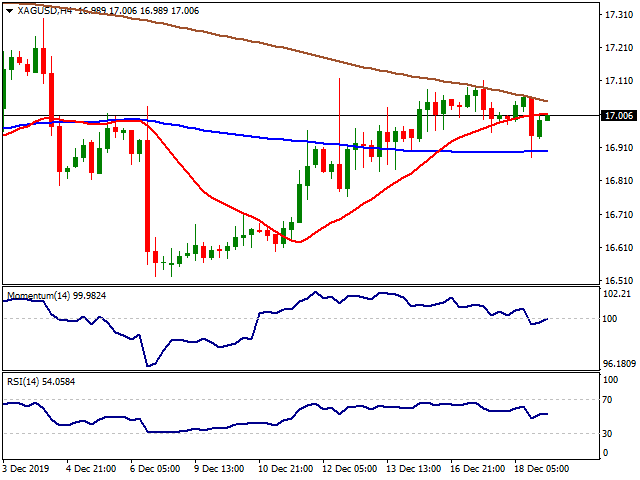 WTI is keeping its move north for the fifth consecutive day supported by the positive risk sentiment and also EIA stock data. The weekly report published by the US Energy Information Administration (EIA) on Wednesday revealed that crude oil stocks in the US declined by 1.1 million barrels in the week ending December 13th to 446.8 million barrels. Although this reading came in slightly lower than the market expectation for a draw of 1.3 million barrels, the WTI gathered bullish momentum with the improved risk sentiment. On the other hand, JP Morgan said it revised the average price forecast for WTI in 2020 to $60 from $57.50. 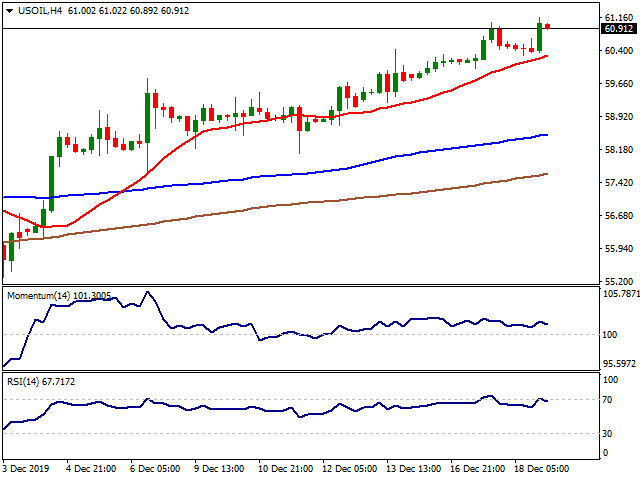 As the eventless trading week is about to end, Wall Street is keeping its momentum up with signs of exhaustion. Dow Jones is posting gains for the sixth consecutive day while the USD index DXY is also posting gains trading around mid 97 levels. On the other hand, the political unrest in the US might block further gains as the US House of Representatives is set to vote on two articles of impeachment against President Donald Trump 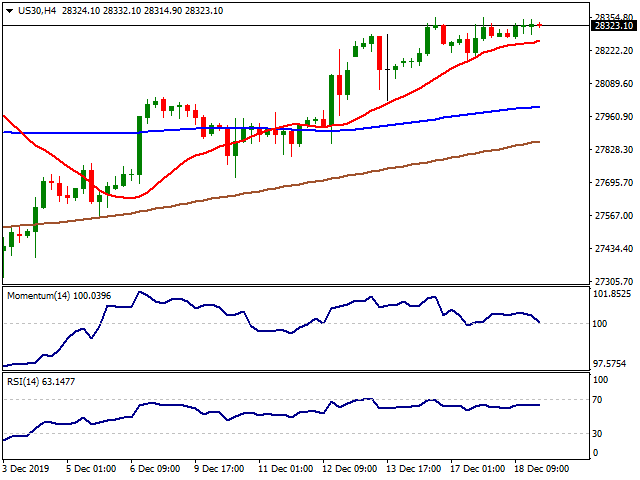