The EUR/USD pair peaked at 1.1210 early on Monday, a level that was last seen mid-August, as the broad dollar’s weakness was again the main theme across the FX board. Volumes remained thin amid winter holidays, while the calendar was quite scarce. The greenback recovered some ground during London trading hours, but resumed its decline with Wall Street’s opening, with the pair extending its advance up to 1.1220. Equities were down despite some encouraging news in the trade war front, as the Chinese trade negotiator, Liu He, will reportedly visit Washington this Saturday, most likely to sign phase one of the trade agreement. Indexes decline is likely linked to profit-taking ahead of the year-end.

The US just published November Wholesale Inventories, which came in flat, better than anticipated, and the trade balance for the same month, with the deficit down to $63.19B, also beating expectations. The December Chicago PMI was up to 48.9 vs. the 48 expected, while November Pending Home Sales rose 1.2%. The only negative note came from the  December Dallas Fed Manufacturing Business Index, which fell to -3.2 against the 1.5 forecast. The macroeconomic calendar has nothing relevant to offer this Tuesday.

The EUR/USD pair is trading near the mentioned high, retaining its bullish stance according to intraday technical readings. The pair has several relevant highs in the 1.1230/40 price zone, providing resistance, although the pair could easily break through the level in the current thinned market’s conditions. In the 4-hour chart, technical indicators head north, despite being in extreme overbought levels. The pair, in the meantime, continues advancing above all of its moving averages, with the 20 SMA heading firmly higher above the larger ones. 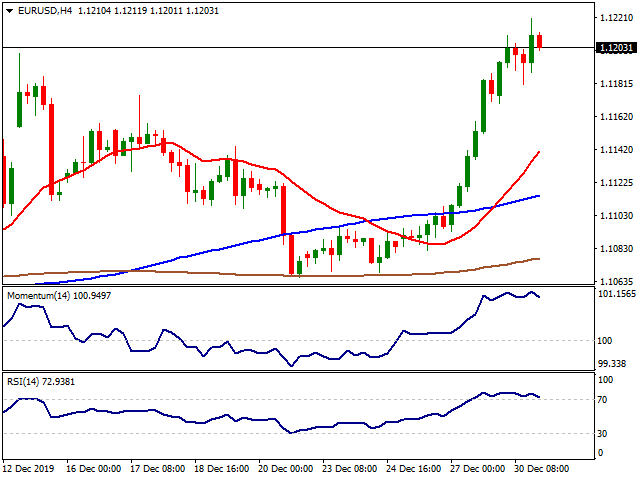 The USD/JPY pair has fallen to 108.76, its lowest since December 12, ending the day just below the 108.90 level. The pair was down on dollar’s weakness throughout the first half of the day, accelerating its slump with Wall Street’s opening, as US indexes were sharply down. US Treasury yields, however, surged in quiet trading, with the yield on the benchmark 10-year note peaking at 1.94%. The yield curve is widening, as fears of a US recession eased, which means that the current greenback’s decline could be considered seasonal, with the market set to experience some wild moves post-holidays.

The USD/JPY pair is bearish, according to the 4-hour chart, as the pair is comfortable below all of its moving averages, and with the 20 SMA accelerating south above the larger ones. Technical indicators, in the meantime, continue heading south despite being in oversold levels, favoring additional declines, mainly on a break below 108.60, now the immediate support. 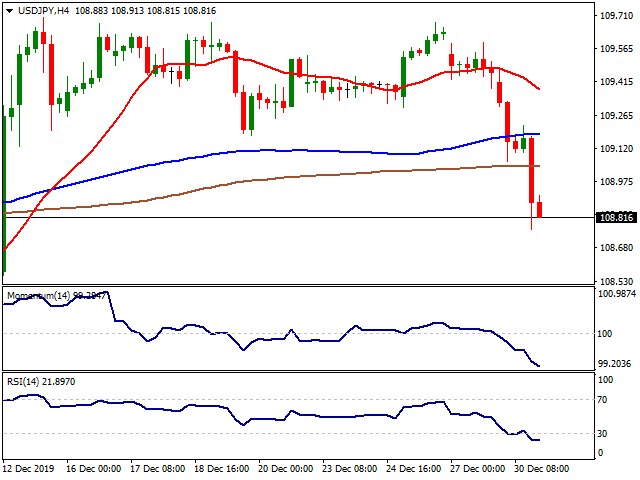 The GBP/USD pair benefited once again from the dollar’s weakness, with buyers putting aside Brexit concerns. The pair surged to 1.3150, its highest in two weeks. Market players are still concerned that PM Johnson’s decision to limit the transition period to December 2020 would end up in a hard-Brexit. Even EU authorities are worried about the short time spam left to arrange the future relationship between the UK and the EU. The UK Parliament will resume debating the Withdrawal Agreement Bill next Tuesday, with legislation aimed to pave the way for the departure on January 31st.  In the meantime, most markets will be closed until next Thursday, with no data scheduled for release in the UK.

The  GBP/USD pair is trading around the 38.2% retracement of its latest daily slump, measured between 1.3513 and 1.2904, at 1.3140. The short-term picture is bullish, as the pair is well above a now bullish 20 SMA, which already crossed above the 200 SMA, while the 100 SMA converges with the mentioned Fibonacci level and the current price. Technical indicators, in the meantime, grind higher within positive levels, lacking enough strength but anyway skewing the risk to the upside.  The bullish potential, however, remains limited by the mentioned Brexit concerns. 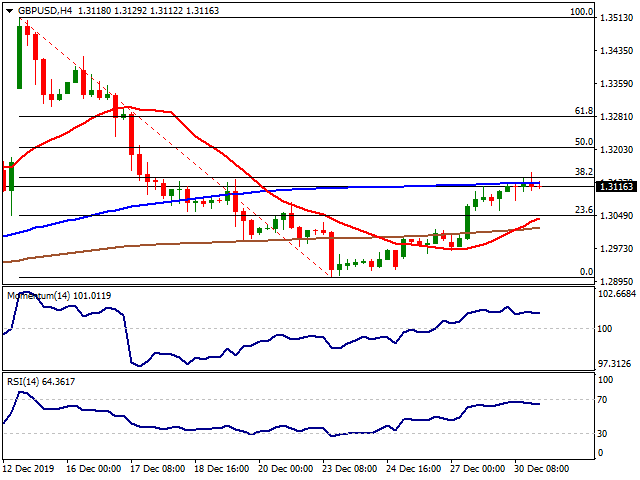 The AUD/USD pair reached the 0.7000 level for the first time since late July, advancing for the eighth consecutive day. The Aussie continues advancing on the back of the market’s optimism about the US-China trade deal while the dollar remains out of the market’s favor. This Monday, the pair found support on headlines suggesting that phase one of the trade deal will be signed next Saturday when a Chinese delegation will arrive Washington.

Australian markets will be closed on holidays, but China will release the official December Manufacturing PMI, foreseen at 50.1 against the previous 50.2 and the Non-Manufacturing PMI for the same month, expected at 53.6 from 54.4 in November. The reports could trigger sharp movements, mainly due to limited volumes in holiday trading.

The AUD/USD pair retains its bullish potential according to the 4-hour chart, where technical indicators consolidate in extreme overbought levels, falling short of indicating upward exhaustion. The 20 SMA maintains its bullish slope, providing support at around 0.6960, while the larger moving averages advance below it. July’s high at 0.7081 comes as the next relevant bullish target, with gains beyond it probably resulting in a steeper and continued advance. 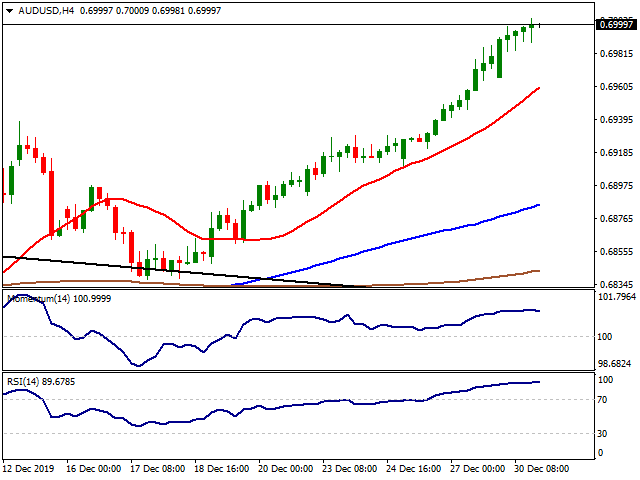 As the markets head to the end of 2019, Gold still keeping its 1.500$ level. Reports revealing US airstrikes against the Iranian-backed Kataib Hezbollah militia in Syria and Iraq over the weekend caused geopolitical tensions to escalate on Monday supporting the demand for the safe haven. According to Iranian state news agency IRNA, "US military aggression against Iraqi soil and Iraqi forces are strongly condemned as a clear example of terrorism," Iranian Foreign Ministry spokesman Abbas Mousavi said. On the other hand, year-end balance sheet adjustments pressured the USD and DXY slid below 97 levels. 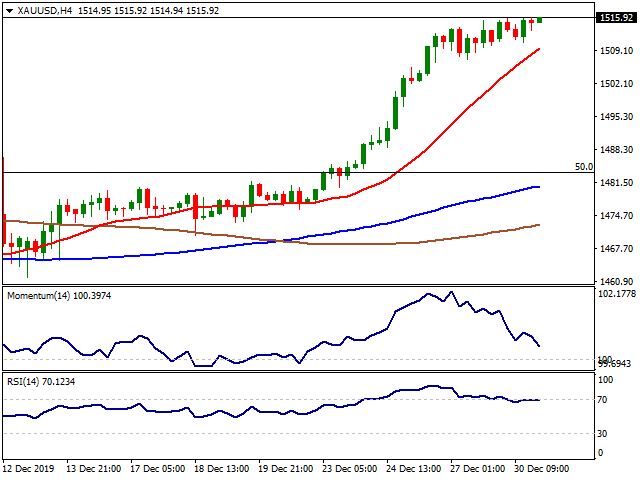 Silver gained traction on Monday trading and managed to erase its losses made on Friday after five consecutive days of incline. However, the white metal failed to break 18.00$ level at the time of the writing for a further move up. On the other hand, the demand for Silver related mining stocks seems to soar on Wall Street signalling further inclines might be in place. 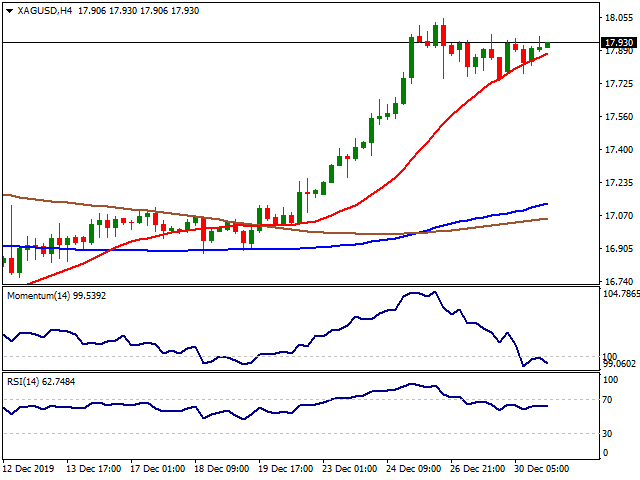 WTI tested over 62.00$ level with the escalating tensions in the Middle East but after that the profit-taking before the year-end took place and the black gold retraced back below 62.00$. The US targeted five locations in Syria and Iraq linked to Iranian backed militia seem to be providing a boost to oil prices on Monday. In response to the US' airstrikes, "US military aggression against Iraqi soil and Iraqi forces are strongly condemned as a clear example of terrorism," Iranian Foreign Ministry spokesman Abbas Mousavi said. Also, crude oil across the globe is still supported by the positive developments regarding the trade deal and also OPEC+ production cut deal. 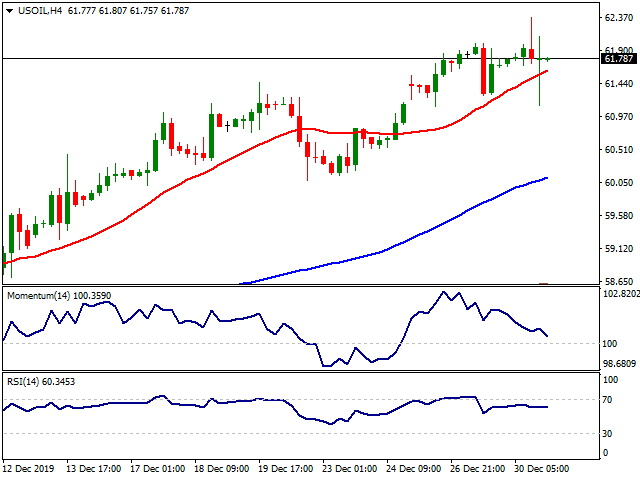 Wall Street retraced back on the first trading of the week before the year-end holiday as investors are willing to capitalize their earnings before the new year. The decline came although the positive news about phase-one deal hit the wires. Earlier in the day, the South China Morning Post reported that Chinese Vice Premier Liu He will travel to Washington on Saturday to sign the phase-one of the trade deal. Although this development provided a boost to the 10-year US Treasury bond yield, it failed to help stocks climb to fresh record highs. 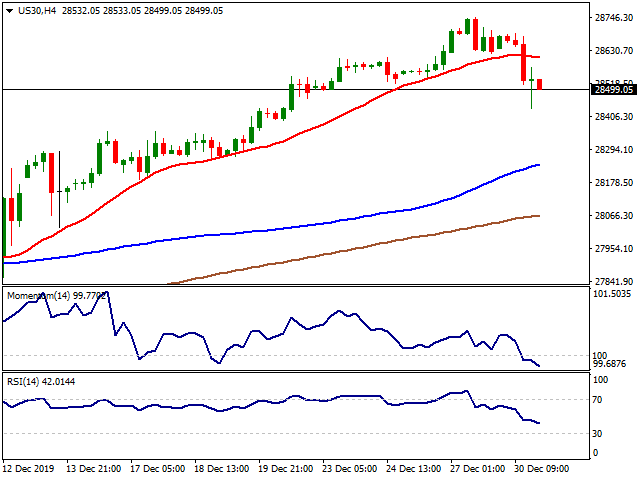 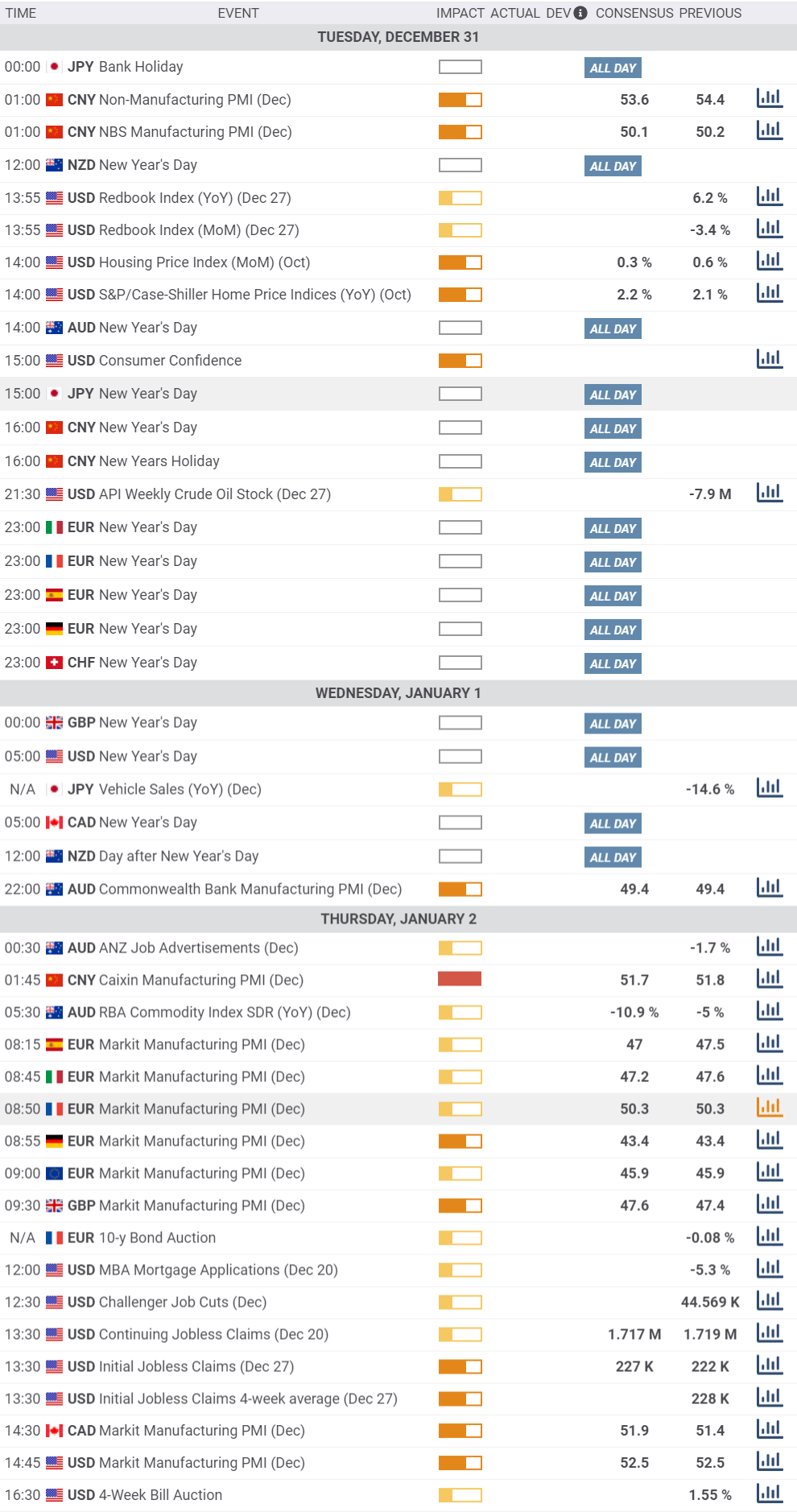