The EUR/USD pair finished the year at 1.1217, down for a second consecutive year, in spite of the dollar’s recent decline. The pair traded as high as 1.1238 on Tuesday, a level that was last seen in August, on the back of prevailing risk appetite, fueled by a tweet from US President Donald Trump, who announced that a “comprehensive Phase One Trade Deal with China” will be signed in the White House on January 15. Later in the day, Advisor Peter Navarro said that the phase one trade deal is “in the bank” and being translated and that more “great deals” are coming this 2020. The greenback was additionally weighed by the CB Consumer Confidence Index, which decreased in December to 126.5, as November reading was upwardly revised to 126.8.

Markets will slowly return from a two-day holiday this Thursday with Asia. Large gaps and wide moves, exacerbated by thin conditions, are not rare at this time of the year. Later in the day, Markit will publish the final versions of December Manufacturing PMI for the Union and the US, while this last will also publish the usual weekly jobless claims data.

The EUR/USD pair was up for a fourth consecutive day, with the risk still skewed to the upside, despite it has begun correcting short-term overbought conditions. The 4-hour chart shows that technical indicators head south, although yet far above their midlines, while the 20 SMA continues advancing well below the current level and above the larger ones. The pair has some relevant daily highs in the 1.1260 area, while the 23.6% retracement of its 2018/19 decline comes at 1.1270, making of the area a relevant resistance that once broken may result in a steeper advance. 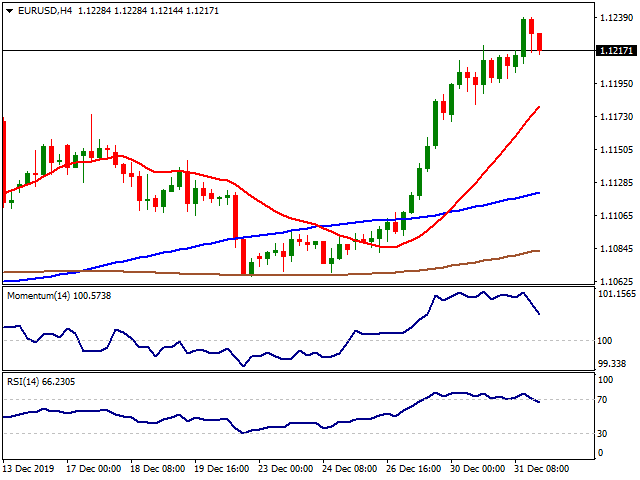 The USD/JPY pair recovered from a daily low of 108.46 on Tuesday, although the following recovery fell short of trimming daily losses, as selling interest remains strong ahead of the 108.90 resistance. The pair fell on the back of persistent dollar’s weakness, despite optimistic headlines that should have played against the safe-haven yen. During US trading hours, the US President, Donald Trump, announced through Twitter that phase one would be signed in Washington on January 15, while he will later head to Beijing to initiate the next round of negotiations. Wall Street managed to post some modest gains in the last trading day of the year.

Japanese markets have been closed on holidays, with activity resuming this Thursday. There’s no data scheduled for release in the country, although the pair could experience some strong volatility at the opening, with movements exacerbated by thin market conditions.

The USD/JPY pair has neared its December low at 108.39, and overall bearish, as it remains below the 108.90 level, a line in the sand for those trying to push the pair further lower. The 4-hour chart shows that the pair is currently below all of its moving averages,  with the 20 SMA heading firmly lower below the 100 SMA, both well above the current level. Technical indicators in the mentioned chart are bouncing modestly within extreme oversold levels, far from indicating an interim bottom. 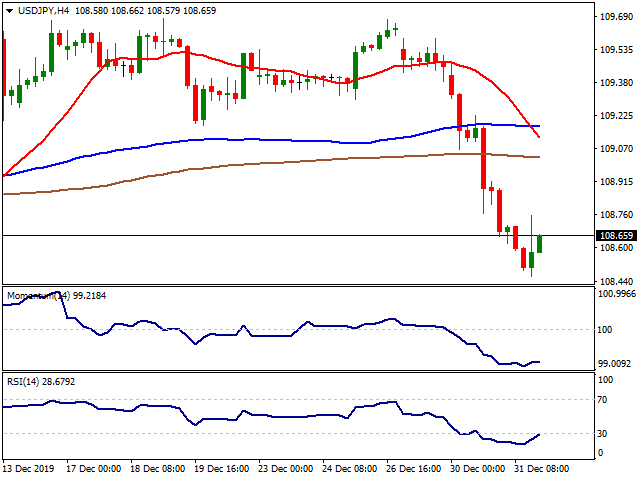 The GBP/USD pair has continued recovering on Tuesday to hit a daily high of 1.3284, settling not far below this last. The level, stands for the 61.8% retracement of its latest daily decline, measured between 1.3513, the high reached after UK PM Johnson’s victory on the general election, and the 1.2904 low hit after Johnson decided to limit the transition period to December 2020. The UK will see the release this Thursday of the final Markit Manufacturing PMI for December, foreseen at 47.6 vs. the previous estimate of 47.4

The GBP/USD pair is holding near the mentioned Fibonacci resistance, and with the upside favored in the short-term. The 4-hour chart shows that the pair is developing well above all of its moving averages, with the 20 SMA poised to recover above the 100 SMA both over 100 pips below the current level. Technical indicators have retreated from their highs, although the RSI holds within overbought levels. Beyond the mentioned high, the pair has room to extend its advance toward 1.3365, while the bullish potential should ease on a break below 1.3190. 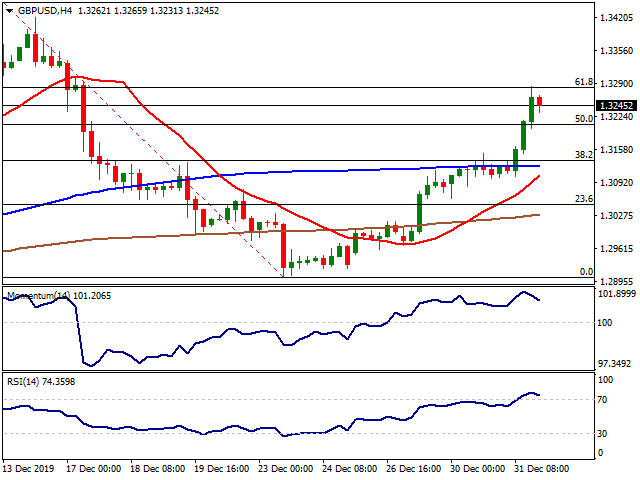 The AUD/USD pair closed the day at 0.7016, its highest settlement since mid-July, although ending the year with losses. The Aussie has been among the most benefited from the announcement of a trade agreement between the US and China, ignoring other factors that usually play against the commodity-linked currency. The pair advanced on Tuesday despite mixed Chinese data, as the official NBS Manufacturing PMI beat expectations in December by printing at 50.2. The Non-Manufacturing PMI, however, missed the market’s expected slide to 53.6 and came in at 53.5.

This Monday, China announced a 50 basis point RRR cut, effective January 5. The decision is aimed to inject liquidity and lower costs for business. The  announcement will likely boost the market’s sentiment at the opening. Also, the Asian macroeconomic calendar will include the December AUS Commonwealth Bank Manufacturing PMI, foreseen steady at 49.4, and the Chinese Caixin Manufacturing PMI for the same month, expected at 51.7 from 51.8 previously.

The AUD/USD pair is close to its monthly high at 0.7031 and poised to continue advancing. Nevertheless, and after closing in the green for nine consecutive days, the risk of a downward correcting is high. In the 4-hour chart, technical indicators are retreating from extreme overbought levels, yet far from suggesting a downward extension ahead. Also, the price is holding well above bullish moving averages, with the 20 SMA providing dynamic support at around 0.6960. 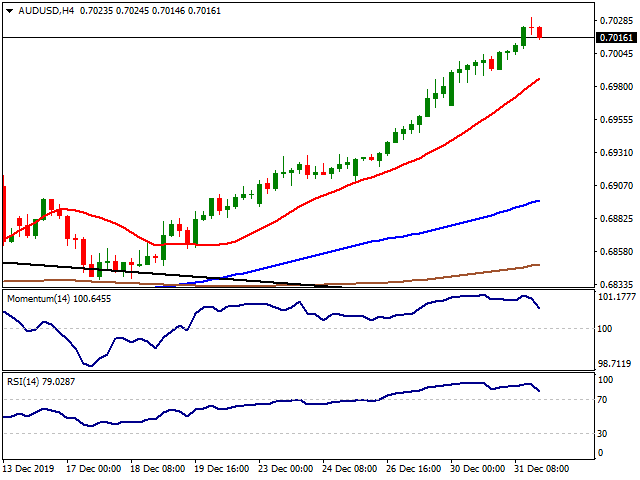 After spending most of the December in a fixed range, Gold lifted on the last week of the year ending the month with more than 50$ gain and around 250$ on a yearly basis which is the largest gain for a year since 2010. On the last trading day of the year, Gold tested 1.525$ but retraced back to 1.520 zone signalling further gains for the new year. Escalating geopolitical tensions in the Middle East with Iraqi protestors marching to the US embassy in Baghdad following the airstrikes in Iraq and Syria weighed on the market sentiment on Tuesday and helped the safe-haven gold find demand. On the other hand, year-end trade is still pressuring the USD index DXY supporting the incline seen in Gold trading. On the trade deal front, the Phase-One US-Sino trade deal will be signed at the White House in Washington on January 15, according to President Donald Trump. He tweeted that high-level Chinese representatives will attend the ceremony. The president also said that he will later travel to Bejing to kick off the second phase of trade talks. 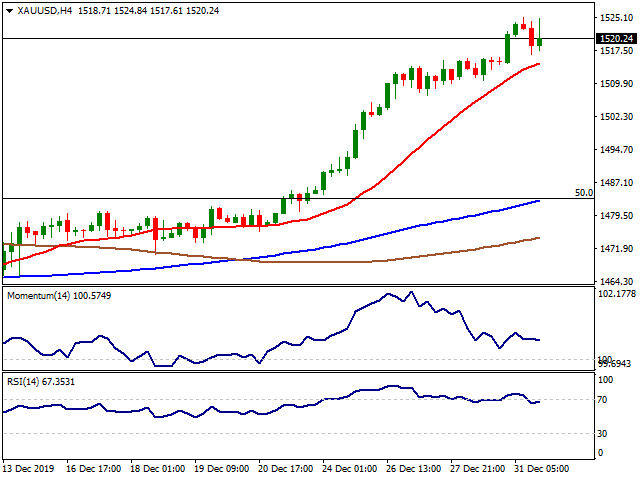 Silver tested over 18.00$ on the last trading day of the year but failed to build a ground over the physiological level and retraced back. However, the white metal managed to finish the day a tick in the positive area which has seen last time on the first week of November. The trading volumes are expected to be low until the end of the week due to year-end holiday and on the second week of January, it is expected for markets to return to their form. 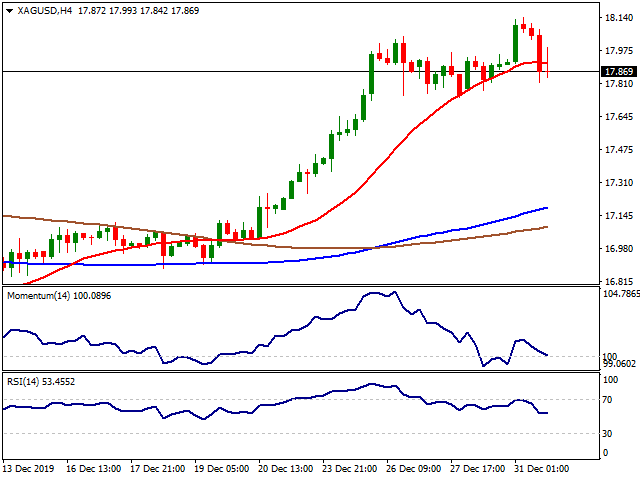 WTI unexpectedly retraced below the 62.00$ level on Tuesday trading although rising tensions in the middle east should support the oil prices. Following the US' airstrikes in Syria and Iraq, protestors in Iraq set fire to the US embassy in Baghdad. Responding to this event, "Iran is orchestrating an attack on the US embassy in Iraq," US President Trump tweeted out and added: "They will be held fully responsible. In addition, we expect Iraq to use its forces to protect the Embassy, and so notified!". In the case of further events happening in Iraq, which is an OPEC producer with around 4.6 million barrels of production per day the oil prices might go higher. 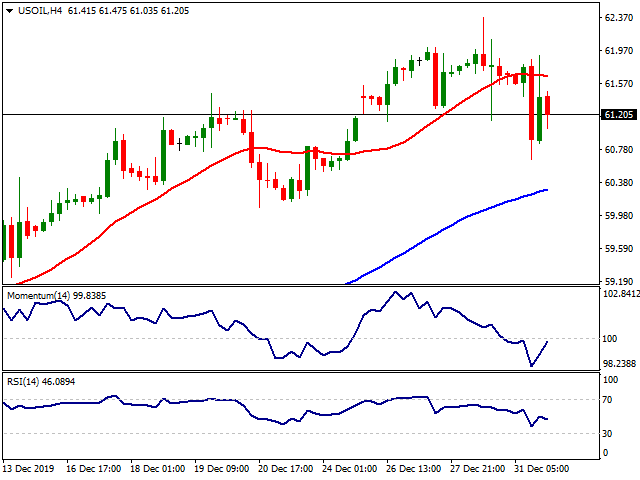 As the US President Trump said that on the 15th of January they will organise a ceremony to sign the phase-one deal with China and start talking about the second-phase, positive market sentiment carried Dow Jones slightly higher on the new year eve trading. On the other hand, rising tensions in the middle east seem not affecting the risk sentiment for indexes up to now. As the markets are expected to return to their usual trading volumes for the next week, traders will start the year with labour data set from the US. 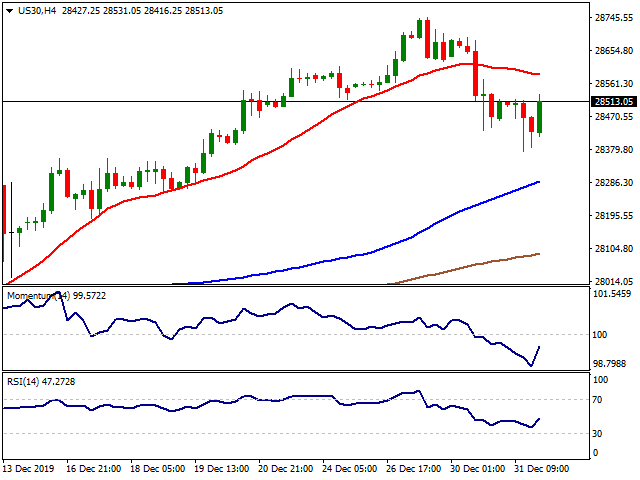