The American dollar stands victorious in this second day of the week, posting gains against most major rivals. The EUR/USD pair peaked at 1.1194, now heading into the Asian opening trading a few pips above its daily low of 1.1133. The market ignored easing risk-aversion and encouraging EU data, as the Union’s Retail Sales were up in November by 1.0% MoM and by 2.2% YoY, while the preliminary estimate of December inflation came as expected, with the CPI up by 1.3% YoY.

The dollar strengthened further in the American afternoon, as the ISM Non-Manufacturing PMI improved to 55 in December from 53.9 in November, beating the market’s expectation of 54.5. Factory Orders in the country decreased by less than anticipated, down by 0.7% in November.

Meanwhile, the US and Iran continued to exchange menaces, although the market seems to have paid no new attention to those. This Wednesday, Germany will release November Factory Orders, while the EU will publish its December Economic Sentiment Index. In the US, the only relevant figure will be the ADP survey on private jobs’ creation ahead of the Nonfarm Payroll report on Friday.

The EUR/USD pair is currently challenging the 61.8% retracement of its late December rally, offering a neutral-to-bearish stance in the short-term. In the 4-hour chart, it is developing below a bearish 20 SMA while crossing a directionless 100 SMA. The Momentum indicator keeps hovering around its mid-line, while the RSI turned south, currently at 37. The decline would likely accelerate on a break below 1.1120, where the pair bottomed at the end of last week. 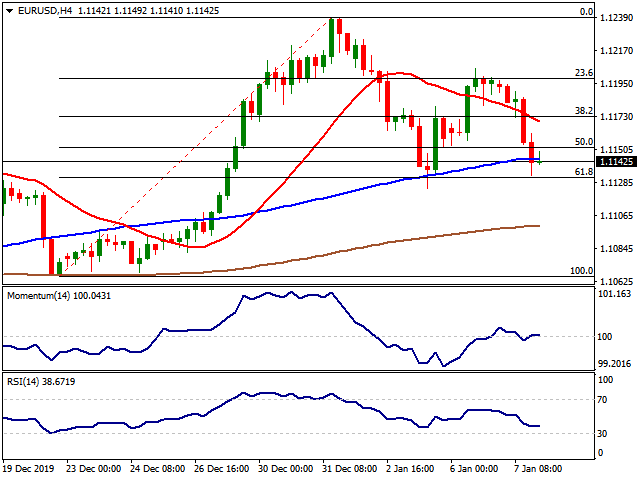 The USD/JPY pair advanced for a second consecutive day, ending the American session with modest gains at around 108.50. The American currency recovered alongside equities, on relief tensions between the US and Iran didn’t escalate further. US Treasury yields also recovered, underpinned by upbeat US data. The yield on the benchmark 10-year note popped to 1.82%, settling not far below this last. Threats between the US and Iranian leaders continued, although the market has put them aside, at least for now.

Japan’s Monetary Base was up by 3.2% YoY in December, according to the official report released at the beginning of the day, although the Jibun Bank Services PMI fell in the same month to 49.4, missing the market’s expectations and below the previous 50.3. This Wednesday, the country will only release November Labour Cash Earnings.

The USD/JPY pair is trading a few pips above the 38.2% retracement of its latest decline, but the upside potential continues to be limited, as investors are ready to resume safe-haven buying if tensions re-escalate. In the 4-hour chart, the pair advanced above a bearish 20 SMA but remains far below the larger ones, while the Momentum indicator eases within positive levels, and the RSI stands directionless at neutral levels. 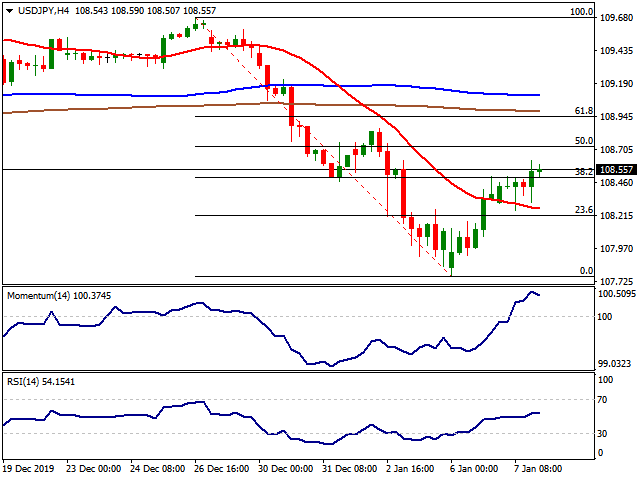 The GBP/USD pair peaked at 1.3212 this Tuesday, as the Pound surged during London trading hours but ended up giving up to the dollar’s strength. The focus is turning back to Brexit, as the Parliament returned from the Christmas holidays and is preparing to vote on PM Johnson´s withdrawal deal. The market believes that, given Tories’ victory in the latest general election, the exit bill won’t found opposition and would pave the way for the departure this month. Policymakers have started debating the bill, and are set to vote on it next Thursday.

The UK calendar will remain scarce this Wednesday, as the kingdom will only release the Halifax House Prices report.

The GBP/USD pair closed the day in the red but posted a third consecutive higher high and higher low, which limits the downside potential of the pair. It is currently trading just below the 38.2% retracement of its latest daily decline at 1.3150, the immediate resistance. In the 4-hour chart, the price is converging with the 20 and 100 SMA, with the shortest gaining bearish strength. Technical indicators, however, have managed to turn high around their midlines, also indicating the absence of selling interest. 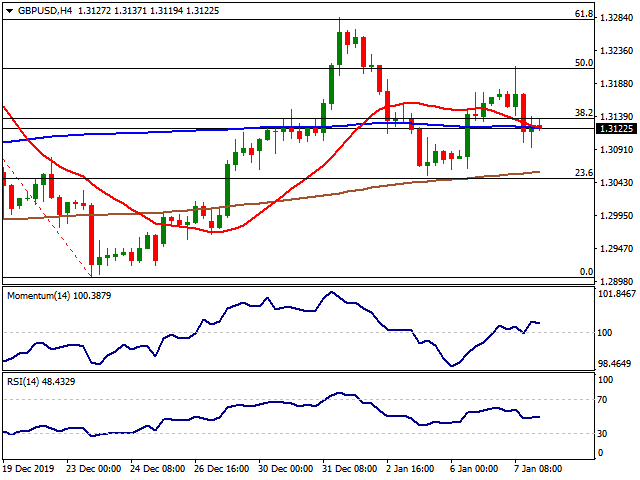 The Australian dollar was the worst performer this Tuesday, falling against the greenback to 0.6858, barely bouncing from the level ahead of the close. Australian data released at the beginning of the day didn’t help, as the ANZ Job Advertisements fell by 6.7% in December after dropping 1.8% in November. Nevertheless, the better performance of high-yielding assets should have provided support to the Aussie, which they not. Commodities retreated after rallying on risk aversion, usually a negative factor for the Australian currency.  This Wednesday, Australia will release November Building Permits, seen up by 2.0% MoM following an 8.1% decline in October.

The AUD/USD pair is technically bearish, and nearing 0.6838, the low from December 18. In the 4-hour chart, the 20 SMA heads sharply lower just above the 100 SMA, while the price now battles with the 200 SMA. Technical indicators hold within oversold levels with modest bearish slopes, anyway indicating that selling interest remains strong. The main support, and a probable bearish target is 0.6770. 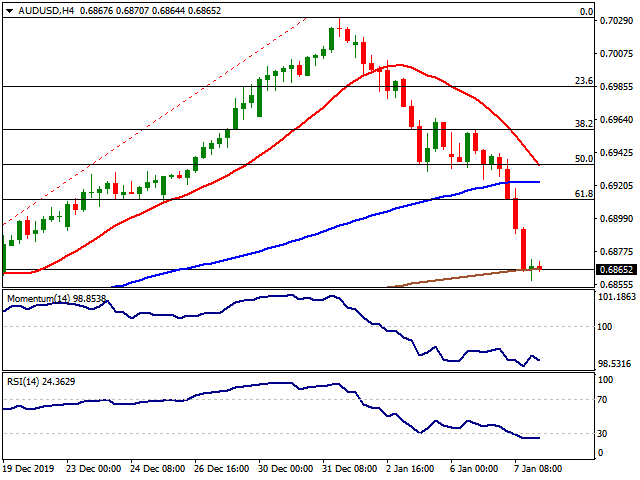 Gold is still keeping its uptrend which started around late April 2019 although some retracement was seen between September-December 2019 due to positive developments regarding the phase-one trade deal. This time the rising tensions between the US and Iran is the main driver for the risk sentiment supporting capital flows to the safe haven. On the other hand, if we look at the bigger picture, showing signs of life in inflation data and expectations of stable central banks who might even lower the interest rates for 2020 are also supporting the yellow metal fundamentally. 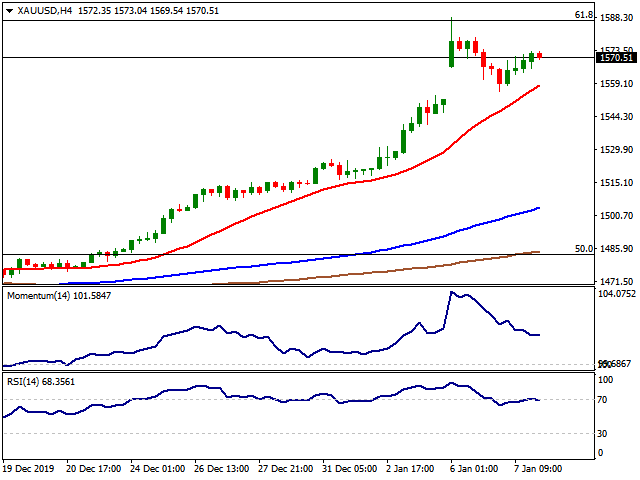 Silver, as usual, followed the same trend and kept its way up north testing previous day’s highs. In general, Silver had a good year in 2019 alongside Gold rally for safe-haven purposes and a possible rise expected in demand side due to industrial usage. On the consumer side, India’s Silver import declined %40 on a yearly basis in 2019 Agriculture and rural distress has hit demand for Silver. The precious metal’s imports fell from 150.7 metric ton (MT) in 2018 to 89.9 (MT) in 2019. 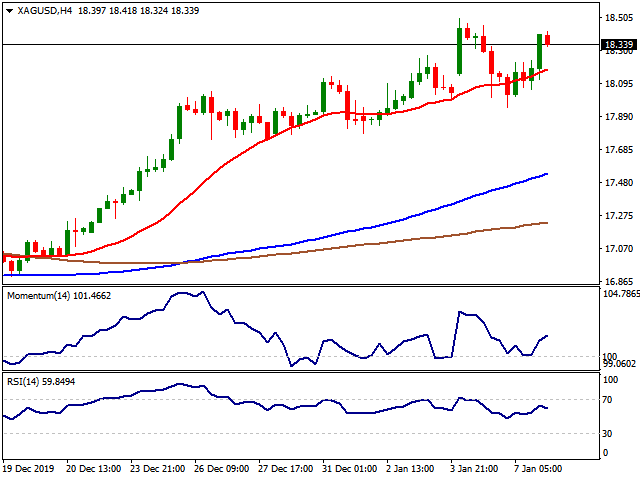 WTI had a big day up on last Friday supported by the rising tensions in middle-east but signs of de-escalation of the events now letting traders to ease their positions. WTI finished both Monday and Tuesday trading in the negative zone sliding below 63.00$. However, rising tensions in Libya and Iraq might be on the podium as an addition to risk sentiment and alongside OPEC+ supply cuts will likely to push the oil prices higher in 2020. On Tuesday, Chevron joined Exxon withdrawing their personnel from Iraq. 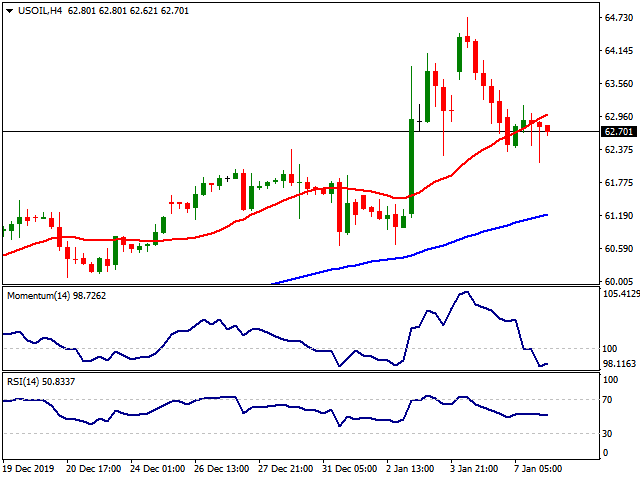 Dow Jones in a wait and see mode trading still around its all-time levels. The risk-off mode caused by the rising tension in middle-east pinned the indexes for a further move up. However, on Tuesday, rumours that Warren Buffet might be interested in buying Boeing protected the index for further declines. On Thursday, regional FED president’s speeches will be followed by the markets ahead of first NFP data of 2020 on Friday. 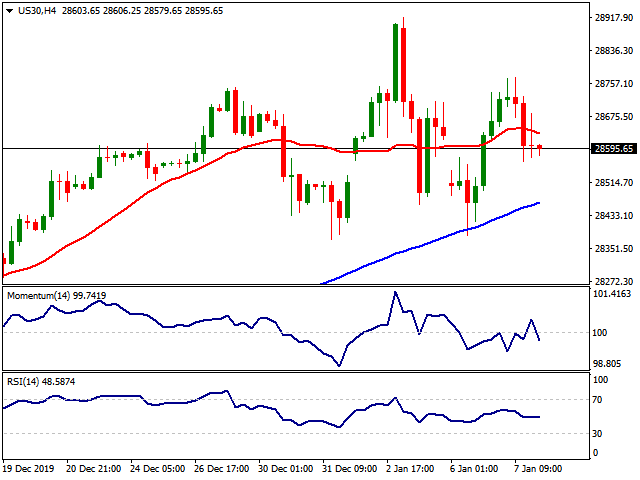