The greenback continued to appreciate Thursday, resulting in the EUR/USD pair losing the 1.1100 level for the first in two weeks. The shared currency attempted to recover some ground during London trading hours, helped by mostly encouraging German data, although the pair resumed its decline with Wall Street’s opening with the American dollar reaching fresh daily highs against most major rivals. Ebbing concerns about the conflict in the Middle-East was the reason behind the dollar’s gains.

Germany released the November Current Account, which was up by €24.9B, while Industrial Production in the same month, rose by 1.1% when compared to October. The yearly reading declined by 2.6%, better than the -3.8% forecasted. The Trade Balance surplus, however, declined to €18.3B, missing the market’s expectations. The US released initial jobless claims for the week ended January 3 which came in at 214K beating the 220K expected.

This Friday, the US will release December employment data. The country is expected to have added 164K new jobs, after gaining 226K positions in November. The unemployment rate is seen unchanged at 3.5%, as well as the participation rate foreseen at 63.2%. Average Hourly Earnings are seen up by 0.3% MoM and by 3.1% YoY, pretty much unchanged when compared to the previous month.

The EUR/USD pair is trading below the 61.8% retracement of its latest daily advance at around 1.1135, with bears on the drivers’ seat as long as the price remains below this level. The short-term picture is bearish, as, in the 4-hour chart, the pair continued developing below its 20 and 100 SMA, while now battling the 200 SMA. Technical indicators hold within negative levels and close to oversold readings, reflecting sellers’ dominance. 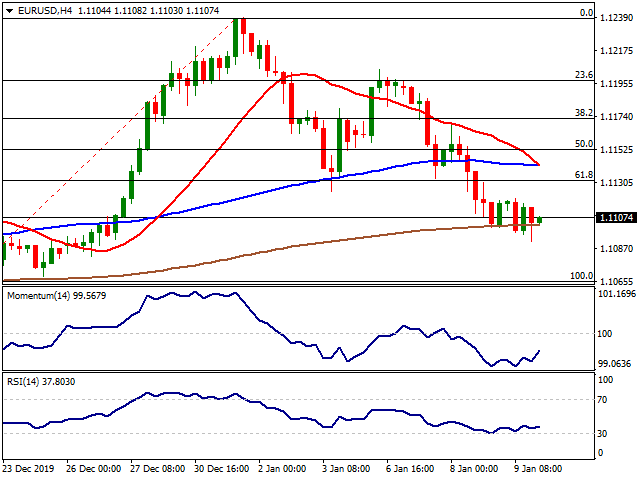 The USD/JPY pair extended its advance to 109.57, a fresh weekly high, amid the persistent upbeat mood. US Treasury yields continued to advance but retreated ahead of the close to finish the day unchanged. Nevertheless, the Japanese currency remained under pressure as speculative interest favoured high-yielding assets. The pair made most of its gains during the first half of the day, with bulls unable to find a catalyst to keep pushing it higher.

Japan will release the November Overall Household Spending early Friday, foreseen at 2.5% vs. the previous -5.1%. The country will also release the preliminary estimate of the November Leading Economic Index, expected at 90.6 from 91.6. The Coincident Index for the same month is expected at 93.2 against the previous 95.3. More relevantly, the US will release its Nonfarm Payroll monthly report later in the day.

The USD/JPY pair retains its positive tone although further gains will depend on the upcoming US monthly employment report to be out this Friday. In the 4-hour chart, the pair remains well above all of its moving averages, with the 20 SMA having extended its advance below the larger ones. Technical indicators lack directional strength, consolidating within overbought levels.  The key resistance continues to be the 109.70 area, where the pair met sellers multiple times throughout December.

The GBP/USD pair plummeted to 1.3012, losing roughly 100 pips on the back of comments from BOE’s Governor Carney. Speaking at a conference titled “the future of inflation targeting,” Carney said that the central bank has plenty of room for significant easing, indicating that the bank has the equivalent of 250 basis points of policy space. Although he added that there has been some reduction in Brexit-related and domestic policy uncertainties, the overall dovish tone weighed on Sterling.

The UK released the BRC December sales, which rose by 1.7%, below the 2.0% expected but better than the previous -4.9%. Meanwhile, the House of Commons is expected to approve the UK’s departure from the EU at the end of the month, without the usual drama for the last months. Once passed, the bill will go to the House of Lords.

The GBP/USD pair recovered from the mentioned daily low and trades around 1.3065. The pair is bearish in the short-term, as, in the 4-hour chart, it’s developing below all of its moving averages, while technical indicators recovered within negative levels but quickly lost strength upward. The pair has room to extend its decline toward 1.2970 a strong static support level. The pair would need to recover beyond 1.3140 to change course, quite unlikely in the current scenario. 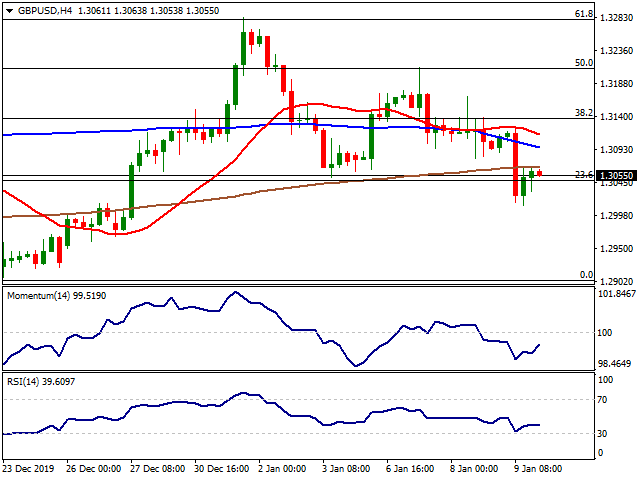 The AUD/USD pair spent the day within Wednesday’s range, ending the day just a few pips above its weekly low of 0.6848. The Aussie advanced during Asian trading hours, although its gains were moderated as the Australian November trade balance posted a surplus of 5.8B, better than the previous 4.5B although slightly below the expected 5.9B. Exports were up by 2.0% in the month, while imports declined by 3.0%. China released December inflation figures, with the annual CPI up by 4.5%, matching the previous reading but below the expected 4.7%.

This Friday, the country will release the December AIG Performance of Services Index, previously at 53.7, and November Retail Sales, seen increasing by 0.4%.

The AUD/USD pair is at the lower end of its latest consolidative range, which keeps the risk skewed to the downside. A relevant low and the immediate support comes at 0.6840, with a break below the level indicating a downward extension toward 0.6770. Technical readings in the 4-hour chart favor such decline as the pair is now developing below all of its moving averages, as the RSI indicator consolidates at around 31. 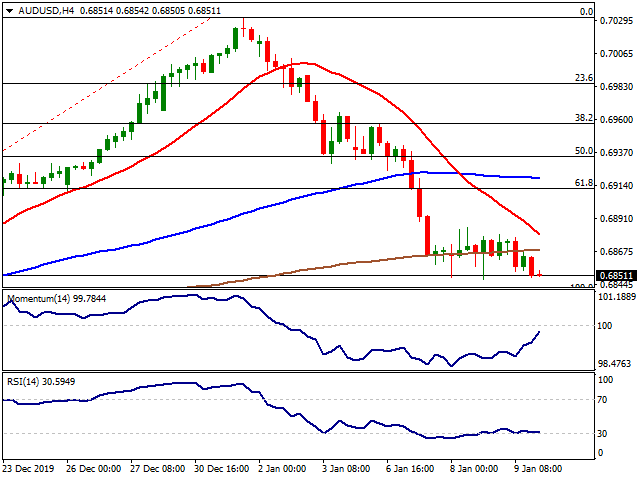 Gold kept its move down and retraced back to pre=US=drone strike levels as Trump kept his cool after the Iranian counter missile strike. US President Donald Trump’s address to the nation which was well balanced between, we don't want war, nor does Iran, but we will sanction Iran for misbehaving. Seems like the markets eased the fears of a bigger conflict and risk appetite is picking momentum again after the eventful week. On Friday, all the market attention will be at this year’s first NFP data set. Along with strong data results, USD might pick up the pace and therefore Gold might be under extra pressure downside. 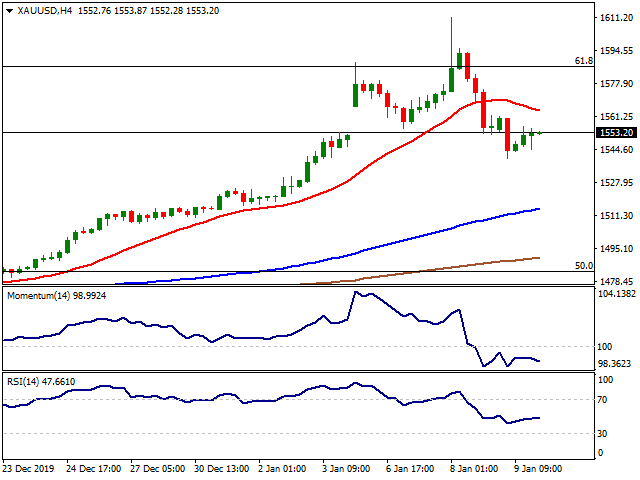 Silver slid below 18.00$ level as the tensions ease in the middle east. As 2020 started with extreme events such as the conflict between the US and Iran, risk sentiment shifted extremely quick as Trump’s dovish response to Iran’s counter-attack. Seems like the US and Iran conflict will be the main risk driver for precious metals as markets passed away the news regarding the phase-one deal between the US and China. 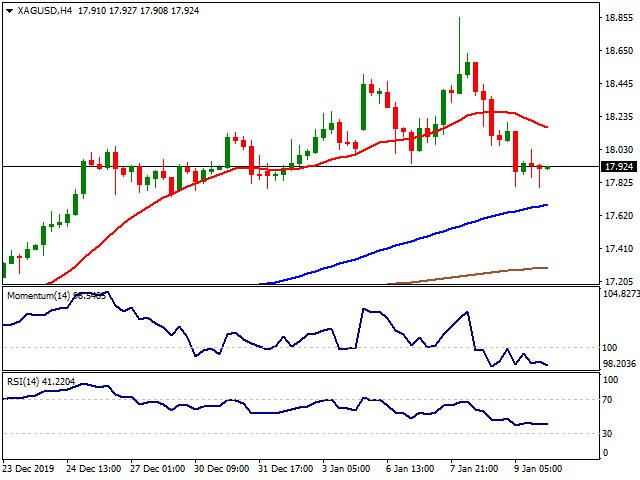 De-escalation of the US and Iran conflict still weighs on oil prices as WTI slid below 60.00$ level keeping its sharp decline on Thursday trading. On the other hand, the weekly report published by the US Energy Information Administration (EIA) on Wednesday revealed that crude oil stocks in the US increased by 1.164 million barrels in the week ending January 3rd to further weigh on crude oil prices. On Friday, Baker Hughes' Oil Rig Count will be followed by the oil traders as usual as weekly data. 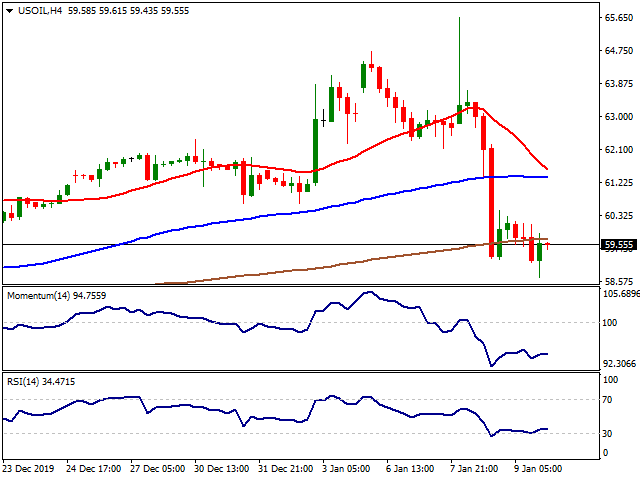 Risk assets are still cheering up the easing tensions between the US and Iran for now. Wall street started Thursday trading with refreshing their all-time high levels while the CBOE Volatility Index, Wall Street's fear gauge, is down more than 3% on the day. However, there is still no solid resolution to the rising tensions. Trump already stated that instead of the military solution, he prefers to weigh on extra sanctions to Iran. Also, rumours started to circulate that a possible Iran missile might down the Ukraine airliner right after Iran’s counter-attack on US bases. Apart from the extraordinary geopolitical developments, markets will focus on the NFP data tomorrow. The ADP National Employment Report on Wednesday showed private payrolls jumped by 202,000 jobs last month, the largest gain since April, after an upwardly revised 124,000 rise in November. Private job growth averaged 163,000 jobs per month in 2019, slowing from an average increase of 219,000 in 2018. The upbeat data set is a preliminary indicator of a strong NFP reading which might boost the risk sentiment on the positive side. 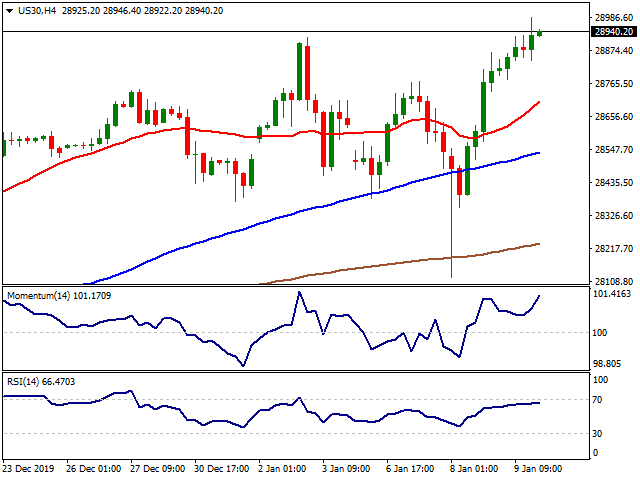 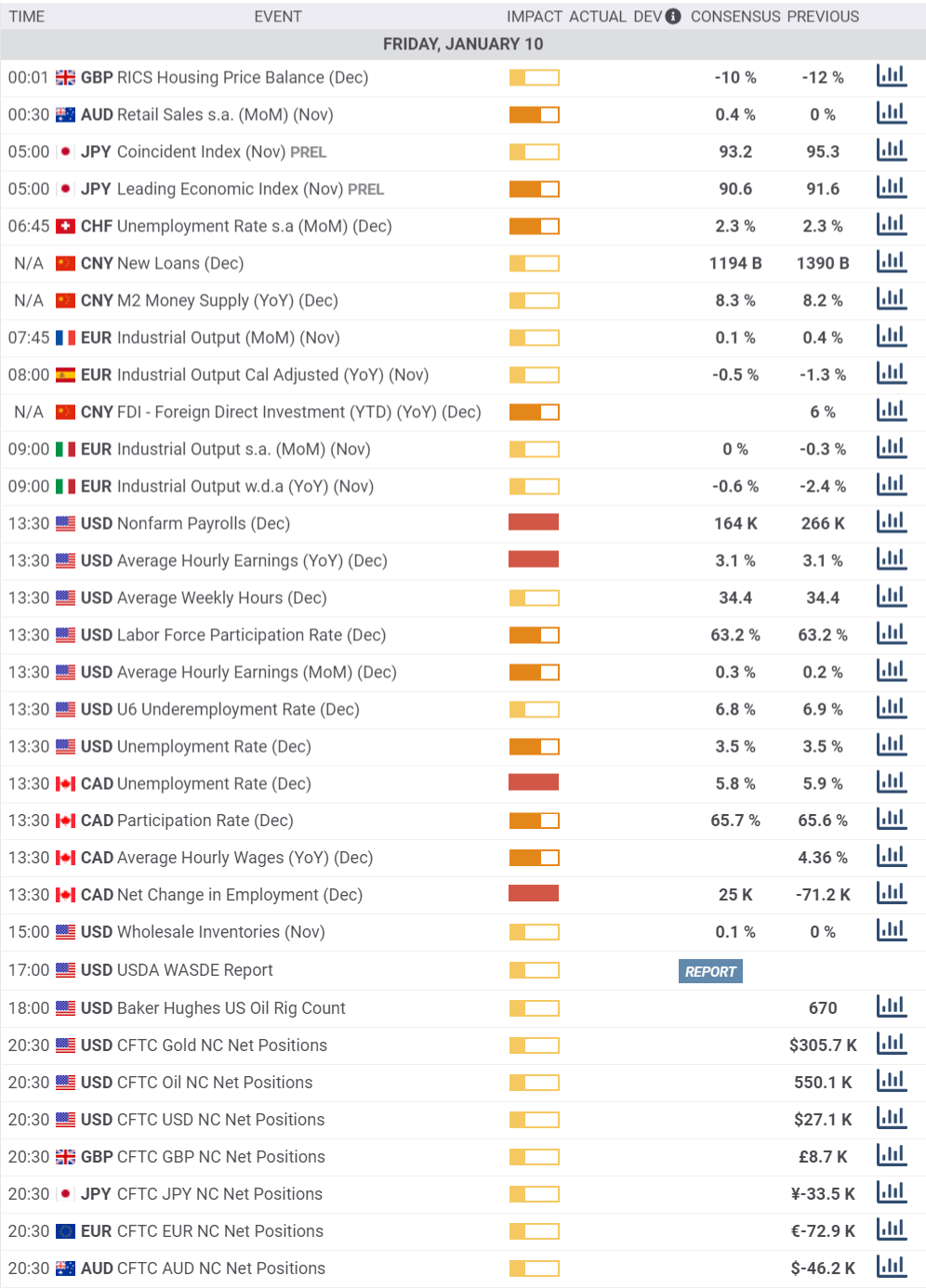