The EUR/USD pair finished a second consecutive week in the red, although it trimmed part of its losses on Friday, as a worse than expected US employment report put a halt to the dollar’s rally and triggered some profit-taking ahead of the close. According to the official report, the US added 145K new jobs in December, below the 164K expected, while the unemployment rate remained steady at 3.5% meeting the market’s forecast. Wages were also below the market’s forecast, increasing by just 2.9% YoY against the previous 3.1%, while when compared to the previous month, they were up by only 0.1%.

Anyway, the overall positive stance prevails amid cooling fears about Middle-East tensions, although speculative interest is highly susceptible to risk-related headlines. Nor the EU, neither the US, will publish relevant data this Monday. The US and China are scheduled to sign phase one of the trade deal this week. Over the weekend, news indicated that both economies agreed to hold semi-annual talks with an aim to implement reforms and resolve any disputes, which should add to the risk-on mood.

The EUR/USD pair has bounced from a weekly low of 1.1084 to settle at around 1.1120, still below 1.1132, the 61.8% retracement of its late December rally. The daily chart shows that the pair is below its 20 and 200 DMA, both converging a handful of pips above the mentioned Fibonacci resistance, while the 100 DMA lacks directional strength at around 1.1065, a strong static support level. Technical indicators in the meantime, head nowhere around their midlines, offering a neutral stance.

In the shorter-term, and according to the 4-hour chart, the upside potential seems limited, as the pair is struggling around a bearish 20 SMA, while technical indicators remain within negative levels, the Momentum advancing but the RSI having lost upward strength, currently at around 46. Further recoveries are possible, although selling interest will likely re-appear on an approach to the 1.1200 level. 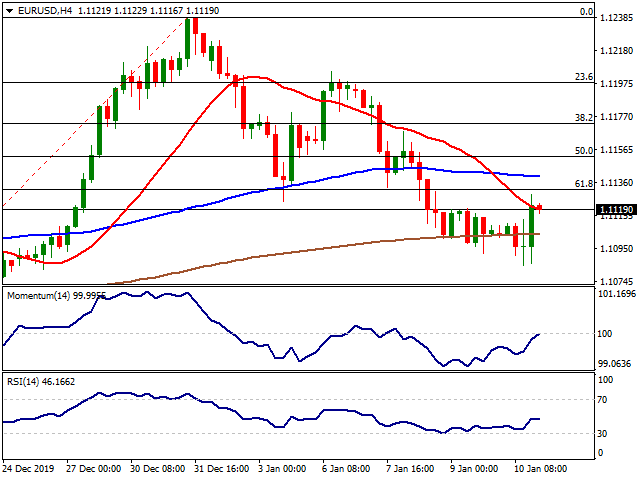 The dollar rallied against the JPY throughout the week but was unable to take the 109.70 price zone, where sellers have been aligned since last December, ending Friday little changed around 109.50. The USD/JPY pair traded as high as 109.68, as risk-appetite weighed on the safe-haven yen. Japanese data released at the beginning of the day came in mixed, at November Overall Household Spending, which declined by 2.0%, well below the 2.5% advance expected. The preliminary estimate for the Leading Economic Index for the same month, beat expectations by printing at 90.9, while the Coincident Index came in at 95.1, also above the market’s forecast.

The rally stalled after a softer-than-anticipated US employment report, which led to some losses in Wall Street, and also to a retracement in US government debt yields. The yield on the benchmark 10-year note finished the week at 1.82 after peaking mid-week at 1.87%. Japan will kick-start the week with a holiday, which means there won’t be macroeconomic releases.

The USD/JPY pair’s bullish stance persists, although it’s losing momentum. In the daily chart, the pair is still above all of its moving averages, while the Momentum indicator is barely entering positive levels and the RSI turning lower, currently at around 57. In the shorter term, and according to the 4-hour chart, the bearish potential is limited, as technical indicators are easing from extreme overbought levels, while the pair develops above all of its moving averages. A firmly bullish 20 SMA is crossing above the larger ones. The pair could turn bearish once below 108.90 a critical Fibonacci support level. 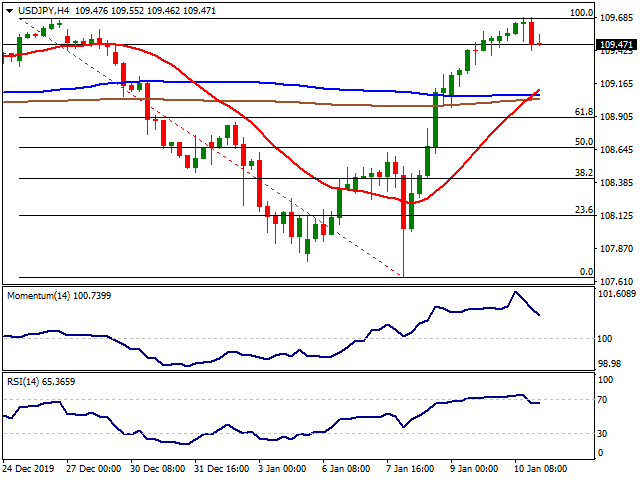 The GBP/USD pair finished Friday pretty much unchanged at 1.3055, down for the week amid dollar’s persistent strength. Late Thursday, the UK House of Commons approved PM Johnson’s Withdrawal Agreement Bill, as expected. The event had no impact on GBP crosses, although it kept the Pound subdued, amid concerns the UK could crash out of the EU without a proper deal. Comments from BOE’s Governor, Mark Carney, added weight on the currency, as he hinted that the central bank might need to cut rates.

During the weekend, BOE’s member,  Gertjan Vlieghe said that he would vote in favour of a looser monetary policy when the Monetary Policy Committee meets later this month, which will probably keep Sterling in the losing side.

This Monday, the UK will release November Industrial Production and Manufacturing Production, both seen falling further yearly basis. The kingdom will also release its Trade Balance for the same month, and monthly GDP estimates. In general, the economy is seen deteriorating further, amid Brexit uncertainty.

The GBP/USD pair is stuck around the 23.6% retracement of its latest daily slump and gaining bearish potential according to technical readings. In the daily chart, a mild-bearish 20 DMA capped the upside by the end of the week, providing dynamic resistance at around 1.3100. Technical indicators hover around their midlines without clear directional strength. In the 4-hour chart, the pair is neutral-to-bearish, developing below a congestion of moving averages, and as technical indicators head south below their midlines. The weekly low at 1.3012 is the immediate support, while a more relevant one comes at 1.2970. 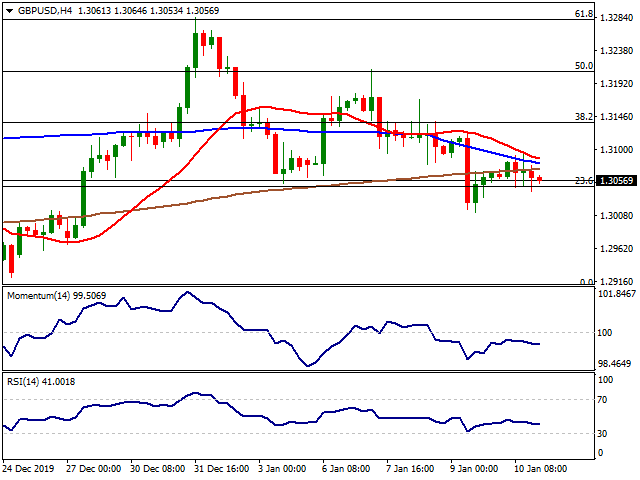 The AUD/USD pair closed the week around the 0.6900 level after hitting a daily high of 0.6910 on Friday, following the release of US employment data. However, sellers around the area kept buyers in check, with the pair unable to extend gains beyond a critical resistance area. The Aussie recovered throughout Friday underpinned at the beginning of the day by stronger than expected Australian November Retail Sales, up by 0.9% MoM. AUD/USD recovery was interrupted by the poor performance of equities, with the three major US indexes closing the day in the red.  This Monday, Australia will publish the TD Securities Inflation report, previously at 1.5% YoY.

The AUD/USD pair is trading a few pips below the 61.8% retracement of its latest bullish run, this last at 0.6915. The daily chart shows that the 20 DMA converges with the mentioned Fibonacci level, while around a mild-bearish 200 SMA. Technical indicators, in the meantime, hover around their midlines without signaling a clear directional movement ahead. Shorter-term, and according to the 4-hour chart, the pair has managed to recover above its 20 and 200 SMA, while technical indicators stand in positive levels although losing strength, reflecting limited buying interest. 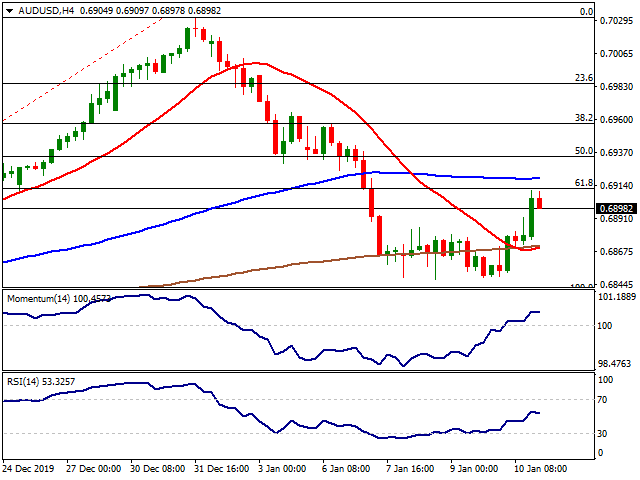 After the volatile week caused by the rising tensions in the middle-east, Silver managed to pick up the pace alongside Gold and managed to end the week over the 18.00$ level. The move caused by the weak NFP data set from the US which supported the move up in Gold also pushing the white metal higher. Last week Silver tested its highest level since September 2019 due to geopolitical events occurred. 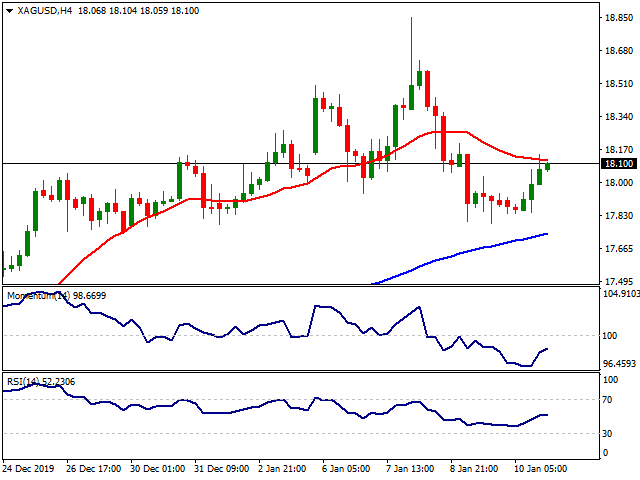 Wall Street failed to keep its momentum up with the improved risk sentiment caused by the easing tensions in the middle east. The data published by the US Bureau of Labor Statistics showed that Nonfarm Payrolls in December rose 145,000 following November's impressive reading of 256,000 and fell short of the market expectation of 164,000. Moreover, Average Hourly Earnings dropped to 2.9% on a yearly basis from 3.1%. Below then expected data fueled the fears of weakness in the inflation for the future with a possible economic slowdown.

Therefore, FED might stay on hold for a longer time or even lower the interest rates to fight with the declining inflation in the US. This fear is holding both the USD index and Wall Street for further gains and also the falling US treasury bond yields are dragging the Financial Index lower. On Tuesday, the markets will first focus on the trade balance data set from China and consumer inflation data set from the US. Also, on Thursday the retail sales data will be followed by the traders as its direct impact on the USD. 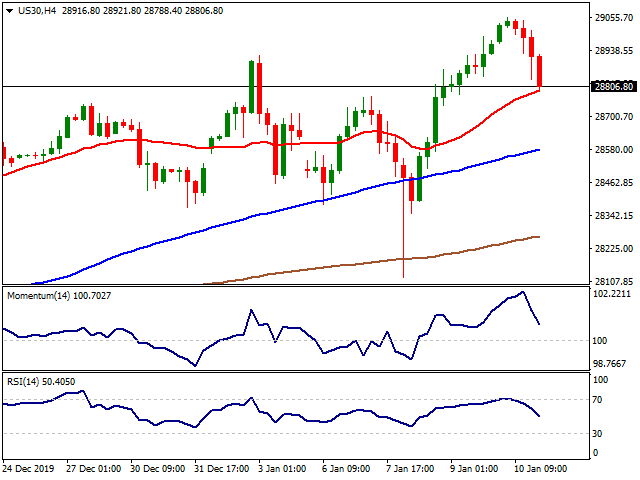 Dovish Trump statement after the Iranian counter-attack gave Gold bulls a chance to increase their positions and also weak NFP data set supported the yellow metal last Friday. The US president Trump refrained from taking advanced military action towards Iran but stated that more economic sanctions are on the way to the nation. On the data side, the Nonfarm Payrolls report released Friday showed the economy added 145K jobs in December, skipping the expected result of 164K additions by a big margin. Also, downward revisions to previous months shed 15,000 jobs from the US economy.

More importantly, the average hourly earnings rose by just 2.9% year-on-year in December compared to the 3.1% projection. With wage growth falling below 3% for the first time since July 2018, disinflation concerns may grip markets, leading to a decline in treasury yields and the US dollar supporting Gold’s move upside. On Tuesday, the markets will first focus on the trade balance data set from China and consumer inflation data set from the US alongside FED’s Williams speech. Also, on Thursday the retail sales data will be followed by the traders as its direct impact on the USD. 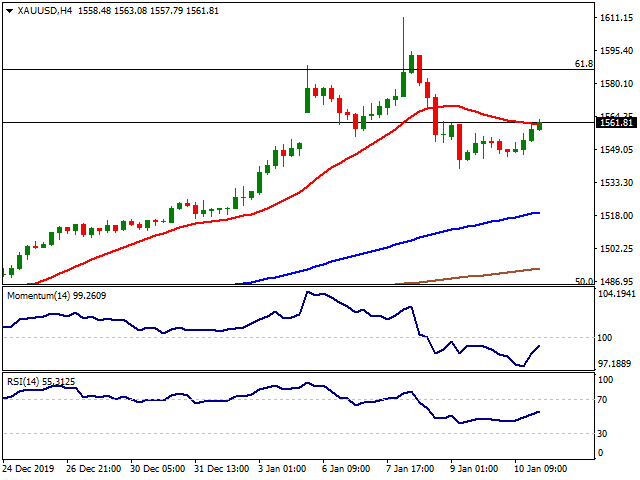 After the sharp decline caused by the easing tensions in the middle-east, WTI had a narrow range trading day on Friday and managed to stay over 59.00$ although the retracement. On the other hand, the UAE minister of energy stated that compliance with the output cut in December improved for both Iraq and Nigeria. "Oil market is not oversupplied, I think the market is doing ok," the minister added and noted that he expects 2020 to be a good year for the economy. Also, on Friday the Baker Hughes oil rig count data in the US showed a decline in the data with 659 versus 670. 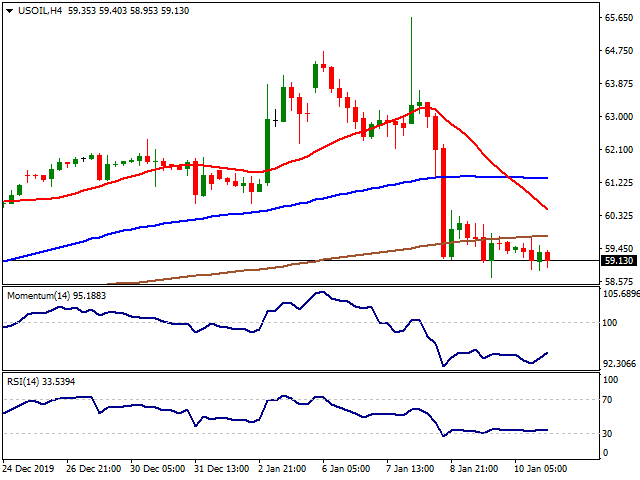