The EUR/USD pair has fallen to a fresh January low of 1.1076, recovering just modestly during the American afternoon, as market activity was restricted by a holiday in the US. There was no major catalyst for the decline, but the greenback extending the positive momentum triggered last week by better-than-expected US data.

Germany released the December Producer Price Index, which rose by 0.1% MoM, meeting the market’s expectations, while the yearly reading came in at -0.2%, better than the -0.6% expected, although the figures failed to impress.

This Tuesday, Germany will release the January ZEW Survey. The Economic Sentiment is foreseen at 15 in the country, and 5.5 in the EU, while the assessment of the current situation in Germany is expected to print -13.8. The US won’t release relevant macroeconomic data.

Heading into the Asian opening, the EUR/USD pair is hovering around 1.1080, bearish according to the 4-hour chart. The pair attempted an intraday recovery but met sellers on an approach to the daily ascendant trend line broken last Friday. In the mentioned time frame, the price is well below all of its moving averages, with the 20 SMA crossing below the 200 SMA. Technical indicators, in the meantime, reached oversold readings, where they lost bearish strength. The main support comes at 1.1065, with a break below it exposing the 1.0980 level, where the pair bottomed by the end of November. 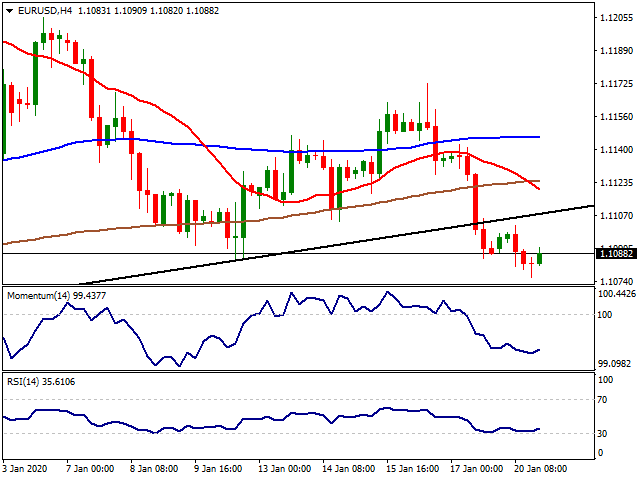 The USD/JPY pair was lifeless throughout this Monday, confined to a tight 15 pips range in the 110.10/20 price zone.  Demand for the greenback offset any positive effect the poor performance of equities could have had. A holiday in the US exacerbated range-trading around the pair after Asian and European indexes closed mixed.

In the data front, Japan released November Industrial Production, which fell by 1.0% when compared to the previous month, and by 8.2% when compared to a year earlier. Capacity Utilization in the same period declined by 0.3%, all of them missing the market’s expectations. This Tuesday, the Bank of Japan will have a Monetary Policy meeting. There will be a press conference as the central bank will also release its Outlook Report. Nevertheless, it is expected to be a non-event, as Kuroda will hardly make a change to the current policy.

The USD/JPY pair is in a consolidative phase, although the fact that it holds near multi-month highs maintains the risk skewed to the upside. In the 4-hour chart, the 20 SMA maintains a moderated bullish slope just below the current level, providing dynamic support and far above the larger ones. Technical indicators, in the meantime, remain flat, the Momentum around its 100 level and the RSI at around 70. 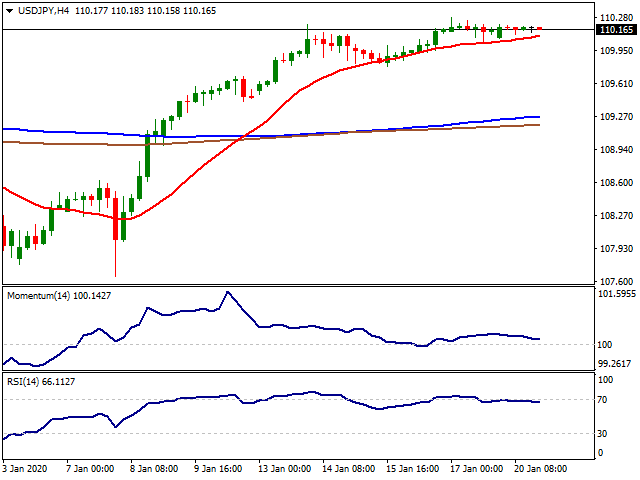 The GBP/USD pair traded as low as 1.2961 this Monday,  as while the dollar retained the positive tone triggered by encouraging US data, while the Pound is having a hard time to attract investors amid persistent Brexit uncertainty and chances of an upcoming rate cut from the BOE. The UK released the January Rightmove House Price Index which rose by 2.3% MoM and by 2.7% YoY, although the figures hardly provide support to the local currency.

The UK will release December employment data this Tuesday, with the ILO unemployment rate seen stable at 3.8% in the three months to November. The Claimant Count Change is foreseen at 24.5K from the previous 28.8K in December. Average Hourly Earnings in the mentioned quarter are seen increasing by 3.1% including bonus, and by 3.4% excluding bonus.

The GBP/USD pair is trading around the 1.3000 level, and technically bearish, as it keeps developing below the 23.6% retracement of its latest daily slide. Furthermore, the 4-hour chart shows that it spent the day below all of its moving averages, which lack directional strength, while technical indicators remain within negative levels, although without clear directional strength. The risk of additional slides will increase on renewed that sends the pair below 1.2965. 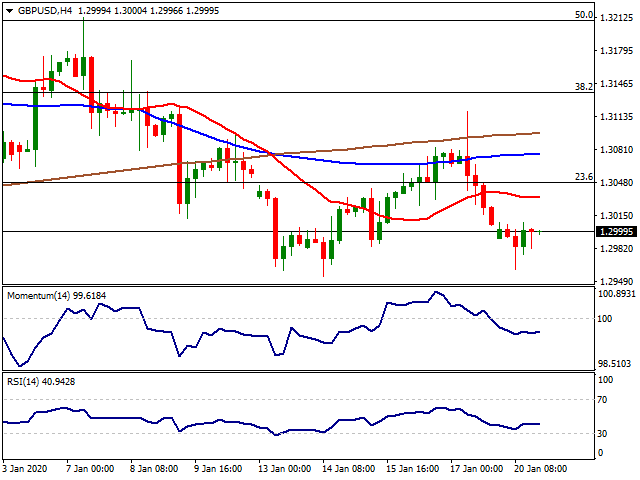 The AUD/USD pair fell to 0.6854, recovering ahead of the close to finish the day unchanged at around 0.6870. The pair traded inside a well-limited range throughout the day amid the absence of first-tier data that could trigger some action, and a holiday in the US, with volumes plummeting during US trading hours. The Australian macroeconomic calendar will remain empty this Tuesday, while China won’t release any data either.

The AUD/USD pair retains its bearish stance according to technical readings in the 4-hour chart, as it’s developing below all of its moving averages, with the 20 SMA crossing below the 200 SMA, both at around 0.6890 providing intraday resistance. The Momentum indicator maintains its strong bearish slope in negative territory, while the RSI consolidates around 41, after recovering just modestly from near oversold readings. Further slides are to be expected on a break below 0.6840, the immediate support. 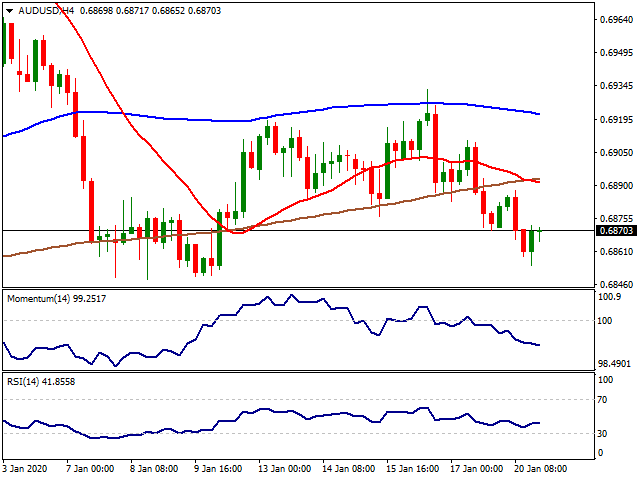 After the big shake-up in the markets caused by the surprise events in the middle-east, Gold is in a consolidation mode waiting for a catalyst to move either up or down. On the geopolitical front, while the tension between the US and Iran seem to ease, a new conflict is brewing in Libya as a risk event. On the other hand, trade deal seems to be on track with phase-one is already signed and both parts started commenting on the phase-two deal. Therefore, the risk sentiment in the markets is balanced at the moment while both risk-on and off assets are slightly finding demand. 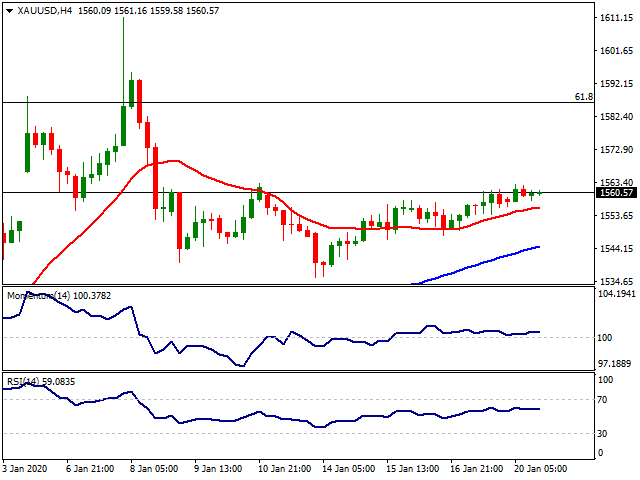 Silver also had a lifeless trading session on Monday trying to stay over 18.00$ while the markets in the US are closed due to bank holiday. Apart from the Gold trade, Silver trade is also driven by the demand for industrial production. Therefore the developments about the trade deal and manufacturing macro data especially from China will be another strong driver for the white metal. 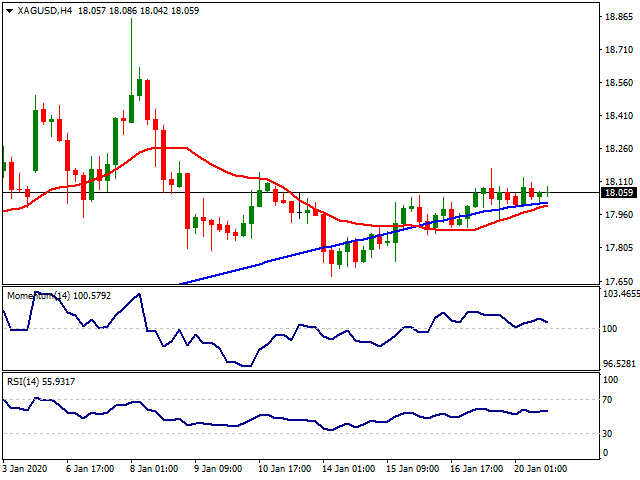 WTI failed to break 60.00$ on Monday although the developments in Libya and Iraq were a risk for oil output. Oil traders skipped the risk events in Libya and Iraq and they focus more on the IMF’s world growth estimate cut. The IMF warned that global perspectives continue being slow and they do not foresee any recovery sign in the short-term. The institution which projected a growth of 3.4% for 2020 back in October 2019, cut its projections to 3.3% for 2020. IMF representatives noted that there is still no recovery for the global economy. However, some of the significant risk factors for the global economy have receded. Therefore, with the fears of a global slowdown in Oil demand pressured the prices on Monday. 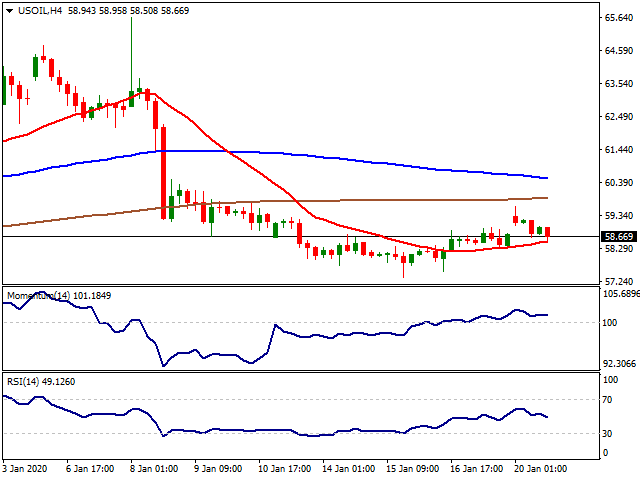 Wall Street was closed on Monday due to Martin L. King's Birthday bank holiday. While the index finished Friday trading slightly in a positive range, the trading range was limited before the long weekend. While the tension in the middle-east is easing, the trade deal front seems on track. On the other hand, the political turmoil in the US also seems like not creating pressure over the indexes as Wall Street hovers close to its all-time high levels. As this week will be slow with only second-tier data releases, the trading ranges might be limited. While the markets were closed in the US, both DAX and FTSE futures were hovering around their high levels signalling that the US indexes might protect their ground with the market opening on Tuesday. 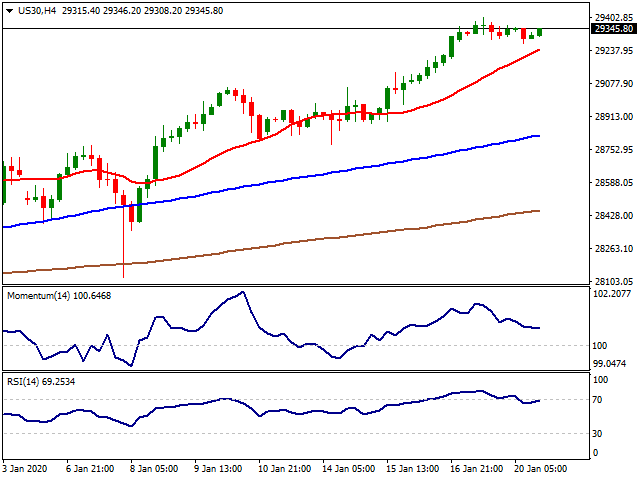