Panic led the way this Monday. Weekend news indicating that the coronavirus continues to spread outside China, spurred concerns it would become a pandemic and hit harder global growth. The greenback opened the week gapping higher against most major rivals, except those considered safe-havens. The EUR/USD pair fell to 1.0804, although the dollar came under selling pressure after Wall Street’s opening, with bulls spooked by Wall Street’s collapse. The EUR/USD pair recovered to the 1.0860 region, where it stands ahead of Tuesday’s opening.

The German Business Climate Survey for February showed that the index bounced to 96.1  from 95.2 amid a bounce in the assessment and expectations. The US just released the January Chicago Fed National Activity Index, which improved to -0.25 from -0-51, also beating the market’s expectations of -0.92. The country also published the Dallas Fed Manufacturing Index, which resulted in 1.2 in February, below the 11.8 expected

This Tuesday, Germany will release Q4 Gross Domestic Product, foreseen unchanged from the previous estimate at 0.0%. The US will publish the CB Consumer Confidence Index, the Richmond Fed Manufacturing Index and some minor housing data.

The  EUR/USD pair is battling with the 23.6% retracement of its latest daily slump and near its daily high of 1.0871. In the 4-hour chart, the pair found support around a mild-bullish 20 SMA, while technical indicators have bounced from their midlines, maintaining their upward slopes and near their daily highs. The 100 SMA has extended its decline, approaching the 38.2% retracement of the mentioned decline at 1.0900. The pair would need to advance beyond this last to gain bullish traction, quite unlikely in the current risk-averse scenario. 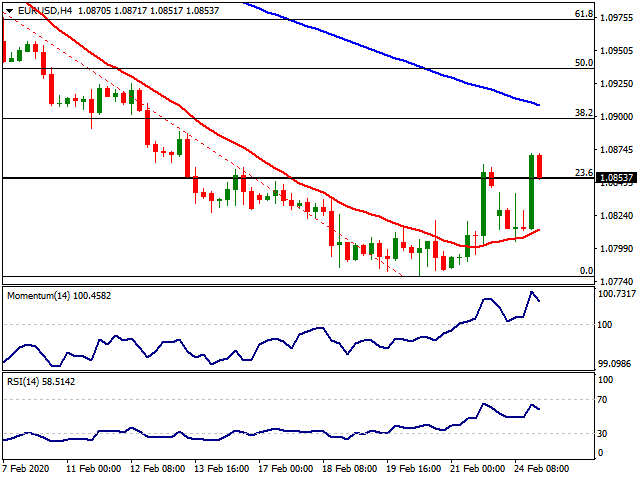 The USD/JPY pair lost roughly 100 pips this Monday on the back of risk-aversion. The market rushed away from high-yielding assets as the WHO warned that the coronavirus could become a pandemic after multiple cases were reported outside China. Wall Street collapsed, with the DJIA trading over 1,000 points lower ahead of the close, while Treasury yields plunged to multi-year lows, amid demand for safety. The yield on the benchmark 10-year Treasury note fell to 1.35%.

Japan celebrated a holiday this Monday and didn’t release macroeconomic data. This Tuesday, however, the country will publish the final version of the December Coincident Index, foreseen unchanged at 94.7, and the Leading Economic Index for the same month, seen steady at 91.6.  Given that Japanese markets were closed, there’s a good chance that the daily opening there will result in another run to safety and away from equities.

The USD/JPY pair is bouncing from a daily low of 110.32, bearish, although struggling to recover above the 61.8% retracement of its latest bullish run, now the immediate resistance at 110.62. In the 4-hour chart, the pair edged sharply lower after breaking below its 20 SMA, which has lost bullish strength. Technical indicators fell straight from overbought to oversold levels, now hovering near these lasts. Further declines are to be expected on a break below 110.20, the immediate support, toward the 109.50 price zone. 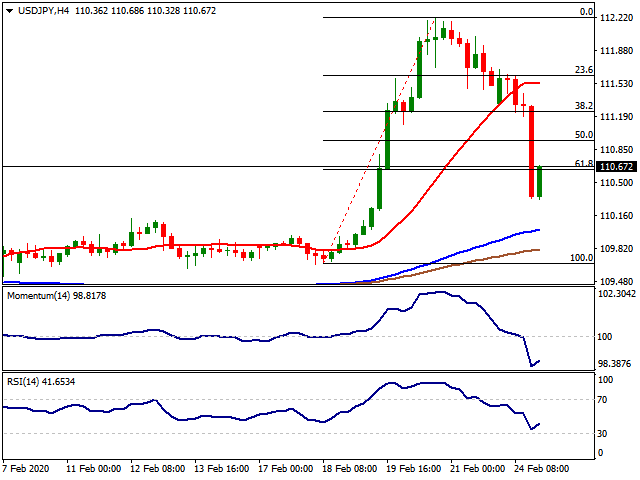 The GBP/USD pair was dominated by the greenback, falling to a daily low of 1.2886 on the back of fear dominating the financial world, later bouncing to recover the 1.2900 threshold as investors pared buying the overbought dollar.  Meanwhile, EU-UK talks loom. Representatives from the EU have met this Monday to discuss a draft of the Union’s mandate ahead of the future relationship with the kingdom. In the UK, on the other hand, PM Johnson’s spokesman announced that the British mandate for Brexit negotiations will be published on Thursday. Each part has a different stance about what it wants from the future deal, as the UK seeks to break from EU rules while Brussels calls for a  “level play field.”

The UK didn’t release macroeconomic data this Monday but will publish this Tuesday the CBI Distributive Trade Survey on realized sales for February, foreseen at 4% from 0% previously.

The GBP/USD pair is closing the day in the red, technically neutral-to-bearish in the short-term, as, in the 4-hour chart, the pair struggling to advance above a bearish 20 SMA, while below the larger ones. Technical indicators hover around their midlines, lacking clear directional strength. In bigger time frames, the pair retains its bearish stance and would need to recover well above 1.3000 to revert its negative stance. 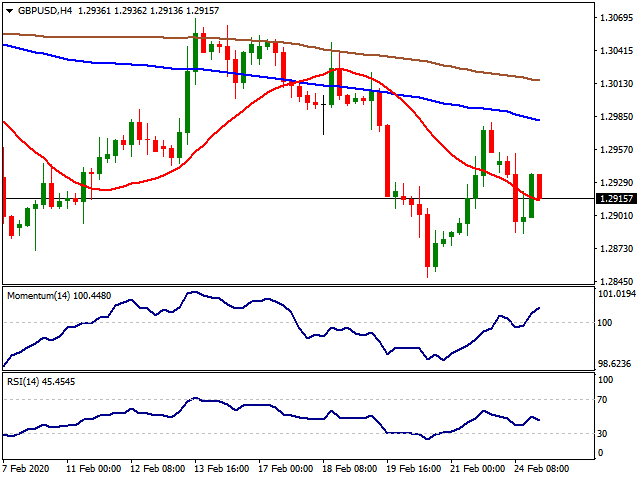 The AUD/USD pair fell to re-test its multi-year low of 0.6585 at the beginning of the day, to later regain the 0.6600 level. The pair stands a few pips above this last early Tuesday, as Chinese jitters limit demand for the Aussie even with the American dollar shedding some ground. Weekend news indicating a large number of new cases in Italy, South Korea and Iran, reminded speculative interest of the possible effects of the virus outbreak in global growth. Furthermore, the IMF director, Kristalina Georgieva said over the weekend that the epidemic was expected to lower the global growth by 0.1% this year. The Australian macroeconomic calendar will remain empty until next Wednesday.

The AUD/USD pair is unable to extend gains beyond the 0.6600 level, trading a few pips above it. The 4-hour chart shows that it is retreating from near a bearish 20 SMA, which accelerates south below the larger ones. Technical indicators have recovered from extreme oversold levels, but lost upward strength within negative levels, indicating the absence of buying interest. 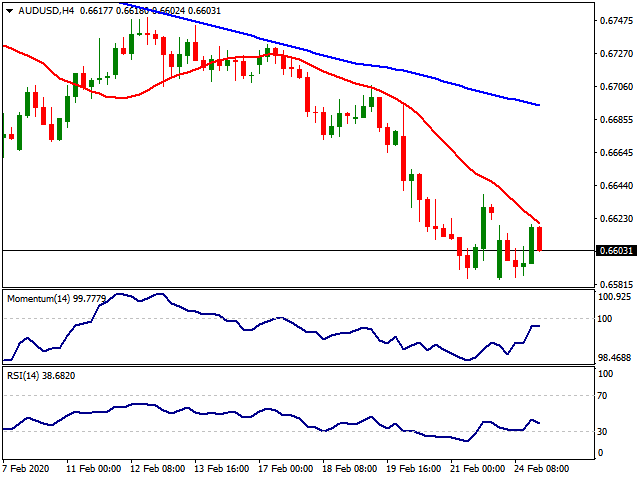 The coronavirus case created a heavy sell-off in the equity markets as major outbreaks reported outside China in Iran, South Korea and Italy. On the other hand, Gold tried to capitalise the risk fears and spiked through 1.700$ but failed to test the psychological level and retraced back to the mid-1600$ zone. In Europe, the biggest outbreak was seen in Italy causing the famous Venice festival to be cancelled and putting a dozen towns in the northern part into quarantine. Despite the retracement from its daily highs, Gold managed to gain around %1.0 on a daily basis indicating further inclines on the way driven by the virus fears. 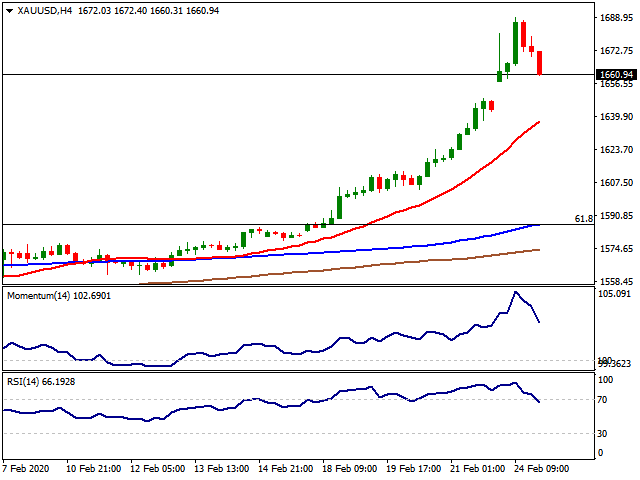 Silver tried to test 19.00$ level on Monday alongside rising fears about the coronavirus outbreak. As the number of cases and casualties increased outside China, markets tried to run to safety lifting the safe havens. However, Silver’s move up was a bit reluctant compared to Gold due to its industrial metal label. 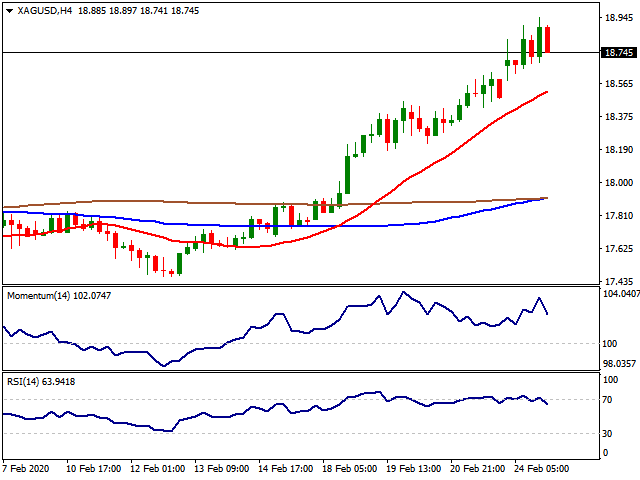 WTI’s efforts to gain ground did not live long as the news kicked in about the coronavirus outbreak spreading outside China. The black gold tested mid-50.00$ level on Monday but saw some demand later lifting it to mid-51.00$, slashing %3.30 on a daily basis at the time of the writing. On the other hand, US crude oil supplies remained on the rise during last week as per the API and EIA reports, while driller Baker Hughes reported that US oil rig count went up by one to 679 active oil rigs, also during last week. OPEC+ is expected to have a meeting in early March while there is still no news regarding further production cuts with opposition from Russia. 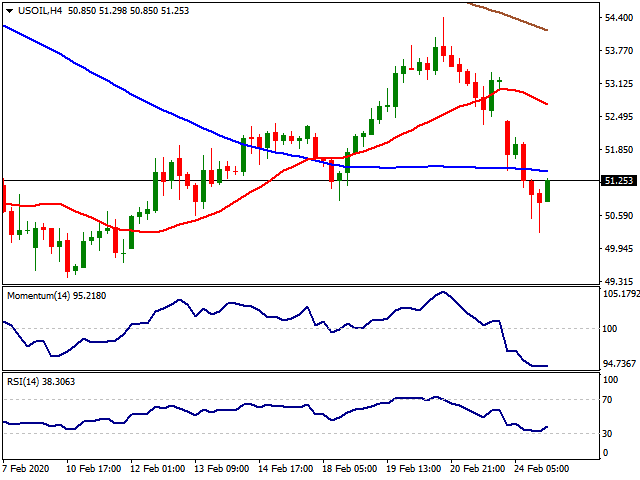 Dow Jones had its second-worst decline on a daily basis with brewing fears of the coronavirus outbreak. The index opened with a big bearish gap and tested even below 28.000 level on Monday. As the number of cases and casualties inclined outside China with a fast pace, the uncertainty about the route of the outbreak and its possible impact on global trade sparked outrage in the markets. The CBOE Volatility Index, Wall Street's fear gauge, is up 40% on the day reflecting the flight-to-safety although Chicago Fed National Activity index reading was better than expected. In Italy, the famous Venice festival was cancelled and dozens of northern towns are put into quarantine. Also, the death toll has risen in Iran forcing Neighbour countries to limit their flights as one way back. 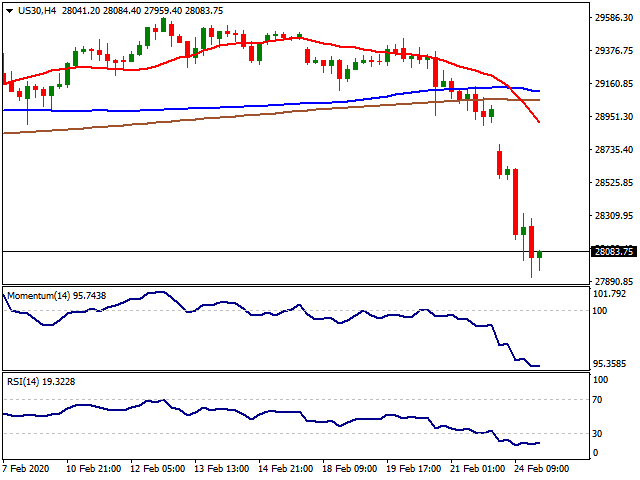