The financial world was all about sentiment for a second consecutive day. The American dollar recovered some of its Monday losses throughout the first half of the day, but resumed its decline with the US opening, amid poor local data and government yields collapsing, raising speculation of a possible recession in the world’s largest economy. Meanwhile, more European countries reported coronavirus cases and fears it becomes a pandemic kept high-yielding assets on the losing side.

The EUR/USD pair surged to 1.0882 a fresh one-week high, with the common currency lacking follow-through amid fears of economic slowdown also hitting the Union. The German Federal Statistical Office confirmed 2019 Q4 GDP at 0.0%, confirming economic weakness in the Union.  As for the US, data came in below expected, as the February Richmond Fed Manufacturing Index came in at -2 vs 20 previously and the 13 expected. Also, the CB Consumer Confidence Index resulted at 130.7, below the 132.6 expected, as the January index was downwardly revised from 131.6 to 130.4. Wednesday will bring no macroeconomic data of relevance.

The  EUR/USD pair is finishing the day near its daily high and above the 23.6% retracement of its latest daily decline, the immediate support at 1.0850, with the next Fibonacci resistance at 1.0900. The 4-hour chart shows that the pair is holding above a bullish 20 SMA, although the 100 SMA keeps heading south above the current level, converging with the 38.2% retracement of the mentioned decline. Technical indicators consolidate near overbought levels, favouring additional gains without confirming them. Beyond the mentioned 1.0900 figure, bears will probably step back and wait for higher levels. 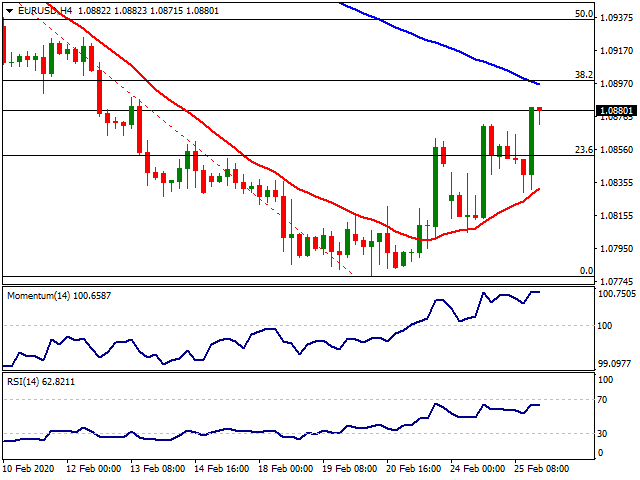 The USD/JPY pair fell to the 110.00 level during the American afternoon, trading not far above the level as the day comes to an end. Demand for safe-haven assets remained high amid recession fears. Disappointing macroeconomic figures coupled with US government bond yields falling to record lows and coronavirus-related headlines, showing that the outbreaks is extending its claws in Europe. The US 10-year Treasury yield fell to a record low of 1.32%, while US indexes plunged for a second consecutive day.

Japanese data was mixed, as the January Corporate Service Price Index beat expectations, up to 2.3% from 2.1% previously. The Leading Economic Index for December met the market’s expectations as it came in at 91.6, although the Coincident Index was downwardly revised to 94.1. US data, on the other hand, missed the market’s expectations, further hurting demand for the dollar.  Japan won’t release macroeconomic data this Wednesday.

The USD/JPY pair is down for a third consecutive day, and at risk of extending its slump. The 4-hour chart shows that the pair is below its 100 SMA for the first time since early February, while the 20 SMA turned sharply lower over 100 pips above the current level. Technical indicators maintain their bearish slopes near oversold readings. A break below the 110.00 level favours a downward extension toward 109.65, where the pair bottomed on February 18. 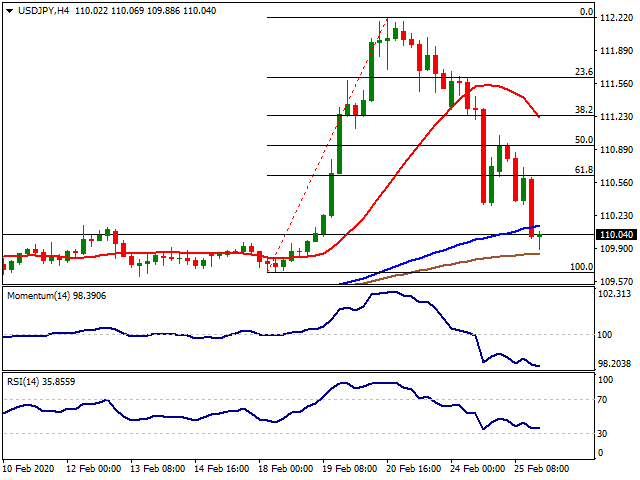 The GBP/USD pair reached a daily high of 1.3017 on the back of the dollar’s weakness and despite soft UK figures. The February UK CBI Distributive Trade Survey on realized sales showed a modest 1.0% increase against the 4.0% expected. The report showed that sales remained flat and orders fell in the year to February, although there has been an improvement in investment plans when compared to the previous quarter.

The EU released the Political Declaration, a document set to be the base of the upcoming trade relationship with the UK. The kingdom will release its declaration next Thursday, although Downing Street responded to the EU, claiming that the UK deserves the same respect to autonomy as other major economies such as Canada and Japan, and mentioned that the EU doesn’t demand a level playing field when dealing with the US. The UK won’t release macroeconomic figures this Wednesday.

The GBP/USD pair is trading near its daily high above 1.3000, bullish in the short-term. The 4-hour chart shows that the pair, however, is still unable to surpass a mild-bearish 200 SMA, although it holds above the 20 and 100 SMA. Technical indicators, in the meantime, have lost their bullish strength, but remain within positive levels. An immediate resistance level comes at 1.3020, while multiple intraday highs stand in the 1.3050/60 region. 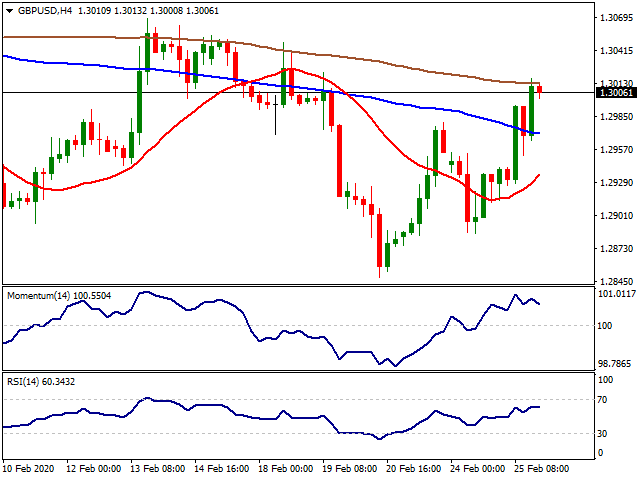 The AUD/USD pair remains depressed, trading around the 0.6600 level at the end of the day, trapped between risk aversion and the dollar’s broad weakness. The market’s sentiment took a turn to the worst following the release of tepid US data, sending US equities sharply lower during the American session and weighing on the pair. Australia didn’t release macroeconomic figures so far this week, but this Wednesday will publish Q4 Construction Word Done, foreseen at -1% against the previous -0.4%.

The AUD/USD  pair met buyers for a third consecutive day at 0.6585, a multi-year low, but given the lack of follow-through beyond the current levels, the downside remains favoured. In the 4-hour chart, the pair was unable to advance beyond a bearish 20 SMA, although it holds just above the current level. The Momentum indicator turned south within neutral levels, while the RSI also gyrated lower, but near oversold readings, reflecting the absence of buying interest rather than suggesting an upcoming slide. 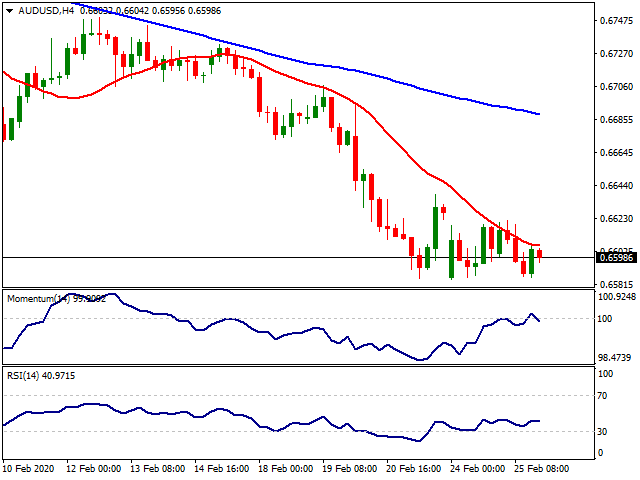 Gold retraced back on Tuesday after hitting its highest level in seven years as a technical correction. The coronavirus outbreak still looms over the market fueling flight to safety as Wall Street keeps on losing ground. On the other hand, the US 10 year Treasury yield marked %1.322 as all-time low on Tuesday trading. At this point, the developments regarding the coronavirus outbreak most likely to keep Gold demand alive and technical retracements can be seen as a buying opportunity. As the number of new cases is surging outside China, the possibility of FED to cut rates further as a defensive move against the economic slowdown caused by the outbreak is also supporting the Gold prices. 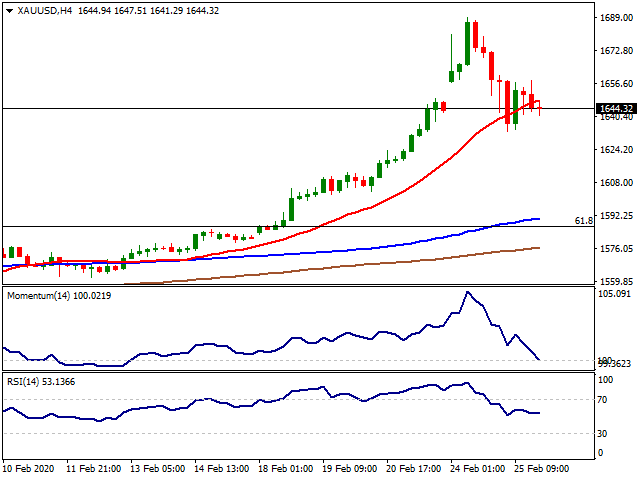 Silver also retraced back on Tuesday after hitting its highest level since September 2019 as a part of a technical correction. Silver is having a hard time finding its course as its precious metal etiquette is acting as a safe haven while its industrial demand is being hurt by the ongoing coronavirus outbreak. 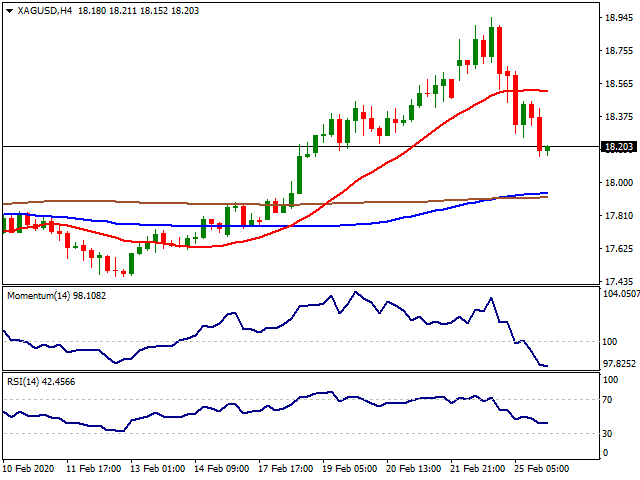 WTI is again getting hammered along with the equity markets as the fears of the coronavirus outbreak is dominating the risk sentiment. While the number of cases and casualties continue to surge outside China, fears of a deeper decline in the demand for energy is pressuring oil prices. On the other hand, OPEC+ still did not have a consensus regarding the further production cuts to fight with the diving oil prices. Also, the International Energy Agency's (IEA) chief Fatih Birol said they may need to lower their global oil demand growth estimate, which is already at its lowest level in the last ten years. 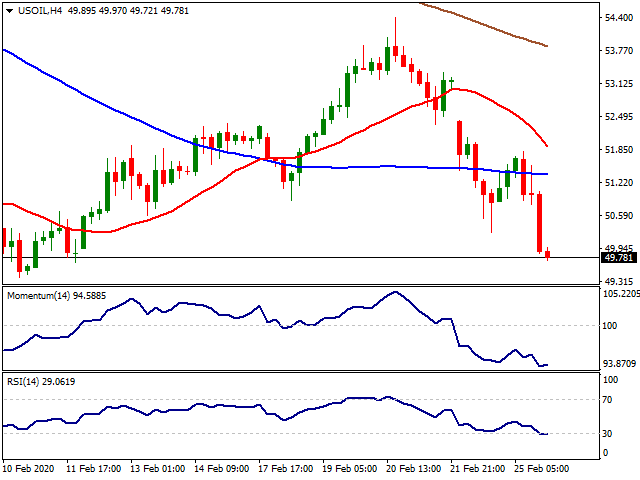 Although Wall Street had a positive opening on Tuesday, flight to safety kicked in again causing Dow Jones to free-fall along with the comments from the CDC. Due to the Washington Post report, CDC warned of coronavirus inevitability in the US. As an immediate effect, Dow Jones dived more than 800 points testing 27.000 level. On the other hand, the WHO has confirmed that China’s data on virus cases are genuine as some provinces report a reduction in totals. The organization also said the spread is not a pandemic yet but has the potential to be one. 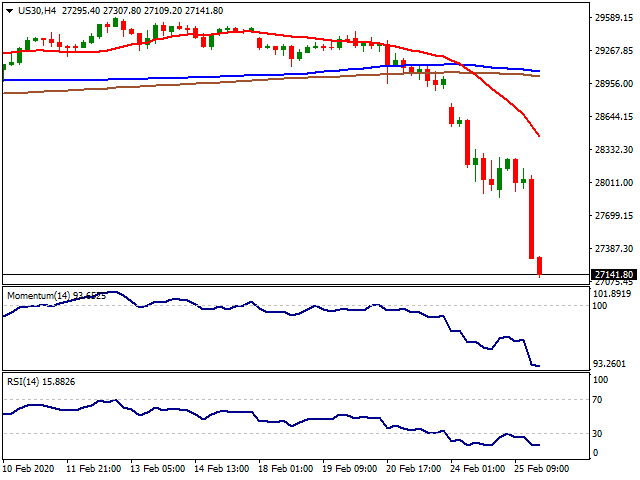