The EUR/USD pair fell sharply on Thursday, extending its pullback from the 1.1500 area while stocks plummeted after US President Trump travel ban to Europe failed to ease fears regarding the coronavirus outbreak. The European Central Bank refrained from cutting rates at its March meeting but announced a package focusing on liquidity, both LTRO and TLTRO, while temporarily increasing the monthly bond purchases by EUR 120 billion through the year-end.

It was followed by the Federal Reserve which announced it will inject more than $1.5 trillion of temporary liquidity into the financial system on Thursday and Friday and add purchases of notes and bonds in an effort to alleviate “highly unusual disruptions in Treasury financing markets associated with the coronavirus outbreak,” according to a statement by the NY Fed. Despite Fed’s announcement, Wall Street indexes remained under heavy pressure, posting losses of more than 7%.

The EUR/USD pair which had fell to a daily low of 1.1055 managed to recover ground during the New York session, climbing back toward the 1.1200 area. Despite the late bounce, technical indicators remain in negative ground in the 4-hour chart, favoring further losses, although the daily chart holds a slightly positive tone. Initial support is seen at the 1.1055 area, with a break paving the way towards 1.1000 psychological level, and 1.0950, February 28 low. On the other hand, if EUR/USD manages to resume the rise, next resistance could be found at 1.1350 and 1.1460, ahead of 1.1497, where it set a 13-month high on Monday. 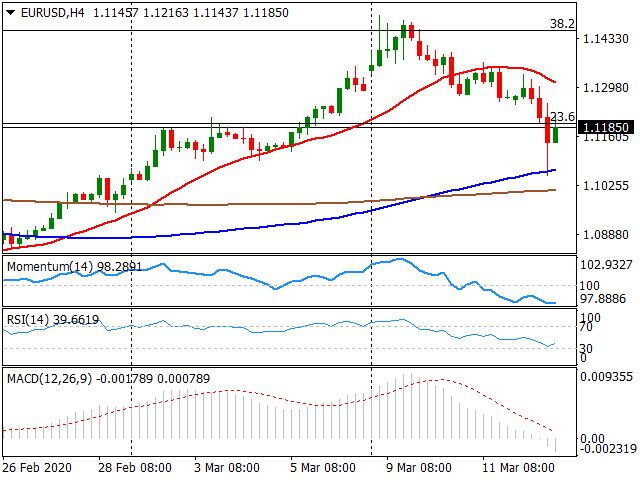 The USD/JPY pair advanced above the 106.00 level on Thursday but failed to sustain momentum and retreated to end the day around the 105.00 level. The greenback was among the best performers and managed to advance even against the yen amid safe-haven demand after the WHO declared the novel coronavirus a global pandemic on Wednesday and Trump said the US will ban all travel from Europe for 30 days.  Despite the Fed announced it will inject more than $1.5 trillion of temporary liquidity into the financial system, US stock indexes plunged while the yield on the US 10-year Treasury note rose to an intraday high of 0.90%.

From a technical perspective, USD/JPY holds a slightly positive tone according to the 4-hour chart, although the bias looks bearish in bigger time frames, with the 20 and 200-day SMA about to complete a bearish cross. The pair would need to break above a descendant resistance line coming from February highs, currently around 106.40, to improve the short-term outlook. Renewed selling interest would pay the way for a retest of its recent three- year low of 101.18. 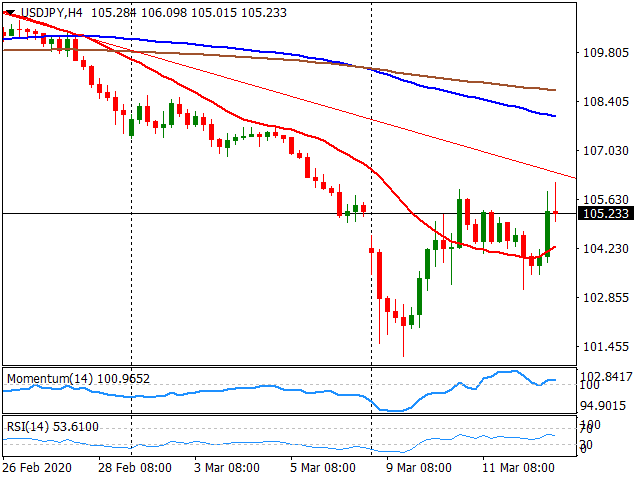 The GBP/USD pair fell for the third day in a row on Thursday, extending its rejection from the 1.3200 mark and posting a fresh five-month low of 1.2490. The main driver behind the slid was US dollar strength as investors rushed for liquidity amid unremitting coronavirus concerns. Despite prospects of further rate cuts and the New York Fed announcement of $1.5 trillion liquidity injection, stocks continue to crumble while the greenback emerged as the ultimate safe-haven asset.  Additionally, investors continued to assess Bank of England’s decision to cut rates by 50 basis points on Wednesday, and UK government's massive £30 billion coronavirus relief package.

Even though GBP/USD managed to cut losses over the last hours and climbed above the 1.2600 level, the short-term technical picture remains bearish. Indicators in the 4-hour chart remain in the negative ground although the RSI has already reached oversold conditions, favoring a consolidation phase. In the daily chart, the pair consolidates below its main moving averages, after breaking below the 200-day one earlier today and standing nearly 600 pips away from its Monday’s peak of 1.3200. A break below 1.2490 would add additional pressure on the cable with not much on the way until 1.2400. On the flip side, the pair needs at least to regain the 200-day SMA around 1.2705 to ease the immediate pressure. 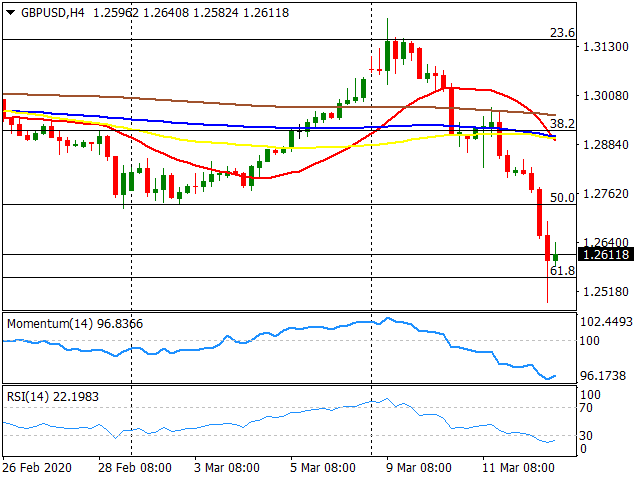 The AUD/USD pair slumped on Thursday as coronavirus fears continued to dominate investors’ sentiment. Despite the pledge for aid from several central banks and governments around the world, stocks crumbled in Wall Street, adding pressure to the already weakened Aussie. For its part, the US dollar seems to have regained its appeal as a refuge, a combination that sent the AUD/USD to a fresh decade-low of 0.6212.

The technical picture looks strongly bearish for AUD/USD in every time frame, although intraday charts exhibit oversold conditions which could guarantee a consolidative/corrective phase for the next sessions. Corrective bounces will likely remain limited by the 20-day SMA at 0.6560. On the downside, October 2008 and November 2008 monthly lows  are the last barriers standing between the AUD/USD and its 2003 lows. 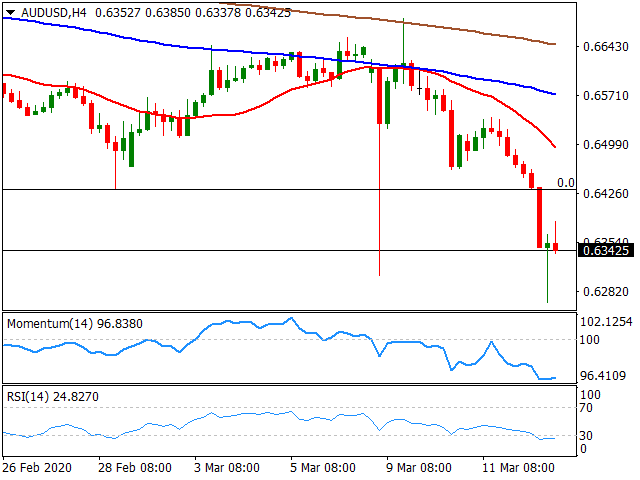 On Thursday only the USD dominated the markets as the developments regarding the coronavirus pandemic only getting worse. While the affected countries are taking more and more serious countermeasures such as travel bans, school holidays and ban of public gatherings, the economic results are being observed too with the heavy plunge in equity markets. As FED intervened in the markets to fight with the pandemic with huge liquidity instruments, the USD index DXY lifted over 97.00 levels and flight to cash pushed Gold and equity markets downside. On the other side of the pond, ECB kept the interest rates the same but announced easing measures. 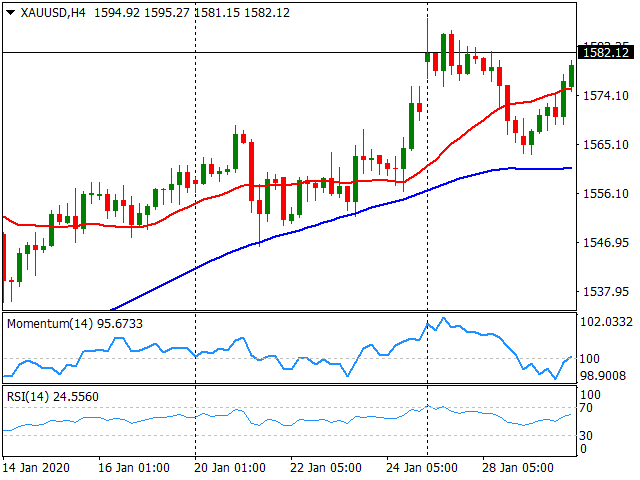 Silver also sank on Thursday as well as Gold with the flight to liquidity sparked by the FED’s easing hit the markets. Trump’s travel ban sparked a huge sell-off in the equity markets and later that FED’s easing move pushed the USD index DXY higher over 97 levels. While Gold lost around %4.00 on a daily basis, Silver lost more than %6.00 as the sell-off got intense hitting its lowest level since 8 months. 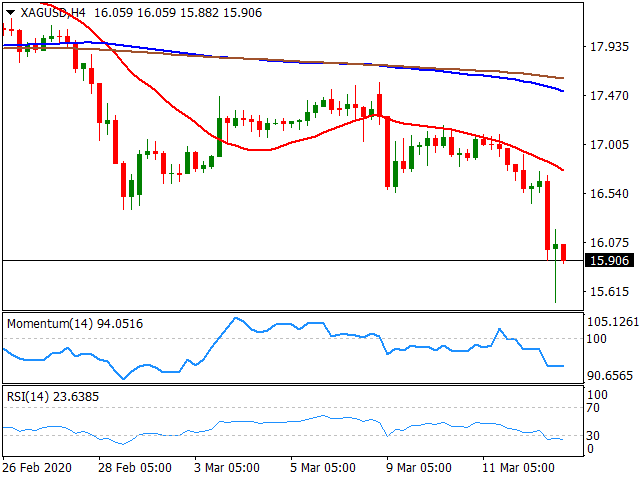 WTI’s effort to gain strength on Tuesday was short-lived and the black gold went back to its losing streak trying to hold over 30.00$. While the coronavirus pandemic is threatening the global economy as countries started taking extreme measures to stop the virus spreading, fears of a big decline in oil demand are pressuring the prices. Also, the output and price conflict between Saudi Arabia and Russia sparked another selling wave as Saudi Arabia slashed the price of the oil and pushed the oil supply at the same time. Due to a Reuters report, Kremlin stated that they have no plans to contact Saudi Arabia or OPEC regarding the latest conflict and also added they can stand lower prices and higher outputs for a very long time. In the meantime, UAE followed Saudi Arabia stating that they will lift the oil supply as well. 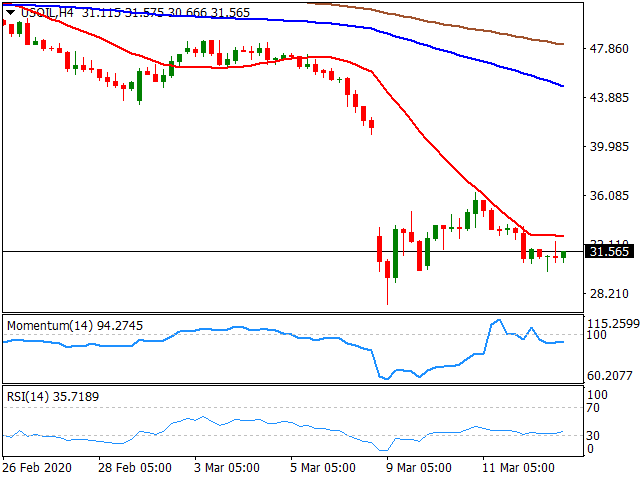 After entering the bear zone for the first time since 2008, Dow Jones had its worst day erasing %10 on a daily basis since 1987 which is known as the “Black Monday”. Trump’s travel ban announcement on Wednesday sparked the selling wave on global equity markets. At some point, the automatic circuit breakers in the system triggered and halted the option trades as the sell-off got intense. Also, FED announced a QE program worth of 1.5 billion $ as a short term loan to banks and a change in its asset-buying program. The outbreak now declared as a pandemic is still escalating globally pushing the governments to take extreme countermeasures such as travel, big sports events, and social gatherings bans as well as pause schools. 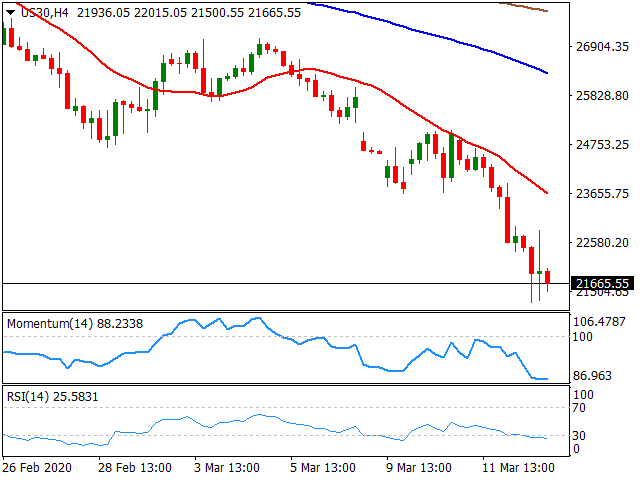