The EUR/USD pair has retaken the 1.1000 threshold this Thursday, extending its intraday advance to 1.1044. The rally was the result of persistent dollar’s weakness, as the American currency edged lower against all of its major rivals, despite sentiment fluctuated throughout the day. Asian and European indexes closed in the red, but US indexes took notice of the latest Fed’s Chief Powell words and rallied.

The head of the US Federal Reserve said that the central bank would expand easing if necessary. He also added that he expects economic activity to resume in the second half of the year, although he does not know when the economy will recover and that the country may already be in recession. The news came after the US Congress agreed on a $2T relief package. Profit-taking took place amid granted liquid dollar in the middle of the coronavirus pandemic. The ECB, on the other hand, announced through a legal document released this Thursday that the limit to a third of each of its member states’ debit, should not apply when buying bonds within its relief program.

The first figures with crisis numbers were out and were no good. US unemployment claims jumped to 3.28 million for the week ended March 20, as with the ongoing lockdown pretty much every quarantined worked has the right to do so. Data added pressure on the dollar. This Friday, the main event will be the US House voting the relief bill agreed by senators late Wednesday. Also, the country will release the final version of the March Michigan Consumer Sentiment Index, foreseen at 90 from a preliminary estimate of 95.9.

The EUR/USD pair has broken above the 38.2% retracement of its latest daily decline at around 1.0960, now a relevant support level. The 4-hour chart shows that the 20 SMA continues to advance below the current level, with the price now also above the 200 SMA. Technical indicators eased just modestly after reaching overbought levels. Overall the risk is skewed to the upside, with the 50% retracement of the mentioned daily slump at 1.1065 providing immediate resistance. 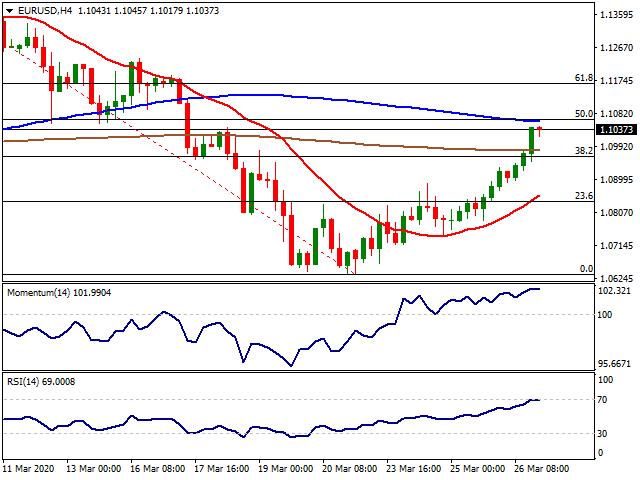 The USD/JPY pair has finally given up, turning negative and settling at daily lows in the 109.20 price zone, amid the broad dollar’s weakness. The pair fell throughout the first half of the day amid easing optimism leading to losses in Asian and European equities. The pair was unable to change course during US trading hours, as despite the positive performance of Wall Street, the greenback shed ground following the release of weekly unemployment claims. US Treasury yields failed to advance, ending the day just marginally lower.

Japan is scheduled to publish March Tokyo CPI during the upcoming Asian session, foreseen at 0.5% YoY from 0.4% previously. The core reading, ex fresh food and energy, is seen stable at 0.7%.

The USD/JPY pair is trading at its lowest in a week and has room to extend its slump during the upcoming sessions. In the 4-hour chart, it has broken below its 20 SMA, which slowly grinds lower at around 110.75, while approaching a flat 200 SMA, this last, providing support at around 108.60. Technical indicators in the mentioned time-frame head firmly lower within negative levels, signalling additional declines ahead. The pair has room now to extend its decline toward the 108.50 area, where it has relevant intraday highs and lows. 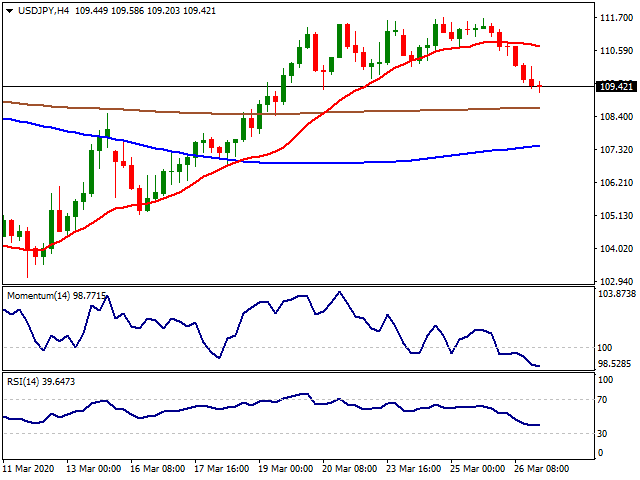 The GBP/USD pair soared to 1.2196, its highest since March 17, as speculative interest continued to dump the greenback. The Bank of England held this Thursday its usual monetary policy meeting, although it left its monetary policy unchanged, as expected. The MPC unanimously voted to keep rates at 0.10% and the APP at £ 645B and left doors open to expand its facilities program.

Blind demand for the greenback has finally eased amid the latest measures announced by the US, although the pandemic is far from over, with the number of cases worldwide above 500,000. The UK is yet to see the worst of it, after calling for a lockdown too late. The latest data available indicates that the number of cases in the kingdom rose to11,658, while the death toll hit 578. This Friday, the UK will release March Nationwide Housing Prices. 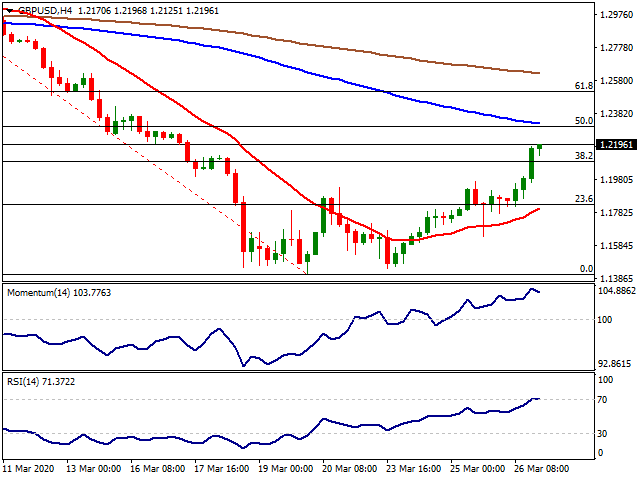 The AUD/USD pair is ending the day with gains around 0.6080, a fresh weekly high, underpinned by rallying equities and a weaker dollar in the last trading session of the day. The pair recovered from an early low of 0.5869, a result of the dismal mood that led markets throughout the first half of the day. Additional support came from gold, as the bright metal resumed its advance to trade as high as $1,643 a troy ounce. The commodity, however, eased ahead of the close amid Wall Street’s persistent strength. Australia won’t release relevant data this Friday.

The AUD/USD pair is trading at daily highs, and the 4-hour chart shows that the 20 SMA has provided intraday support, maintaining its bullish strength below the current level. Technical indicators in the mentioned chart have bounced from around their midlines, the Momentum still heading higher and the RSI directionless at around 62. The 100 SMA keeps heading south above the current level, currently at 0.6190. The short-term picture favours a bullish continuation, although, in the longer run, the advance seems just corrective. 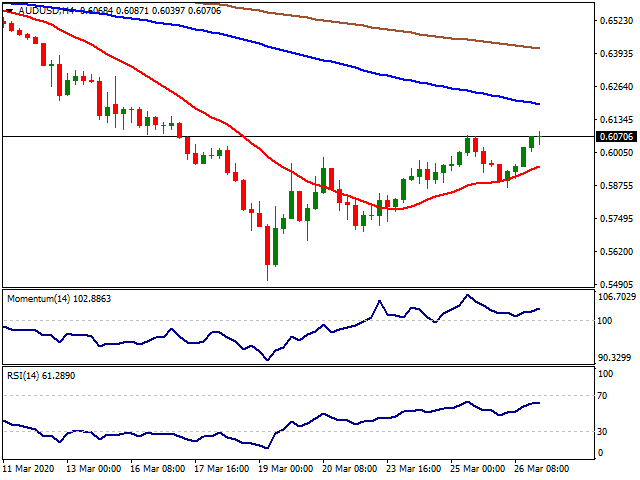 Gold is on the way to reach its 2020 highs as the USD keeps its downward pressure. USD index DXY’s retracement started with FED’s unlimited QE programme and on Thursday with the record number of jobless claims in the US, the greenback was put under extra pressure sliding to mid-99.00 levels. In the mid-term, Gold will likely to find support with the fears of a global recession caused by the coronavirus pandemic. On the other hand, the macro data sets in the US will most probably be printed with record declines which will put the USD under extra pressure apart from FED’s policies. Therefore, Gold is likely to be supported by both risk aversion and retracing USD. 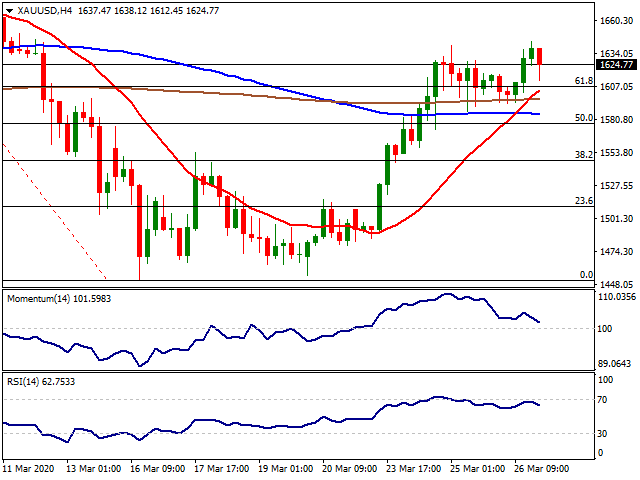 After five consecutive days of incline, Silver had a technical correction on Thursday while Gold ended the day barely on a positive note. Although the white metal rallied alongside Gold, it is still weak as the Gold to Silver ratio is still at its highs which gives a clue about a possible rally is emerging. 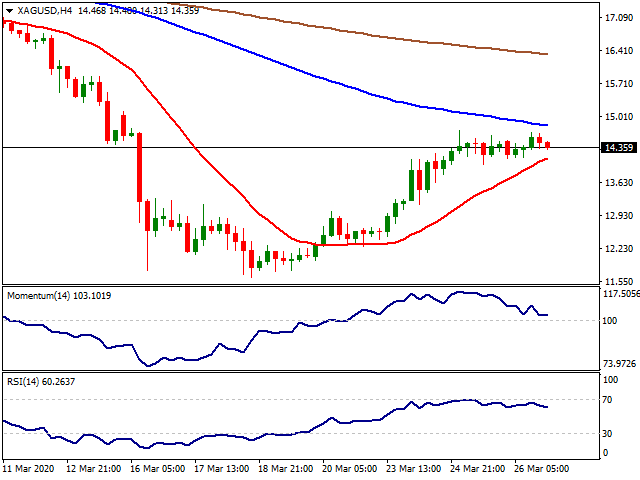 WTI’s effort to gain ground short-lived and the black gold accelerated its move down after testing 25.00$ this week. On Thursday, Fatih Birol, the head of the International Energy Agency (IEA), said that the global oil demand could drop as much as 20 million barrels per day (BPD), or 20%, in 2020 due to the slowdown caused by the coronavirus pandemic. On the other hand, the US Department of Energy announced that it has cancelled planned crude oil purchases for the strategic reserve due to lack of funding in the coronavirus relief package and further weighed on crude oil prices. Also, the main driver for the meltdown in the prices is observed as the price war between Saudi Arabia and Russia. 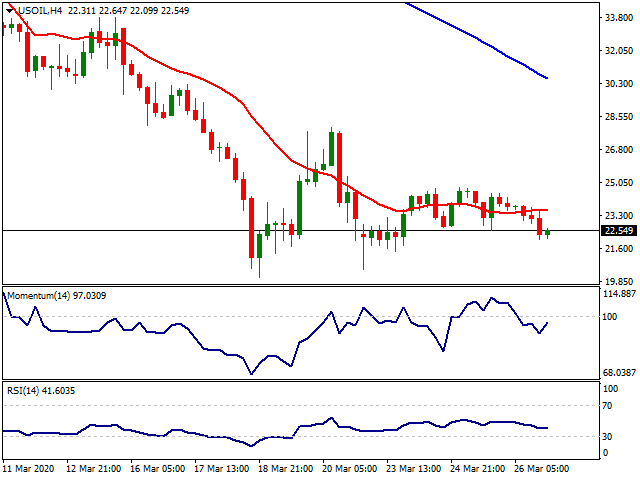 Wall Street rallied on Thursday despite the record number of US jobless claims in history. The data published by the US Department of Labor showed that Initial Jobless Claims skyrocketed to 3,283,000 (four times the previous record jump) from 282,000 to reflect the impact of the coronavirus outbreak on the labour market. On the other hand, the US Bureau of Economic Analysis' third estimate of the Q4 GDP growth remained unchanged at 2.1%. As the markets in the US are still digesting the 2 trillion USD stimulus program, cheap USD is also supporting the demand for stocks. 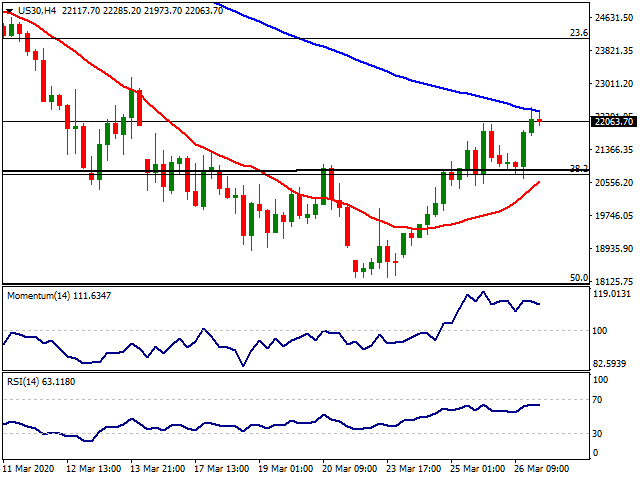 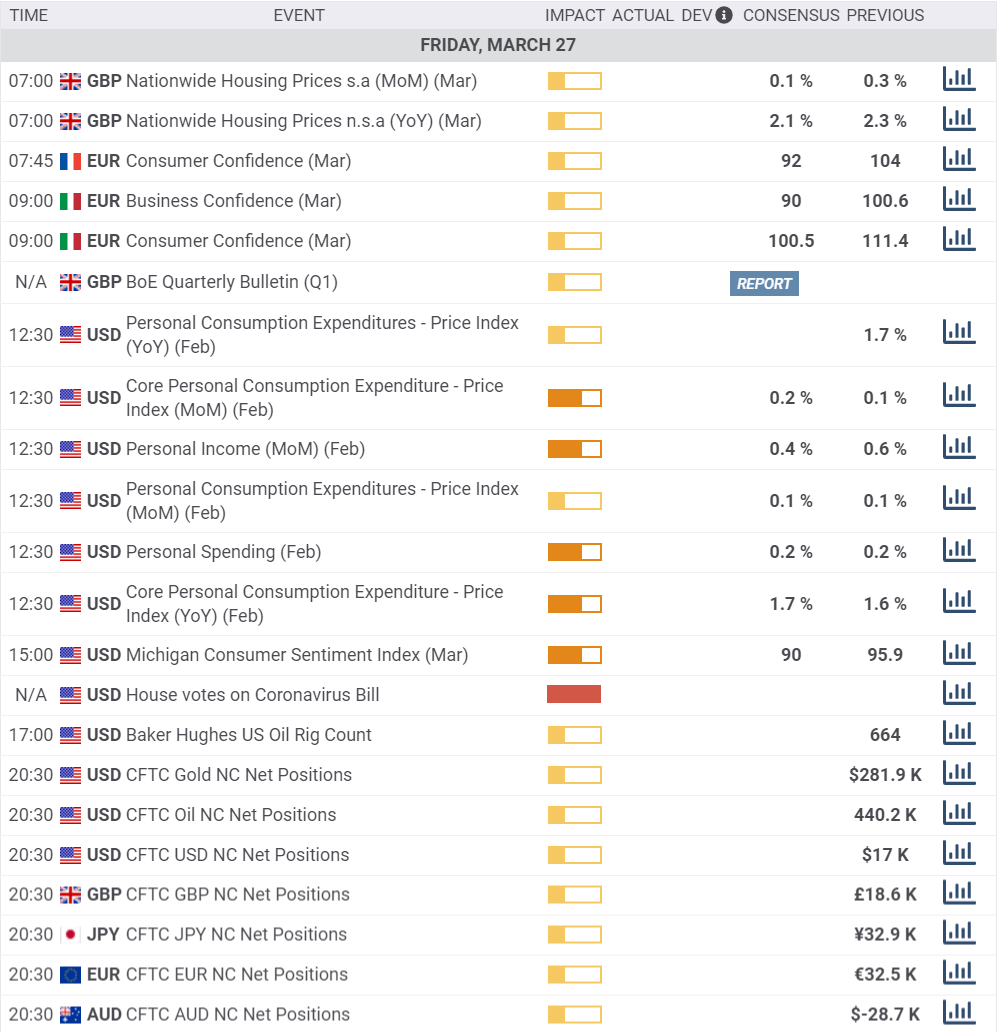