The greenback finished the week stronger against all of its major rivals, despite horrid March employment data. The Nonfarm Payroll report showed the country lost in the month 701K jobs, while the unemployment claim jumped from 3.4% to 4.4%, and the Labor Force Participation Rate declined to 62.7%. Wages were better than anticipated, up by 0.4% MoM and by 3.1% YoY. The EUR/USD pair fell to 1.0772, settling just above the 1.0800 threshold, as the dollar gathered additional momentum following the release of the official ISM Non-Manufacturing PMI, which resulted at 52.5 against the 44 expected.

The US Federal Reserve announced on Friday it would dial back the daily pace of bond-buying to $50 billion a day starting this week, down from the initial buying of $75 billion, a positive sign toward some financial stability. Still, the coronavirus pandemic continues to lead the way. The crisis extends as the virus takes its global toll, with over 1.2M reported cases and more than 65,000 reported deaths.

This Monday, the EU will release the April Sentix Investor Confidence Index foreseen at -11.1 vs the previous -17.1. Germany will publish February Factory Orders, while the US macroeconomic calendar has nothing relevant to offer.

The EUR/USD pair is at risk of extending its decline, as it has broken below the 61.8% retracement of its latest daily advance at 1.0830. In the daily chart, the pair is developing far below all of its moving averages, with the 20 DMA accelerating south below the larger ones. Technical indicators have resumed their declines after correcting oversold conditions. In the 4-hour chart, the pair is also developing below moving averages, with the 20 and 100 SMA gaining bearish strength. Technical indicators in this last time-frame have bounced from daily lows but remain within negative levels. 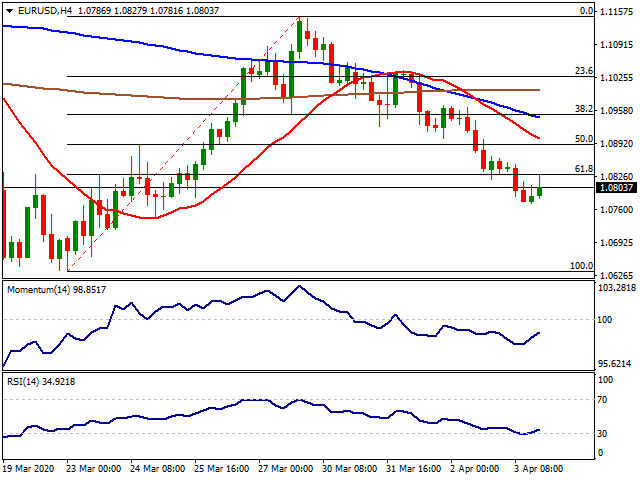 The USD/JPY pair advanced for a second consecutive day on Friday, to close the week with modest gains at around 108.35. The pair advanced on persistent dollar’s demand and despite the sour sentiment that dominated financial markets. By the end of the week, equities came under selling pressure, while US Treasury yields lost ground, limiting the bullish potential of USD/JPY.

By the end of the week, Japan released the March Jibun Bank Services PMI, which resulted at 33.8, better than the 32.7 but much worse than the 46.8 from February. The country won’t release macroeconomic data this Monday.

The daily chart for the USD/JPY pair shows that it settled within directionless moving averages, although above the 38.2% retracement of its latest bullish run. Technical indicators in the mentioned chart have bounced from their midlines, skewing the risk to the upside without confirming it. The pair would need to firm up beyond 109.20, the next Fibonacci resistance level, to be able to extend its advance. In the 4-hour chart, the pair offers a neutral-to-bullish stance, as its holding at the upper end of converging moving averages, while technical indicators are directionless, but above their midlines. 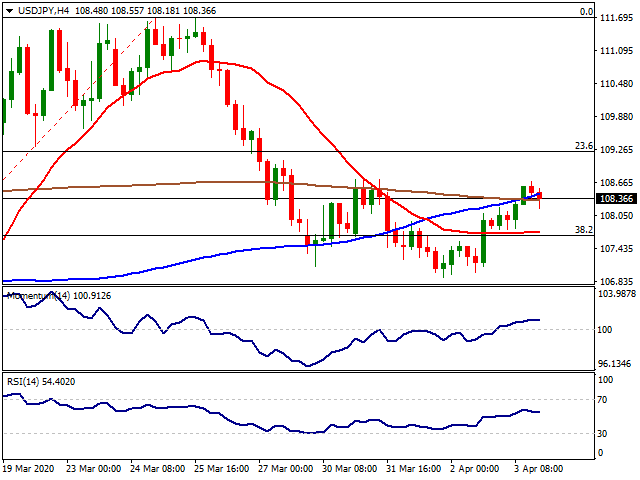 The GBP/USD pair ended the week with losses around 1.2270, although it held at the upper end of its previous weekly range. The pair fell to 1.2204 on Friday amid the resurgent dollar’s demand, although meeting buyers around the level, as the Pound remains resilient. On Friday, Markit released the final version of the UK March Services PMI, which was downwardly revised to 34.5 from a preliminary estimate of 35.7. At the beginning of the week, Markit will release the March Construction PMI for the kingdom, previously at 52.6.

The Sterling may well give up to the UK’s reality in the upcoming days. The number of deaths in the kingdom is doubling on a daily basis, with a health system that was already weak ahead of the coronavirus pandemic.  The “herd immunity” government’s approach before changing to lockdown, will take its toll and could force authorities to take tougher measures.

The GBP/USD pair has finished the week just below the 50% retracement of its latest daily decline, after meeting sellers throughout the week just ahead of the 61.8% retracement of the same decline. In the daily chart, the pair is barely holding above a bearish 20 SMA, while technical indicators have lost their strength upward after reaching their midlines. Shorter-term, and according to the 4-hour chart, the pair is neutral-to-bearish, trading below its 20 SMA, while technical indicators hover within negative levels, without clear directional strength. 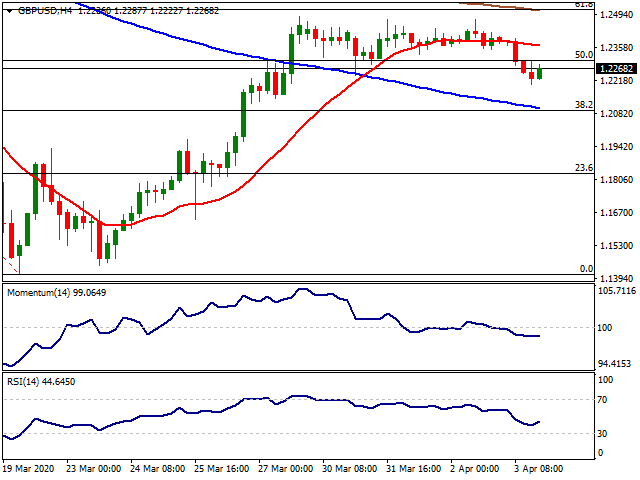 The AUD/USD pair extended its decline at the end of the week to finish it just below the 0.6000 level, as the Aussie couldn’t bare with the dollar’s self-strength, neither with the dismal tone of worldwide equities. The pair fell since early Friday, as data coming from Australia came in worse-than-anticipated. The AIG Performance of Construction Index fell to 37.9 in March from 42.7 in February- Also, the Commonwealth Bank Services PMI for the same month was downwardly revised to 38.5. The country will release the March TD Securities Inflation estimate this Monday, previously at 1.6% YoY.

The AUD/USD pair is bearish according to the daily chart, as, throughout the week the pair has met sellers around a firmly bearish 20 SMA. Technical indicators in the mentioned chart have recovered from extreme oversold readings, the Momentum now flat below its mid-line and the RSI resuming its decline, currently at 36. The risk is skewed to the downside, with the immediate support level now at 0.5960. 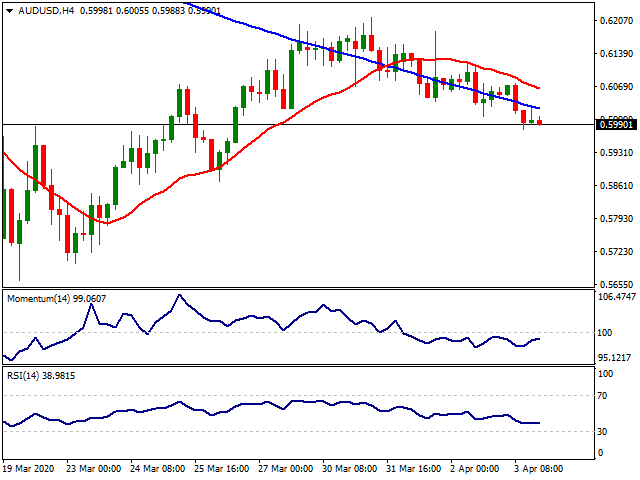 Gold managed to stay over the 1.600$ before the short trading week with a slight weekly fall. On Friday, the job market data set created chaos as expected after two consecutive record-breaking initial jobless claims data set. As the pandemic gets slower and lockdowns started to ease in China already, death tolls in Italy and Spain started to decline in average while the US became the new centre of the pandemic. While the USD stands its ground holding the 100.00 levels, Gold found extra support with the inclining Oil price which is supported by a possible deal between Saudi Arabia and Russia. Last but not least, due to disruption in production is causing a shortage of precious metal supplies. 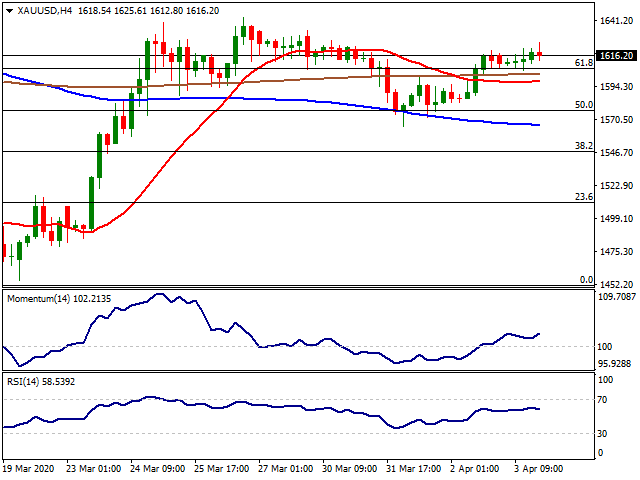 Silver -again- failed to capitalise the positive mood seen on Gold on Friday after the white metal rallied on last Thursday. While the gold to silver ratio keeps around high levels indicating a room for improvement, Silver can’t sustain its bullish runs. On the supply side, the lockdown in Mexico which supplies almost quarter of the world’s physical Silver is creating a shortage in physical Silver. As most of the industries need Silver for manufacturing, the current shortage might support the Silver prices in the coming weeks if the coronavirus pandemic eases. 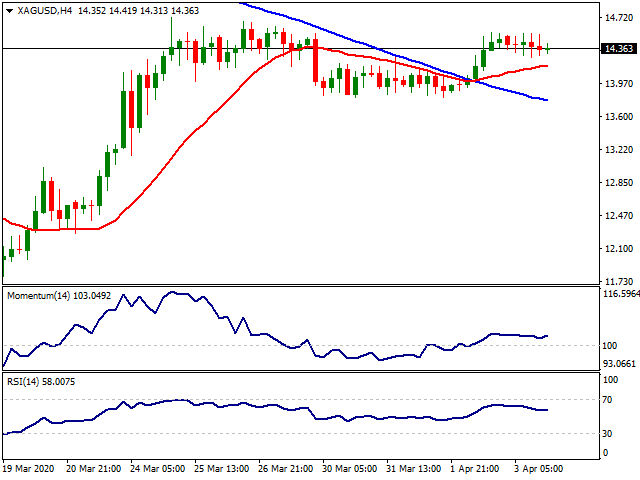 Oil markets are still capitalising the news about a possible OPEC+ agreement for a significant production cut. US President Trump said that Russian President Putin and Saudi Crown Prince Mohammed bin Salman have agreed to reduce production by 10-15 million barrels per day after a telephone conversation between three leaders on Thursday. On the other hand, if OPEC requests the US to join the production cuts this action will not be possible as it's forbidden by US legislation. The emergency meeting will take place today. 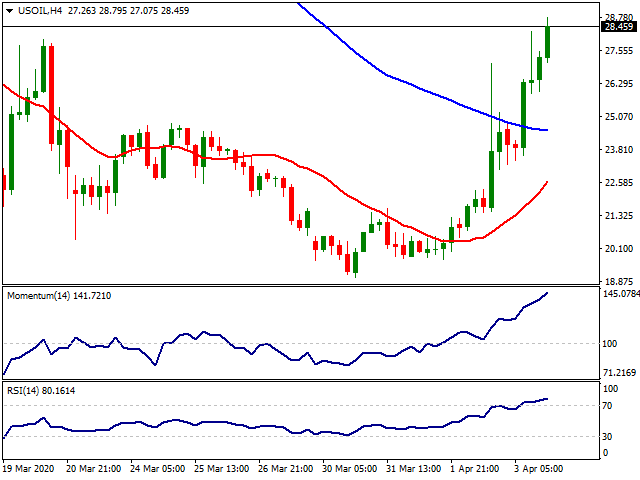 Dow Jones extended its retracement but managed to hold over 21.000 levels on Friday. The data published by the US Bureau of Labor Statistics showed that Nonfarm Payrolls declined by 701K in March. Additionally, the Unemployment Rate rose to 4.4% from 3.5% in February as a result of the coronavirus pandemic limiting almost all economic activity. On the other hand, the March official ISM Manufacturing PMI surprised to the upside with 49.1, while the ISM Services PMI came in at 52.5, much better than the 44 expected limiting the move down. This week the markets will follow the OPEC+ emergency meeting and FOMC minutes on Wednesday as it will be a short week due to Easter holiday. 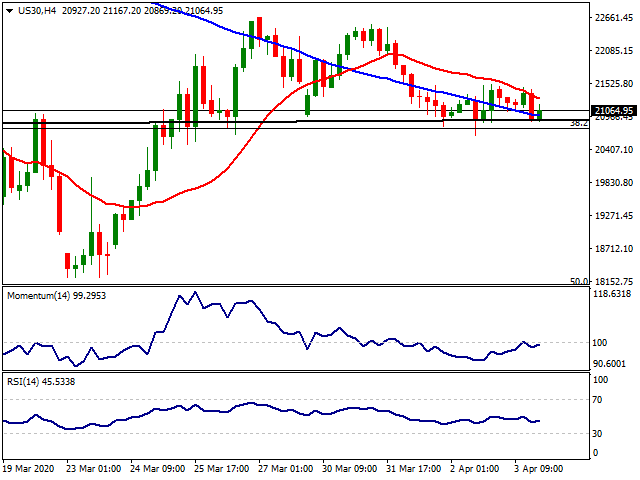