Trading was dull on Friday, as most markets remained closed due to Good Friday Holiday. Majors consolidated within tight ranges, with the EUR/USD pair finishing the week in the 1.0930 price zone, holding on to weekly gains. The greenback remained under pressure after the US Federal Reserve announced new lending plans of $2.3T to support the economy. Meanwhile, EU finance ministers agreed on a €540 billion stimulus relief package via the European Stability Mechanism, meant to support member states. Concerns about economies heading into recession in the middle of the coronavirus pandemic were behind such announcements, meant to cap the effects of a recession.

The crisis, however, continues. The number of cases just in the US has passed half a million, with deaths in the country in the hundreds.  The contagion curve is giving signs on flattening in Spain and Italy, but the number of cases in Europe keeps rising. The largest world’s economies are in a stalemate, and there are no indications on when this situation can change.

The EUR/USD pair ended the week with gains just ahead of 1.0950, the 38.2% retracement of its late March rally. Its bullish potential is limited, as gains are the result of investors dumping the dollar rather than of sudden demand for the EUR. In the daily chart, the pair is neutral, as it has settled above a bearish 20 DMA but remains below the larger ones. The Momentum indicator entered positive territory, but the RSI remains within neutral levels, both flat at the end of the week.  The same goes for the 4-hour chart, as technical indicators lack directional strength within positive levels, while the price hovers within directionless moving averages. 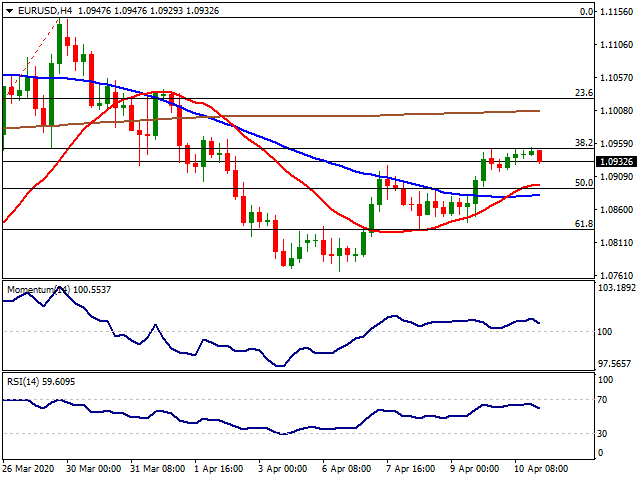 The USD/JPY pair trimmed its early gains and closed the week unchanged near 108.20, the low from these last few days. The Japanese yen benefited from its rival’s weakness, although firm equities and steady Treasury yields kept movements limited. Wall Street rallied on Thursday, backed by the US Federal Reserve’s announcement about a new loans plan, leading to some gains in those markets which remained open in Good Friday. As for government debt, the yield on the benchmark US 10-year note settled at 0.72%, holding on to most of its weekly gains.

Japan released on Friday the March Producer Price Index, which declined by 0.9% in the month, and slid 0.4% when compared to a year earlier. Bank lending, in the same month, rose by 2.0%. At the beginning of the week, the country will release March money data. Trading could be choppy as most markets will remain closed due to Easter Monday.

The USD/JPY pair has remained below a Fibonacci resistance level at 109.20 after reaching a weekly high of 109.38 on Monday. The pair is technically bearish-to-neutral according to the daily chart, as it´s now hovering around its 200 SMA while below the shorter ones, all directionless. The Momentum indicator heads lower within negative levels, while the RSI is flat around 50. In the 4-hour chart, the pair lacks clear directional strength, although the risk is skewed to the downside, as technical indicators remain flat below their midlines as the price develops within directionless moving averages. 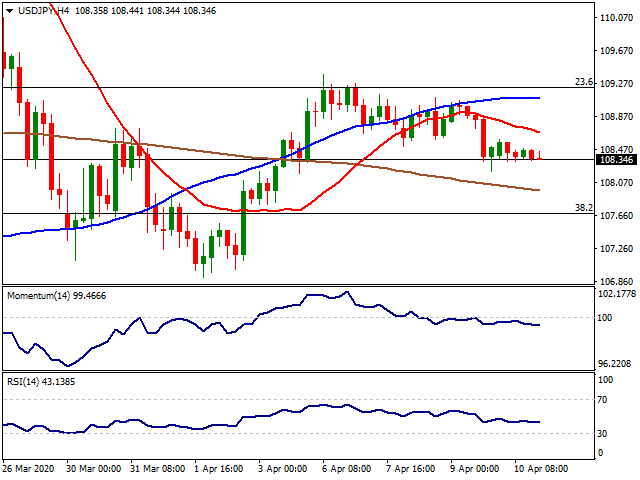 The GBP/USD pair has finished the week with gains around 1.2450, after topping at 1.2486 on Friday. It was the third consecutive week the pair reached the 1.2480 price zone and was unable to advance beyond it. The Sterling benefited from the broad dollar’s weakness and news indicating that UK PM Johnson is recovering from coronavirus. After spending some days in the ICU, reports came on Thursday that he was moved out of intensive care, bringing some relief to those concerned about the UK leadership. There are other Cabinet members affected by coronavirus and quarantine, and Raab continues to lead the kingdom.

Meanwhile, the pandemic continues spreading in the UK with roughly 80,000 cases and the death toll nearing 10,000. The late response of the UK government to the pandemic suggests that the crisis may deepen in the upcoming weeks. Most markets will remain closed this Monday, included London, with no data scheduled to release.

The GBP/USD pair is trading at the upper end of its latest range and close to a critical Fibonacci level, the 61.8% retracement of its latest weekly slump at 1.2515. In the daily chart, the pair is neutral-to-bullish as it extended its advance above a now flat 20 SMA, while the Momentum indicator advances in overbought territory. The RSI, however, is flat around its mid-line. In the shorter-term, and according to the 4-hour chart, the bullish potential is limited, given that the pair is hovering around its 20 and 200 SMA, both directionless, while technical indicators turned south, nearing neutral readings. Things could change if the pair firms up above the mentioned Fibonacci resistance. 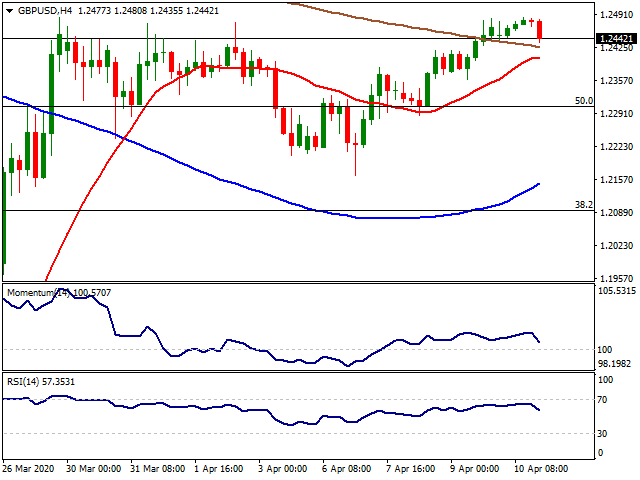 The AUD/USD pair held on to gains and finished the week at 0.6345, a one-month high. The Aussie was supported by the broad dollar’s weakness and resurgent equities, but also by resurgent gold prices. The commodity rallied to a one-month high, while futures hit a seven-and-a-half years’ high as, despite the advance in stocks, investors keep buying the safe-haven metal. Uncertainty over the outcome of the ongoing coronavirus crisis is set to maintain the metal on demand.

On Friday, China released March inflation data, which fell by 1.2% in the month and 1.5% when compared to a year earlier, missing the market’s expectations. The country also released Money Supply for the same month, which rose 10.1%. Australian markets will be closed during the upcoming session amid Easter Monday.

The AUD/USD pair has room to extend its advance, as, in the daily chart, it has firmed up above a now flat 20 DMA. Technical indicators hold well above their midlines, having partially lost their bullish strength. The pair continues to develop some 400 pips below bearish 100 and 200 DMA. In the shorter term, and according to the 4-hour chart, the pair is neutral-to-bullish, as technical indicators have turned modestly lower, although well above their midlines, while the price remains far above all of its moving averages. 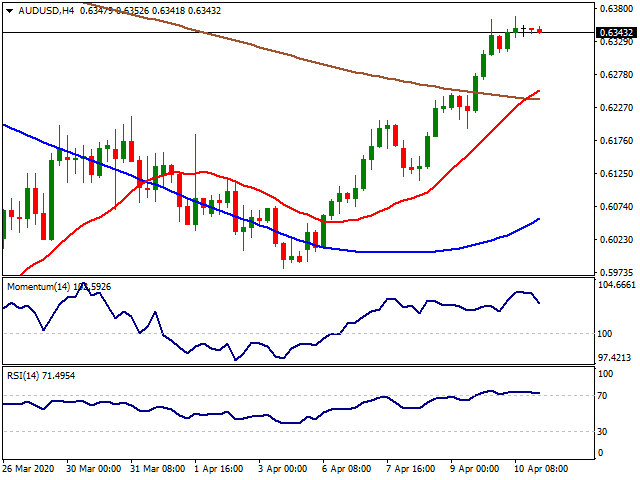 Gold kept its move up on Good Friday towards its highest levels in the last seven years. Now the centre of the pandemic becomes the US as the death toll surpasses 20.000 on weekends. However, the rate for new cases and casualties began to curve down in Spain and Germany after China. On the other hand, The US central bank has announced a new program under which it can buy back corporate bonds up to BBB-/Baa3 which are rated on March 22nd. Due to leverage, the volume of purchases under this program may reach $2.3 trillion. FED’s massive expansion is still yet to pressurize the USD and support precious metals as the DXY index still holds its mid-99.00 levels. While the uncertainty surrounding the markets about the aftermath of the markets drives Gold prices, also, a cheap USD is creating a demand both in the US equity markets and Gold. 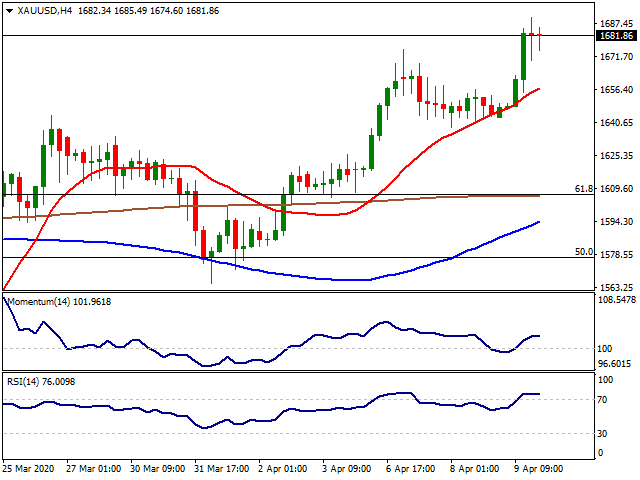 Silver tried to regain lost ground on Friday while the majority of the markets were closed due to Easter Holiday. Despite the move up, the white metal failed to break the important 15.55$ resistance. The demand for precious metals improved as the FED announced that it was going to inject $2.3 trillion in additional loans while US jobless claims are above 6.6 million, which was another catastrophic result. Due to improvements in China as the possibility of production activity to return normal, the pullbacks seen in silver might be a chance for long positions for the long run. 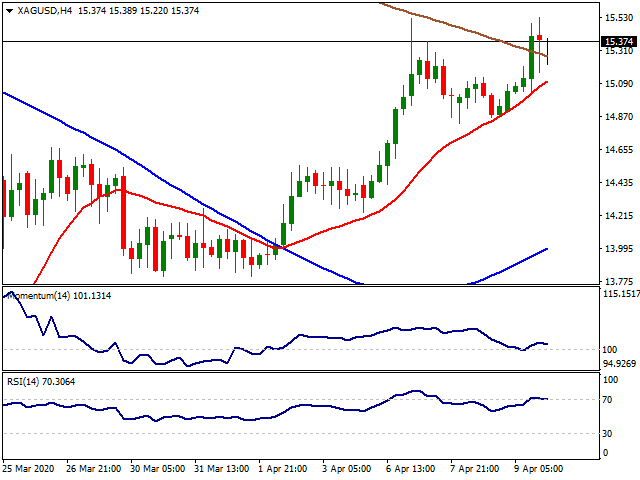 WTI suffered losses on Friday as Mexico vetoed the production cut deal. The Opec deal was covering a slash of a %10 of the global supplies after the price war between Saudi Arabia and Russia. The OPEC+ sources said that Mexico is not happy with it a new quota of 1.353 million BDP as the country plans to unveil a $13.5 billion energy investment package to help state oil company Pemex raise its production to 2 million BDP by the end of the year. On the other hand, the US signalled that they might be willing to make further cuts to allow Mexico to make less reduction in production. While the markets were closed due to Easter Holiday on Friday, G20 energy minister’s meeting hosted by Saudi Arabia did not create a statement regarding the production cut. 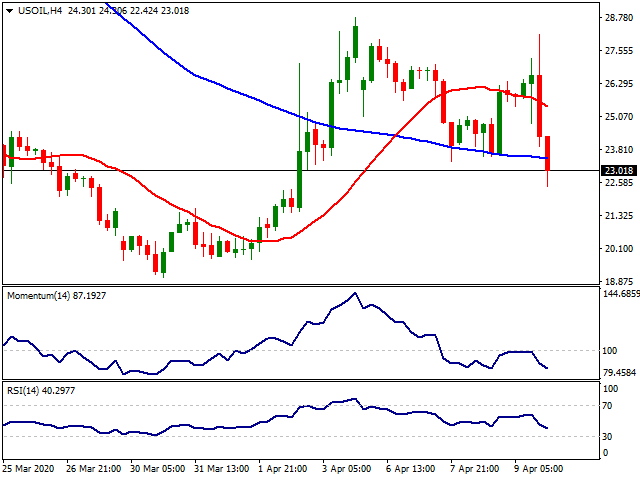 Wall Street was closed on Friday due to Easter Holiday after ending the week with 2.000 points gain. The FED announced a new bond-buying program on Thursday up to  BBB-/Baa3 levels. Fed’s benchmark will be the rating made on March 22th as the rating agencies made a massive cut. The scope of the program is planned to be around 2.3 trillion $. In the long run, the balance sheet of the FED will expand enormously as the central bank will literally print money to fund the latest QE programs. On the labour market side, the number of Americans filing for UI for the first time slipped for the first time in about a month but considering that total initial filings were still hitting 6.6 million in the week of April. This week the markets will focus on Chinese trade balance data set on Tuesday and retail sales data on Wednesday followed by initial jobless claims data on Thursday. 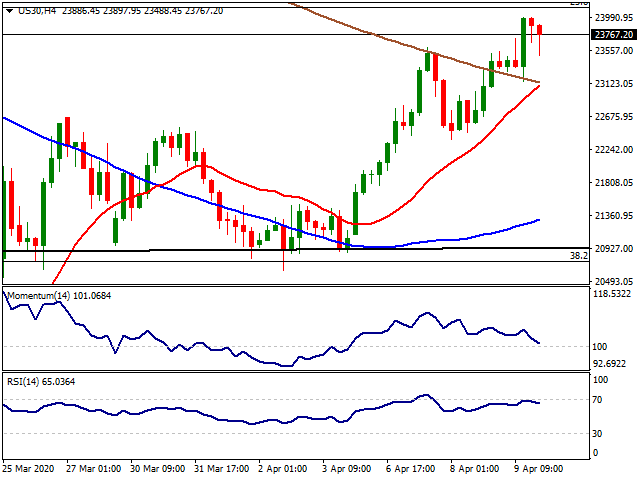