The American dollar traded unevenly against its major rivals this Tuesday, with the EUR/USD pair recovering from a daily low of 1.0816, to close the day with modest losses around 1.0840. The shared currency was resilient to broad dollar’s demand, this last exacerbated by the continued decline in crude oil prices keeping global equities in the red.  The pair flirted with the lower end of its latest range and bounced, suggesting increased buying interest ahead of the 1.0800 figure. The focus remains on crude oil prices.

Data released this Tuesday was mixed, as the German ZEW survey surprised with upbeat business confidence. The country’s Economic Sentiment recovered to 28.2 in April, while for the Union it printed at 25.2, also much better than anticipated. Nevertheless, the assessment of the current situation in Germany collapsed to -91.5 from -43.1. The US published Existing Home Sales, which decline in March by 8.5%, missing the market’s expectation. There won’t be relevant data from these economies on Wednesday.

The EUR/USD pair is trading just above 1.0830, the 61.8% retracement of its latest daily advance. An intraday recovery met sellers near 1.0890, the 50% retracement of the same advance. The short-term picture skews the risk to the downside. In the 4-hour chart, the pair is developing below all of its moving averages, although their directional strength is limited. Technical indicators are neutral-to-bearish, the Momentum around its mid-line and the RSI at around 44. 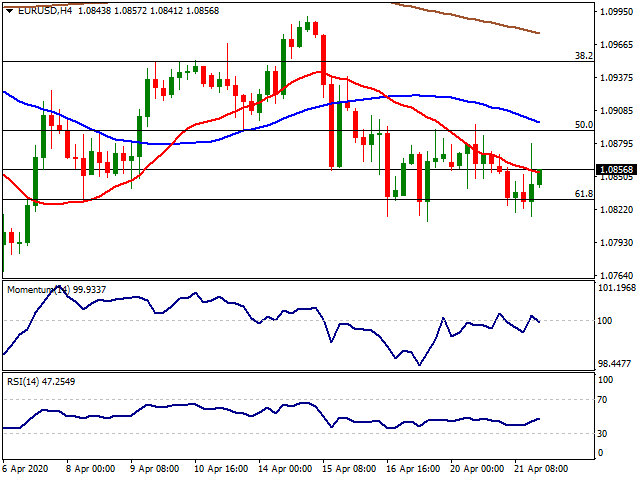 The USD/JPY pair edged lower during Asian trading hours, although later recovered from a daily low of 107.27, to settle within familiar levels around the 107.70 level. Risk aversion kept demand for both currencies evenly balanced for most of the day, although the greenback has had a slight advantage against its Asian counterpart since the beginning of the pandemic crisis.

Global equities edged lower and closed in the red, while US Treasury yields fell to their lowest since last March. The yield on the benchmark 10-year note touched an intraday low of 0.54% to finish the day at 0.57%. Japan didn’t release relevant data this Tuesday, although during the upcoming session the country will unveil the preliminary estimate of the April Jibun Bank Manufacturing PMI, previously at 44.8. The country will also publish the final version of the February Leading Economic Index, foreseen unchanged at 92.1.

The USD/JPY pair maintains its neutral short-term technical stance. The 4-hour chart shows that it’s trading around congesting moving averages, which remain confined to a tight range and directionless. Technical indicators hover around their midlines without clear directional strength. The downside seems limited amid resurgent demand for the greenback in the case risk sentiment deteriorates. 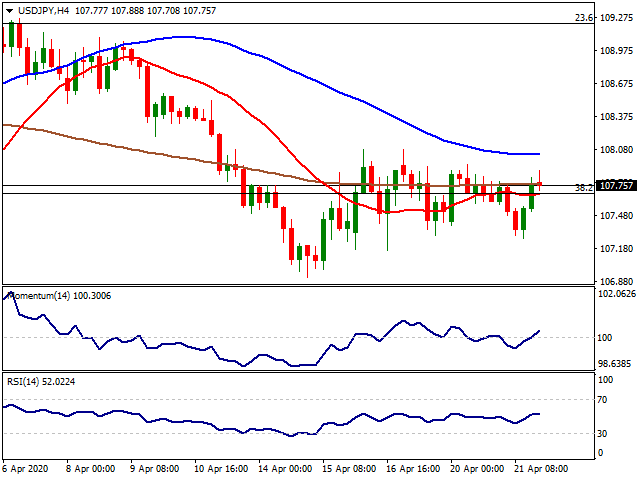 The GBP/USD pair fell to a fresh two-week low of 1.2246 to close the day not far above this last. The UK released its monthly employment data, which was quite discouraging, mainly as numbers from back to February, missed the market’s expectations, hinting worsening numbers ahead. The ILO unemployment rate for the three months to February rose to 4.0%, while Average Earning Including Bonus in the same period decreased to 2.8%. A positive surprise was the March Claimant Count Change which was up by 12.1K, much better than the 172.5K expected.

Sterling slump could be attributed to the negative ruling sentiment, as the kingdom reported over 800 hospital fatalities in the last 24 hours. Also, the ONS revealed that coronavirus-related deaths were 41% higher in England and Wales than previously reported figures in the week up to 10 April. This Wednesday, the UK will publish March inflation figures. The annual CPI is foreseen at 1.5% from 1.7% previously. The Producer Price Index in the same period is seen down by 3.6%.

The GBP/USD pair has settled below the 50% retracement of its March slump at 1.2301, the immediate resistance. The 4-hour chart shows that it’s now developing below all of its moving averages, with the 20 SMA gaining bearish traction above the larger ones. Technical indicators, in the meantime, remain within negative levels, with the Momentum heading lower and the RSI consolidating within negative levels. 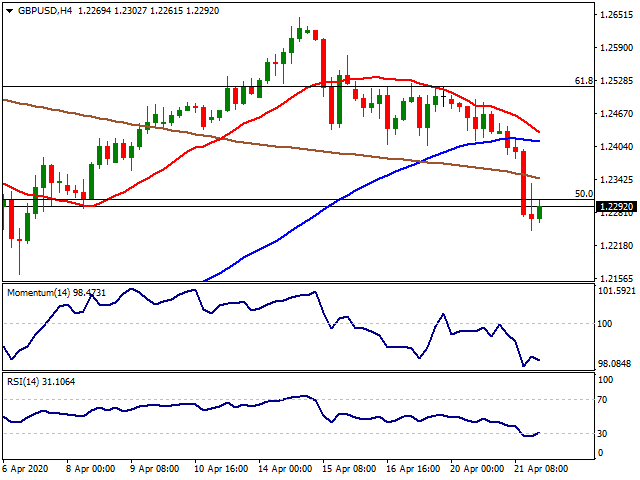 The AUD/USD pair is ending Tuesday just below the 0.6300 figure, recovering from a daily low of 0.6252. The Aussie was undermined by the prevalent risk-off mood but was also affected by RBA’s Governor Lowe speech, as his message was much less optimistic than anticipated.

The central bank released the Minutes of its latest meeting, and the document showed that policymakers agreed to  continue to adjust bond and repo operations as required to support the economy, as the “next few months are going to be difficult ones for the Australian economy.” He added that current record-low rates would likely remain for a very long period of time. During the upcoming Asian session, Westpac will release its March Leading Index, previously at -0.42%.

The AUD/USD pair is gaining bearish potential, as, in the 4-hour chart, it has spent the day below a now flat 20 SMA, although holding above its 100 and 200 SMA. The Momentum indicator turned lower just below its mid-line, although it lacks enough strength to confirm further declines. The RSI, in the meantime, hovers around 43, also skewing the risk to the downside. 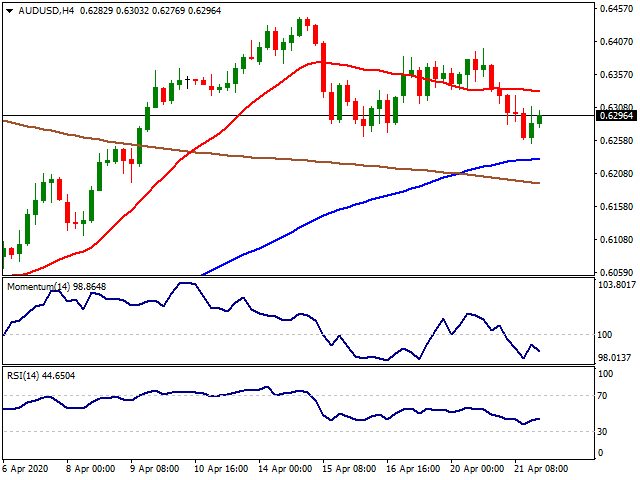 As the sell-off escalated in global equity markets, USD found demand and therefore Gold had a selling pressure on Tuesday. While the markets experienced a price crash in WTI May contracts yesterday, the panic sale still dominated the equity and oil markets. In general, the current situation in the markets shows a clear demand for cash in panic times instead of Gold as the markets used to be. On the other hand, the central bank’s extreme QE measures and negative interest rate policies will likely support Gold in the long run. As an indication to this, the Bank of America Corp. raised its 18-month gold-price target to $3,000 an ounce -- more than 50% above the existing price record -- in a report titled “The Fed can’t print gold.” 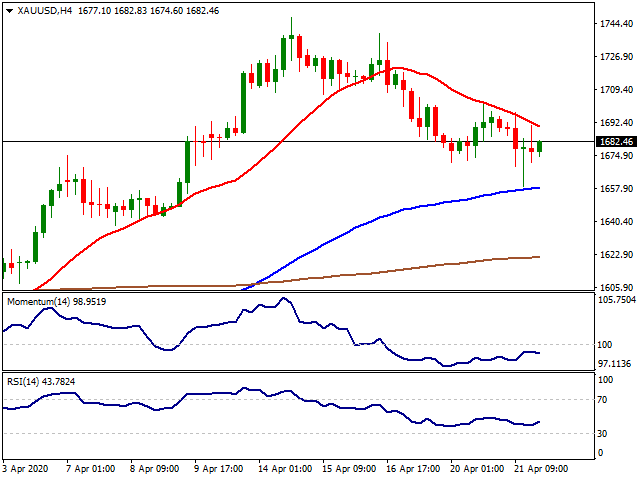 As the flight to safety kicked in the markets, Silver retraced back below 15.00$ pressured by the USD index which had decisive trading over 100.00 levels on Tuesday. The sell-off in the equity markets is triggered mainly by the historic movements seen on oil prices as WTI May contract hit sub-zero for the first time in history yesterday. Currently, the safe haven is considered as cash and as the USD index, DXY rose over 100.00 levels both Gold and Silver faced a sell-off. 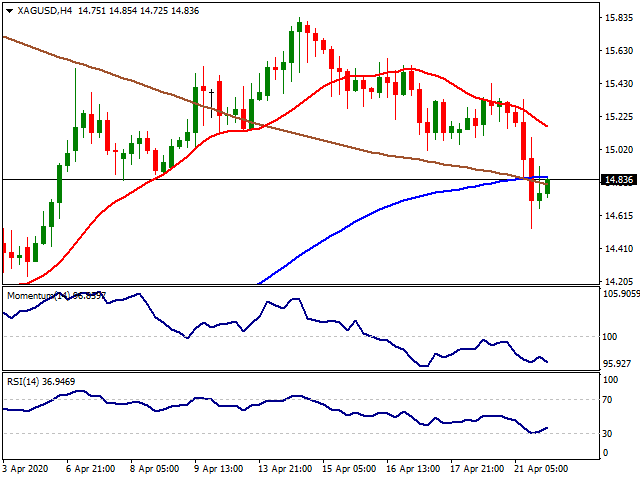 After the historic trading day for WTI yesterday, June contract for the West Texas Intermediate oil faced another selling wave on its first day of trading. While May contract sank to sub-zero levels yesterday for the first time in history due to fears of an upcoming global depression caused by the coronavirus pandemic and excess supply conditions, June contract faced a heavy sell-off too. WTI started the day around 21.00$ levels but as the selling wave escalated, a daily low of 6.60$ was seen on the markets before WTI found some balance around 13.00$ levels. As not much change is expected in the current global economic situation, oil prices will most likely be under pressure in upcoming weeks. 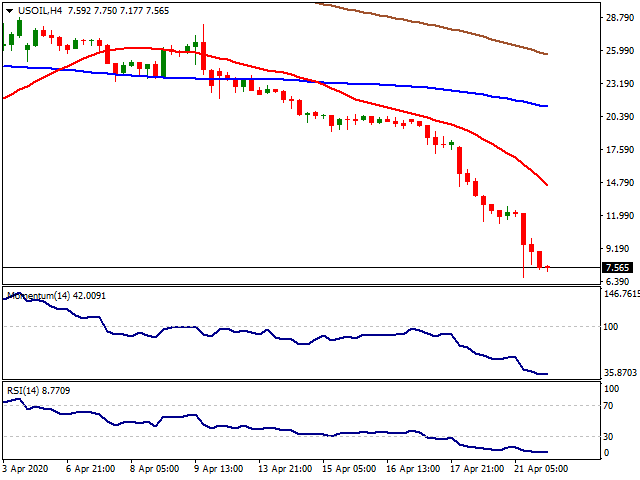 After yesterday’s oil chaos, Wall Street started Tuesday with a bearish gap as the risk sentiment turned to a definite negative. The major equity indexes in the US opened with large losses on Tuesday as sinking oil prices alongside miss-targeted first-quarter earnings figures and financial outlooks from US corporations continue to weigh on market sentiment. Reflecting the intense flight-to-safety, the CBOE Volatility Index, Wall Street's fear gauge, is up more than 8% in the early trade. Earlier in the day, Senate Democratic Leader Chuck Schumer announced that Republicans and Democrats had agreed on a fourth coronavirus spending bill to support small businesses but the news failed to help the market sentiment to recover. Alongside sinking energy shares, the financial indexes faced pressure with a 9% drop in the 10-year US Treasury bond yield. 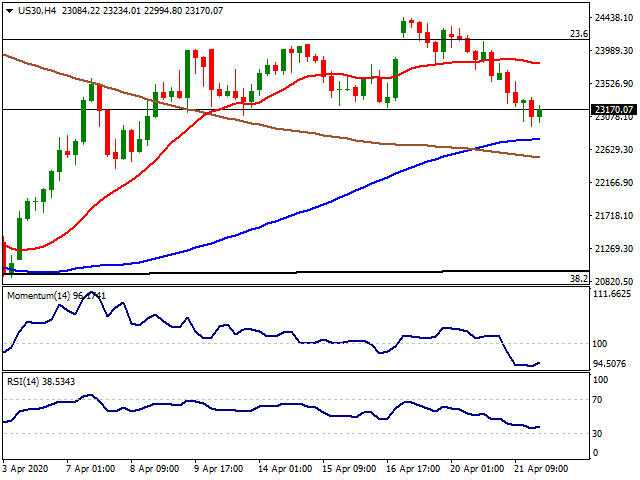