The EUR/USD pair has continued to trade within familiar levels this Wednesday, hitting a daily high of 1.0885 amid a better market’s mood, as crude oil prices finally stabilised. Equities turned green, with global indexes posting substantial gains. The greenback initially came under selling pressure with the better performance of equities, but resumed its advance during the American session.  The pair fell to 1.0802, a fresh two weeks´ low.

Meanwhile, the coronavirus pandemic runs its course. Major economies remain in lockdown, and despite talks about the possibility of reopening, the fact is that the numbers of new contagions and the death toll, both remain too high. Concerns about a second wave, if activity resumes too soon, have led to extensions of the current measures that mean economic recession.  This Wednesday, April Markit will release the preliminary estimates of Services PMI and Manufacturing PMI for the Union and the US. Activity is seen contracting further, although the worst picture comes from Europe. Also, the US will release Initial Jobless Claims for the week ended April 17, foreseen at 4150K.

The EUR/USD pair has broken below the 61.8% retracement of its latest bullish run, although there has been no follow-through. The risk is skewed to the downside, although a steeper decline would be clearer on a break below 1.0790, the immediate support. Technical readings in the 4-hour chart skew the risk to the downside, as the pair is below all of its moving averages, which grind lower, as technical indicators hold within negative levels, lacking directional strength. 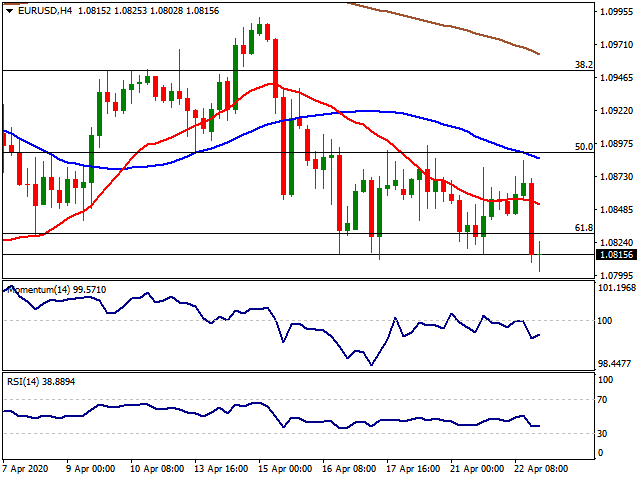 The USD/JPY pair made no progress over the last 24 hours, as it continued to trade around 107.70, the 38.2% retracement of its latest daily advance. Given the persistent uncertainty about when and how the world could be out of the current crisis,  investors are unwilling to get rid of their safe-haven assets. The pair held ground, despite the better performance of equities, as global indexes closed in the green, and a recovery in US Treasury yields. During the upcoming Asian session, Japan will publish the April Jibun Bank Manufacturing PMI, previously at 44.8. The country will also release the final version of the February Leading Economic Index, foreseen unchanged at 92.1.

The USD/JPY pair retains its neutral stance which has now extended for almost two weeks. Technical readings in the 4-hour chart reflect the absence of speculative interest as the pair continues to hover between directionless moving averages, while technical indicators are stuck to their midlines. Growth-related data to be out this Thursday may skew the scale toward one side, but chances of a relevant move remain limited. 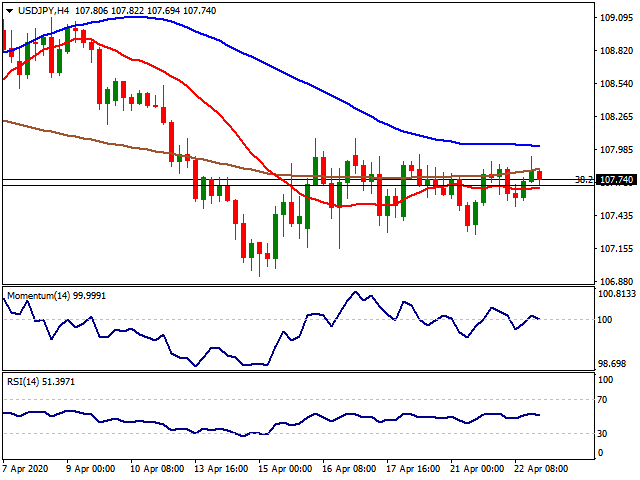 The GBP/USD pair advanced throughout the first half of the day, as the Pound was underpinned by the improved market’s mood. Speculative interest returned to the greenback during US trading hours, which resulted in the pair settling with modest gains just above the 1.2300 figure. UK March inflation figures helped Sterling, as the CPI came in at 1.5% YoY as expected, while the core annual reading printed at 1.6%, also matching the markets forecast. Producer Prices in the same period fell less than anticipated, while the Retail Price Index was up by 2.6%.

Meanwhile, Brexit talks have resumed this week. Talks were making the rounds suggesting a divided opinion within the UK’s negotiation team over whether to seek or not for an extension beyond December 31. The government have stated multiple times that an extension is out of the table, but the coronavirus crisis has come in the way. UK PM Johnson is still recovering and not participating in government. Markit will release this Thursday the preliminary estimate of the UK April Services PMI, foreseen at 29 from 34.5 previously, and the Manufacturing PMI, expected at 42 from 47.8 in March. The kingdom will also publish the GFK Consumer Confidence Index, expected at -40 in April from -9 in March.

The GBP/USD pair maintains a neutral-to-bearish stance in the short-term, despite its modest intraday advance. It is currently trading around the 50% retracement of its March decline, hovering around the level for a second consecutive day. The 4-hour chart shows that the price remains below all of its moving averages, which are confined to a tight range, reflecting the lack of directional strength. Technical indicators, in the meantime, remain directionless within negative levels. 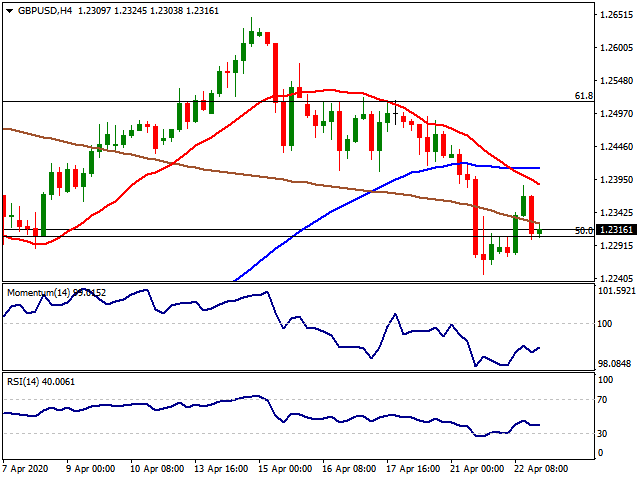 The AUD/USD pair is marginally higher daily basis, trading ahead of the Asian opening in the 0.6320 price zone. The pair peaked at 0.6352 as Australia published a preliminary estimate of March Retail Sales, which rose 8.2% MoM, much better than the previous 0.5%. The Australian Bureau of Statistics decided to release preliminary estimates to provide a better picture of how the economy is performing through the pandemic.

The AUD/USD pair has posted a higher low and a higher high daily basis, usually a sign of further gains ahead. Nevertheless, the 4-hour chart shows that the pair is unable to advance beyond a mild-bearish 20 SMA, while holds above its 100 and 200 SMA. Technical indicators, in the meantime, remain within neutral levels, without directional strength. 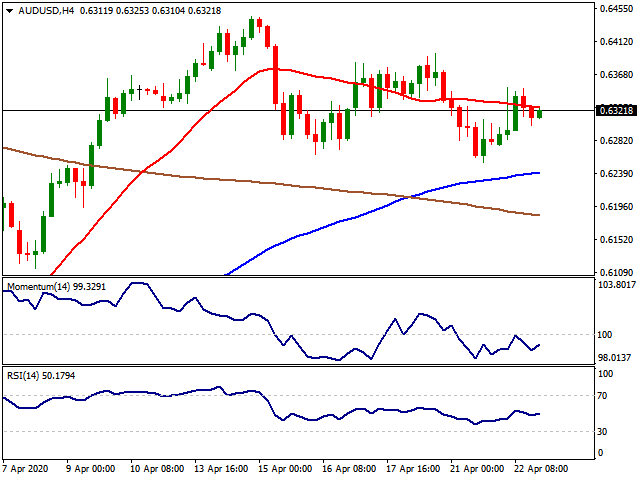 Gold rallied on Wednesday as the tensions rose between the US and Iran. President Donald Trump tweeted Wednesday that he has instructed the US Navy to "shoot down and destroy any and all Iranian gunboats" that harass US ships. On the other hand, Later on, Wednesday senior Pentagon officials said the tweet was a lawful order though it did not mark a change in the rules of engagement. Earlier in March, traders decided to ditch their profitable Gold positions in favour of USD to support their open positions in equity markets. However, extremely low-interest-rate conditions and the QE programs to support pandemic hit economies will most likely to support Gold prices in the mid-term. 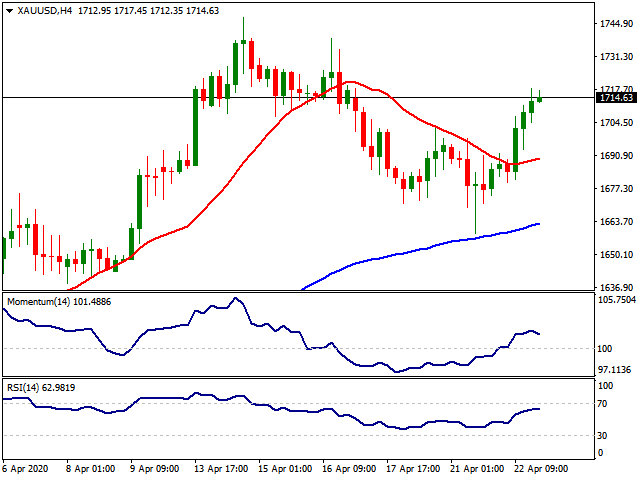 Silver also had a positive trading day on Wednesday but the incline in the white metal was weak again compared to Gold. Despite the sharp moves seen in Gold, Silver is still keeping its trading range between 14.30$ and 15.55$. The data from the Chinese retail precious market showed a slump in overall trade volume due to coronavirus pandemic. Data gathered by Learnbonds.com indicates that revenue from the trade of gold, silver, and jewellery slumped by 47% during the period under review. On the other hand, despite its dull nature of the movement, Silver might be a good buy for the long term in case of normalisation in global economic activity. 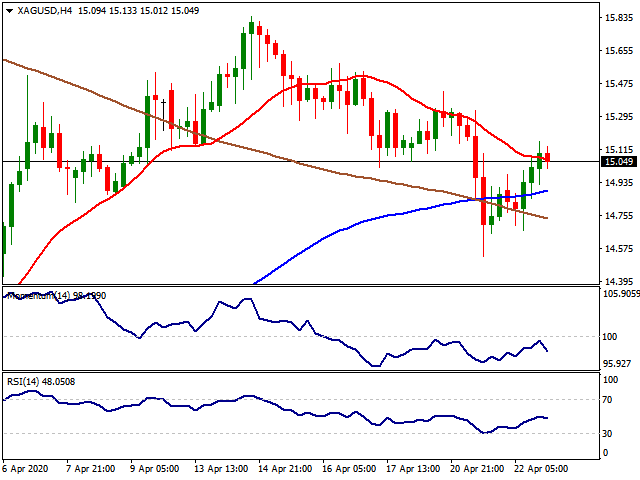 After the meltdown seen in WTI’s May contract, June contract found some balance around 14.00$ levels as the tensions in the Persian Gulf escalated by Trump’s tweet. President Donald Trump tweeted Wednesday that he has instructed the US Navy to "shoot down and destroy any and all Iranian gunboats" that harass US ships. Despite the rising tensions, senior Pentagon officials said the tweet was a lawful order though it did not mark a change in the rules of engagement confronting the situation. US crude stockpiles rose 15.0 million barrels last week, modestly above the consensus estimate, and down from prior week’s record high of 19.25 million barrels.  Backing out storm-related shut-ins oil production only dropped 100,000 barrels a day.  US crude exports gave back last week’s over half a million-barrel rise, while imports fell to the lowest levels since 1992 as physical storage space for Oil is a big problem now in the US. Also, due to oil production nature, oil rigs cannot be shut down as their re-activation cost is high. 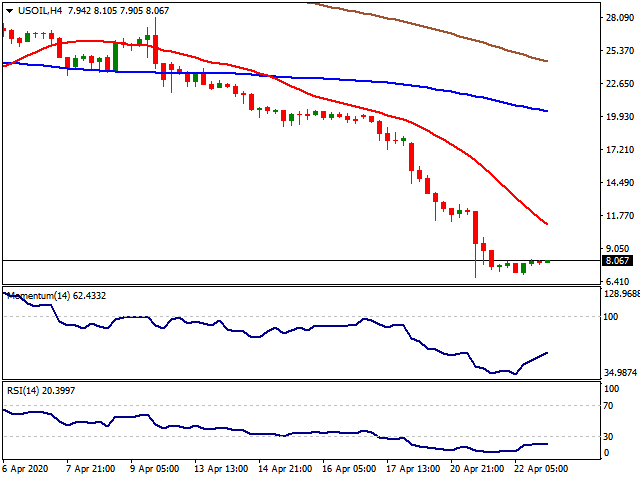 After Tuesday’s sell-off, Dow Jones managed to re-gain its lost ground on Wednesday. Treasury Secretary Mnuchin is hopeful that the next wave of additional funds for small businesses might be enough and that most if not all the US economy will open later this summer. On the other hand, due to a survey made by YPO 11% of global CEOs fear their business won’t survive coronavirus as the hospitality and restaurant sector has the direst outlook, with more than 40% of CEOs saying their businesses may not survive the coronavirus crisis. Wednesday’s upbeat mood in Wall Street mostly supported the recovering energy shares as oil prices managed to find a balance. The CBOE Volatility Index, Wall Street's fear gauge, is down 5.5% on the day to confirm the risk-on atmosphere while Gold also rallied, lifting over 1.700$. 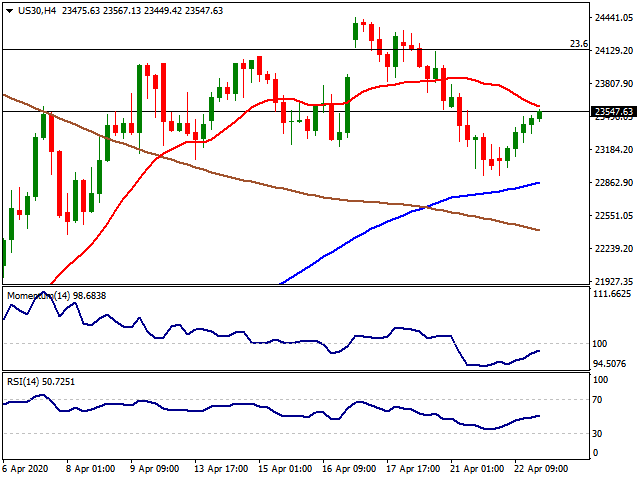