The EUR/USD pair recovered some ground on Friday, closing the week anyway in the red in the 1.0820 price zone. The pair bottomed at 1.0726 amid persistent dollar’s strength, recovering from such a low on the back of profit-taking ahead of the weekend. Data released at the end of the week continued to reflect the effects of the pandemic on the economies. The German IFO survey showed that the Business Climate in April fell to 74.2 from 85.9 in March, below expected. In the US, March Durable Goods Orders fell by 14.4%, also worse than anticipated. The Michigan Consumer Sentiment Index was upwardly revised to 71.8 in April, slightly better than the preliminary estimate.

Monday will be a quiet day in terms of macroeconomic releases, but the upcoming week will be a busy one, as the Fed and the ECB, both will have monetary policy meetings. Also, the US and the EU will release the first estimate of their Q1 GDP, expected to indicate economic contraction.

The EUR/USD pair has settled a few pips below 1.0830, the 61.8% retracement of its latest daily advance. In the daily chart, the 20 DMA maintains its bearish slope, converging with the next Fibonacci resistance at 1.0890. The larger moving averages keep heading south above the shorter one, while technical indicators recovered just modestly, falling short of supporting further gains. In the 4-hour chart, the pair is a couple of pips above its 20 SMA, but below the larger ones, while the Momentum indicator remains directionless below its 100 line. The RSI aims higher around 51, which also falls short of indicating additional advances. The pair would need to recover beyond 1.0900 to reduce chances of a steeper decline, an unlikely scenario at the time being. 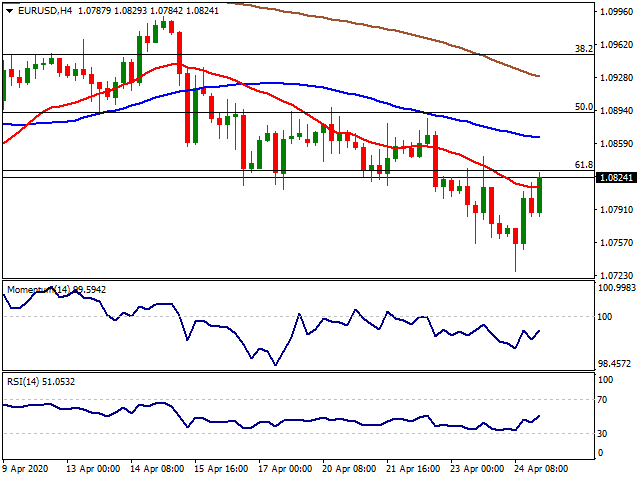 The USD/JPY pair finished the week as it started around the 107.50 price zone, amid continued uncertainty related to the coronavirus crisis. Thought the week, news headlines triggered opposed spikes in risk-related sentiment, but the pair was unable to react to those, but instead remained depressed as there’s no foreseeable end at sight to the pandemic. On Friday,  Japan released national inflation data, which rose by 0.4% in the year to March. The country also released the All Industry Activity Index for February which printed -0.6%.

Meanwhile, US Treasury yields closed the week in the red as well as most global indexes, a sign that the risk-related sentiment remains sour. Japan won’t release macroeconomic data this Monday.

The USD/JPY pair offers a bearish stance in its daily chart, as it settled below all of its moving averages, which anyway lack directional strength. Technical indicators, in the meantime, head lower with uneven strength within negative levels. In the shorter-term, and according to the 4-hour chart, the pair is neutral-to-bearish, also developing below moving averages and with technical indicators hovering within neutral levels with modest downward slopes. 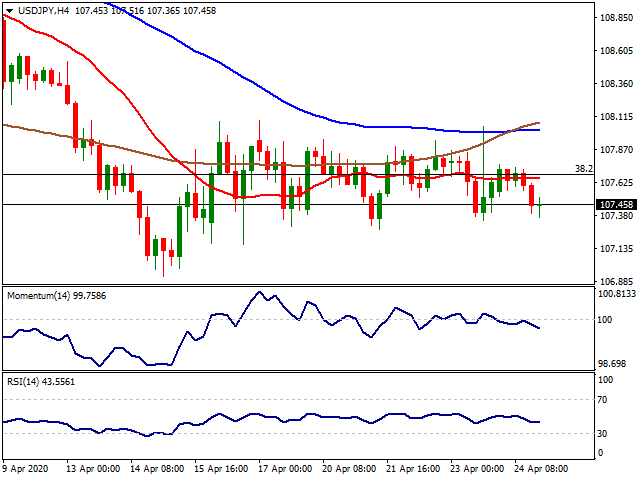 The GBP/USD pair posted a modest advance for a third consecutive day, but remained within familiar levels and finished the week in the red. The pound came under selling pressure during the last European session amid disappointing UK data. Retail Sales in March fell by 5.1%, when compared to the previous month, and by 5.8% when compared to a year earlier. Also, the UK GFK survey on consumer confidence remained at -34 in April, its lowest in over a decade, although slightly better than the -40 anticipated.

Meanwhile, Brexit talks resumed last week, and there are no good news in that front. Over the weekend, EU’s Chief Negotiator Michel Barnier said that negotiations have been disappointing, hinting no progress made. The UK continues to refuse to extend the transition period, despite the ongoing crisis. Over the weekend, German’s Chancellor Angela Merkel warned that the kingdom would need to extend talks. The news may have a negative impact on Sterling at the beginning of the week, moreover as there are no macroeconomic releases scheduled in the kingdom this Monday.

The GBP/USD pair has bounced from around 1.2300 for a second consecutive week but was unable to advance beyond the 1.2400 level. The daily chart shows that a flat 20 DMA capped the upside while technical indicators hover around their midlines, suggesting limited buying interest but instead easing demand for the greenback. In the 4-hour chart, the pair is neutral, confined to a tight range between directionless moving averages, as technical indicators hover around their midlines. Bears could take over on renewed selling pressure driving the pair below the 1.2305 support level. 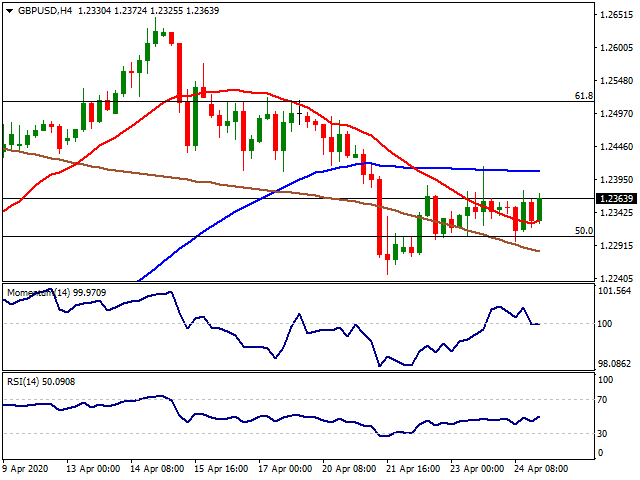 The AUD/USD pair settled just below its weekly high of 0.6405, up in the US session amid weak American data and the positive tone of Wall Street.  The pair was also underpinned by gold prices, as the bright metal neared its multi-year high of $1,747 a troy ounce, as a result of recovering oil prices and easing dollar’s demand. These last few days, Australia released some unprecedented preliminary estimates of March data, aimed to have clearer statistics of the economy throughout the crisis. Such numbers were overall encouraging and helped to keep the Aussie afloat. Australia won’t release macroeconomic data at the beginning of the week.

The AUD/USD pair is poised to extend its advance according to the daily chart, as it continues to develop above a bullish 20 DMA. The larger moving averages maintain their bullish slopes well above the current level, while technical indicators have lost their bullish strength, but hold within positive levels. In the shorter-term, and according to the 4-hour chart, the risk is also skewed to the upside, as technical indicators turned north within positive levels, while the price holds above all of its moving averages. 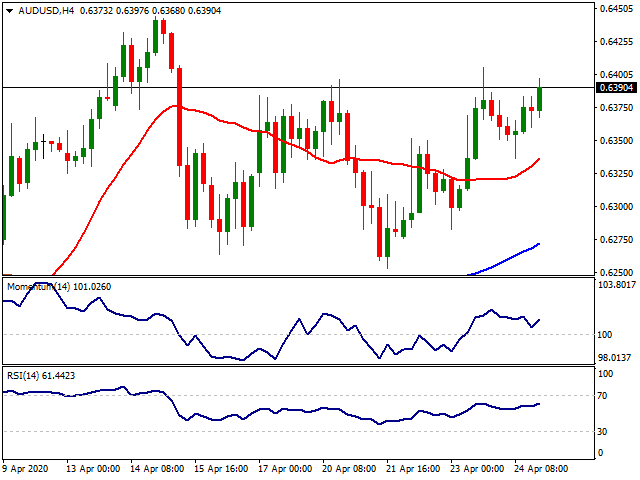 Silver had an uneventful day on Friday as it is still stuck at the higher levels of its consolidation zone. Lately Silver failed to join the Gold rallies most due to its industrial label as the economic slowdown on a global scale concerning the traders. However, due to the World Silver Survey 2020, silver physical investment is forecast to extend its gains this year, with a projected 16% rise to a five-year high as investors rotate out of equities in search of safe haven vehicles. On the other hand, Gold to Silver ratio is now around 112 levels which makes the white metal appealing for the long run. 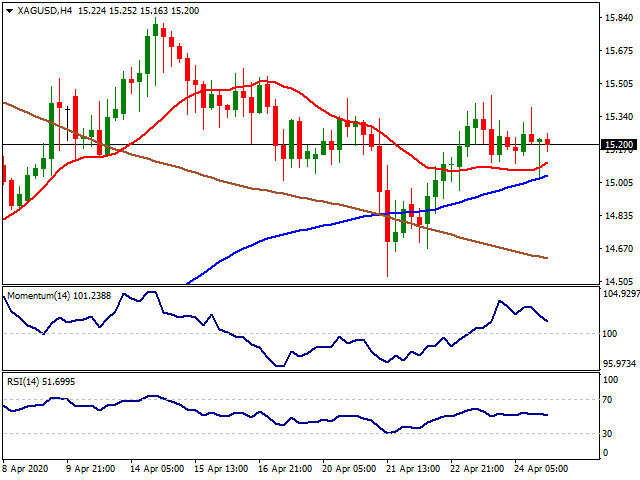 WTI was the most controversial asset last week on the markets as the May contract for US crude sank to sub-zero levels right before its closing for the first time in history. The contract for June started around 21.00$ levels and before finding balance around 17.00$, it tested 10.00$ levels last week. Last Friday, Angola's oil minister Azevedo argued that the current oil output cuts of OPEC+ and other producers wouldn't be sufficient to help the oil market rebalance and producers could be called upon to take more drastic measures. On a similar tone, US President Donald Trump on Friday said Russia and Saudi Arabia could deepen their output cuts. Moreover, Treasury Secretary Mnuchin said the Trump administration was considering the option of buying stakes in energy companies to help the oil and gas industry. On the other hand, the weekly data published by Baker Hughes on Friday revealed that oil drillers in the US cut rigs for the sixth week in a row and brought the total active rig count down to 378 from 438. In the month of April, drillers cut 246 in April to register the largest monthly cut in more than five years. 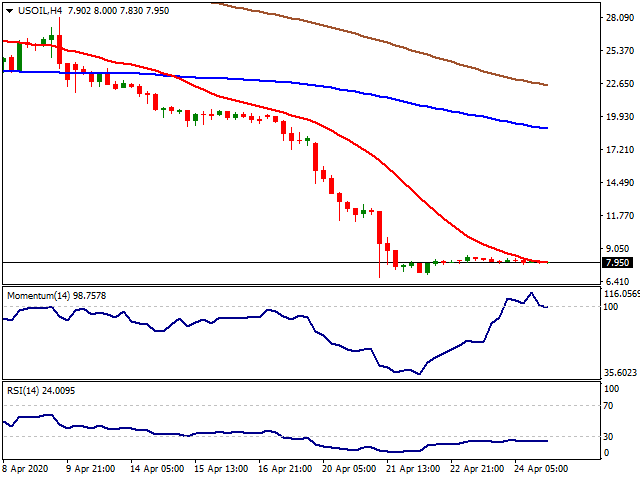 Gold struggled to keep its advance but managed to build a base over 1.700$ on Friday trading. It was a volatile week for the markets where the risk sentiment shifted a couple of times. As a result of the extreme lockdown measures taken by the governments, the case and the death toll in COVID-19 pandemic seem to slow down except for the situation in the US which is the centre of the pandemic at the moment. On the other hand, while the macro data readings are extremely bad due to economic pause, melting oil prices also created pressure in the markets last week. Despite the extreme QE program by the FED and historically low-interest rates, the USD still finds demand therefore DXY keeps its range over 100.00 levels. The highlight of the week is the FED’s interest rate decision and following press conference on Wednesday. Also, the preliminary GDP data will be followed on Wednesday in the US. On Friday the markets will follow the ISM Manufacturing and Employment Index in the US. 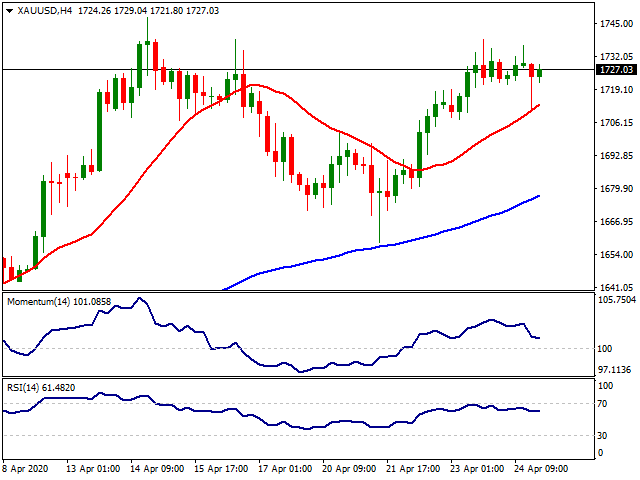 Despite the meltdown seen in ht eUS macro data, Wall Street managed to keep its mood up spending last Friday in relatively narrow range trading. Reflecting the risk-on atmosphere, the CBOE Volatility Index, Wall Street's fear gauge, was down 6.23% in the early trade. After another disastrous initial jobless claims data reading, the US Census Bureau reported that Durable Goods Orders in March declined by 14.4% to $213.2 billion. However, the result did not have any impact on the markets. This week, FED’s interest rate decision and following press conference on Wednesday will be followed by the traders. Also, the preliminary GDP data will be followed on Wednesday in the US. On Friday the markets will follow the ISM Manufacturing and Employment Index in the US. 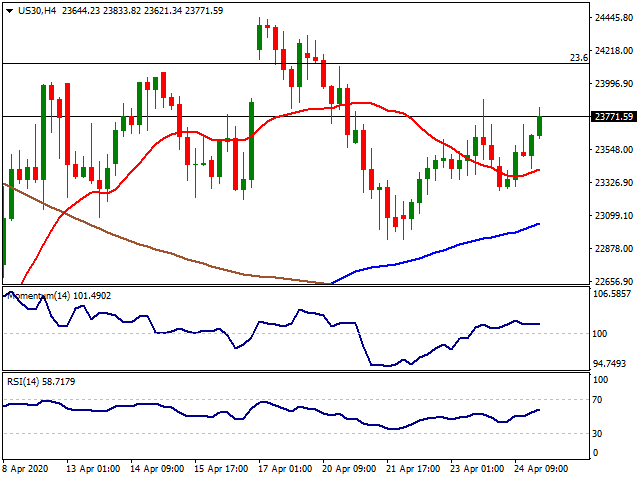