The EUR/USD pair reached a daily high of 1.0998, giving up some ground ahead of the close despite the persistent dollar’s weakness. Equities advanced throughout the different sessions, although the momentum was limited. In general, the market lacked news strong enough to change the previous bias. Still, tensions continue between the US and China, while hopes for a soon-to-come vaccine eased.

In the data front, the EU published April inflation data, which came in worse than anticipated. The annual CPI resulted in 0.3%, below the previous 0.4%. Core annual inflation was of 0.7%, also below the previous. The Union also published its March Current Account, which posted a seasonally adjusted surplus of €27.4 B. The US released MBA Mortgage Applications for the week ended May 15, which fell by 2.6% after advancing 0.3% in the previous week.

This Thursday, Markit will publish the preliminary estimates of May PMIs, seen bouncing from April figures but still well into contraction territory. In the US, weekly unemployment claims are foreseen up by 2.4 million. The Federal Reserve released the Minutes of its latest meeting but failed to trigger some action. Policymakers reiterated that they are committed to using its full range of tools to support the economy.

The EUR/USD pair is trading in the 1.0980 price zone, overbought in the short-term but still poised to extend its advance. In the 4-hour chart, the 20 SMA maintains its bullish slope well above the larger ones, as technical indicators stabilised in overbought territory. The 1.1000 level is a critical psychological barrier and stops are likely gathered just above it. If those got triggered, the rally could continue during the next sessions towards the 1.1120 region. 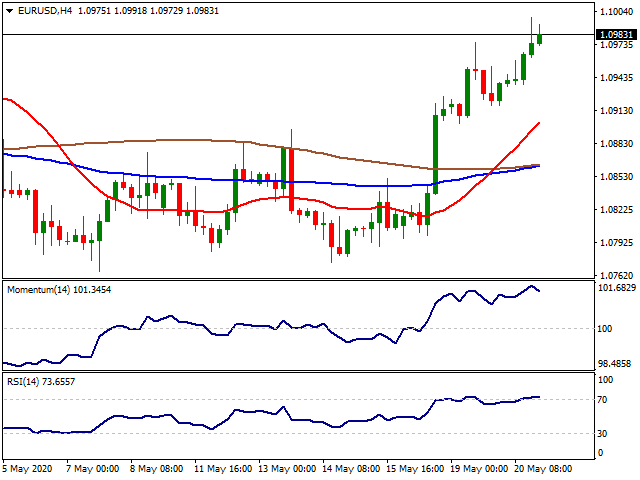 The USD/JPY pair trimmed most of its latest gains over the last few sessions, ending the day at around 107.40. The slide was attributed to the persistent dollar’s weakness, as the pair edged lower despite stocks’ positive performance on the back of hopes of economic reopenings and encouraging earnings reports. US Treasury yields, on the other hand, fell slightly with the yield on the benchmark 10-year note settled at 0.67%.

Japanese data released at the beginning of the day beat the market’s expectations, as Machinery Orders fell in March by 0.4%, much better than the -7.1% expected. When compared to a year earlier, orders were down by 0.7% against the -9.5% forecast. This Thursday, Japan will publish it April Trade Balance, seen posting a surplus of ¥67.4 B, and the Jibun Bank Manufacturing PMI for May, previously at 41.9.

The USD/JPY pair is at risk of falling further, according to the 4-hour chart, as technical indicators have retreated sharply and are about to cross their midlines into negative territory. In the meantime, the pair is trading around convergent moving averages. Below 107.30, the immediate support, the pair has room to extend its decline toward 106.65, a strong static support level. 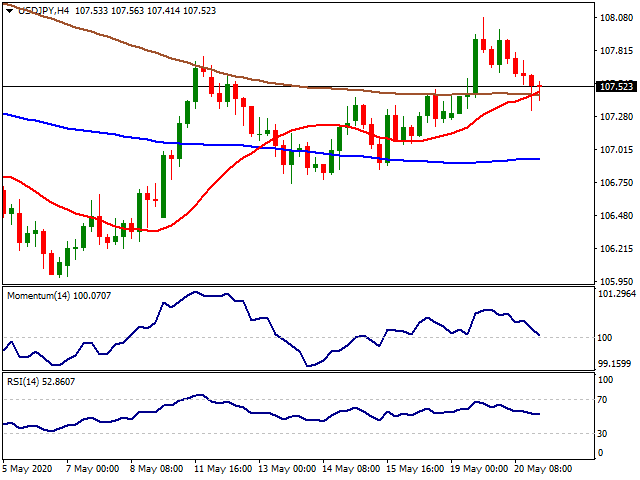 The GBP/USD pair edged marginally lower this Wednesday, ending the day at around 1.2230. Inflation in the UK fell to its lowest in more than three years in April, as the annual CPI rose by 0.8% from 1.5% in March. The news triggered speculation that the Bank of England could deepen its stimulus measures, including pushing interest rates into negative territory. Also, BOE’s Governor Bailey said that he has changed his position on negative rates “a bit.”

This Thursday, Markit will publish the preliminary estimate of the May Manufacturing PMI, foreseen at 36 from 32.6. It will also publish the Services PMI for the kingdom, foreseen at 25 from 13.4. The UK will unveil the CBI Industrial Trends Survey on Orders for May, expected at -59 from -56 in April.

The GBP/USD pair has lost its positive momentum and could extend its latest decline. The 4-hour chart shows that the price is anyway holding above its 20 SMA, and more relevant, above a critical Fibonacci support level at 1.2170. The Momentum indicator heads firmly lower, retreating from overbought readings but still above its 100 line. The RSI, in the meantime, has turned flat at neutral levels. Chances of a steeper decline would be higher on a break below the mentioned 1.2170 level. 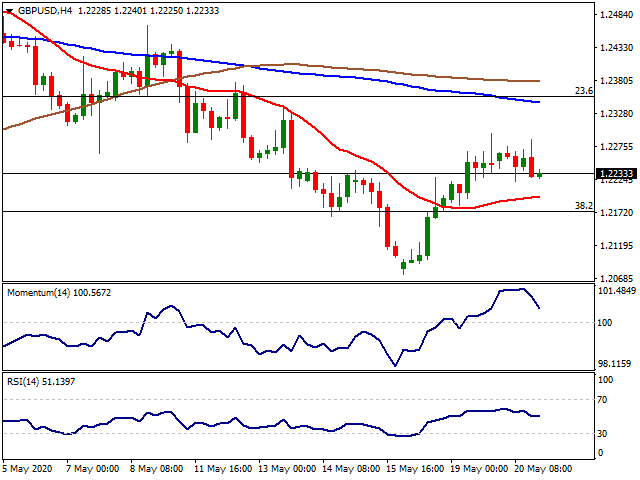 The AUD/USD pair surged to a fresh two-month high of 0.6615, holding around the 0.6600 figure at the end of the US session. The Aussie advanced in spite of some negative news coming from the region. Australia’s Westpac Leading Index fell by 1.5% In May, while tensions mount with its largest trading partner, China. Beijing has imposed punitive tariffs on certain Australian goods, and will likely continue trimming imports from the country, amid Australian decision to support the US investigation on the origins of COVID-19. Stocks posting solid gains underpinned the pair.

This Thursday, Australia will see the release of the Commonwealth Bank PMIs for May. Manufacturing output is foreseen at 46.5 from 44.1. The services index previously printed at 19.5. Also, RBA’s Governor Lowe is due to participate in a panel discussion at the Financial Services Institute of Australasia, in Sydney.

The AUD/USD pair seems poised to extend its advance, as it continues to post higher highs on a daily basis. In the 4-hour chart, the pair is well above all of its moving averages, with the 20 SMA accelerating north above the larger ones. Technical indicators, in the meantime, have lost their bullish strength, but hold on to overbought levels, far from signalling an upcoming bearish move. Further gains are to be expected on a break above the mentioned daily high. 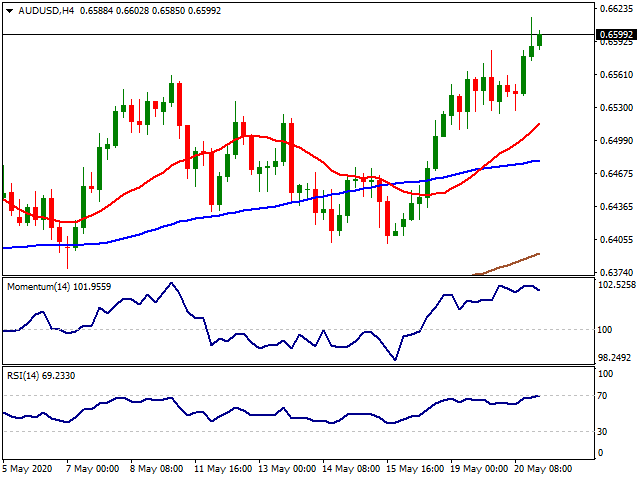 Gold had an indecisive trading day on Wednesday failing to get a clear direction. The risk sentiment on the markets is in a wait and see mode while the USD index DXY is keeping its food down testing 99.00 level. While Wall Street managed to advance on Wednesday, also Gold had marginal gains after a choppy session as the investors are willing to keep a portion of Gold amid positive reports about the coronavirus vaccine. Even if the coronavirus pandemic ends immediately, current extreme liquidity and low-interest rates environment will most likely support Gold prices in the long run. 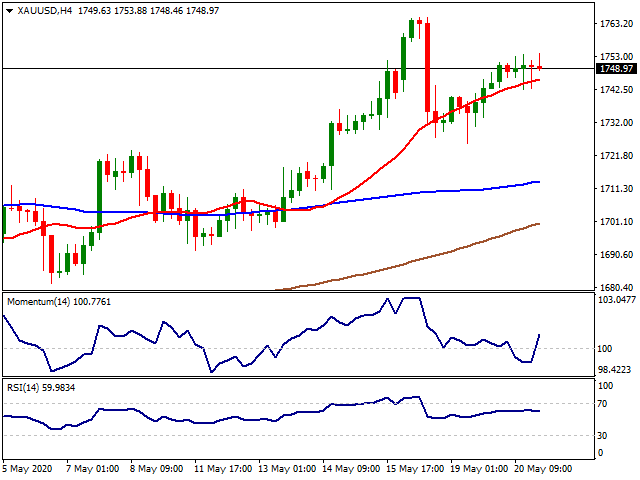 Silver trading was again capped at 17.60$ (%38.20 14.29$-19.65$) which was an important support/resistance level in 2020. Although the white metal failed to pass this important resistance, coronavirus losses are already gained back with the latest bull-run supported by the expectations of an increase in demand as industrial demand began to normalize. Also, as a big indicator of normalization, Gold to Silver ratio continues to ease after hitting all-time highs in March. Therefore, as Silver started to play catch-up with Gold, with the increasing industrial demand Silver might extend its move-up in the coming days. 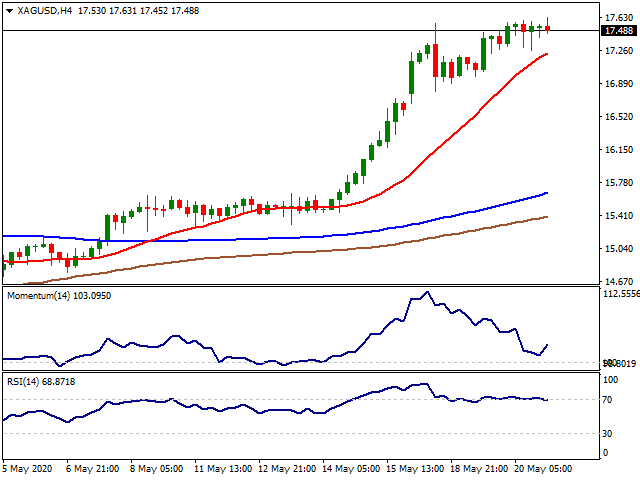 After a short break on Tuesday, WTI extended its bull-run supported by the renewed expectations of the increase in demand and voluntary production cuts by OPEC+. Also, commercial crude oil inventories in the United States decreased by 5 million barrels in the week ending May 15th, the Energy Information Administration (EIA) announced on Wednesday. This reading came in lower than the market expectation for an increase of 1.1 million barrels generated extra support to WTI. 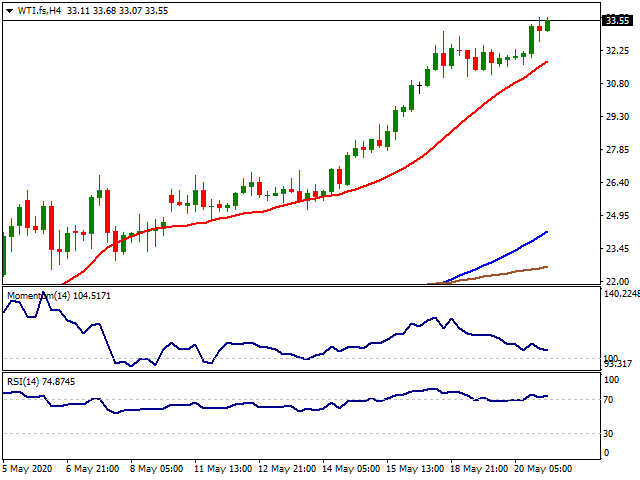 The risk appetite remained intact on the markets during Wednesday trading lifting both energy prices and Wall Street higher. Reflecting the risk-on market atmosphere, the CBOE Volatility Index, Wall Street's fear gauge, was down more than 6% on Wednesday. Markets followed FOMC minutes on Wednesday as the April meeting saw almost no probability of the FOMC implementing negative policy rate. Also, it has been repeated that participants agreed that recent actions taken by the federal reserve were essential in helping reduce downside risks to the economic outlook. Along with the supportive measures stated by FED, also the normalization period started in most of the states supporting the positive mood. 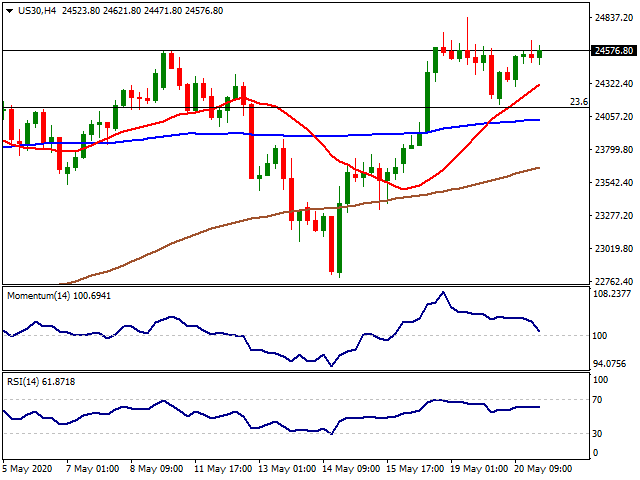