The EUR/USD pair is little changed this Monday, hovering at around the 1.0900 level as the day comes to an end. The financial world kick-started the week in slow motion amid holidays in the US and the UK keeping volumes at lows and the macroeconomic calendar scarce. Germany published the May IFO Survey, which showed that the Business Climate in the country improved from 74.2 to 79.5 on the back of growing expectations. The assessment of the current situation, however, fell from 79.4 to 78.9 as the economy still struggles to return to normal. In the meantime, continued tensions between the US and China continued to dent investors’ sentiment.

The EUR/USD pair is neutral-to-bearish in the short-term, having posted a lower low and a lower high for a third consecutive day. The pair bottomed at 1.0870, where, in the daily chart, it has a mild-bullish 20 SMA. In the 4 hours chart, the daily low converges with directionless 100 and 200 SMA, while the 20 SMA heads south above the current level. Technical indicators, in the meantime, have resumed their declines within negative levels, the RSI lacking enough strength to confirm another leg south yet the Momentum at fresh 2-week lows. 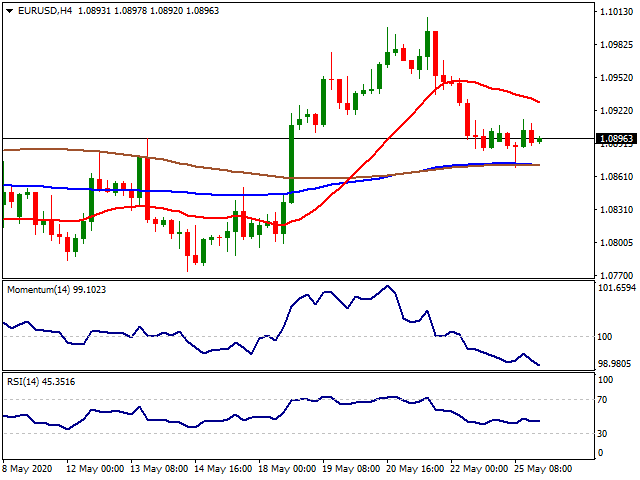 The USD/JPY pair spent most of this first of the week lifeless around the 107.70 level. The pair managed to post a modest intraday advance amid the good performance of Asian equities, although there was no follow-through amid concerns about US-China tensions. At the beginning of the day, Japan released the final version of the March Leading Economic Index, which came in at 84.7, better than the previously estimated 83.8. The Coincident Index for the same month was downwardly revised to 90.2.

On the coronavirus front, Japan has announced it lifted the state of emergency in all the country this Monday.  Given that US markets will remain closed, there’s no data scheduled for release in the country. This Tuesday, Japan will release the April Corporate Service Price Index, seen at 1.9% in April, and the All Industry Activity Index for March, foreseen at 0.0% after printing -0.6% in February.

The USD/JPY pair is heading into the Asian session with a neutral short-term technical stance. The 4-hour chart shows that it spent the day hovering just above a flat 20 SMA, which develops above the larger ones, also directionless. Technical indicators, in the meantime, are stuck around their midlines. The pair could turn bullish on a break above 108.08, the high posted last week, while the risk could turn to the downside on a break below 106.90. 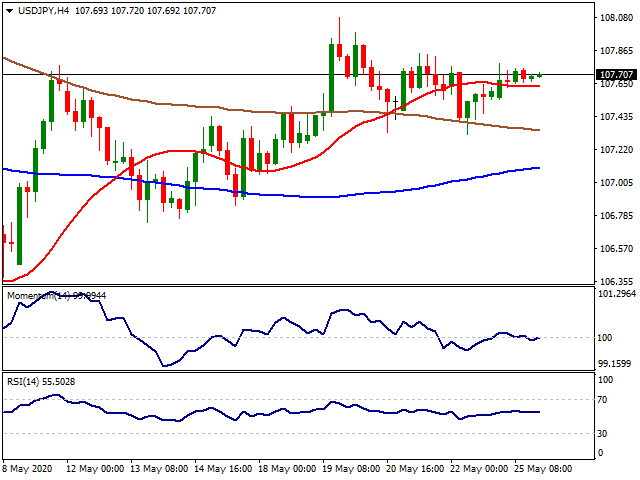 The GBP/USD pair has spent these last few sessions consolidating just below the 1.2200 figure, confined to a 40 pips’ range throughout the day amid holidays in the US and the UK. The pair remained near the three-day low posted last Friday at 1.2161, as investors remained concerned about the possibility of the BOE turning into negative rates to stimulate the economy further.  A political scandal made it to the headlines this Monday, as Boris Johnson's chief adviser Dominic Cummings, as he crossed England driving in the middle of the lockdown, to visit his parents. Anger arose among UK people forced to remain in lockdown by that time.

This Tuesday, the UK will release the CBI Distributive Trades Survey on realized sales, seen at -50% in May from -55% in the previous month.

The GBP/USD pair is trading at around 1.2190, having met short-term selling interest on its attempts to advance beyond the 1.2200 mark. In the 4-hour chart, the pair remains below a bearish 20 SMA, while the 100 SMA gains downward strength well above the shorter one. Technical indicators lack directional strength, but remain well into negative levels, indicating that bears are still in control of the pair. 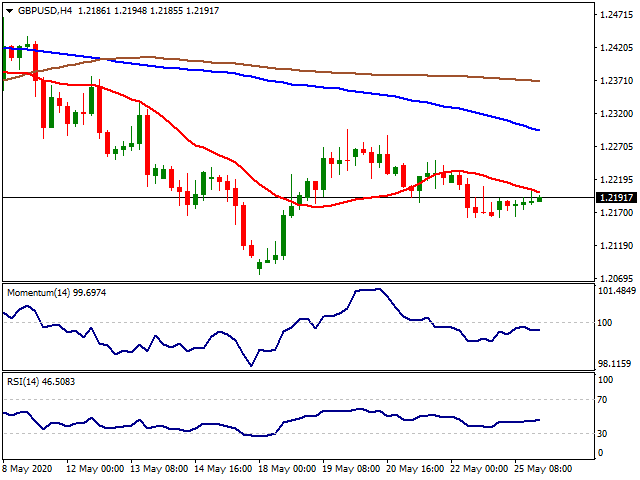 The AUD/USD pair held at the lower end of Friday’s range in thin Monday’s trading, ending the day pretty much unchanged at around 0.6540. The quietness resulting from holidays in the US and the UK was exacerbated by the absence of relevant data coming from other economies, Australia included. Stocks markets in Asia and those in Europe that were open edged higher, underpinning the Aussie. The country won’t release relevant macroeconomic data this Tuesday.

The AUD/USD pair is technically neutral in the short-term, with the bullish potential limited. The 4-hour chart shows that it remains below a flat 20 SMA, although above the larger ones, while the Momentum indicator was unable to recover above its mid-line, resuming its decline. The RSI, in the meantime, remains flat around 52, indicating limited selling interest. The pair would need to advance beyond 0.6615 to become attractive for bulls. 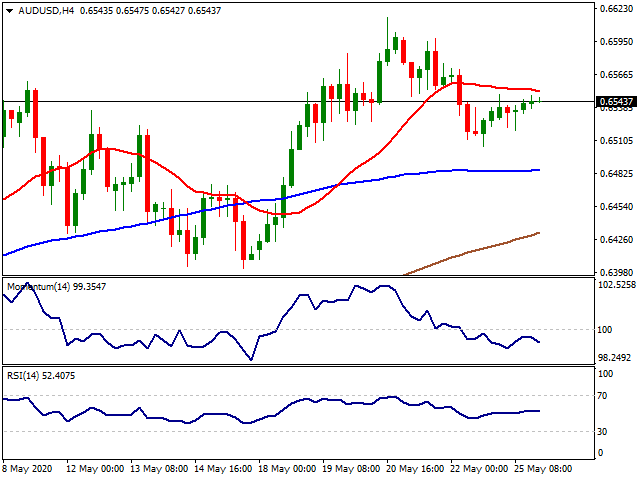 As the markets in the UK and US were closed due to holidays, traders experienced a quiet day without any significant move. While re-opening of the global economies is lifting the risk appetite, escalating tensions between the US and China over the coronavirus pandemic is limiting the equity markets move further and holding Gold against more losses. As the economic activity turns back to normal, the USD might lose its charm due to over liquidity supplied by the central banks. Als the depressed look still persists on the US treasury yields as FED clearly highlighted that they will deliver all the monetary and fiscal measures possible to support the economy. Therefore Gold might be supported even more in the aftermath of the pandemic. 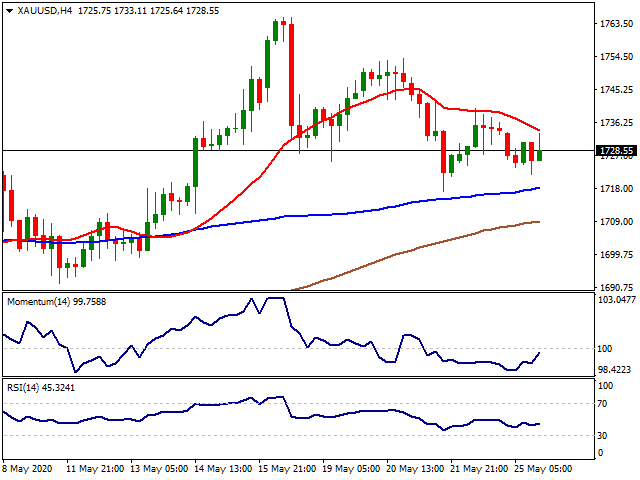 Silver retraced back on Monday alongside Gold but managed to hold its ground over 17.00$ level. Gold to Silver ratio stayed above the 100 level but an attempt to get above 102 was met with increased resistance. As the ratio is elevated compared to pre-crisis levels so in case it continues the recent downside trend, Silver will likely push up in coming days. On the other hand, after breaking its consolidation zone between 14.29$ and 15.54$, the strong rally started to show signs of exhaustion. 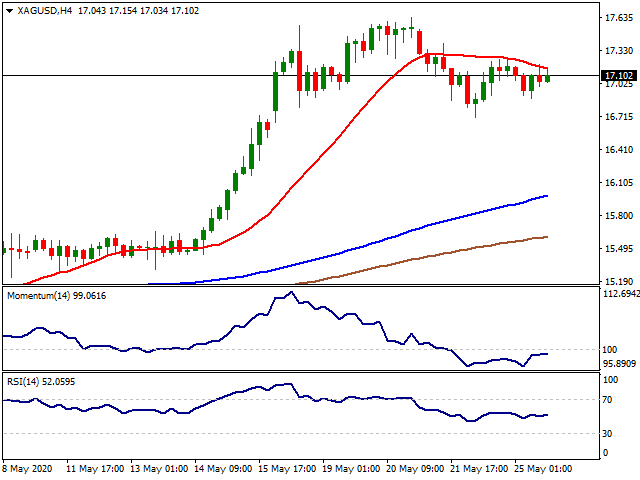 WTI had a limited range trading day on Monday as the markets in the UK and US were closed due to holidays. As the major global economies are planning their re-openings, hopes for an incline in demand for energy is supporting WTI alongside stockpiles are going back to normal levels. Earlier in the day, Russia's state-run news outlet RIA Novosti reported that the Russian energy ministry was expecting the global oil market to reach its balance in June or July. Additionally, the report further noted that Russia was in full compliance of agreed OPEC+ output cuts. Moreover, India's oil and steel minister Dharmendra Pradhan told CNBC TV18 that they were expecting India's fuel demand to reach June 2019 levels next month. 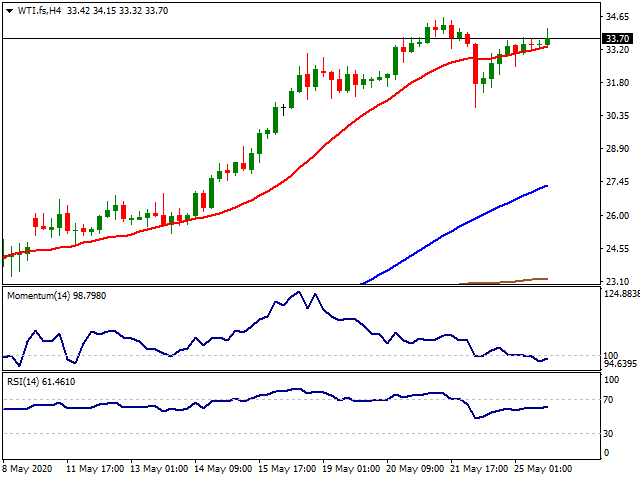 As the markets in the US were closed due to Memorial Day, traders are gearing up for a return to their desks after a long weekend. On the other hand, Dow Jones futures rose %1.2 on Monday signalling a strong opening on Tuesday. Apart from the tensions between the US and China caused by the debate over the origin of the coronavirus pandemic and China’s possible misinformation of WHO, also the US will likely impose sanctions on China if it goes ahead with a draft national security law that would give Beijing more control over Hong Kong. The dispute between the US and China is the main risk event for the equity markets alongside fears of a second wave in coronavirus pandemic. Therefore, despite the positive news about re-opening of the economies and developments about the vaccine, traders are still cautious by keeping a portion of Gold in their portfolios alongside the equity markets in general. 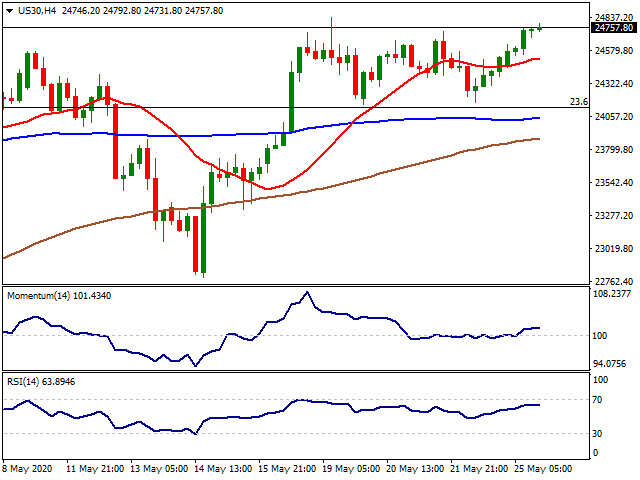