The EUR/USD pair flirted with the 1.1000 level this Tuesday, as risk-appetite took over the financial world. News that a US biotech firm is starting human tests of a new COVID-19 vaccine coupled with economic reopenings boosted hopes of economic recoveries. After a long weekend, stocks returned with a vengeance posting substantial gains throughout the different sessions. Mounting optimism also lifted US Treasury yields, with the yield on the benchmark 10-year Treasury note reaching an intraday high of 0.71%.

Tensions between the US and China persist but were temporarily set aside. Trump’s advisor Kudlow said that the President is not concerned about the trade deal that’s intact for the moment. He added that Trump’s main concerns are more related to China’s responsibility on the coronavirus spread and Hong Kong.

Germany released the June GFK Consumer Confidence Survey, which came in at -18.9 as expected. The US published the Chicago Fed National Activity Index, which came down to -16.74 in April from -4.97 in March. More relevant, the CB Consumer Confidence edged higher to 86.6 in May from 85.7 in April, missing the market’s expectations. The US will release the Richmond Fed Manufacturing Index for May.

The EUR/USD pair holds on to its intraday gains but was once again unable to storm through the 1.1000 figure, somehow indicating that bulls are not fully convinced. In the short-term, and according to the 4-hour chart, chances are skewed to the upside, as the pair continued to advance after breaking above its 20 SMA. The Momentum indicator keeps heading north well into positive ground, while the RSI indicator has lost its strength, but stands around 68. The pair would need to break above last week’s high at 1.1008 to become more attractive for bulls and be able to extend its advance. 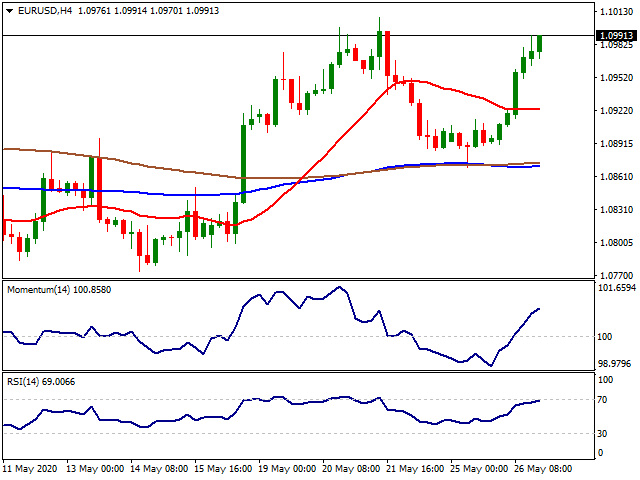 The USD/JPY pair continued to trade in a limited intraday range this Tuesday, finishing the day pretty much unchanged around 107.50. Optimism weighed on the greenback, preventing the pair from advancing despite rallying equities, as Novavax, a US biotech company, announced that it had started human trials of a COVID-19 vaccine. Japanese data, on the other hand, hit the ye, as the Corporate Services Price Index for April resulted in 1.% YoY, worse than the 1.9% expected, while the All Industry Activity Index for March declined by 3.8%, also missing the market’s expectations. The Japanese macroeconomic calendar will remain empty this Wednesday.

The USD/JPY pair has been lifeless for a fifth consecutive day, maintaining its short-term neutral stance. The 4-hour chart shows that the pair is ending the day below a flat 20 SMA, while above the larger ones. Technical indicators, in the meantime, hold directionless around their midlines. The bearish potential seems limited, as the pair would need to break below 106.90 to gain downward traction, while the upside is limited by 108.10. 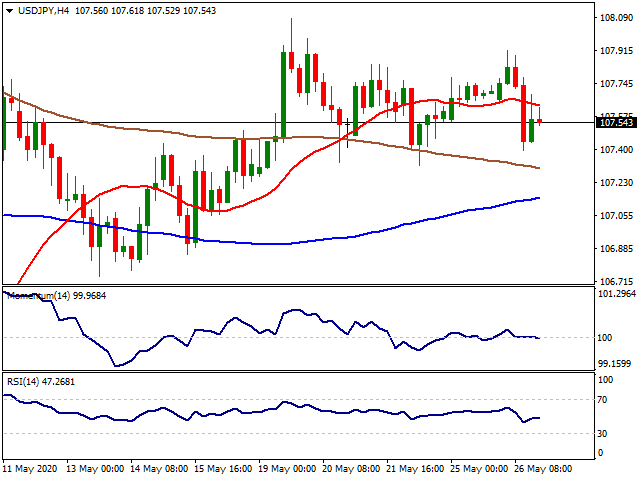 The GBP/USD pair run to 1.2362, its highest in two weeks, as the Pound got boosted by rumours about progress in Brexit talks. According to the latest headlines, the EU is willing to shift its stance on fisheries when talks resume next week, potentially opening the doors for other concessions between both parts. The UK released the CBI Distributive Trades Survey on realized sales, which declined by 50% in May, meeting the market’s expectations. Market’s optimism and rallying equities provided further support to the pair.  The UK calendar has nothing to offer this Wednesday.

The GBP/USD pair retreated just modestly from the mentioned high to settle in the 1.2330 price zone. The 4-hour chart shows that the pair is correcting overbought conditions, although with the risk still skewed to the upside. Technical indicators have lost bullish strength but hold around their daily highs, while the pair is well above a now bullish 20 SMA, while also above the 100 SMA. The 200 SMA, however, capped the upside, providing dynamic resistance at around 1.2370. 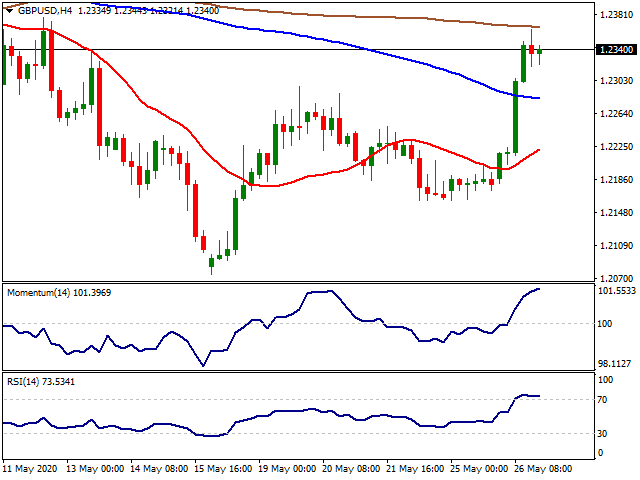 The Aussie was among the most benefited from the upbeat market’s mood, reaching a fresh 2-month high of 0.6671 and heading into the Asian session trading a few pips below such high. The American dollar came under selling pressure as market players turned into riskier assets amid optimism related to economic recoveries. Equities rallied ever since the day started, pushing the pair though the 0.6600 level. Gold edged lower despite dollar’s weakness but held above $1,700.00 a troy ounce.

Australia didn’t publish macroeconomic data so far this week, and this Wednesday will release a minor report, Q1 Construction Work Done, foreseen at -1.5% from -3.0% in the last quarter of 2019.

The AUD/USD pair is approaching March’s high at 0.6684 an immediate resistance level, overbought in the short-term, but with no signs of upward exhaustion. The 4-hour chart shows that technical indicators maintain their upward slopes, with the Momentum at levels not seen since early May and the RSI currently at 77. The pair is above all of its moving averages, with the 20 SMA accelerating north at around 0.6560. Bulls may give up if the pair losses this last support. 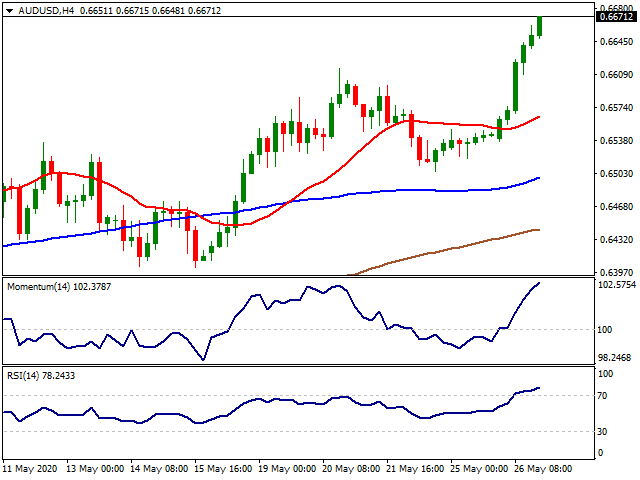 Gold had a free fall on Tuesday as the traders came back from a long weekend. While Wall Street rallied, despite the fall back seen in the USD index DXY, Gold retreated to its lowest level in two weeks. DXY slid below 99.00 level and the benchmark 10-year Treasury note reached an intraday high of 0.71% while the capital flow to Wall Street escalated as the risk appetite emerged. On the other hand, rising tension between the US and China did a little effect on the risk appetite on Tuesday. 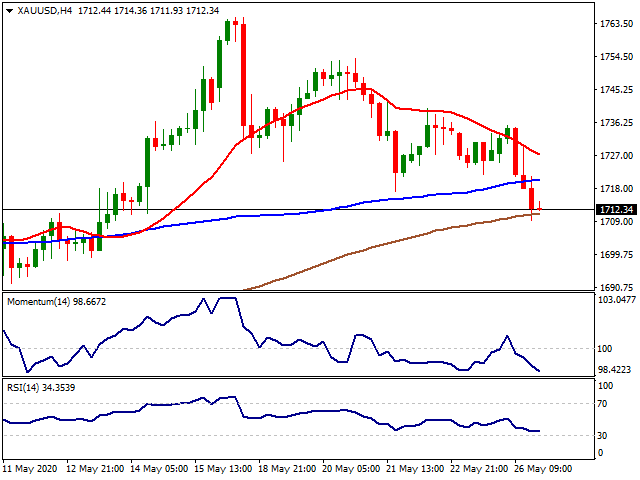 After outperforming Gold last week, Silver trading is capped at critical 17.60$ up to now and on Tuesday, the white metal retraced back to 17.00$ handle with the renewed risk appetite. After the Gold to Silver ratio hit 125 on March as an all-time high, right now the ratio stands around 100 level still indicating more room for Silver to rise compared to Gold as the long term average is around 55 level. On the other hand, any clear indication of normalization in industrial production will most likely trigger a new rally in Silver prices. 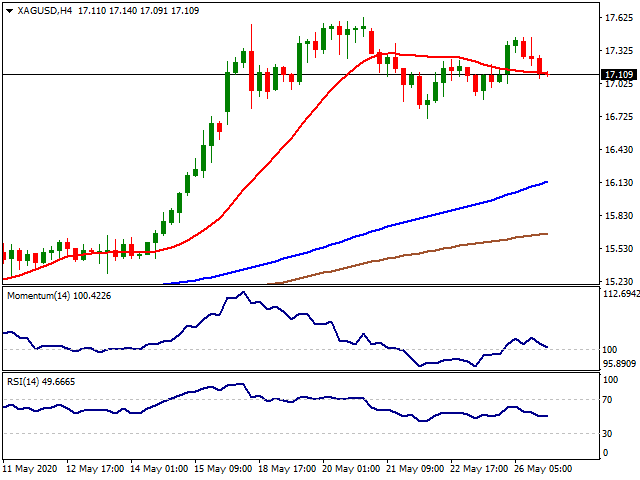 WTI managed to keep its gains on Tuesday after a Reuters report stated that Russian Energy Minister Alexander Novak is expected to discuss a possible extension of existing oil output cuts beyond June with the Russian oil companies. On the other hand, while re-opening of the economies is lifting the oil demand, also the US oil rigs count data continues to print record low data to normalize the stockpile problem seen in April. 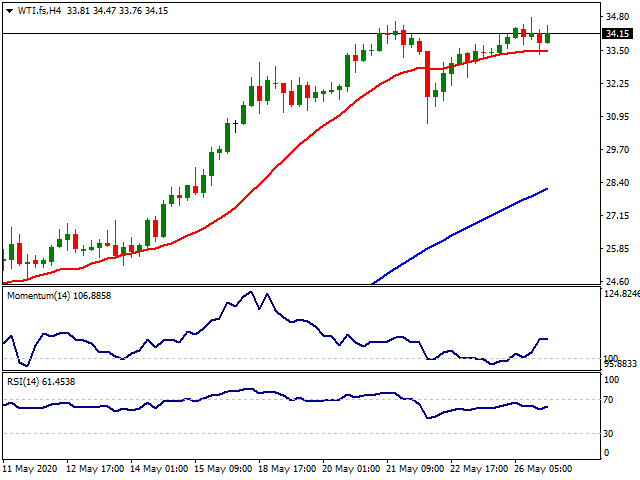 After a long weekend, Dow Jones started the day with a bullish gap lifting the index over 25.000 level. The move is supported by the investor sentiment turned largely positive on news that economies are re-opening and significant progress is being made on a potential coronavirus vaccine. Signs of economic activity such as hotel bookings and airline activity recovering faster than expected created the risk-on sentiment on markets amid the escalating tensions between the US and China. Among the Dow's biggest winners on Tuesday were financial firms Goldman Sachs (GS), JPMorgan (JPM) and American Express (AXP), which gained 8.6%, 7.7% and 6.4%, respectively. While the USD index DXY slid below 99.00 levels, also Gold lost its ground and retraced back through 1.710$ level amid the weakness in the USD. 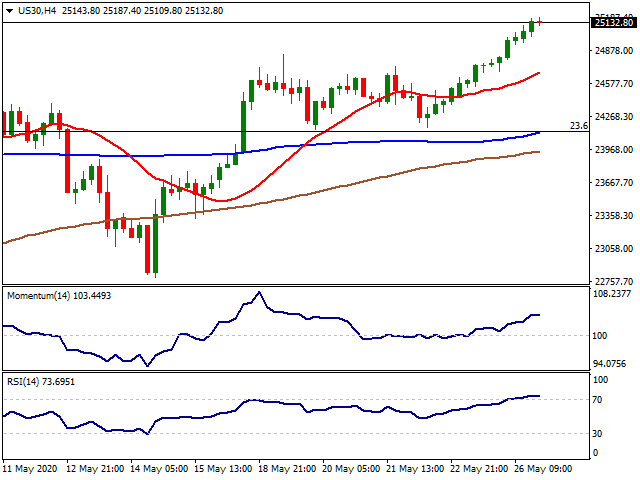