The EUR/USD pair has closed the week with modest losses at 1.1176, as the greenback surged in the last trading session alongside Wall Street’s decline. Profit-taking by London fix coupled with renewed market concerns as several companies reported the close of their US stores amid resurgent coronavirus cases, with the focus in Florida, Texas, and in general, the region known as the Sun Belt. Fears are that the economic downturn will persist for longer, as fresh outbreaks were also reported in Europe.

Data released last Friday failed to impress, with European figures below anticipated. German’s Producer Price Index contracted by 2.2% YoY in May, while the April EU Current Account posted a seasonally adjusted surplus of €14.4 B against the €27.4 B previous. In the US, the Q1 Current Account came in at $-104.2 B. US Federal Reserve Chair Powell offered a speech, repeating that the coronavirus pandemic is behind the high levels of uncertainty. This Monday, the EU will publish the preliminary estimate of June Consumer Confidence, foreseen at -15 from -18.8 in May.

The EUR/USD pair has settled around the 38.2% retracement of its latest daily advance, measured between 1.0774 and 1.1422. In the daily chart, it has broken below a bullish 20 DMA while technical indicators head firmly lower, currently around their midlines. The risk is skewed to the downside, with a clear break of this 1.1170 price zone exacerbating selling interest. In the shorter-term and according to the 4-hour chart, the pair is also poised to extend its decline, as it settled below its 20 and 100 SMA, while technical indicators remain within negative levels, although lacking directional strength. 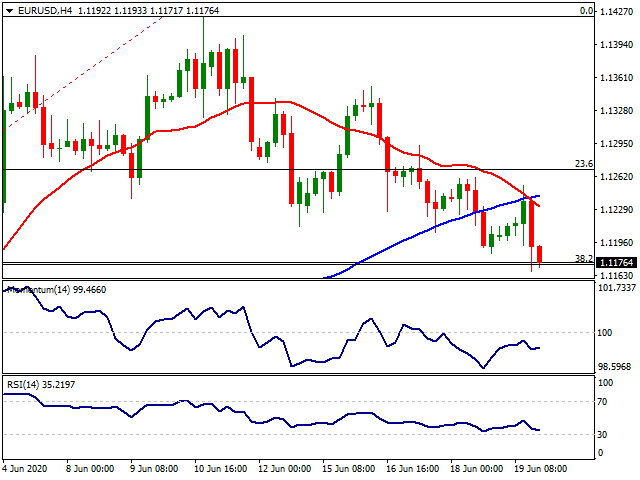 The USD/JPY pair spent Friday consolidating around 106.85, ending the day unchanged and closing a second consecutive week with losses. Equities were up in Asia and Europe, but fell during the American session, providing mixed signals to USD/JPY traders, although fears kept the pair depressed near its monthly low at 106.56. Meanwhile, US Treasury yields were slightly lower at the end of the week, holding within familiar levels.

Japanese data was below expected, as the country published the May National CPI, which came in at 0.1% YoY. The core reading, which excludes fresh food, however, fell to -0.2%, below the -0.1% expected. The country won’t release relevant data this Monday.

The USD/JPY pair is bearish according to the daily chart, as it has continued to develop below all of its moving averages, as technical indicators head modestly lower within negative levels. In the shorter-term, and according to the 4-hour chart, the pair offers a neutral-to-bearish stance, as a bearish 20 SMA caps the upside at around 107.00, while technical indicators lack directional strength but hold within negative levels. 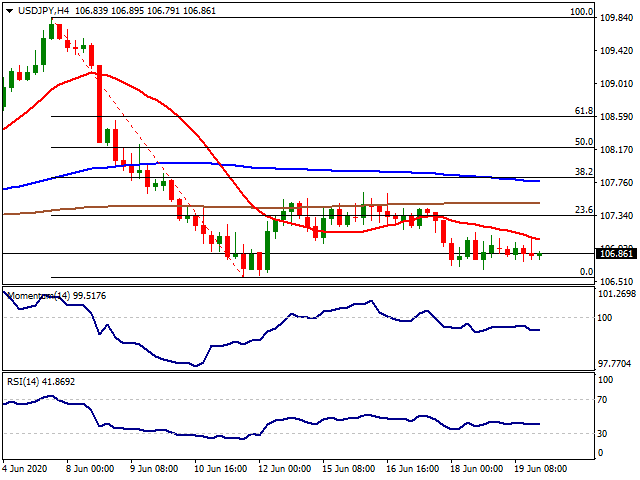 The GBP/USD pair fell for a second consecutive week to settle at 1.2350, a handful of pips above its monthly low at 1.2323. The pair fell as May Retail Sales were better-than-anticipated, although still showing a substantial contraction. According to the official release, sales were up by 12.0 after falling by 18.0% in April, although yearly basis, sales were down by 13.1% after falling by -22.7% in the previous month.

Over the weekend, news indicated that UK Chancellor of the Exchequer Rishi Sunak is mulling an emergency cut to the country’s value-added tax, in an attempt to boost consumption and the country’s recovery. This Monday, the UK will publish the CB Industrial Trends Survey on Orders, foreseen in June at -59 from -62 in the previous month.

The GBP/USD pair has turned bearish, as, in the daily chart, it has extended its slide below all of its moving averages. The 20 and 100 SMA converge around 1.2500, providing a relevant dynamic resistance area. Technical indicators, in the meantime, head firmly south within negative levels. In the shorter-term, and according to the 4-hour chart, the pair has broken below its 200 SMA, which stands directionless around 1.2410 as technical indicators head lower well below their midlines, with the RSI currently at 25, in line with further slides ahead, particularly if it losses the 1.2300 threshold. 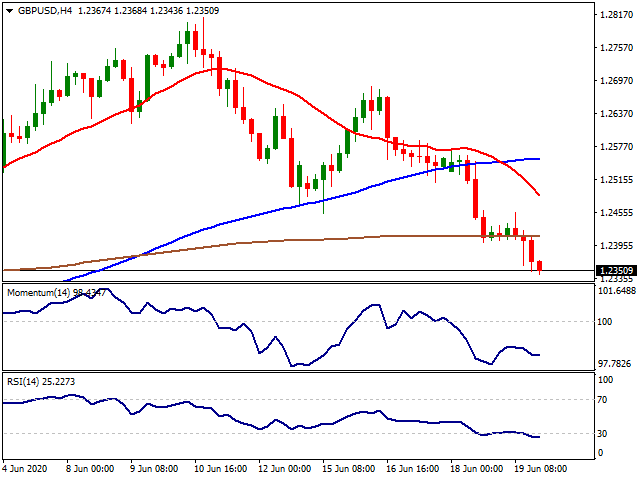 The AUD/USD pair finished the week as it started in the 0.6830 price zone, as the dismal ruling mood limited the bullish potential of the Australian currency. With the country reporting, on average, fifteen coronavirus contagions per day, the RBA is confident that the economic downturn could be shallower than earlier expected. The economic reopening keeps going with no signs of a second wave in the country, underpinning the local currency. Fears about global economic health, however, weighed on equities, which in turn, drag Aussie lower.

Australia released last Friday a preliminary estimate of May Retail Sales, which rose by 16.3%, much better than the previous -17.7%. At the beginning of this week, RBA’s Governor Lowe is due to participate in a panel discussion about COVID-19 and the global economy.

The AUD/USD pair is pressuring a bullish 20 DMA in its daily chart, which maintains its bullish slope above the larger ones. Technical indicators, however, head firmly lower, approaching their midlines from above, and hinting a possible bearish extension ahead. In the shorter-term, and according to the 4-hour chart, the risk is skewed to the downside, as technical indicators head south within negative territory, as the pair broke below its 20 and 100 SMA.  Further slides are to be expected on a break below the 0.6800 figure. 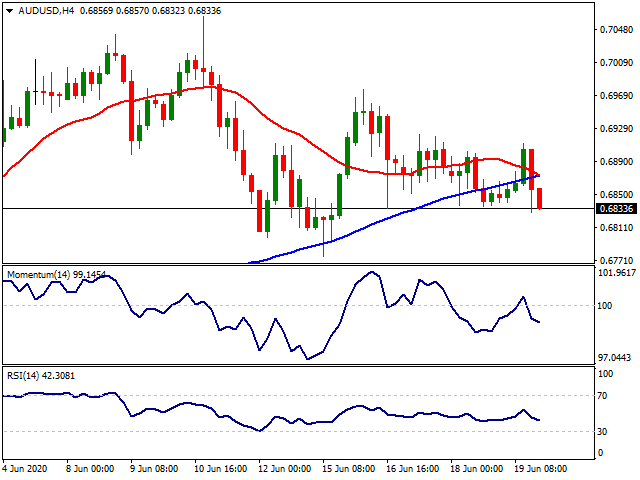 Gold had a robust trading day on Friday amid the positive outlook on the USD index DXY persists. While the traders are willing to price a sharp V-shaped recovery and keep their positions on Wall Street, Gold continues to find demand with the uncertainty regarding the coronavirus pandemic and its aftermaths. Due to a Reuters report, Goldman Sachs raised its Gold price forecast to 2.000$ on Friday as it expects a rally in bullion to continue due to currency debasement fears and economic uncertainty caused by the coronavirus crisis. A weaker dollar will boost the purchasing power of major gold consumers across emerging markets along with easing of lockdowns, the bank added. The risk events will start with the PBoC Interest Rate Decision early on Monday. On Thursday, a series of spending data set and also Gross Domestic Product Annualized(Q1) will be followed by the traders. Also on Friday, consumption data sets will be followed. 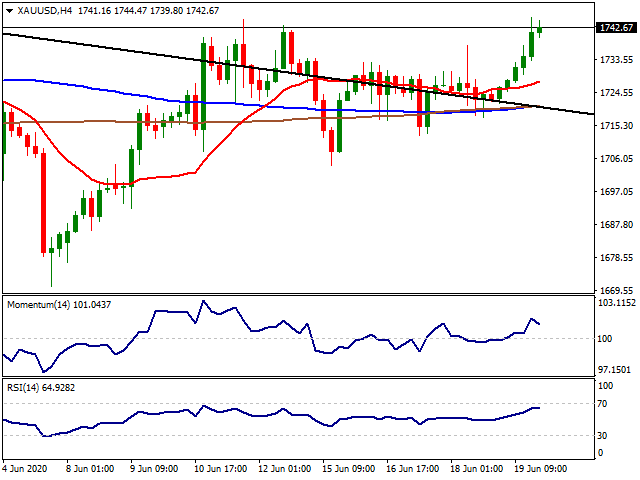 Silver followed the same fashion with Gold on Friday but failed to break its important resistance at 17.60$. Despite the marginal gains made in the USD index DXY, both Silver and Gold managed to pick up the pace. Gold to Silver ratio continues to stay a tick below 100 level while the ratio was below 90 before the pandemic. Therefore, any normalisation in the industrial demand will most likely push Silver prices higher compared to Gold due to Silver’s usage as an industrial component.

WTI tested its 40.00$ resistance again on Friday but failed to break the physiological level. With Friday's advance, the WTIrose nearly 10% for the week and remains on track to post its best weekly close since early March. Following the Joint Ministerial Monitoring Committee (JMMC) meeting on Thursday, OPEC and its allies, a group known as OPEC+, pledged for improved compliance with the agreed output cut and provided a boost to crude oil prices. Fresh hopes of an increase in demand due to normalisation of the economy amid a surging number of cases are supporting WTI at the moment.

Dow Jones retraced back on Friday as the number of cases in coronavirus pandemic continues to increase in the US alongside re-openings. On Friday, Apple stated that it would reclose 11 stores across the U.S. in Florida, North Carolina, South Carolina, and Arizona after the coronavirus case counts racked up. Also, rising new coronavirus cases might force the local governments to pause easing measures. Investors will follow a series of spending data set with Gross Domestic Product Annualized(Q1) in the US. Also on Friday, consumption data sets will be followed. 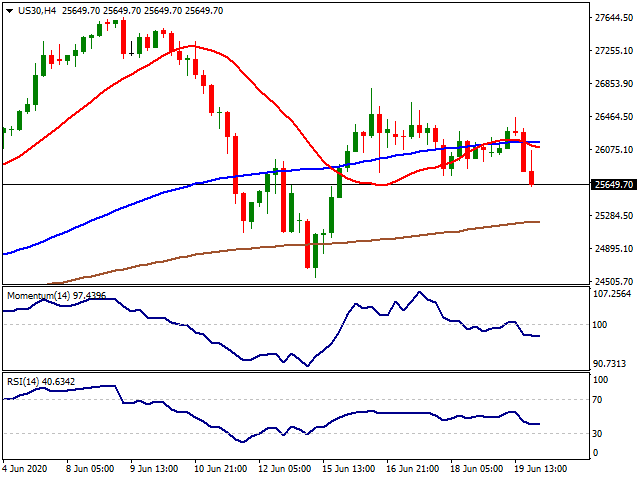