The EUR/USD pair closed a fourth consecutive week with gains in the 1.1420 area, its second-best daily close this year. Hopes for a vaccine boosted high-yielding assets at the beginning of the week, playing against the greenback. The dollar remained under pressure despite the sentiment that took a turn to the worse as the number of new coronavirus cases in the US continued rising to daily records of over 70,000 per day. Meanwhile, outbreaks in European and Asian countries that seemed to have the virus under control further fuel the idea that the economic comeback will take much longer than initially expected.

On Friday, the US published the preliminary estimate of the July Michigan Consumer Sentiment Index, which came in at 73.2, much worse than the 79 expected and falling from 78.1 in the previous month. Also, EU leaders began a meeting that extended into Sunday, to discuss the EU budget and the recovery fund. On Saturday, Council President Charles Michel proposed to shift €50 billion in funding from grants to loans, in an attempt to break the deadlock, although German Chancellor Angela Merkel said that she wasn't sure if they would be able to reach an agreement.

The week will be light in terms of macroeconomic data. This Monday, the EU will publish its May Current Account, while Germany will unveil the June Producer Price Index. The US won’t release macroeconomic figures.

The daily chart for the EUR/USD pair suggests that the pair may continue to advance in the upcoming days, as the pair has settled well above a bullish 20 SMA. The 100 SMA is crossing above the 200 SMA, both far below the shorter one, while technical indicators lack directional momentum, but stabilized well above their midlines. In the 4-hour chart, however, there are some signs that suggest that the pair may retreat, as despite developing above a firmly bearish 20 SMA, technical indicators have turned lower, the Momentum entering negative territory and the RSI currently at 60. 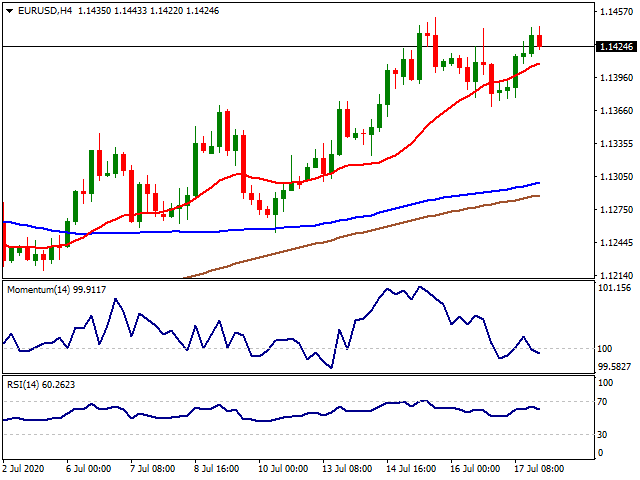 The USD/JPY pair ended the week as it started it, hovering around the 107.00 figure. The pair was confined to an 80 pips’ range but posted a lower low and a lower high for the week, which somehow skews the risk to the downside. Concerns about the ongoing coronavirus crisis are keeping the pair near its recent lows, while rising global equities limit the bearish scope.

Japan didn’t publish macroeconomic data at the end of the week, but US Treasury yields fell with the yield on the benchmark 10-year Treasury note briefly piercing 0.60% to finally settle at 0.62%. At the beginning of the week, the country will publish the minutes of the latest BOJ meeting, and publish the June Merchandise Trade Balance, foreseen at ¥-35.8 B from ¥-833.4 B in the previous month.

Daily technical readings for USD/JPY support a bearish continuation in the upcoming days, as the pair has been unable to recover above its 20 SMA, which stands below the larger ones. Technical indicators, in the meantime, have turned marginally lower within neutral levels. In the 4-hour chart, the risk is also skewed to the downside, as the pair is developing below all of its moving averages, while the RSI indicator consolidates around 45. The Momentum indicator diverges, standing within positive levels, although lacking strength enough to support an upcoming advance. 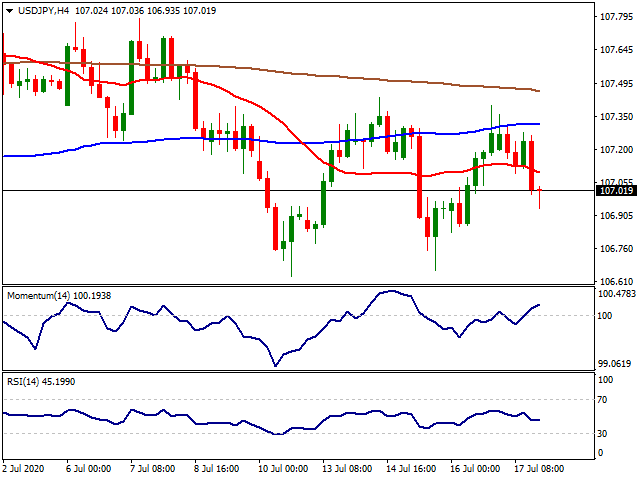 The GBP/USD pair has been trading choppy throughout all the previous week, ending it with modest losses in the 1.2560 price zone. Speculative interest remains away from Sterling amid the lack of progress in Brexit talks and rising prospects of negative interest rates from the BOE. On Friday, Governor Bailey said that the situation in financial markets indicate “interest rates will stay very low,” adding that there’s a legitimate concern about what policymakers can do with QE once things get back to normal.

Meanwhile, the focus shifts to the UK’s economic reopening. On Friday, UK PM Boris Johnson made a statement, highlighting progress made on fighting coronavirus. Johnson referred to how the number of cases continues to decrease, mentioning that the health system is no longer under pressure. Also, he mentioned cases such as Leicester, where a local lockdown was instituted amid “stubborn rates of infection.” Finally, the government set out plans to end what’s left of the lockdown, announcing the return to schools in September, and the return of massive events in October.

The GBP/USD pair is neutral-to-bullish in its daily chart,  with the downside limited by the lack of demand for the greenback. In the mentioned time frame, technical indicators remain within positive levels, with the Momentum advancing. Still, the pair is confined within directionless moving averages. In the short-term, and according to the 4-hour chart, the pair offers a neutral-to-bearish stance, struggling around also directionless moving averages, but with the Momentum indicator accelerating south within negative levels. A clearer bearish path could surge on a break below 1.2480, where the pair bottomed last week. 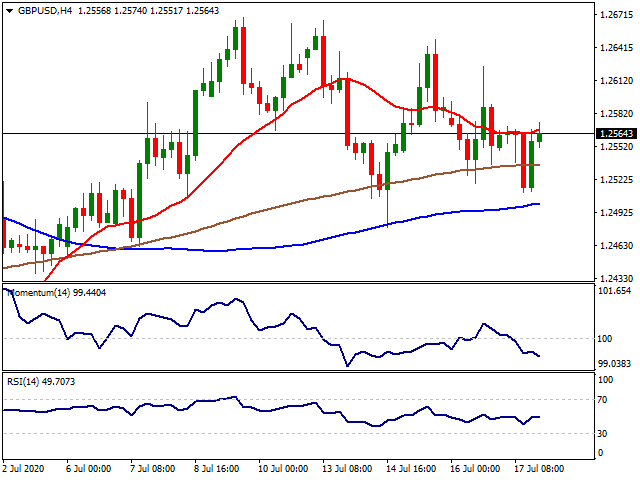 The AUD/USD pair finished another week with gains, although it’s still unable to settle above the 0.7000 threshold. The pair has been comfortably consolidating above the 0.6900 level pretty much since July started, but with the upside limited by the latest coronavirus outbreak in the country, which resulted in the lockdown of the Melbourne area. Just this Sunday, the country informed that Victoria had recorded 363 new cases and three more deaths, which resulted in local authorities to announce the compulsory use of masks and work on social distancing in workplaces, as more than 80% of contagions have occurred. The news could be AUD negative and trigger some action in the absence of macroeconomic data.

The AUD/USD pair holds on to a positive stance in its daily chart, meeting buyers around its 20 SMA, which has turned marginally higher around 0.6930 while holding far above the larger ones. Technical indicators, in the meantime, hold flat within positive levels. In the 4-hour chart, technical readings indicate that there are chances of a downward move, as indicators have turned lower, with the Momentum accelerating south below its midline. The price, in the meantime, pressures a bullish 20 SMA. Below the mentioned 0.6930, the pair has more chances of extending its slide throughout Monday. 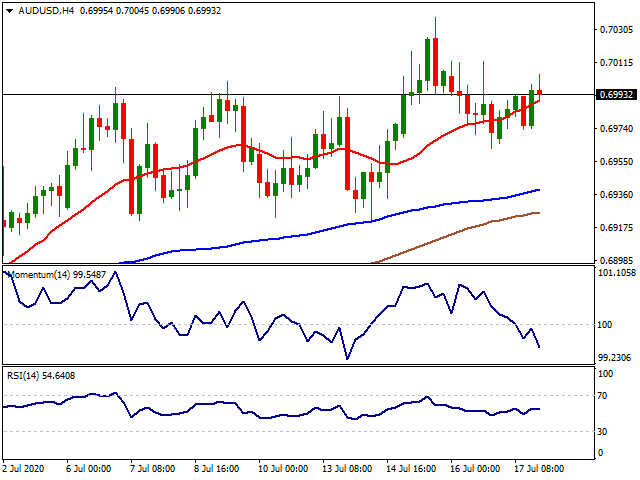 Silver also tried to erase its losses made on Thursday with the support of the decline seen in the USD and risk-off trade in general. As the number of new cases in the US continues to break-up, the uncertainty surrounding new lockdown measures is pushing the risk sentiment down. On the other hand, due to the macro-data readings, the incline seen in the industrial production activity is supporting Silver as its widely used in many sectors. Also, an incline started to be seen in the jewellery market creating extra demand for the physical metal. 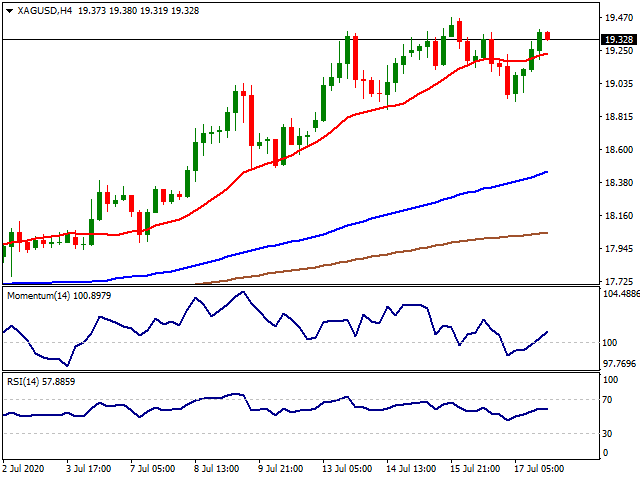 Dow Jones managed to end the week with a move-up but failed to extend its rally as a couple of risk factors dominated the markets. First of all, the number of new cases in the US is far from being under control even forcing some states to re-impose countermeasures. Therefore, while the first wave of the pandemic did not reach a plateau, an expected second wave in Autumn is hovering over the markets as a risk event. Also, as the elections in the US is getting closer, the tensions between the US and China is escalating at a fast pace by announcing restrictions. Despite the gloomy look at the markets, the Q2 earnings season is doing fine for now. 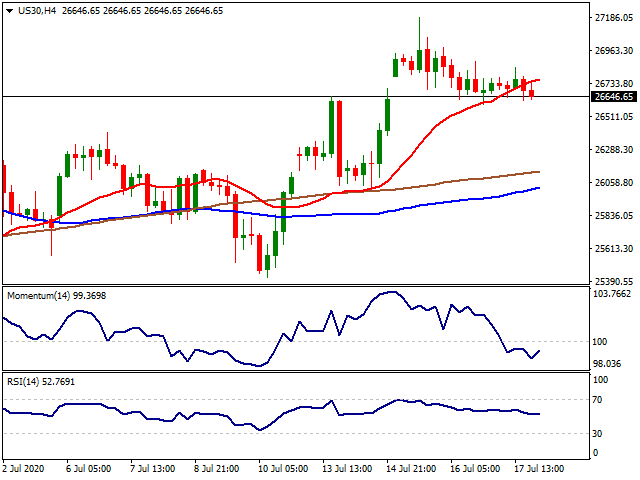 Gold reversed its decline seen on Thursday and managed to end the week over important 1.800$. The current monetary environment and also the risks about the coronavirus pandemic is keeping the demand for the yellow metal alive. On the other hand, as a result of the FED’s policy, the decline seen in the USD is in favour of precious metals in general. While the number of new cases especially in the US might force authorities to re-impose lockdowns, a new set of government stimulus might be on the table to fight with the aftermath of pandemic hit economies problems. Also, at this point, markets are willing to ignore the brewing problems between the US and China in the wake of the elections in the US. Lately, the treasury yields created a counter correlation with Gold as the yields go down, Gold gains traction. Data wise, the week will start with the interest rate decision from the PBoC while in the rest of the week second-tier data sets will be followed. 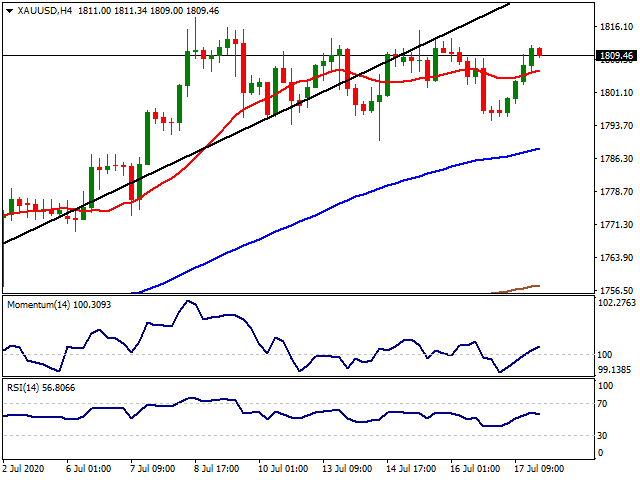 WTI is keeping its un-decisive wait and see mode after hitting important 40.00$ level at the beginning of June. As global economies are getting back to the business at a slow pace, OPEC foresees a strong increase in demand by 2021. On the other hand, OPEC+ decided to impose production cuts from August by 2 million BPD to 7.7 million until December as global economic activity slowly picks up. Despite the incline seen in the economic activity, fear of a second wave in the coronavirus pandemic is suppressing energy prices in general. 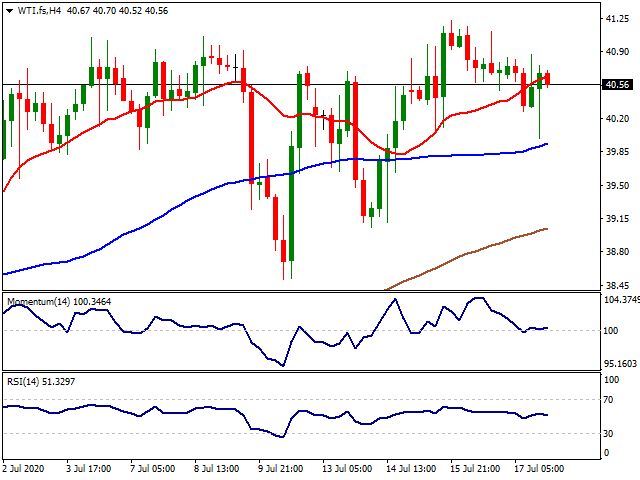 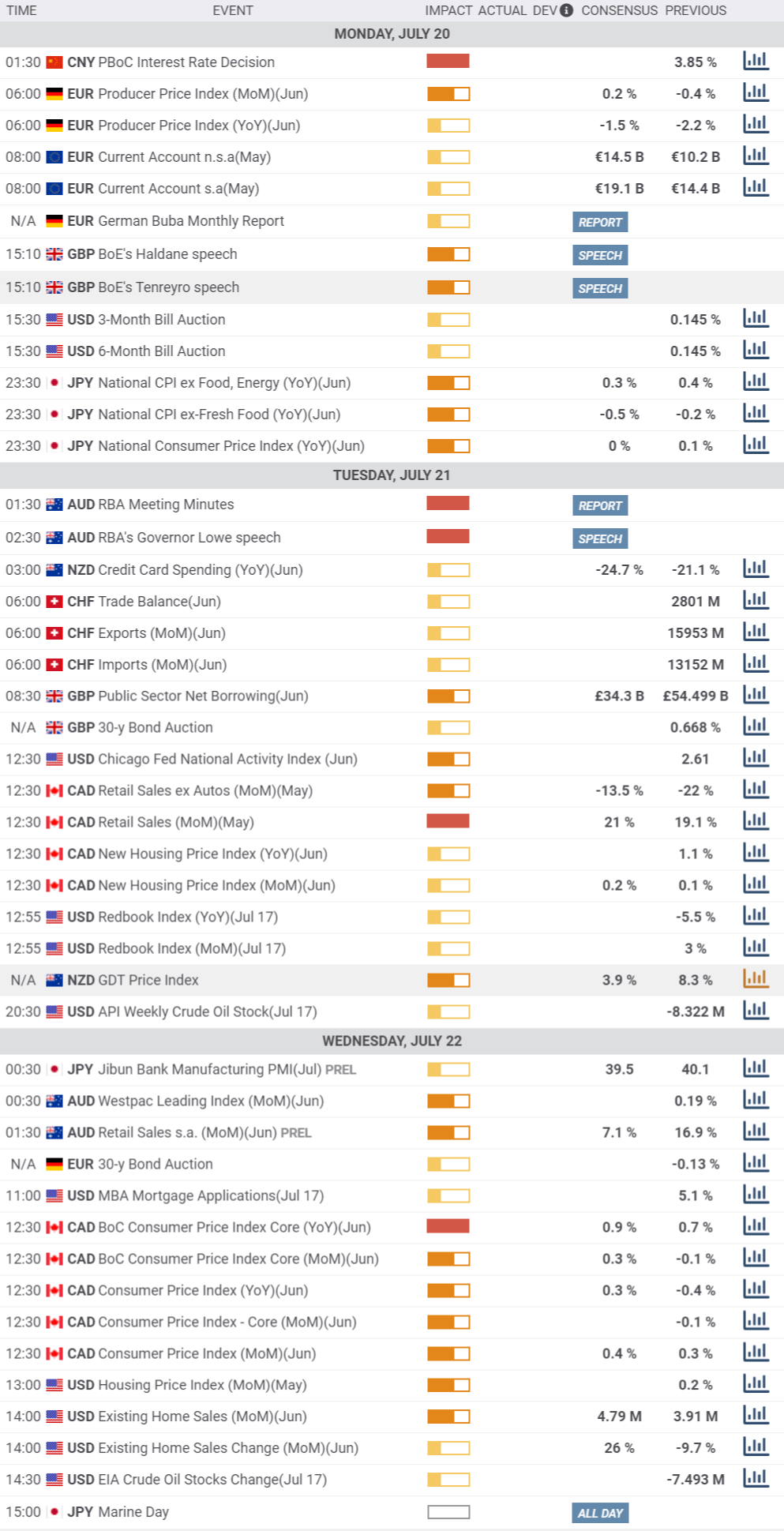