Dollar’s slump extended on Wednesday, helping the EUR/USD pair hit 1.1601, its highest in over a year. The greenback enjoyed some brief demand amid a sour market mood but resumed speculative interest resumed selling it at better levels. Investors put their eyes on US-Sino relations, as the US  State Department ordered China to close the consulate in Houston within 72 hours, while in response, China is considering the closure of the US consulate in Wuhan. Nothing was said about the trade deal between the two economies, although for sure, this is not helping to soften the path towards a final agreement.

ECB’s President Christine Lagarde hit the wires this Wednesday and said that the economic outlook remains uncertain, although clarified that the central bank’s baseline forecasts take into account a second coronavirus wave. She also said that the recovery fund agreed by EU leavers is “reasonable.” The Union didn’t publish relevant macroeconomic data, while US figures passed unnoticed. According to the official release, June Existing Home Sales were up 20.7% in the month, better than the previous -9.7% but missing the market’s expectations.

From a technical point of view, the EUR/USD pair has chances of extending its advance, despite the latest pullback from the mentioned daily high, which held above 1.1545, the immediate support. In the 4-hour chart, technical indicators retreated from extreme readings but remain within overbought levels, while moving averages head firmly higher far below the current level, all of which skews the risk to the upside. The pair has a relevant resistance level at 1.1620, the level to surpass to be able to extend its gains towards the 1.1700 region. 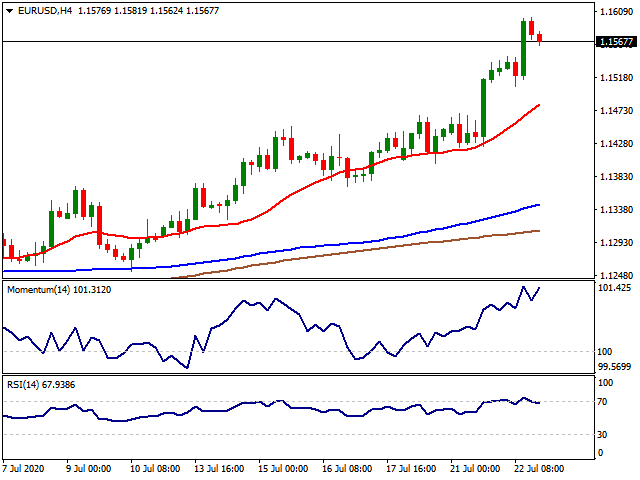 The USD/JPY pair recovered once again from the 106.60 price zone and returned to its comfort zone a few pips above the 107.00 level. The sentiment remained sour throughout the day, fueled by US-China tensions and pandemic-related headlines. Nevertheless, a modest advance in US indexes has helped the pair to recover above 107.00 during US trading hours. US Treasury yields, in the meantime, edged lower with the yield on the benchmark 10-year note down to 0.58%, as concerns about the stubbornly high number of new daily coronavirus cases undermined the market’s mood. Over the last 24 hours, the world reported roughly 240,000 new contagions, with 67,000 of those coming from the US.

Japan published at the beginning of the day the preliminary estimate of the July Jibun Bank Manufacturing PMI, which came in better than anticipated, printing at 42.6 also improving from the previous 40.1. Japan will be on holiday this Thursday, as it celebrates Marine Day.

The USD/JPY pair bounced from the base of its latest range, losing the bearish strength seen on previous updates. The pair is now neutral, according to the 4-hour chart, as technical indicators turned flat after reaching their midlines. In the mentioned time-frame, it has settled above its 20 SMA but remains below the largest one. The bullish potential seems well-limited by the broad dollar’s weakness. 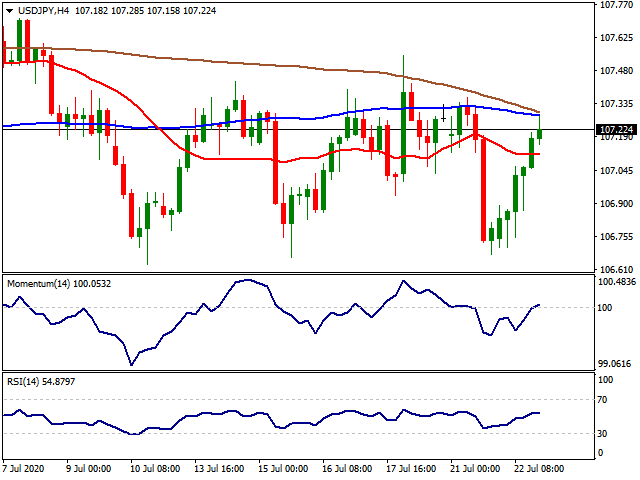 The GBP/USD pair took a dive during European trading hours, falling to 1.2643, but later recovering amid persistent dollar’s weakness. The pair is ending the day little changed in the 1.2740 price zone, despite discouraging headlines coming from the Brexit front. As the latest round of EU-UK talks nears an end, no progress on “significant differences” has been made. The UK government is said to be working on the assumption that there will be no deal by year-end. Instead, the future trade relationship with the EU will likely be in WTO terms. Brexit is not the main concern these days but could take its toll on Pound anytime.

This Wednesday, the UK will unveil the CBI Industrial Trend Survey on Orders for July, foreseen at -38% from -58% in the previous month.

The GBP/USD pair retains its bullish stance according to intraday technical readings and still has room to extend gains to fresh weekly highs. The 4-hour chart shows that the Momentum heads lower within positive levels, indicating decreasing buying interest instead of signaling increased selling pressure. The RSI consolidates just below 70, while a bullish 20 SMA provided intraday support, now at around 1.2660. The main resistance comes at 1.2812, this month high, while the pair would enter a bearish corrective movement on a break below the mentioned 20 SMA. 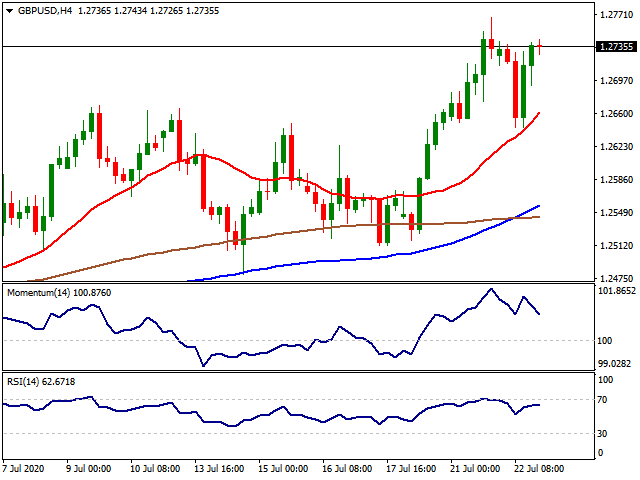 The AUD/USD pair extended its rally to 0.7182, a fresh multi-month high, despite mixed Australian data released at the beginning of the day. The June Westpac Leading Index came in at 0.44%, better than the previous 0.2%, although the preliminary estimate of June Retail Sales came in at 2.4%, missing the market’s expectations of 7.1% and well below the previous 16.9%. The pair eased from the mentioned daily high to end the day unchanged in the 0.7130 price zone, on the back of the poor performance of global equities.

Nevertheless, the decline was limited by persistent dollar’s weakness and soaring gold prices, which reached a fresh multi-year high of $ 1,870.29 a troy ounce. During the upcoming Asian session, Australia will publish the quarterly NAB’s Business Confidence Index, foreseen at -8 from -11 in the previous quarter.

Intraday charts for the AUD/USD pair indicate that it is correcting overbought conditions, but retaining its bullish stance. In the 4-hour chart, it continues to develop far above a firmly bullish 20 SMA, which advances above the larger ones. Technical indicators, in the meantime, ease from extreme levels, but hold into overbought territory. A steeper corrective decline could take place if the pair losses the 0.7100 level, but will turn bearish on a break below 0.6995, quite unlikely for the upcoming sessions. 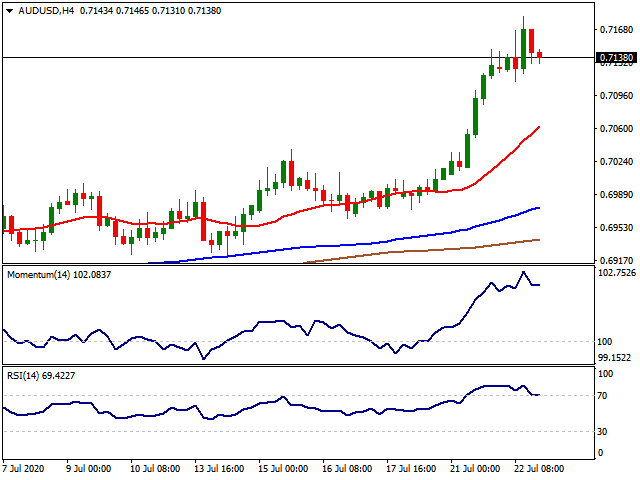 Silver is unstoppable as the white metal continues to outperform Gold in recent days. The impressive rally seen in Silver pushed Gold/Silver ratio to 200-week ma at 82.34 which tested 127.00 in March. As Silver is more an industrial metal compared to Gold, the pandemic hit the white metal hard with the lockdown of the economies which halted the industrial production. Therefore, as the economic activity started to normalise around the globe, Silver is trying to close the gap at a fast pace. On the other hand, the aggressive monetary policy from the major central banks hurting the USD and also the bond yields supporting the rally seen both in Gold and Silver. 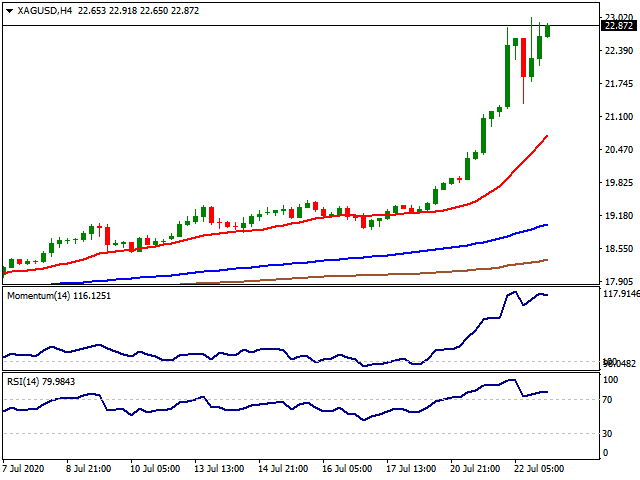 Dow Jones tried to keep its bullish run despite the emerging geopolitical risk events on Wednesday. The US ordered to close Chinese consulate in Houston in three days as the US accused China of stealing the intellectual property. On the other hand, the number of coronavirus cases continues to incline in the US as California now surpassed New York on Wednesday. Apart from these major events, Trump ordered hundreds of federal law enforcement officers sent to Chicago in response to the violent crime wave. The USD index DXY kept its decline testing sub-96.00 levels while Gold and Silver rallied to new multi-year highs. Despite all the risk events, traders are still optimistic for the aftermath of the pandemic pricing a sharp V-shaped recovery. On the other hand, as the elections in the US comes closer, the political uncertainty might create extra pressure on the risk event in the close term. 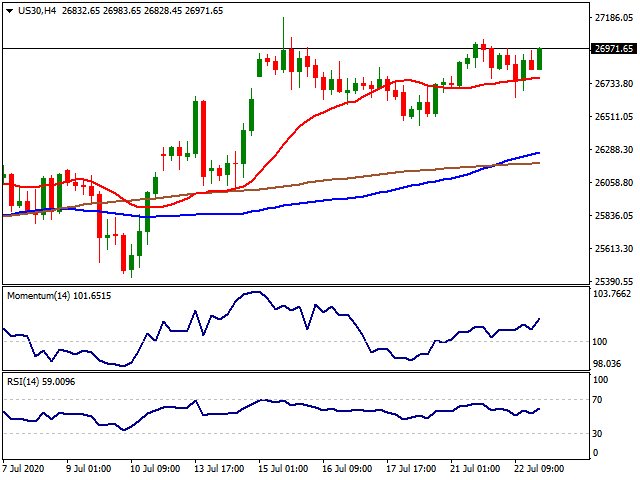 Gold is keeping its impressive rally while the USD index DXY keeps its decline testing sub-96.00 level. While the improvement in market sentiment on COVID-19 vaccine hopes and following the EU recovery fund agreement along with lower US yields is weighing on the greenback. On the other hand, the tensions between the US and China continue to escalate but the markets seem to ignore the political dispute as well as the surge seen in new coronavirus cases in the US. Due to current monetary policy conditions with negative rates and extreme liquidity, every possible retracement in Gold can be considered as a buying opportunity for the long run. 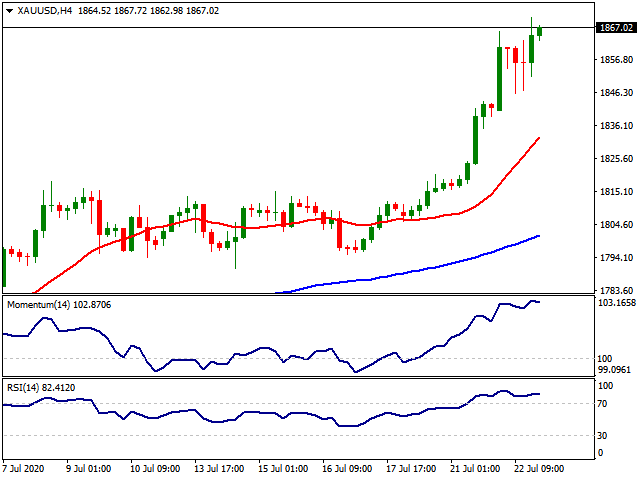 WTI is trying to defend its hard-earned 40.00$ resistance and keeping its bullish move over the 41.00$ level. The US API Weekly Crude Oil Stock for the period ended on July 17 grew 7.544 million barrels versus the previous depletion of 8.322 million barrels. On the other hand, fresh US-China tensions over the closure of Beijing’s consulate in Houston, as the US accused China of stealing the intellectual property (IP), dampened the market mood and limited the advance seen in WTI. Also, the incline seen in new coronavirus cases continues to disturb the risk appetite in the markets as cases in California now surpassed New York. 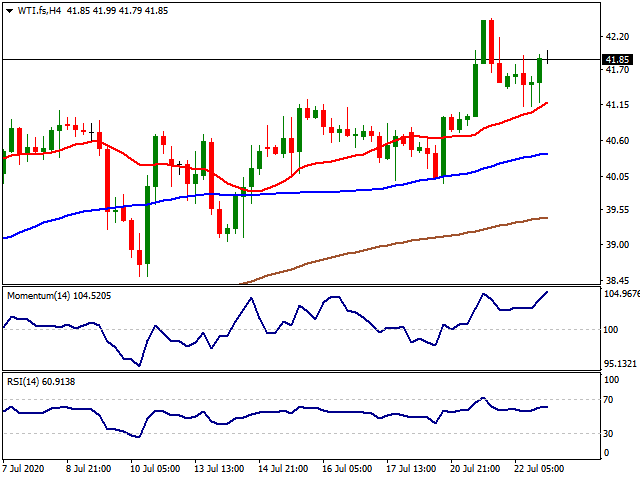