The greenback advanced against all of its major rivals, sending EUR/USD down to 1.1740 ahead of the US opening. The pair tried to recover from the mentioned low, but an intraday bounce was rejected by sellers aligned ahead of 1.1800, resulting in EUR/USD ending the day in the red near the mentioned low. The dollar’s advance is an extension of Friday’s gains, fueled by the latest US President Trump’s executive orders on fiscal ail. Speculative interest chose to ignore mounting tensions between the US and China, as Beijing announced sanctions on 11 Americans, most of them are Congressmen and none part of Trump’s administration and threatened with retaliation over the forced selling of the TikTok app.

The macroeconomic calendar had little to offer this Monday.  The EU published the August Sentix Investor Confidence, which resulted at -13.4, beating the expected -15.2 and improving from the previous -18.2, while the US unveiled the June JOLTS Job Openings, which beat expectations, rising by 5.889M. This Tuesday, the focus will be on the August German ZEW Survey on Economic Sentiment, seen improving in Germany and the EU when compared to the previous month. The US will publish August PPI data.

The EUR/USD pair is trading around 1.1740 as the US session comes to an end, retaining its bearish short-term stance, despite holding near the 23.6% retracement of its July/August advance. The 4-hour chart shows that the 20 SMA turned lower above the current level, while the larger ones keep heading north below the current price. Technical indicators, in the meantime, have resumed their declines within negative levels, after a modest corrective advance, maintaining the risk skewed to the downside. 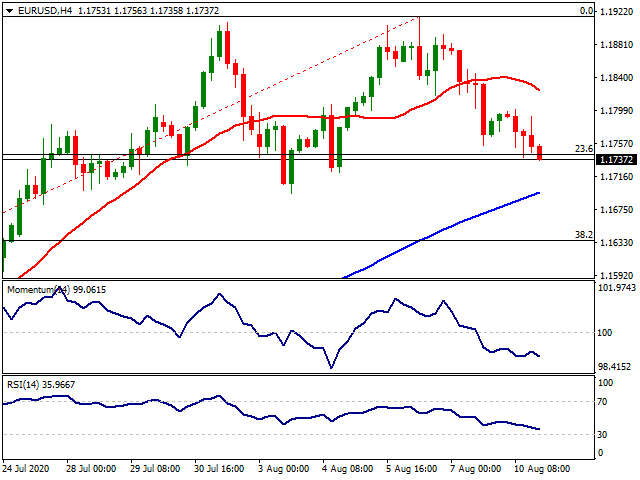 The USD/JPY pair peaked at 106.20, a four-day high on the back of resurgent dollar’s demand. However, the pair was unable to hold on to gains ending the day little changed in the 105.90 price zone. The American currency rallied at the beginning of the day amid enthusiasm about US President Trump executive orders on fiscal aid, but the momentum faded as the day went by. European indexes closed in the green, but Wall Street traded unevenly, with the DJIA posting substantial gains but the Nasdaq unable to trade in the green.

US Treasury yields, however, advanced, with the yield on the benchmark 10-year note settling at 0.57%, despite cautious investors amid tensions between Washington and Beijing. Japan will open its weekly macroeconomic calendar this Tuesday, publishing the June Trade Balance, the preliminary estimate of July Machine Tool Orders, and the latest Eco Watchers Survey.

The USD/JPY pair met sellers around a bearish 20 DMA, a sign that the market is not ready to go up. In the shorter-term, and according to the 4-hour chart, the pair is neutral, trading between the 100 SMA capping the upside and the 20 SMA providing support. Technical indicators, in the meantime, hold just above their midlines, but lack strength enough to confirm another leg higher. The upside will look clearer on a break above 106.25, while bears could gain control on a break below 105.70, the daily low. 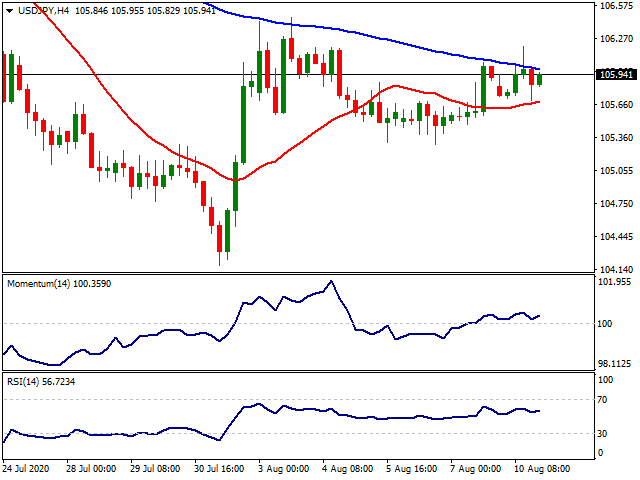 The GBP/USD has been resilient to dollar’s demand, trading as high as 1.3103 to close the day with gains around 1.3080. The Pound gained despite resurgent coronavirus cases in the UK, as the kingdom reported this Monday 816 new contagions. UK PM Boris Johnson said that the government wouldn’t hesitate to reimpose lockdown measures if needed. It’s spokesman later announced that they will set out at the end of the week whether to go ahead with reopenings, adding that they pretend to act timely “on quarantine if data shows we need to.”

Meanwhile, the Brexit transition period continues, with just five months ahead and no trade deal between the UK and the EU. Both parts have red lines that are unwilling to cross to reach common ground. So far, the market is paying no attention to the matter, but as the date approaches, it will become more relevant and most likely a negative factor.

This Tuesday, the UK will publish its latest employment figures. The ILO unemployment rate for the three months to June is foreseen rising from 3.9% to 4.2%, while the July Claimant Count Change is expected to show an increase of 10K.

The GBP/USD pair offers a neutral-to-bearish stance, as, despite the intraday advance, it held closer to its recent lows. The 4-hour chart shows that the upside was capped by a mildly bearish 20 SMA, while technical indicators are heading marginally lower just below their midlines. The larger moving averages, however, keep heading higher well below the current level, with the 100 SMA providing dynamic support at around 1.2915. The bearish case would be firmer on a break below 1.2980, the low set last week. 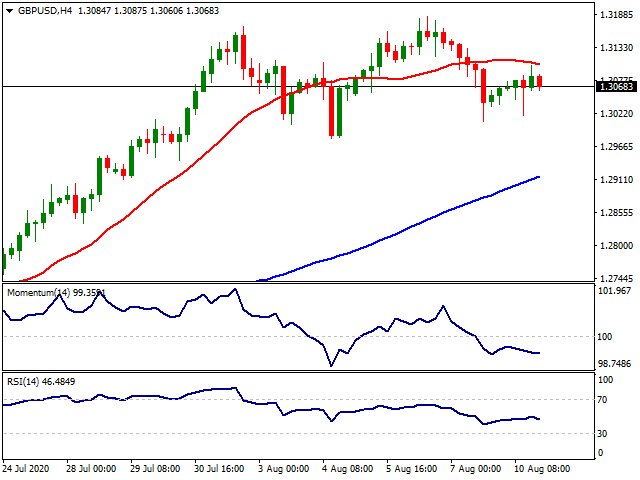 The AUD/USD pair saw little action this Monday, ending the day as it started around the 0.7150 price zone. Intraday dollar’s advance pushed the pair down to 0.7139, while the daily high was established at 0.7183. Capping advances, oil prices edged lower on dollar’s renewed strength, with the bright metal nearing $2,020 a troy ounce. Australia didn’t publish relevant macroeconomic data on Monday, but during the upcoming Asian session, the country will unveil the NAB’s Business Confidence Index for July, previously at 1, and the NAB’s Business Conditions Index for the same period.

The AUD/USD pair is trading near its daily low and bearish according to intraday technical readings. The 4-hour chart shows that it remained below a bearish 20 SMA, and barely holding above a bullish 100 SMA, this last providing dynamic support around the mentioned daily low. Technical indicators remain within negative levels and gaining strength downwards, further supporting an upcoming leg lower. A strong static support level comes at 0.7070, and a break below this last seems unlikely at the time being. 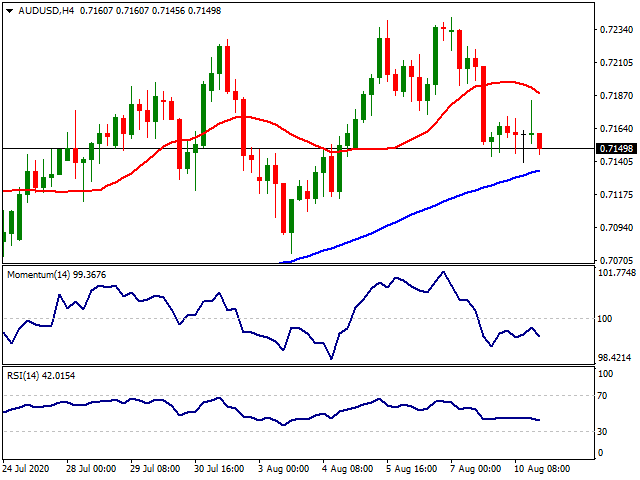 Gold is keeping its technical correction as the USD index DXY advances through mid-93.00 levels after hitting last two year’s lows. Also, the US yields had a mixed look while the 10-year yield advanced a tick. According to the latest commitment of the trader's report (COT) released for the date ending August 4, 2020, hedge funds added to both long and short positions in futures and options. Trump is still escalating the tensions with China as he signed two executive orders banning two popular Chinese apps. On the other hand, due to monetary policy in the US, a short-term inflation shock might be on the table as the liquidity is extremely high. Gold can be a good hedge instrument against the inflation risk therefore the demand will most likely to prevail in the coming terms. 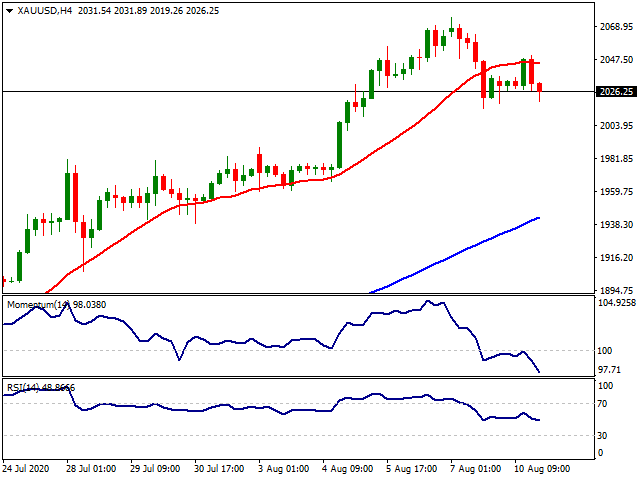 Silver outperformed Gold on Monday testing over 29.00$ level before retracing to mid-28.00 levels. A strong sign of normalisation in industrial production is fueling the Silver demand, therefore prices compared to Gold. It was a matter of time for Silver to catch-up with Gold as the Gold to Silver ratio hit extremes in March. While the cost of Silver is lower to invest and more portions can be bought, the white metal is highly volatile and depends on the real economy to advance in crisis times. 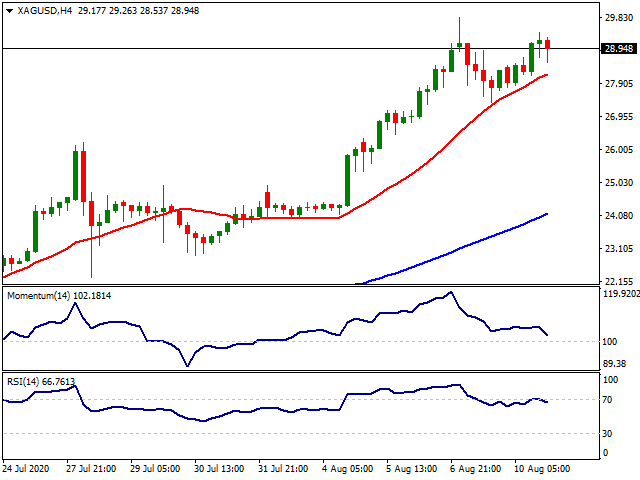 WTI is keeping its sidelined trade at 42.00$ level while an attempt to upside short lived last week. As better data sets keep coming from China, oil is failing to capitalise the readings due to fears of a second wave in the coronavirus pandemic. On the other hand, the EIA reported a larger-than-expected drop in US crude oil supplies while Baker Hughes’ US oil rig count went down by 4 during last week, taking the US total active rigs to 176. 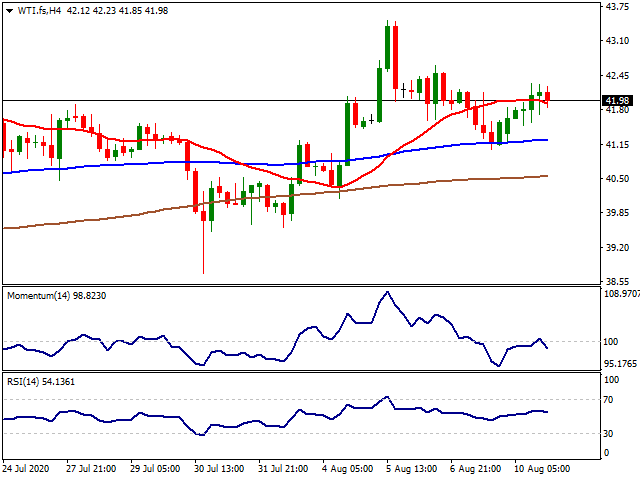 Dow Jones spent the whole of August with an impressive rally ending each trading day with gains. JOLTS Job Openings(Jun) in the US had a strong reading with 5.88 million indicating the robust improvement in the labour market. China’s decision to respond to US sanctioning of officials, plus the arrest of notable figures, proved that Beijing has no intention of backing down, raising the prospect of an extended fallout between the two countries. On the other hand, as fall is getting closer, the coronavirus pandemic is far from being under control in the US. President Trump issued four executive orders (EO) on Saturday as a response to the stalemate in Phase 4 negotiations on Capitol Hill which targets payroll taxes, UE insurances, evictions and student loans. Also, Trump overrides Congress by announcing 400$ per week payment which will be implemented from August 1st. 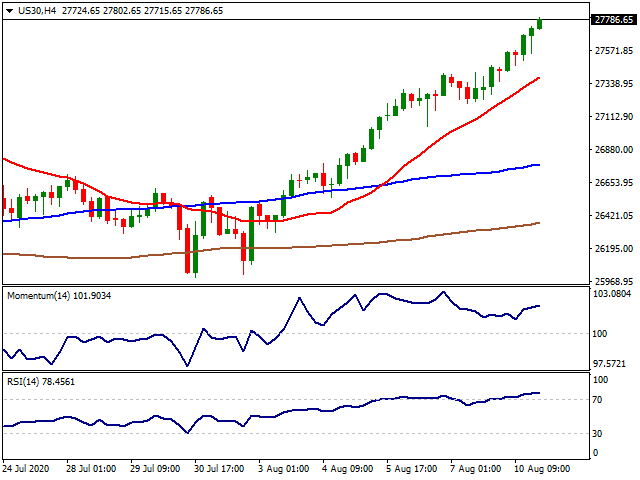