The EUR/USD pair finished a seventh consecutive week with gains in the 1.1840 price zone, advancing on Friday on the back of persistent dollar’s weakness and mixed US data. The greenback has been on the backfoot amid mounting tensions with China and the lack of progress among Congressmen over a stimulus package. In fact, the Congress has left for a month-long recess on Thursday, which only escalates concerns about the US economy. As for tensions with China, news on Friday indicated that a review of the trade deal that was supposed to take place over the weekend had been postponed without any new date scheduled.

By the end of the week, the EU reported the second estimate of Q2 GDP, which matched the preliminary estimate at -12.1%, while in the same three months to June, the EU Employment Change dropped 2.8%, worse than anticipated. In the US, the headline reading of July Retail Sales missed expectations, as sales were up by 1.2% in the month vs the 1.9% expected. Sales ex-autos, however, improved to 1.9%, while Retail Sales Control Group surged 1.4%, beating the expected 0.8%. Finally, the preliminary estimate of the Michigan Consumer Sentiment Index for August resulted at 72.8 from 72.5 in July.  The news helped in keeping equities afloat, which in turn put a cap to the dollar’s gains. The macroeconomic calendar will be quite light for these economies on Monday.

The daily chart of the EUR/USD pair shows that it has held above the 23.6% retracement of its July/August rally at 1.1740, also above a firmly bullish 20 DMA, which converges with the mentioned Fibonacci level. The Momentum indicator, however, heads firmly lower within positive levels, nearing its 100 line. The RSI has retreated from its recent highs and is stable at around 67, suggesting the pair may soon face a corrective decline. In the shorter-term, the 4-hour chart indicates decreasing buying interest but is far from suggesting an upcoming decline. The pair is holding above bullish moving averages, but technical indicators turned south within positive levels. 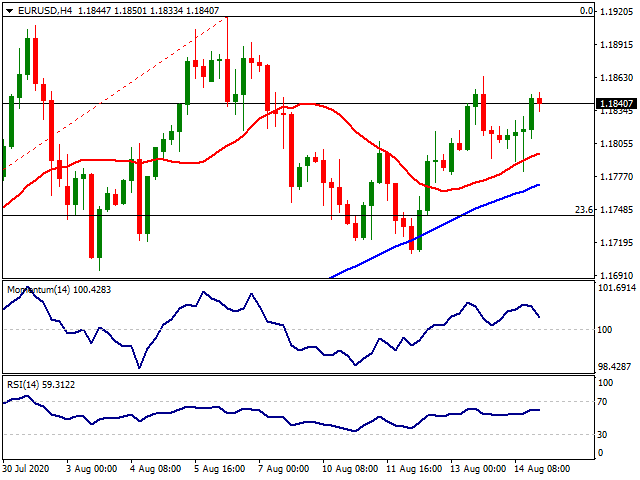 The USD/JPY pair advanced these days, despite the broad dollar’s weakness, amid a substantial recovery in US Treasury yields. The pair surged to 107.04 mid-week, its highest since this August, to settle around 106.60. The pair fell in the last trading day of the week after it failed to take the 107.00 area for a third consecutive day. Equities traded with a soft tone, with Wall Street ending mixed yet little changed on a daily basis. As per Treasury yields, they remained flat amid mixed US economic data.

The JPY was also underpinned by Japanese data, as the Tertiary Industry Index recovered to 7.9% in June from -2.9% in the previous month. During the upcoming Asian session, the country will publish the preliminary estimate of Q2 GDP, with the economy seen contracting a record 27.2% in the three months to June, down from -2.2% in Q1. The country will also publish June Industrial Production, previously at -17.7% YoY and Capacity Utilization, previously at -11.6% MoM.

The daily chart for the USD/JPY pair shows that its weekly rally stalled a few pips below a directionless 100 DMA, but it has spent most of it above a bearish 20 DMA. The Momentum indicator in the mentioned time-frame advanced within positive levels, maintaining its bullish slope, while the RSI is also above its midline, but has already turned south. In the 4-hour chart, the pair broke below its 20 and 200 SMA, while technical indicators crossed their midlines into negative levels before turning flat. The risk of a bearish extension will likely increase on a break below 106.35, the 23.6% retracement of the latest daily advance. 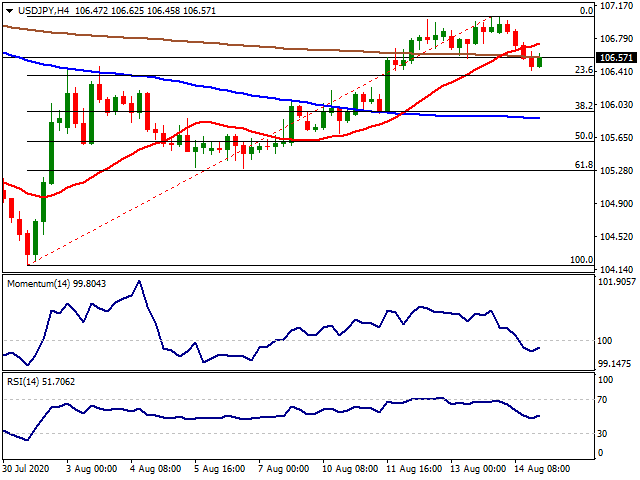 The GBP/USD pair has closed a second consecutive week little changed in the 1.3080 price zone, unable to attract speculative interest. A depressed dollar was not enough to push the pair higher, as concerns about the UK’s future trade relationship with the EU limited Sterling’s demand. Furthermore, negotiations between the UK and Japan came to a halt this week, as the UK pretends to have better trade conditions than those it had as part of the EU. Another factor weighing on the UK currency was the terrible consequence of the coronavirus-related lockdown, as the local economy contracted a record 20.4% in the second quarter of the year.

The government is struggling with its reopening schedule, with PM Johnson pledging for schools to return next month. Meanwhile, the UK has moved on with easing restrictive measures on Saturday, allowing some indoor activity, including wedding receptions for up to 30 guests. However, the kingdom has reported over 1,000 new daily cases for five days in-a-row on Sunday. Uncertainty surrounding the upcoming developments help in keeping investors away from Sterling. This Monday, the UK will publish the August Rightmove House Price Index, which usually passes unnoticed.

The GBP/USD pair has settled below 1.3100 for a third consecutive week, despite multiple attempts to recover the level. The daily chart indicates a neutral-to-bullish bias, as the pair is developing above a bullish 20 DMA, which advances above the larger ones, currently around 1.2970. Technical indicators are holding within positive levels, although with uneven strength, as the RSI advances near overbought readings while the Momentum eases towards its midline. In the 4-hour chart, the price is a few pis above a mild-bearish 20 SMA, as technical indicators ease within positive levels, skewing the risk to the downside without confirming it. A critical support level is 1.2980, with a break below it opening the doors for a steeper decline. 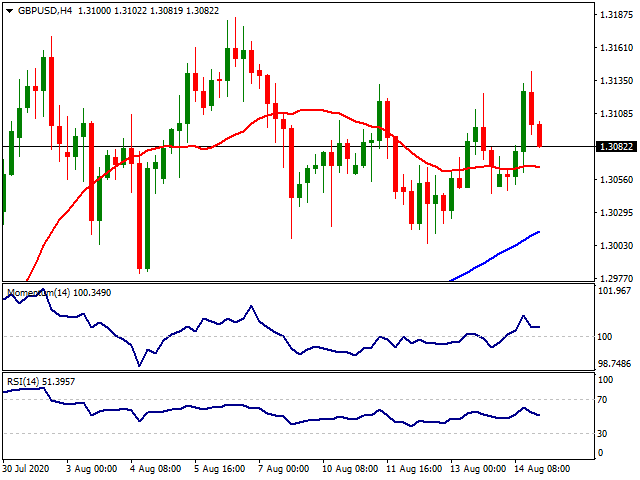 The AUD/USD pair closed the week pretty much unchanged at 0.7170, holding on near its year high of 0.7242. The Australian currency was unable to take advantage of its rival’s weakness, amid poor Chinese data released by the end of the week, and a continued increase in local coronavirus cases. China published last Friday its July Industrial Production, which came in at 4.8% below the 5.1% expected. Retail Sales in the same period contracted 1.1% against a 0.1% advance expected. Meanwhile, equities had been unable to make relevant directional moves, while gold prices plunged these days, both putting another cap to the Aussie.

Meanwhile, the latest coronavirus-related data shows that the number of daily cases picked up in the country, although most new infections continue to take place in Victoria. This Monday, Australia will publish the July HIA New Home Sales report, previously at 0.9%.

The daily chart for the AUD/USD pair shows that it holds a few pips above a mildly bullish 20 DMA, while the 100 DMA is crossing above the 200 DMA far below the shorter one. Technical indicators have stabilized, the Momentum within neutral levels and the RSI at 59. The bullish potential receded, but there are no signs of a bearish movement ahead. In the shorter-term, and according to the 4-hour chart, the pair is above converging 20 and 100 SMA, while technical indicators are easing within positive levels, in-line with the longer-term perspective. 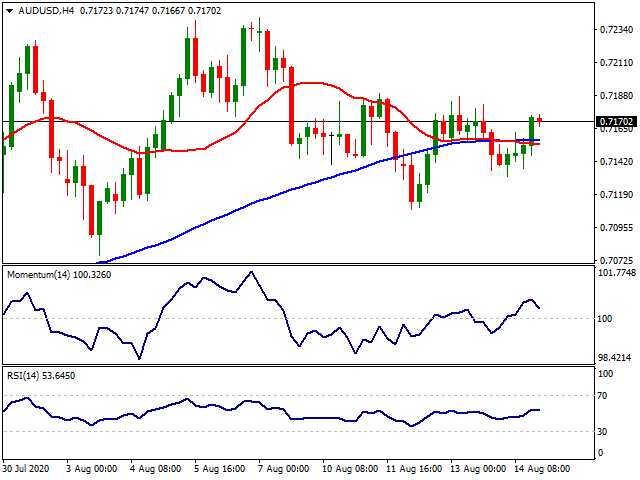 After last week’s sharp technical correction, Gold failed to sustain its recovery to 1.950$ level. The USD index DXY is stabilised over 93.00 level, and mixed US retail sales data created an uncertainty pushing Wall Street below. Retail sales rose 1.2% in July, missing the 1.9% forecast from the Reuters survey of economists signalling weak recovery. On the other hand, the ongoing optimism over the coronavirus vaccine is limiting the advance in Gold. In general, a healthy uptrend needs a pullback from time to time. Therefore, the strong tendency for Gold will be most likely to sustain unless there will be a significant development regarding the cure for the pandemic.

The highlight of the week will be the FOMC minutes that will be released on Wednesday. Also, after Thursday’s initial jobless claims data, markets will follow the preliminary PMI data set from the US. 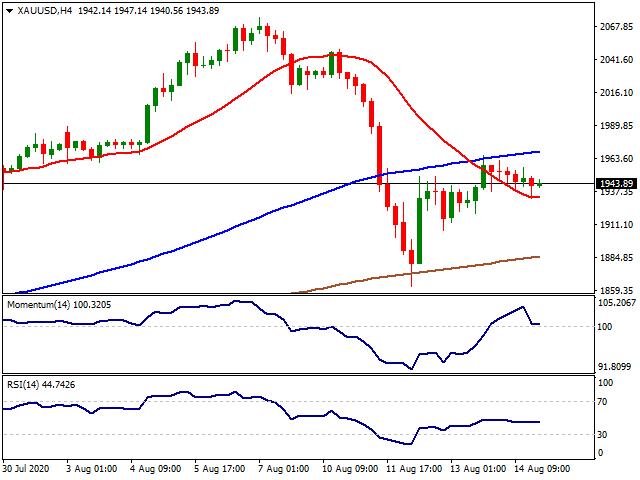 Silver also failed to extend its recovery after last week’s decline alongside Gold. Despite the latest pull-back, precious metals and especially silver still keeps its strong fundamentals for the continuity of the uptrend. Therefore, each pull-back gives investors to increase their Silver positions, positioning them for normalisation in industrial production globally. Meanwhile, the Gold/Silver ratio has rebounded back above 72.00, putting some pressure on silver. Still, the is not far from lows at 69.50, which reached at the beginning of August. In case the Gold/Silver ratio continues its downside trend, Silver will have good chances to get to the test of the recent highs near the 30.00$ level. 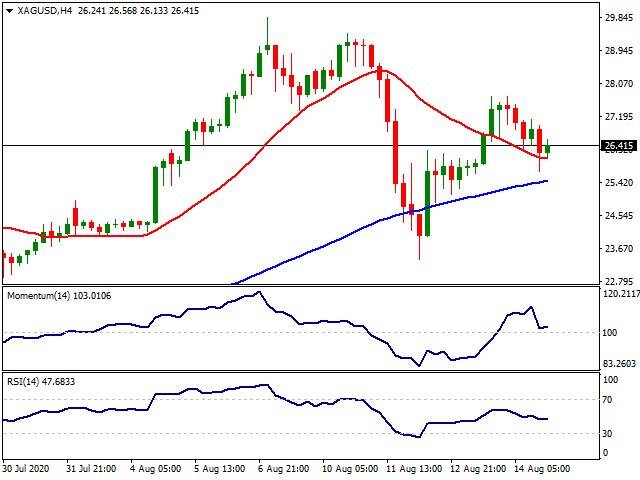 WTI kept its indecisive mood on Friday hovering over 42.00$ level with partial losses. Retail Sales in China contracted by 1.1% yearly in July, and Industrial Production expanded by 4.8% annually to miss the market expectation of 5.1% signalling a possible decline in oil demand. Later in the day, the weekly report published by Baker Hughes Energy Services showed that the US driller cut oil and gas rigs to a recovered low for the fifteenth week. The total number of active oil rigs in the US currently stands at 172. The uncertainty in the demand side is limiting WTI’s gains at the moment. Also, the first wave of the coronavirus pandemic is far from over while markets fear the second wave in wintertime adding more depressive look to global oil demand. 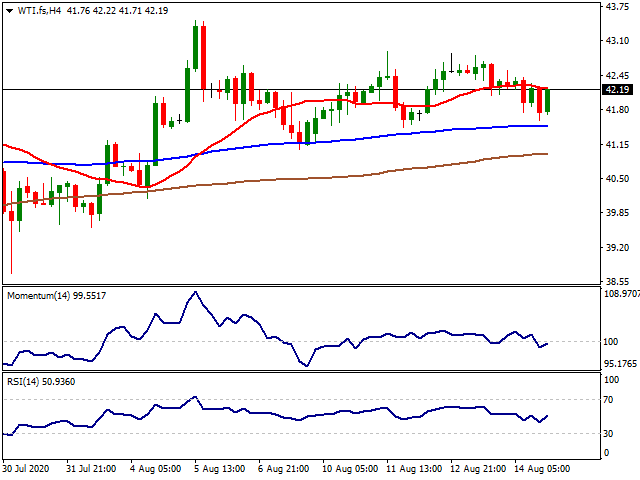 Dow Jones was showing tiredness to sustain its move up and retreated slightly on Friday failing to test 28.000 level. The weak advance in the retail sales data in the US was unable to impress the markets signalling the economy will have a hard time to recover fully. Retail sales rose 1.2% in July, missing the 1.9% forecast from the Reuters survey. On the other hand, the debate in Congress continues regarding the stimulus package over the dispute on the help for the US postal service, which might be used in general elections.

This week will be relatively quiet in terms of macro data releases. On Wednesday, the FOMC minutes will be followed by the investors. On Thursday, weekly initial jobless claims that showed a decline below 1 million will be announced. On Friday, the focus will be on hte preliminary PMI data sets in the US. 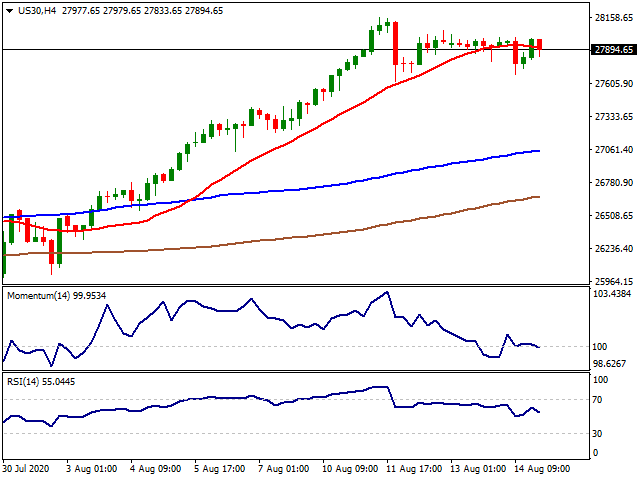