The greenback got to recover some ground this Wednesday, rising during the US session against most of its major rivals. There was no particular catalyst behind the advance, as equities traded with modest gains while US Treasury yields edged marginally lower ahead of the release of the FOMC Meeting’s Minutes. The document was quite similar to the one of the previous meeting, although it added an encouraging line, as policymakers said that economic activity and employment have picked up somewhat in recent months, nothing that anyway remain well below their pre-pandemic levels. The document gave the greenback another lift against its major rivals.

Earlier in the day, the EU released its June Current Account, which came in at €20.69 B better than the previous €7.95 B. The Union also published July inflation, with the monthly CPI down to -0.4% from 0.3% in the previous month. The annual figure, however, came in as expected at 0.4%, while the core annual CPI hit 1.2%, as expected.

This Thursday, the EU will publish June Construction Output, while the ECB will publish the Accounts of its latest meeting. The US macroeconomic calendar will include the August Philadelphia Fed Manufacturing Survey, seen at 21 from 24.1 and Initial Jobless Claims for the week ended August 14, expected at 925K from 963K in the previous week.

The  EUR/USD pair accelerated its slump after losing the 1.1900 level, trading as long as 1.1829. It is now trading below an ascendant trend line coming from the 1.1710. The 4-hour chart shows that the pair has broken below a bullish 20 SMA, trading a few pips below it. Technical indicators have fallen below  their midlines, suggesting additional declines ahead. The immediate support is 1.1820, with a steeper decline expected once below this last. 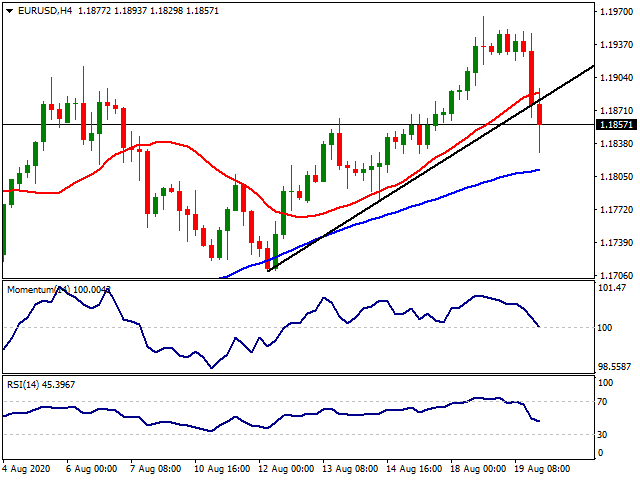 The USD/JPY pair bottomed for the day at 105.09. The pair tried to recover some ground during European trading hours, but sellers capped the advance around 105.60, a Fibonacci level. Bulls made another attempt during US trading hours, reaching a daily high of 105.99 after the FOMC Meeting’s Minutes further underpinned the greenback. The pair advanced despite yields remaining under selling pressure, finding some support in equities, which anyway posted a modest advance.

Japanese data released at the beginning of the day was mixed, as the July Merchandise Trade Balance Total posted a surplus of ¥11.6 B, better than the ¥ -77.6 B expected. However, June Machinery Orders fell on a monthly basis by 7.6% and were down by 22.5% when compared to a year earlier, worse than expected. The country won’t publish relevant figures during the upcoming Asian session.

The USD/JPY pair is battling to recover above the 38.2% retracement of its latest bullish run, after briefly piercing the 68.2% retracement of the same rally. The 4-hour chart shows that the pair has recovered above its 20 and 100 SMA, which stand a few pips below the current level. Technical indicators, in the meantime, recovered some ground but are still unable to clear their midlines.  Beyond the 106.00 level, the pair would face the next relevant resistance at 106.35, the next Fibonacci level. 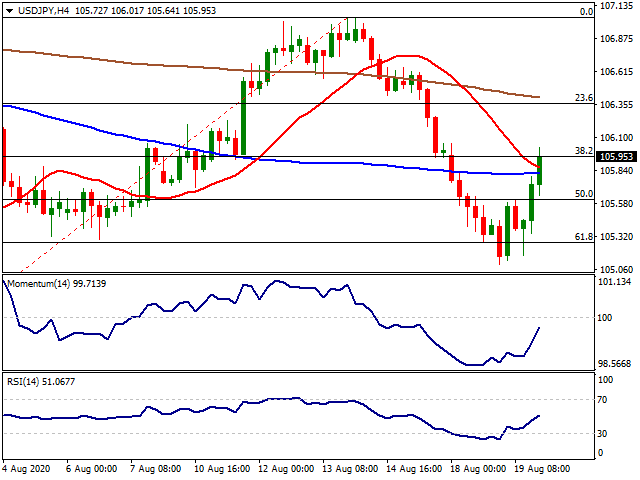 The GBP/USD pair hit 1.3266, its year high before retreating, in spite of encouraging UK data. According to the official release, the UK CPI arrived at 0.4% MoM, better than the -0.1% expected. The annual reading surged to 1.0% while the core figure hit 1.8% in the twelve months to July, beating the 1.3% expected. The dollar’s comeback exacerbated by the FOMC Minutes resulted in the pair falling to  1.3097.

Meanwhile, talks between the UK and the EU about their future trade relationship seem stalled, as the Union rejected UK truckers wide-ranging access to Europe. Earlier in the day, the UK PM’s spokesman said that UK negotiators are hopeful a trade deal can be achieved next month. However, issues on fishing rights and access to financial markets remain unsolved. The UK won’t release macroeconomic data this Thursday.

The GBP/USD pair is trading just a few pips above the mentioned daily low as the US session comes to an end, as demand for the dollar remains strong. The 4-hour chart for the pair shows that it has broken below a now flat 20 SMA,  while it is still above the larger ones, which maintain their bullish slopes. Technical indicators, in the meantime, head firmly lower, with the Momentum still within positive levels but the RSI currently at 42, anticipating a bearish continuation, particularly on a break below 1.3070, the immediate support. 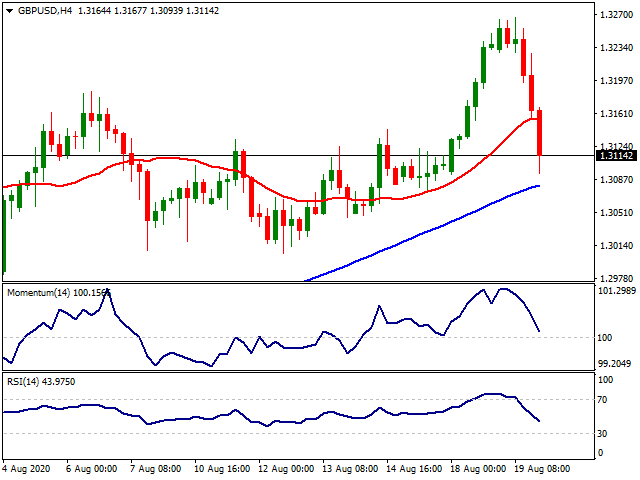 The AUD/USD pair surged to 0.7275, a fresh yearly high, but ended up losing the 0.7200 level in the final hours of trading. Australian data released at the beginning of the day disappointed, as the Westpac Leading Index came in at 0.05% in July, down from 0.5% in the previous month, indicating broad-based weakness in the local economy. The six-month annualized growth rate in the index, which indicates the likely pace of economic activity relative to trend three to nine months into the future, rose to -4.37% in July from -4.43% in June.

Once again, however, the market was all about the greenback. Demand for the American currency surged during US trading hours, later exacerbated by the Federal Reserve’s Minutes. Australia won’t release relevant macroeconomic data this Thursday.

The AUD/USD pair is heading into the Asian opening trading around the 0.7200 level, and it’s at risk of falling further. The 4-hour chart shows hat it has fallen below a bullish 20 SMA, while technical indicators head south almost vertically, challenging their midlines. The 100 SMA stands at around 0.7175, while the pair has some intraday highs and lows in the same area. Bears will likely take their chances on a break below it. 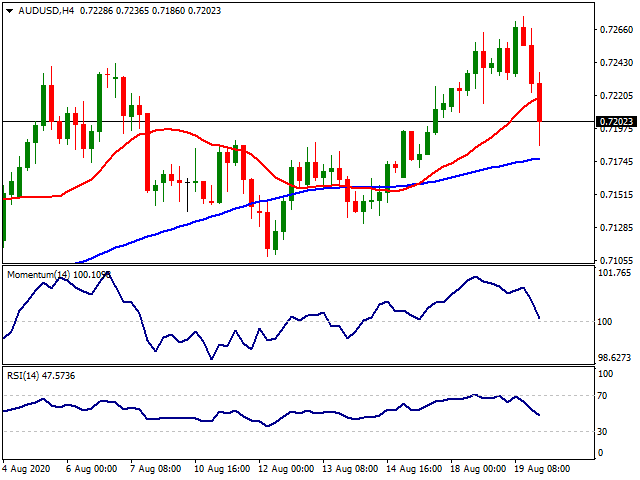 Gold had a sharp reversal on Wednesday as the USD index DXY started to gather strength before the FOMC. After the FOMC, Gold extended its slide close to this week’s low and Wall Street retreated from their all-time highs. Within the text of the Minutes, markets picked up on a reluctance to control the yield curve, which gave the US treasury yields a boost through %0.68. Also, FED’s expectation of a more substantial than expected reversal on retail sales pressured Gold. Despite the latest sharp corrections downside, Gold is still in a clear up-trend supported by the FED’s monetary policies to support the coronavirus pandemic hit economy. Therefore, those retracements can be seen as an opportunity to increase Gold at the portfolios for the longer term. 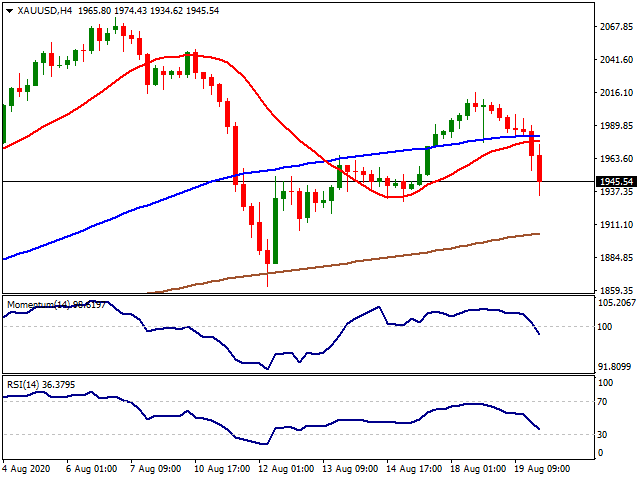 Silver continues to trade alongside Gold as the USD index DXY managed to gain traction on Wednesday. Also, FOMC text pressured Gold which also pushed Silver prices further down. On the other hand, Gold to Silver ratio is trying to hold up over 72.00 level indicating Silver is currently giving better options to trade compared to Gold. Also, Gold retreated from its all-time high with a sharp move while Silver did not move that far from its current high level. 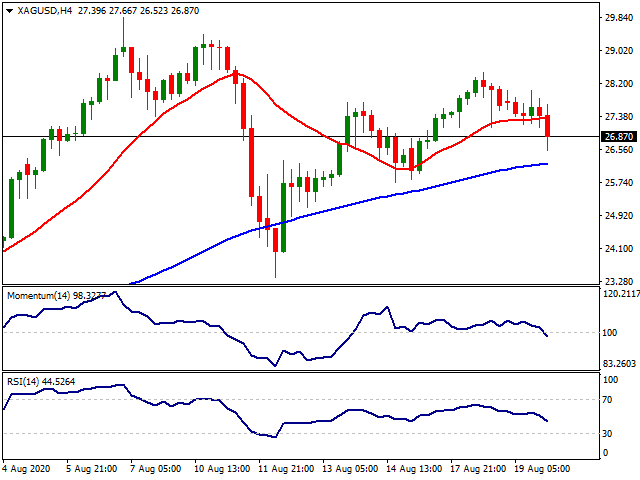 WTI is crawling its way up stuck between the supply control of OPEC and global tensions combined with uncertainty caused by the coronavirus pandemic. On Tuesday, the data published by the American Petroleum Institute showed a decline of 4.2 million barrels in the US crude oil inventories. On the other hand, Crude Oil Stocks Change in the US was -1.6 million barrels in the week ending August 14th, the weekly report published by the US Energy Information Administration (EIA) revealed on Wednesday. This reading came in lower than the market expectation for a decrease of 2.7 million barrels. On the other hand, OPEC+ ministerial meeting may not announce any change in the production cut accord, may praise the participants’ level of compliance. 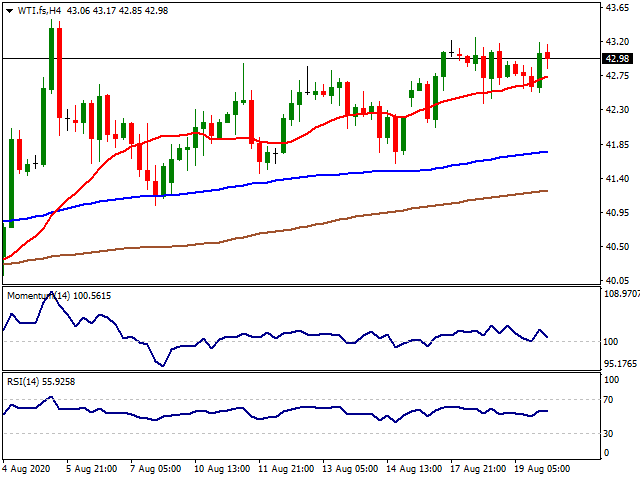 FOMC shook the markets on Wednesday as Wall Street retreated from their all-time highs. The minutes have not offered much in the way of firm guidance, but they have alluded to the idea that yield caps would only provide 'modest benefits in the current environment', which has given the US yields a boost and supported the greenback. Also, The minutes showed that the FOMC is concerned about the road to recovery, and some members suggested that additional accommodation could be required to promote economic recovery or return inflation to 2%. Additionally, the participants noted risks included additional waves of virus spread that could cause credit markets to tighten again as well as loss of fiscal support for households, business and local government. Gold had the worst hit, erasing 65$ daily while Wall Street extended its decline close to the closing bell alongside FED’s cautious-bearish outlook on the economic recovery. 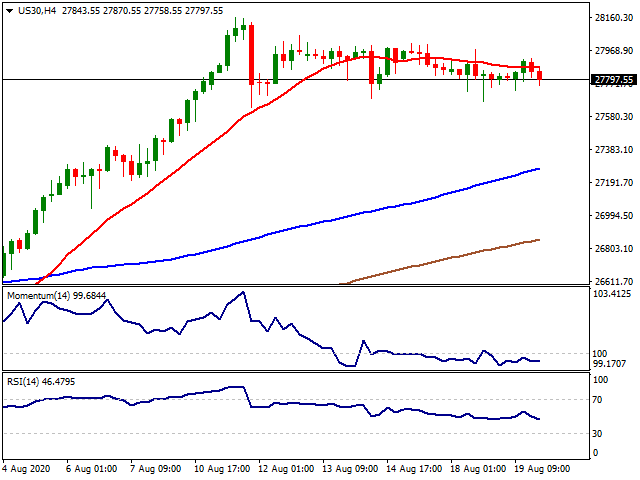