The dollar came under strong selling pressure at the end of the week in the aftermath of a dovish Fed, ending the week with losses against all its major rivals. The EUR/USD pair surged to 1.1919, to end the week with substantial gains just above the 1.1900 mark. The shared currency failed to reach fresh highs, as local data weighed on it. The German GFK Consumer Confidence Survey fell in September to -1.8 missing the expected 1.2. The EU Economic Sentiment Indicator improved in August to 87.7, although the Business Climate was down to -1.33.

In the US, July Personal Spending and Personal Income increased by 0.4% and 1.9%, respectively, while PCE inflation in the same month rose to 1.3% YoY, better than the 1.2% forecast. Meanwhile, equities were down in Asia and mixed in Europe, although Wall Street managed to close in the green.

The upcoming week will be a busy one, as it is the first of the month. This Monday, Germany will publish the preliminary estimates of August inflation, with the annual CPI seen at 0.4% from 0.0% in the previous month.

The daily chart for the EUR/USD pair shows that it has resumed its advance, and will likely extend it during the upcoming sessions. It has spent the week struggling with a flat 20 SMA, finally advancing above it, while technical indicators accelerated higher within positive levels. In the 4-hour chart, the pair settled above all of its moving averages, with the 20 SMA crossing above the 100 SMA, as technical indicators head north, approaching overbought readings. 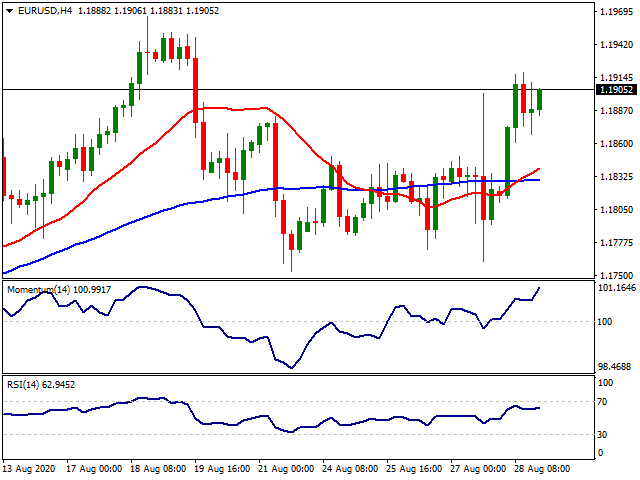 The USD/JPY pair hit 106.94 early Friday, its highest for the week, but collapsed afterwards, as Japan’s PM, Shinzo Abe, announced his resignation over health issues. The pair plunged to 105.19, closing a second consecutive week in the red, this last at 105.35. After eight years leading the country,  Abe´s decision to step down spurred risk aversion by the end of the week. Still, he said that he would continue to lead the country until a new PM is approved.

In the data front, news coming from Japan were discouraging, as August Tokyo inflation was up by 0.3% YoY, below the previous 0.6% and the expected 0.8%. Core annual inflation resulted in -0.3% from 0.4% in the previous month. At the beginning of the week, the country will publish July Retail Trade, and the preliminary estimate of Industrial Production for the same month, seen modestly up in the month.

The USD/JPY pair has neared its August high before plummeting, now nearing 105.09 the monthly low. The daily chart shows that it met sellers around a bearish 100 DMA, then breaking below a mild bullish 20 DMA. Technical indicators, in the meantime, head lower within negative levels. In the 4-hour chart, the pair is set to extend its decline, trading some 100 pips below congesting moving averages, as technical indicators head lower near oversold levels. 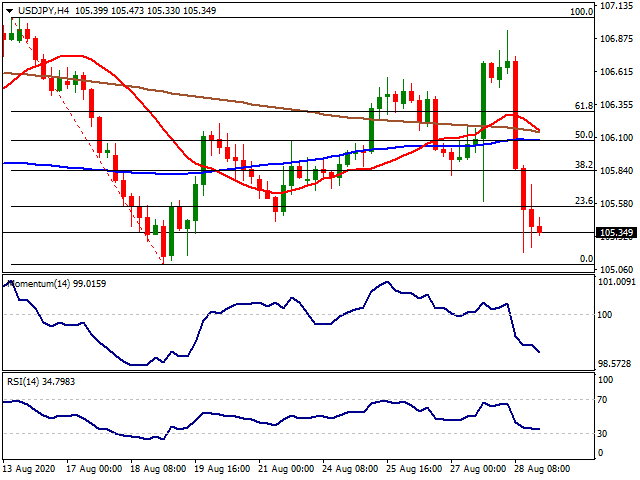 The GBP/USD pair broke higher at the end of the week to reach a fresh 2020 high of 1.3356, ending the week a handful of pips below this last. The absence of UK macroeconomic data and Brexit-related headlines played in favor of the sterling’s advance. However, there are only a few weeks left to seal a deal as EU officers said that they would need a couple of months to ratify any treaty before the end of the transition period on December 31.

Talks are stalemate. The EU refuses to discuss any other issue unless the UK engages on state aid, while UK‘s chief negotiator, David Frost, has said that he will recommend leaving without a deal if demands persist that the UK should align with its rules on state aid. So far, the market seems this negative factor is being left aside. The kingdom won’t publish macroeconomic data this Monday.

The GBP/USD pair is bullish according to the daily chart, as it accelerated its advance beyond a mildly ascendant 20 DMA. Technical indicators, in the meantime, present upward slopes within positive levels. In the shorter-term, and according to the 4-hour chart, the pair is overbought but without signs of bullish exhaustion. The 20 SMA has accelerated north above the 100 SMA, both well below the current level, while the Momentum indicator heads firmly higher and the RSI consolidates around 74. 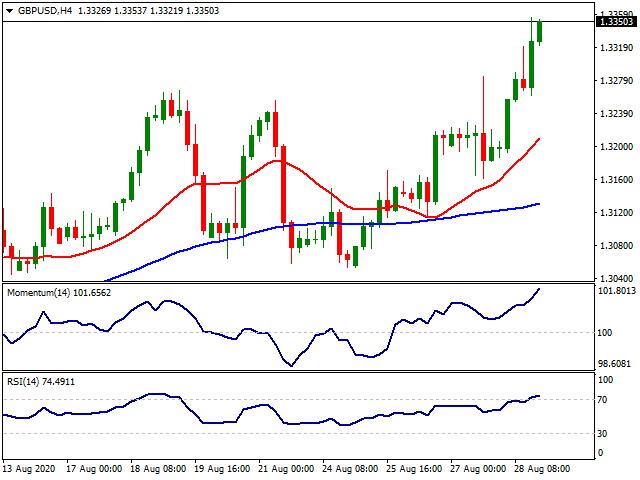 The AUD/USD pair surged to 0.7366 last Friday, a level that was las seen in December 2018. The persistent weakness of the American currency alongside Wall Street’s advance were behind the pair’s run. The Australian macroeconomic calendar was quite scarce last week, leaving the pair to flow on dollar’s demand or the absence of it. Another factor backing the Aussie was gold, as the bright metal closed the week in the green at $1,964 a troy ounce, after falling in the previous two weeks.

This Monday, Australia will release several reports, although the only relevant is August TD Securities Inflation, previously at 1.3% YoY. Additionally, China will publish the official NBS Manufacturing PMI for August, seen at 48.7 from 51.1 in the previous month, and the Non-Manufacturing PMI, expected at 52.1 from 54.2 in July.

The AUD/USD pair is heading into the weekly opening trading at the mentioned high, and bullish according to technical readings. In the daily chart, the pair has extended its advance above a still flat 20 DMA, while the longer ones keep advancing below it. Technical indicators, in the meantime, head firmly north at August highs. In the 4-hour chart, the pair is trading far above bullish moving averages, while technical indicators maintain their strong bullish slopes in extreme overbought readings. 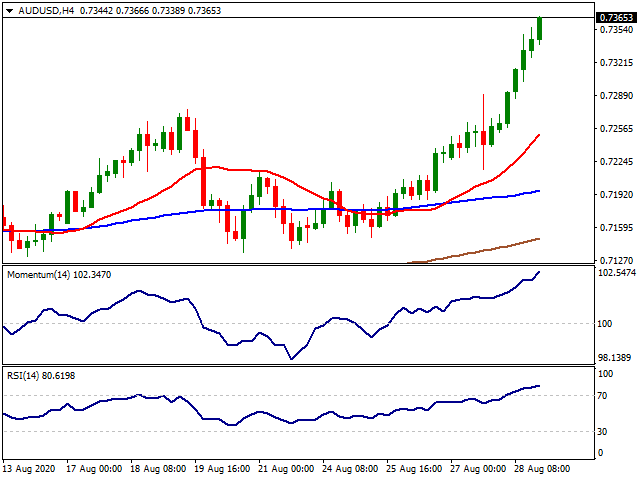 In the aftermath of the Jackson Hole symposium, Gold managed to re-gain a portion of its lost ground on Friday. On Thursday at Jackson Hole Fed Chair Powell delivered his speech where he outlined the changes that the FOMC are due to make to their policy. The Fed is now looking to achieve an average inflation target of %2 and there will also now be more focus on employment at the lower end of the income spectrum. In this case, The Fed will wait for an increase in the interest rates even if the inflation surpasses %2 in the US. Therefore, Gold will continue to benefit low to negative interest rate conditions for a longer period and will likely to extend its advance. At the moment, Golds advance is blocked only with the positive developments being made about the coronavirus vaccine. However, there is still no solid resolution achieved and the uncertainty is intact as we get closer to autumn. 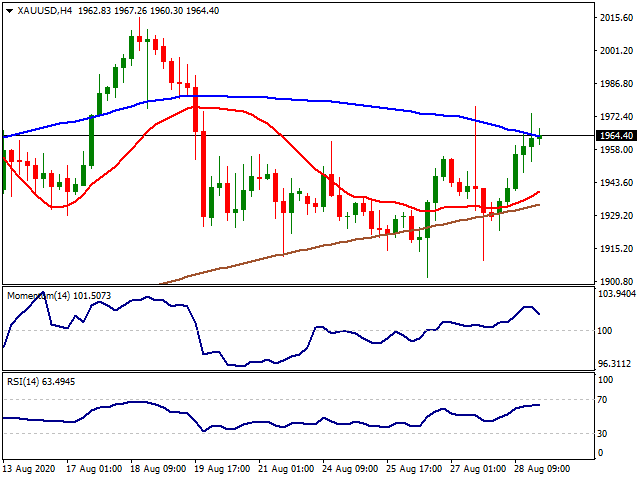 Silver trading continues to follow the precious metal scheme in line with the retracement seen in the USD index DXY. The index slid back below 93.00 level in the aftermath of Powell’s speech at Jackson Hole symposium. On the other hand, Gold to Silver ratio remains in between 71.00 and 73.00 levels in an attempt to slide below 71.00 signalling Silver’s better performance compared to Gold lately. On the other hand, this week’s PMI data sets both from China and the US will indicate the direction of the normalisation of industrial production. Therefore, Silver trading might be affected by the data readings due to its industrial usage. 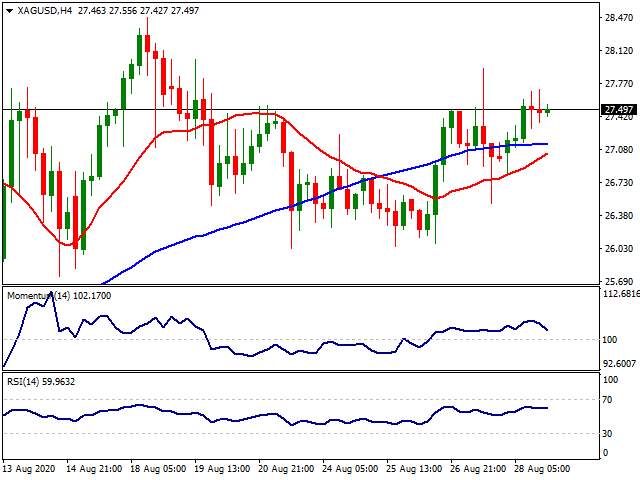 WTI kept its steady but slow incline on Friday ending the week a tick below 43.00$ mark. Hurricane Laura made landfall in Louisiana and left the Gulf of Mexico mostly safe ending the disruption in the production activities. The Baker Hughes oil rig data came in 180 and stayed shy of the expectation at 183 on Friday. On the other hand, the uncertainty surrounding the Covid-19 pandemic and tension between the US and China is suppressing oil prices for further advances while the decline in the USD index DXY is supporting WTI. This week the PMI data sets will likely to have an impact on the energy prices in general as an indicator of the energy demand. 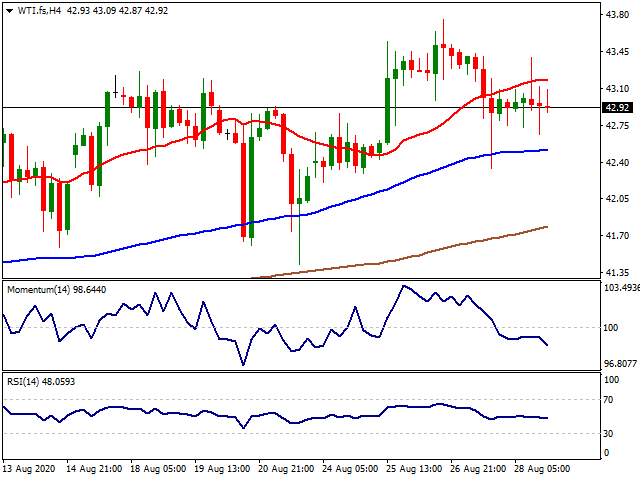 Dow Jones started Friday trading with a small bullish gap and managed to advance its incline thorough the day. Personal Spending in the US rose by 1.9% monthly in July, the data published by the US Bureau of Economic Analysis revealed on Friday. This reading followed June's increase of 6.2% (revised from 5.6%) and came in slightly better than the market expectation of +1.5%. Further details of the publication showed that Personal Income, which declined by 1% in June, expanded by 0.4%, compared to analysts' estimate for a decrease of 0.2%. Despite the upbeat data reading, the USD index DXY once again slid below 93.00 level and ended the week at 92.30 and the 10-year yields retraced from its weekly highs through %0.72. Powell’s dovish stance is digested as stock market-friendly and therefore, all the Wall Street indexes kept their bullish runs intact. 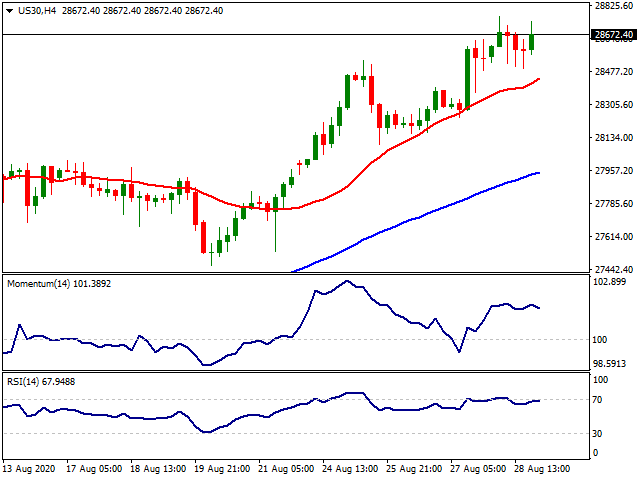