The EUR/USD pair fell to 1.1650, a fresh two-month low as speculative interest kept adding dollar’s longs. Data released this Wednesday was mixed but showed that economic growth remains sluggish. The preliminary estimates of the Markit PMIs showed that services output n the Union fell into contraction territory, with the EU index printing at   47.6 from 50.5 in August. Manufacturing activity was mixed across the Union,  although the index improved from 51.7 to 53.7. In the US, on the other hand, business activity remained in expansion territory, although services growth was softer than anticipated.

Further fueling dollar’s demand, Wall Street was unable to hold on to pre-opening gains and turned red. Federal Reserve Chair’s Jerome Powell testified again before Congress, and alongside Treasury Secretary Steven Mnuchin said that they are studying ways to provide additional support to small businesses without entering into details. As he did on Tuesday, Powell urged for fiscal support.

This Thursday, Germany will publish the IFO Business Climate, foreseen at 93.8 from 92.6 previously. The US will release Initial Jobless Claims for the week ended September 18, while Powell and Mnuchin will testify before the Senate Banking Committee.

The EUR/USD pair ends Wednesday trading below the 1.1700 level, maintaining its bearish bias despite being oversold. The 4-hour chart shows that the Momentum indicator has bounced from oversold readings, but also that it holds well into negative levels. The RSI indicator, in the meantime, consolidates near oversold readings, as the pair develops well below all of its moving averages, with the 20 SMA maintaining a sharp bearish slope below the larger ones. Further declines are to be expected on a break below 1.1660, the immediate support level. 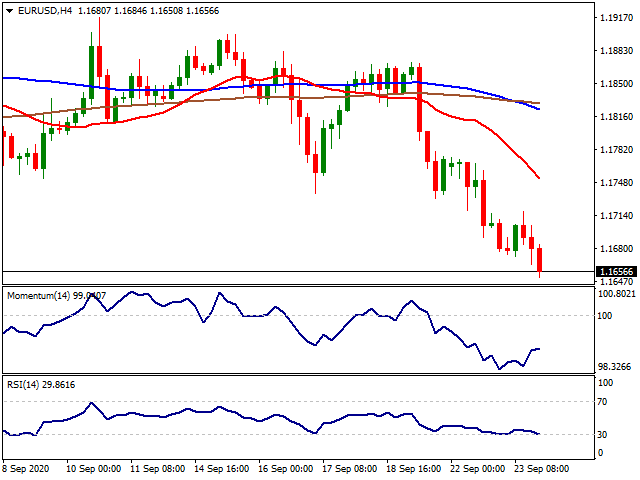 The USD/JPY has advanced for a third consecutive day, reaching a weekly high of 105.48. As it has been happening since the week started, is all about demand for the greenback. The pair held on to gains by the end of the day, despite the sour tone of Wall Street. US Treasury yields, in the meantime, remained within familiar levels, trapped between concerns about economic growth and optimism related to a coronavirus vaccine, as Johnson & Johnson became the fourth company to start a phase three testing.

In the data front, Japan published at the beginning of the day the preliminary September Jibun Bank Manufacturing PMI, which came in at 47.3 as expected, improving modestly from 47.2 in August. The country also published the July All Industry Activity Index, which was up 1.3%, missing expectations of 3.3%. Also, BOJ’s Kuroda offered a speech and said that the local economy is showing signs of a turnaround, adding that the central bank may extend the deadline for aid to pandemic-hit firms. During the upcoming Asian session, the BOJ will release the Minutes of its latest meeting.

The USD/JPY pair has extended its rally to reach the 61.8% retracement of its latest daily decline around 105.40. The 4-hour chart shows that the pair further advanced above a now bullish 20 SMA, while the larger ones have lost their bearish strength, standing above the current level. Technical indicators, in the meantime, reached overbought readings, retreating just modestly ahead of the close. The rally will likely continue on a break above the mentioned daily high. 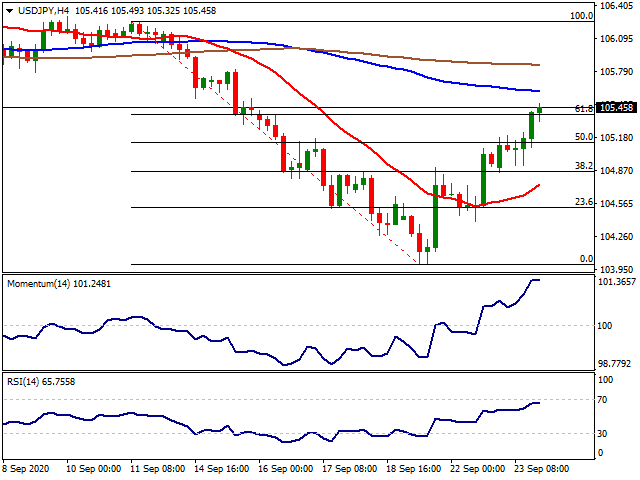 The GBP/USD  remained under pressure, ending the day little changed in the 1.2710 price zone, after printing a daily low of 1.2674. The pair advanced during European trading hours, on the back of Brexit-related headlines, as EU’s chief negotiator Michel Barnier said that the EU is determined to get a trade deal with the UK but will be firm. He added that the transition period ends on 31 December and that it cannot be extended.

Markit published the preliminary estimate of the UK Manufacturing PMI, which came as expected at 54.3. The services index, however, missed expectations with 55.1. Both figures resulted below the final August readings, signaling a fading economic recovery, by the time the government announced new coronavirus restrictive measures. This Thursday, the kingdom will publish the CBI Distributive Trades Survey on realized sales, foreseen at -10% from -6% in the previous month.

The latest GBP/USD´s recovery seems corrective, as technical readings suggest limited buying interest. The 4-hour chart shows that technical indicators recovered from oversold readings, but resumed their declines well below their midlines. The 20 SMA, in the meantime, heads firmly lower at around 1.2810, providing dynamic resistance, while the larger ones also gain bearish traction. A steeper decline is to be expected on a break below 1.2665, a strong static support level. 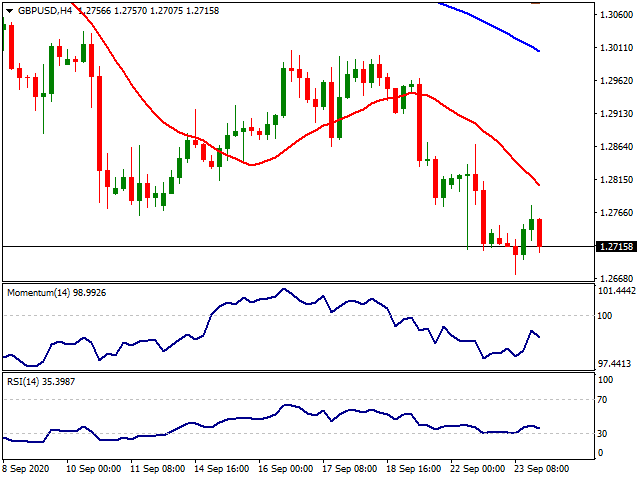 The AUD/USD pair extended its weekly decline to 0.7075, holding around the mentioned low ahead of the Asian opening, as persistent demand for the greenback coupled with a sharp decline in US indexes. Adding pressure on the Aussie, gold prices edged lower for a third consecutive day, falling to $1,860.80, its lowest in two months.

Australian data released at the beginning of the day were mixed, as the Commonwealth Bank Services PMI came in at 50, while the Manufacturing PMI printed at 55.5, both beating expectations. However, the preliminary estimate of August Retail Sales resulted at -4.2%,  from 3.2% in the previous month. The country won’t publish macroeconomic figures this Thursday.

The AUD/USD pair is extremely oversold according to intraday technical readings, but with no signs of downward exhaustion. The 4-hour chart shows that the 20 SMA heads south almost vertically after crossing below the 200 SMA. The Momentum indicator has bounced modestly from its daily low, but the RSI indicator keeps heading lower, despite standing at 23. The pair is currently battling around August low 0.7075, en route to the psychological 0.7000 threshold. 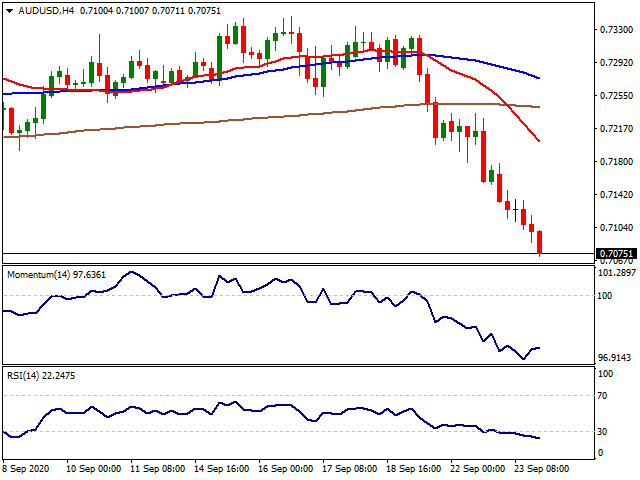 Gold extended its decline for the third consecutive day sliding well below 1.900$. The USD index DXY is holding to its gains over 94.00 level with the updated doubts about a new wave of the monetary or fiscal stimulus package and the pandemic situation in the US and EU keeps getting worse. The greenback hit its highest level in six weeks due to the change in risk appetite and precious metals faced pressure. On the other hand, FED’s Evans’s surprise comments about raising the rates without waiting for the %2 inflation target also gave an extra boost to USD. 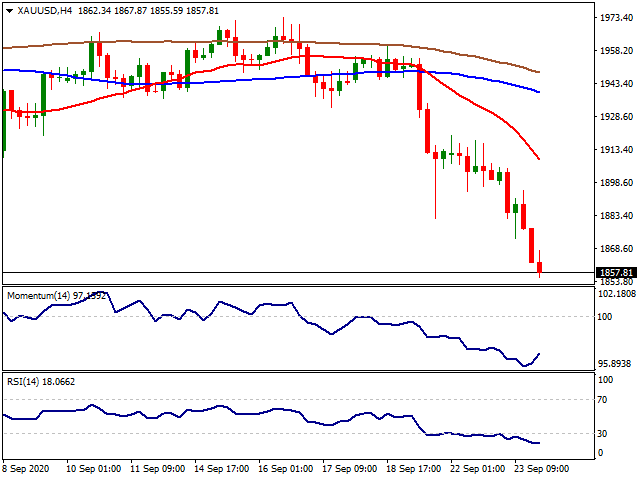 Silver also extended its slide alongside Gold as the USD index DXY continues to march north. On the other hand, lately Silver underperformed Gold which carried the Gold to Silver ratio to 81 levels from 72 levels as the white metal slashed %12 this week alone. Lack of updates on the new stimulus package in the US keeps pressuring the precious metals while the pandemic uncertainty still doubts a recovery on industrial production which affects Silver demand directly. 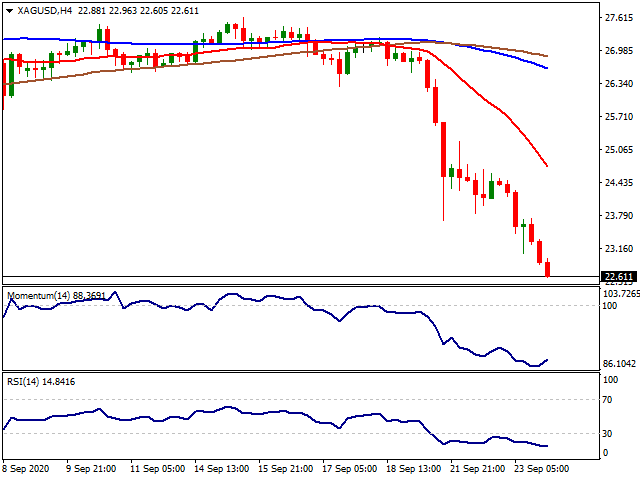 WTI failed to extend its recovery over 40.00$ and had a tight range, indecisive trading session on Wednesday. The renewed USD strength put WTI under pressure while the black gold has managed to bounce back after the OPEC+ group announced the output cuts will continue till December. However, late on Tuesday, the API reported an unexpected 691K build in crude oil supplies during last week which limited the move up in WTI. 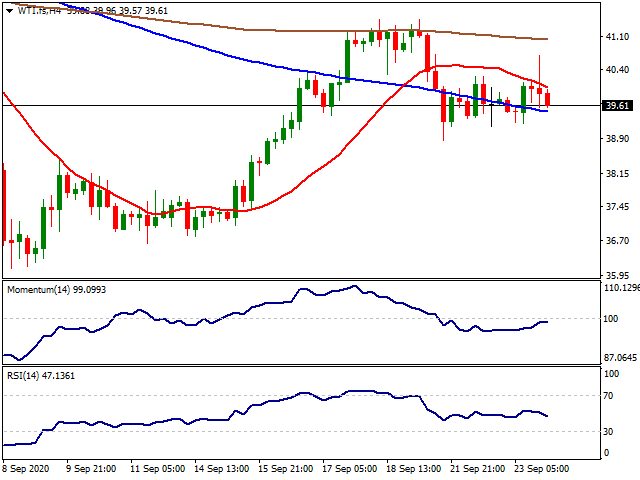 Dow Jones erased all its gains made on Tuesday sliding below 27.000 level. Tech-led sell-off intensified by the end of the session while positive news about the vaccine and Trump's move to ease fears of a second lockdown did little to save the index. The Housing Price Index (HPI) in the US rose 1% in July, the Federal Housing Finance Agency's (FHFA) monthly report showed on Wednesday. This reading matched June's reading (revised from 0.9%) and came in higher than the market expectation of 0.5%. On the other hand, Markit Manufacturing PMI edged higher to 53.5 in September vs. 53.2 expected signalling a strong rebound in the economic activity. The USD index keeps its rally while the uncertainty surrounding the second stimulus package continues to deteriorate the market sentiment. Federal Reserve Chair Jerome Powell said on Wednesday the central bank was not planning any "major" changes to its Main Street Lending Program. 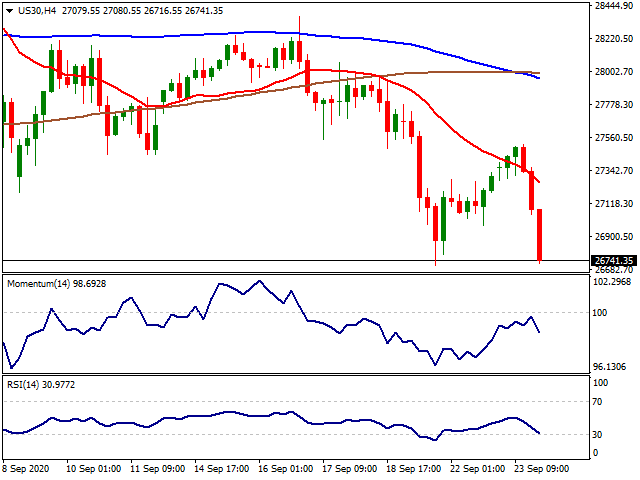 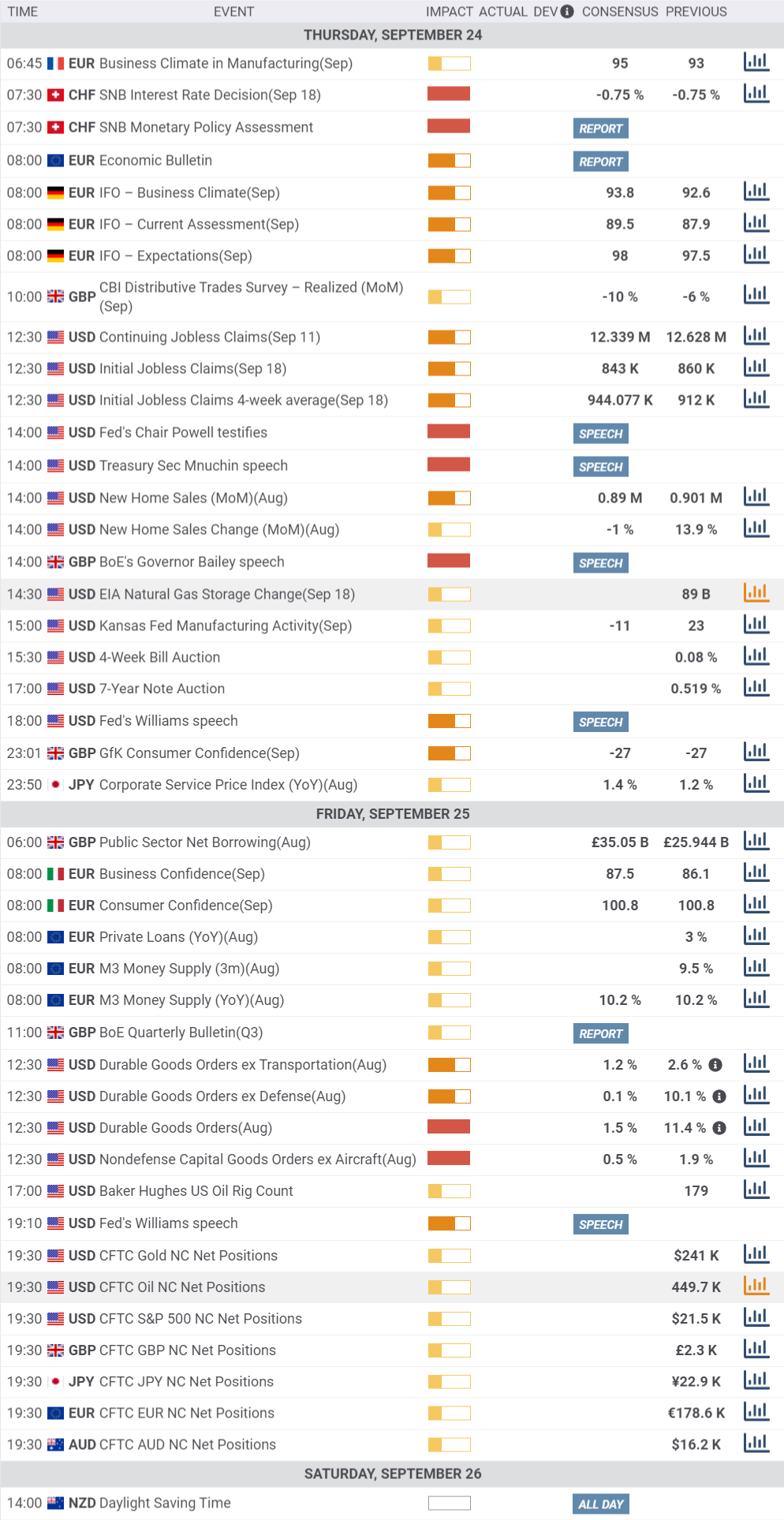