Risk aversion returned with a vengeance, and the American currency was the overall winner. Following a dull start to the week due to a US holiday, investors jumped into the greenback in search of safety. The absence of a US stimulus package, no progress in a Brexit deal, and the rising number of coronavirus contagions followed with their respective restrictions, are behind the dismal mood.

Macroeconomic data exacerbated the sour sentiment, as Germany published the final readings of September inflation, which came in as expected, printing at -0.2% YoY. The country also released the October ZEW Survey, which showed that the Economic Sentiment contracted by more than anticipated, down to 56.1 from 77.4. For the EU, the sentiment was also worse than anticipated, falling from 73.9 to 52.3. As for the US, the country also published its final September CPI, which came in at 1.4%, YoY as expected. The core reading, however, missed the market’s forecast of 1.8% and was confirmed at 1.7%. Subdued inflation on both shores of the Atlantic adds to concerns about economic growth.

This Wednesday,  the EU will publish August Industrial Production figures, while ECB’s President Lagarde is due to offer a speech. The US will offer September PPI and a speech from Fed’s Clarida.

The EUR/USD pair has accelerated its decline after breaking below a daily ascendant trend line coming from late September, now providing resistance in the 1.1770 area. It is trading near a daily low of 1.1729, maintaining its bearish stance. The 4-hour chart shows that it is currently struggling around a bearish 100 SMA, while technical indicators hover near oversold readings, partially losing their bearish strength, but still signaling a downward extension ahead. The ongoing decline will likely accelerate on a break below 1.1720, the immediate support. 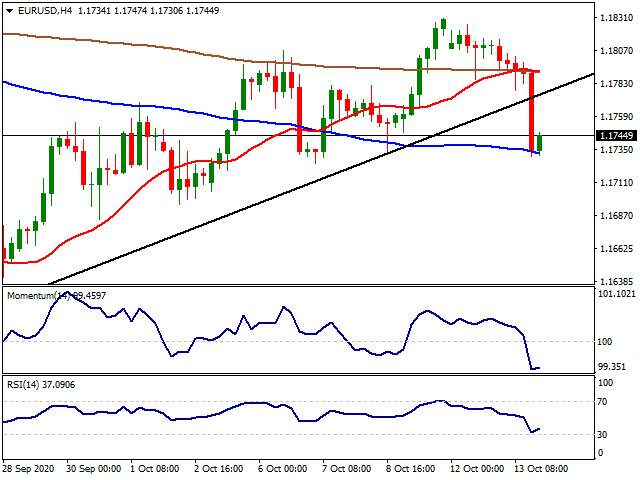 The USD/JPY pair was able to post a modest intraday recovery, reaching a daily high of 105.62 to later settle in the 105.50 price zone. As usual when risk-off leads lately, the pair was trapped between the demand for the greenback and falling equities, these lasts limiting advances. Meanwhile, US Treasury yields edged lower, with the yield on the benchmark 10-year note fell to 0.72%.

The Japanese macroeconomic calendar had little to offer, as the country published September Money Supply, which increased 9%, above the 8.1% expected. This Wednesday, the country will release August Industrial Production, seen up 1.7% MoM and down 13.3% when compared to a year earlier. Capacity Utilization in the same month is foreseen up 3.6%.

The USD/JPY pair is trading a few pips above its 100 SMA in its 4-hour chart, but below the 20 and 200 SMAs, with the shortest heading south, and skewing the risk to the downside. Technical indicators in the mentioned chart have turned flat within negative levels, indicating limited buying interest. The pair would need to advance above 105.80 to become more attractive for bulls, while bears will likely add to their shorts on a break below 105.00. 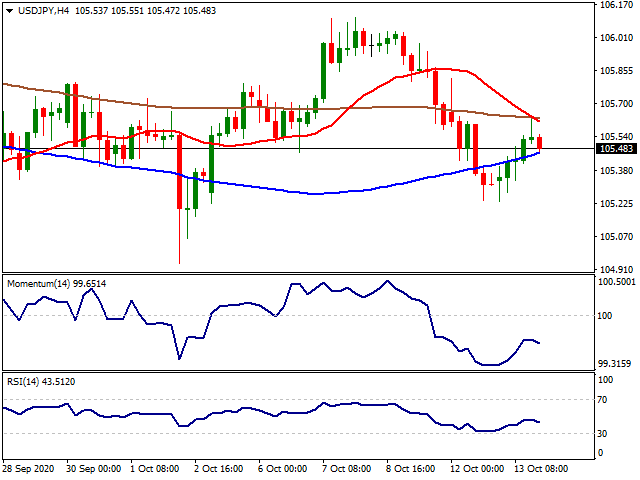 The GBP/USD pair fell to a fresh weekly low of 1.2921, as renewed demand for the greenback coupled with mounting tensions related to a post-Brexit trade deal between the UK and the EU. Also, the UK released its latest employment data, which was mixed. The ILO Unemployment rate increased to 4.5%, worse than expected, in the three months to August. However, the number of unemployed people in the kingdom beat expectations in September, as it came in at 28K against the 78.8K expected.

In the Brexit front, EU’s chief negotiator Michel Barnier said that the EU is united, and will continue to work for a “fair deal” with the UK in the coming days and weeks. It´s worth noting that UK PM Boris Johnson has menaced to abandon talks if a deal can’t be reached this week. The UK won´t publish relevant macroeconomic data this Wednesday.

The GBP/USD pair is trading near the mentioned daily low, and at risk of extending its decline, despite losing over 130 pips this Tuesday. The 4-hour chart shows that it has broken below its 20 and 200 SMA, while the 100 SMA remains directionless around 1.2880. Technical indicators have crossed their midlines into negative territory, maintaining their bearish slopes and further supporting a bearish extension.

The Australian dollar was among the worst performers this Tuesday, falling against the greenback to 0.7150 and holding nearby as the day comes to an end. The Aussie was hit by news indicating that China has reportedly banned imports of Australian coal, leaving some Australian vessels stuck at Chinese ports. Tensions between the two economies surged after Australia backed an investigation over the origins of COVID-19. The sour tone of equities maintained the pair under pressure throughout the day.

At the beginning of the day, China published its September Trade Balance, which in dollar terms, it posted a surplus of $37B, below expected amid a sharp rise in imports, which surged 11.6%, the strongest growth since December 2019.  This Wednesday, Australia will publish October Westpac Consumer Confidence, seen at 9.9% from 18% in September and HIA New Home Sales for August.

The AUD/USD pair is poised to extend its decline, mainly if it remains below 0.7170, now the immediate resistance level. The 4-hour chart shows that it is barely holding above a bearish 100 SMA, while below the other moving averages, as technical indicators head firmly lower within negative levels. A strong static support level comes at 0.7095, the low set this month. 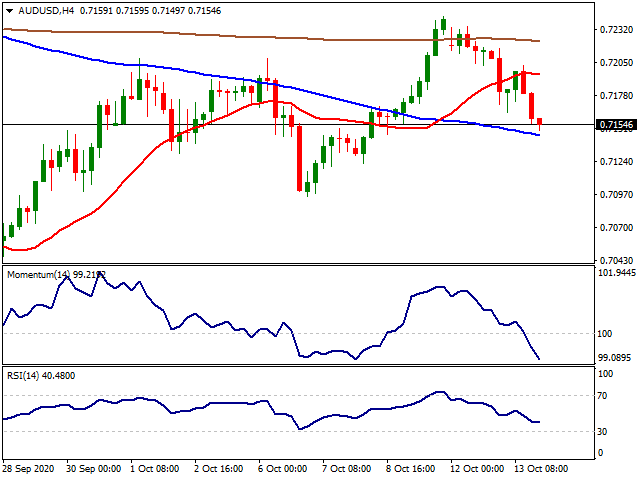 Gold sank below $1,900 on Tuesday with the sudden shift in risk appetite. Stimulus talk in the US is the current risk driver in the markets and mixed developments are causing volatile trading sessions. House Speaker N.Pelosi said the recent proposal from President Trump on extra fiscal stimulus fell significantly short of expectations. Pelosi, however, expects both parties could clinch a deal eventually. The uncertainty sparked a flight to safety and the USD index DXY managed to lift itself to mid-93.00 levels after testing its lowest level in three weeks. On the other hand, in general, Gold is sensitive to inflation figures and the US Consumer inflation increased for a fourth straight month in a row as a result of extreme liquidity. Rising inflation in the US combined with a panic run to USD fueled by the uncertainty on the stimulus package pushed Gold below the $1,900 level. Also, Johnson and Johnson paused its COVID-19 vaccine trial due to an unexplained illness which also triggered the risk-off flows. 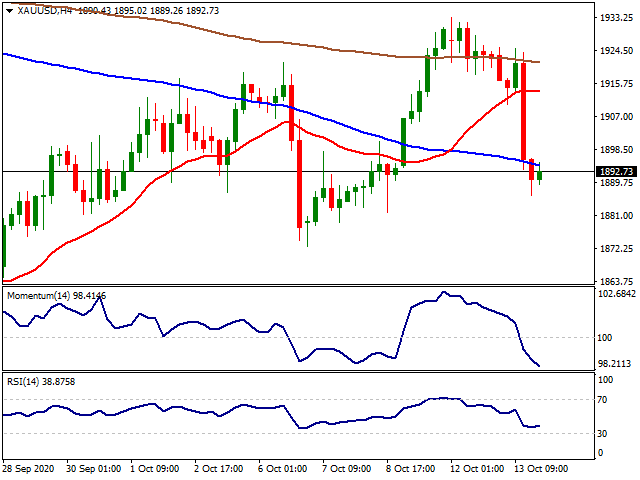 Silver also stayed under heavy selling pressure on Tuesday as the risk sentiment shifted. The white metal tested sub-$24.00 but managed to regain the physiological level later in the trading session. On the other hand, the decline seen in Silver was more intense compared to Gold lifting Gold to Silver ratio over 78.00 levels again. Apart from the daily fluctuations caused by extraordinary developments such as the Covid-19 pandemic, in the long run, both extreme liquidity and possible demand from the manufacturing sector are in favour of Silver. Renewable energy stimulus programs are supporting solar panel production and Silver, for now, is one of the main components of solar panels. 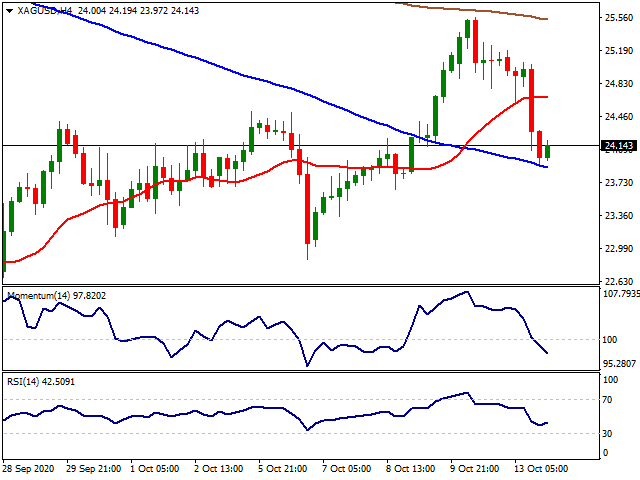 After the sharp decline seen both on Friday and Monday, WTI tried to re-gain at least its losses made on Monday. Lately, the correlation between the USD and WTI is broken as under normal circumstances, weaker USD should support WTI. However, the USD index gained traction on Tuesday while WTI also had a positive trading session. Crude imports rose to the equivalent of 1.18 million barrels in September in China, according to data by the General Administration of Customs. This 2.1% month-on-month increment has eased market concerns about the negative impact on the second COVID-19 wave on global demand for oil and supported WTI. On the other hand, WTI’s positive run was limited as Libya’s Sharara oilfield resumed its activity on Sunday, Norwegian oil workers ended the strike and the oil industry resumed its activity in the Gulf of Mexico area following the pass of Hurricane Delta. 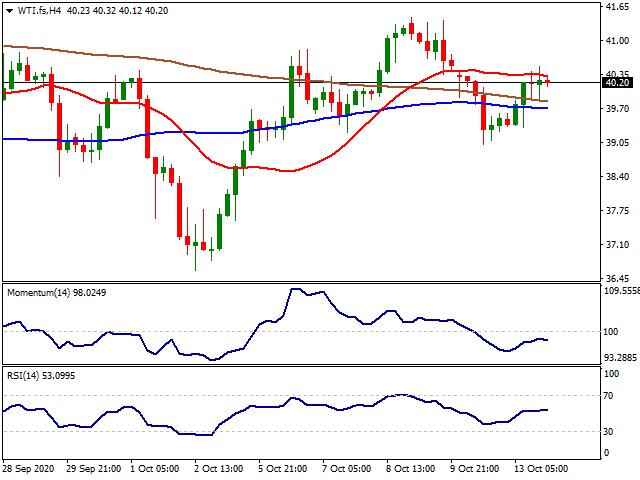 Global equity markets stayed under pressure on Tuesday as Johnson & Johnson paused their Covid-19 vaccine trials due to unexpected side effects occurred in some test subjects. On the other hand, the uncertainty regarding the second stimulus package in the US also pressured the markets. A possible Democrat win for the Senate will most likely open doors for at least $2.2 trillion USD worth of stimulus package. On the macro data side, inflation in the US, as measured by the Consumer Price Index (CPI), edged lower from 0.4% to 0.2% on a monthly basis in September, the report published by the US Bureau of Labor Statistics showed on Tuesday. On a yearly basis, the CPI rose to 1.4% from 1.3% as expected. Reflecting the risk aversion, the USD index DXY managed to re-gain mid-93.00 levels while precious metals and indexes retraced back. 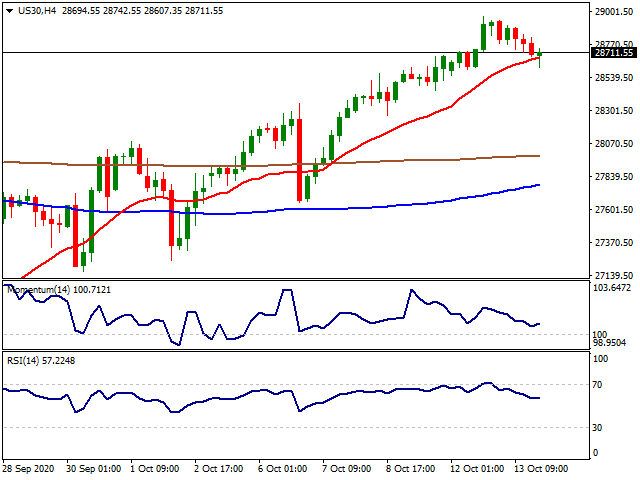