The EUR/USD pair fell this Monday to  1.1802, ending the day in the red in the 1.1810 price zone. The market’s mood was on the back foot, amid coronavirus developments in Europe, with several countries reporting a record number of new cases. Spain has established this Sunday the state of alarm for six months and imposed a national curfew. Italy has also announced curfews, already in place in France. The dismal sentiment was also supported by the lack of progress in a US stimulus aid package. US advisor Larry Kudlow said that talks slowed but not ended. At this point, chances of a deal before the election are null, and investors are taking note.

In the macroeconomic front, Germany published the October IFO survey, which showed that the Business Climate in the country contracted to 92.7 in October from 93.2, missing expectations. The assessment of the current situation surged to 90.3, but expectations over the future also fell coming in at 95. In the US, the September Chicago Fed National Activity Index fell from 1.11 in August to 0.27, while New Home Sales fell by 3.5% MoM. On Tuesday, the focus will be on US September Durable Goods Orders, seen up 0.7% from 0.5% in August.

The dollar is up against most major rivals in a risk-averse environment, but the EUR/USD pair saw buyers defending the 1.1800 level. The pair is neutral-to-bearish in the near-term, as, in the 4-hour chart, it is developing below a mildly bearish 20 SMA, but above converging 100 and 200 SMA. Technical indicators, in the meantime, remain below their midlines, with modest downward slopes. Bears will have better chances on a break below 1.1770, a strong static support level. 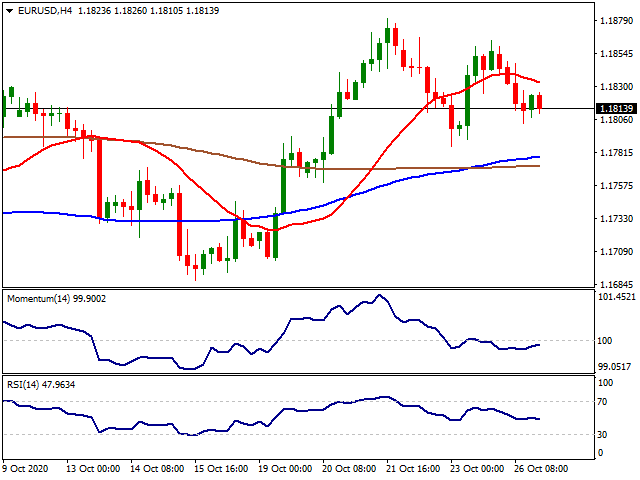 The USD/JPY pair surged to 105.05 during US trading hours, as the greenback partially benefited from risk-aversion. However, the pair retreated from the level as Wall Street collapsed, with the three major indexes losing over 2.5% each. US Treasury yields also fell, with the dismal mood backed by the record surge in coronavirus cases in Europe and the US and the lack of progress in US stimulus talks.

Japan published at the beginning of the day, the September Corporate Service Price Index, which improved from 1.1% to 1.3% YoY. The August Leading Economic Index came in at 88.4, missing expectations of 88.8 The Coincident Index for the same month printed at 79.2, also below the market’s forecast. The country’s macroeconomic calendar will remain empty this Tuesday.

The  USD/JPY pair retains modest intraday gains, trading in the 104.80 price zone. The 4-hour chart shows that the pair has managed to hold above its 20 SMA, which have lost its bearish slope. In the mentioned time-frame, the pair remains below converging 100 and 200 SMAs. Technical indicators, in the meantime, have turned flat around their midlines. The decline may resume on a break below 104.70, the immediate support, while bulls can have better chances if the manages to advance beyond 105.40. 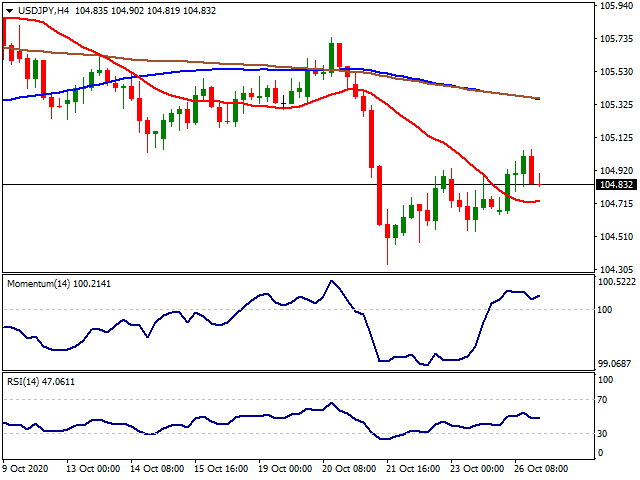 The GBP/USD pair is ending Monday with modest losses around 1.3020, partially affected by the renewed dollar’s demand and partially due to Brexit concerns. The pair surged to a daily high of 1.3074 as news that EU’s chief negotiator Michel Barnier decided to extend his stay on London after weekend talks, and speculative interest understood it as progress. The pair later eased as UK PM Boris Johnson’s spokesman said that there is “much work to be done” and that significant gaps remain in the most difficult areas.

The UK didn’t publish macroeconomic data on Monday but will release the October CBI Distributive Trade Survey on realized sales this Tuesday, seen up a modest 1% from 11% in September.

The GBP/USD pair is holding above the 1.3000 figure, although it briefly pierced the level a couple of times throughout the day to bottom at 1.2992. The risk has turned to the downside, as, in the 4-hour chart, a mildly bearish 20 SMA capped the upside. Technical indicators hold within negative levels, although their directional strength is limited. A steeper decline could be expected on a break below 1.2980. 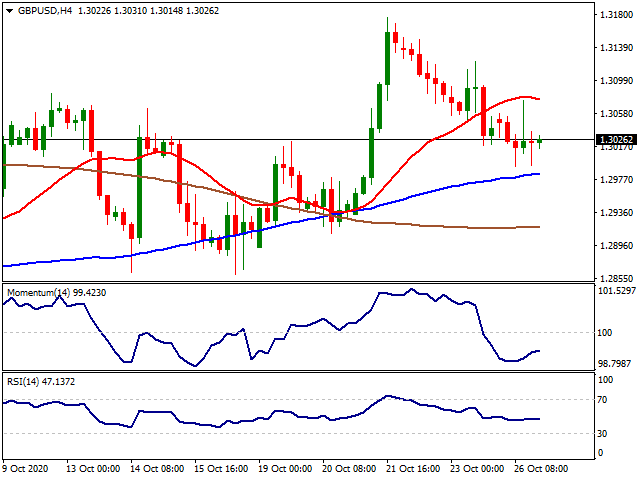 The AUD/USD pair is ending the first day of the week as it started it around 0.7130, reverting an early slide to 0.7102. The Aussie was underpinned by an upbeat September Trade Balance, as the trade surplus surged to 5114 M according to preliminary estimates. Imports decreased 1% in the month, amid supply disruptions due to the coronavirus, while exports were up 3%. The pair recovered, despite the sour tone of US equities, in part helped by steady gold prices, as the bright metal held above $1,900.00 a troy ounce. Australia won’t release macroeconomic data this Tuesday, although a couple of policymakers will offer speeches in separate events.

The  AUD/USD pair is neutral in the near term, as the 4-hour chart shows that technical indicators hold within positive levels with modest bullish slopes. At the same time, however, the pair battles with its 20 SMA but stands below the 100 and 200 SMA. Chances of additional gains are not only conditioned to dollar’s weakness, but also to the latest RBA Meeting’s Minutes, which hinted at an upcoming rate cut, spooking bulls. 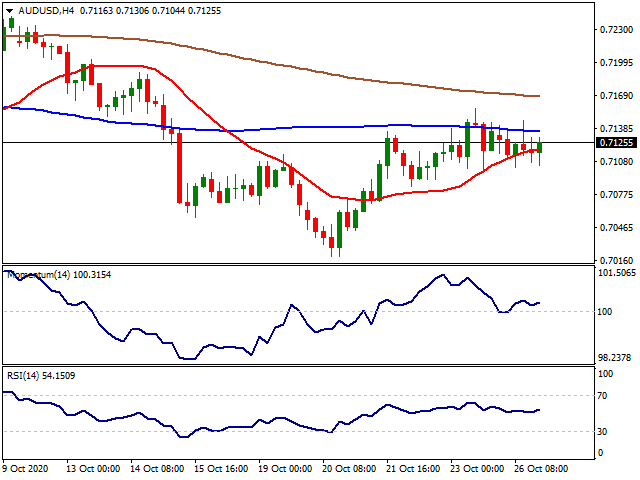 Gold continues its consolidation phase hovering around $1,900 in the light of the elections and stimulus talks. Especially the stimulus talks continue to be a bigger risk driver then the Covid-19 pandemic at the moment. Precious metals are stimulus-positive as more liquidity injected into the markets is expected to press the USD through lower levels. Therefore, any statement fuelling the uncertainty on the deal is pressuring Gold. Reflecting the flight to safety on the first trading day of the week, the USD index DXY managed to re-gain 93.00 levels. Also, the US 10-year yield sank through 0.80 levels. Despite the move-up seen in the USD, Gold managed to protect its state and managed to hold its important level of $1,900. 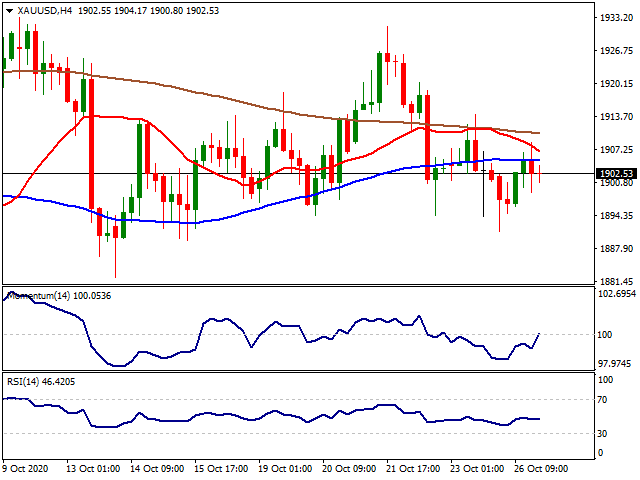 Silver kept its decline on the third consecutive day of trading pressured by the move-up seen in the USD. The stimulus uncertainty is the main driver behind the market moves at the moment combined by the upcoming election in the US. In the long run, the much-awaited stimulus package will be approved and it is widely expected that the USD will retrace back with the extreme amount of cash injection into the markets. Therefore, precious metal investors must be a bit more patient for the expected rally using each retracement as a buying opportunity. On the physical demand side, Solar energy is expected to lead the growth of renewable energy over the next decade, with PV installations increasing by an average of 13% a year and meeting almost one-third of electricity demand growth out to 2030 (source: IEA). Unless a new technology is able to replace Silver usage in PV panels, Silver demand will likely to increase. 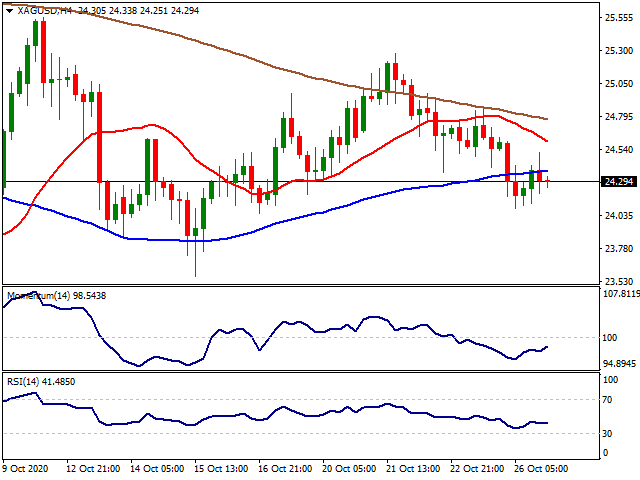 WTI faced another massive sell-off on Monday pressured by the second wave in the US and Europe combined with the incline seen in production from Libya. After the latest clashes in Libya, an agreement between the government and the rebels made oil production back on track causing an uncontrolled oil supply into the markets. On the other hand, EU countries started to re-impose some of the lockdown measures which triggered demand worries. 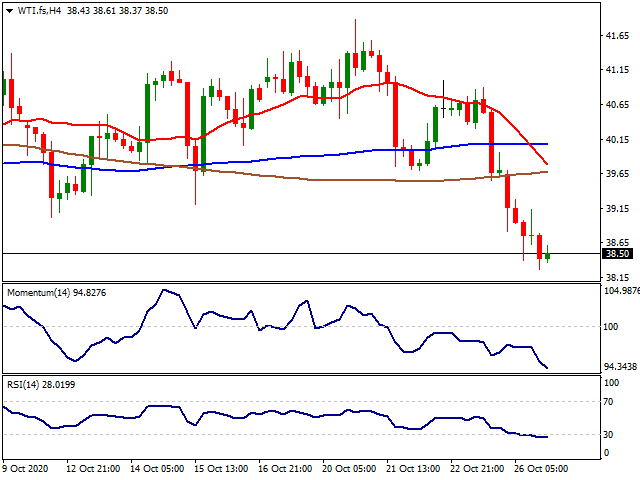 Stimulus uncertainty, upcoming elections in the US sparked the sell-off on Monday which wiped-off all the gains made in October for Dow Jones. As reported by Reuters on Monday, more compromises would be needed to reach a deal on coronavirus relief  White House economic adviser Larry Kudlow told CNBC in an interview. Also, US President Donald Trump's administration is refusing to accept Democrats' testing plan as part of the coronavirus relief bill, House Speaker Nancy Pelosi said on Monday, as reported by Reuters. According to several news outlets, sides haven't been able to make enough progress to reach an agreement and Pelosi is expected to talk to Treasury Secretary Steven Mnuchin around 1800 GMT on Monday. On the other hand, the extreme rise seen in the coronavirus cases forced most of the European countries to re-impose some of the lockdown measures while some states in the US started to discuss the same measures with an open voice. Data wise, New Home Sales in the US declined by 3.5% in September to a seasonally adjusted annual rate of 959,000, the data published jointly by the US Census Bureau and the Department of Housing and Urban Development showed on Monday. 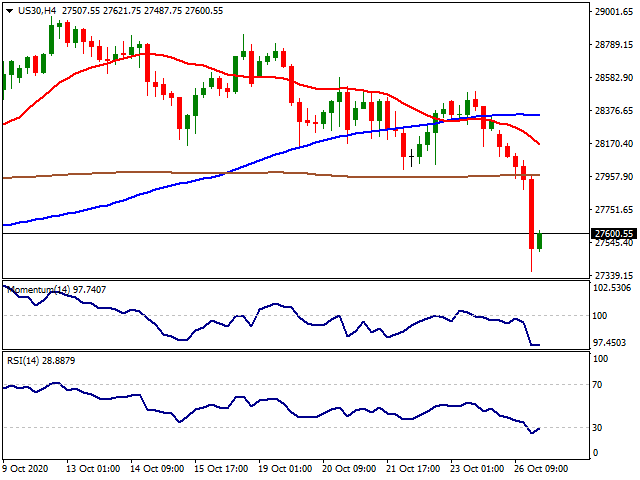