Dull trading across the FX board extended this Tuesday, with EUR/USD trading uneventfully for a fifth consecutive day. The pair fell to 1.1795, from where it quickly bounced towards the 1.1820/30 price zone, where it spent most of the American session. Investors ignored macroeconomic releases, but instead hold their breath ahead of the first-tier event scheduled for next week, which includes the US presidential election, preliminary estimates of Q3 GDP and several central banks’ decisions on monetary policy.

Meanwhile, speculative interest seems to have finally realized that there won’t be a deal on a stimulus package ahead of the election. Also, and further denting the market’s mood, the WHO said that Europe is now the epicenter of the pandemic. Data wise, news were mixed, as US Consumer Confidence contracted to 100.9 from a downwardly revised 101.9, according to CB. However, Durable Goods Orders in the country jumped 1.9% in September, largely surpassing the 0.5% expected. The macroeconomic calendar for the EU and the US will be quite scarce this Wednesday, with no relevant figures scheduled.

The  EUR/USD pair trades around 1.1810, little changed ever since the week started, The 4-hour chart shows that the pair is neutral-to-bearish, as technical indicators turned modestly lower around their midlines. The price is currently retreating from a flat 20 SMA while holding above the larger ones. Bull could have better chances on a break above 1.1870, an immediate resistance level, although a bullish continuation will be clearer once the pair moves above 1.1915. 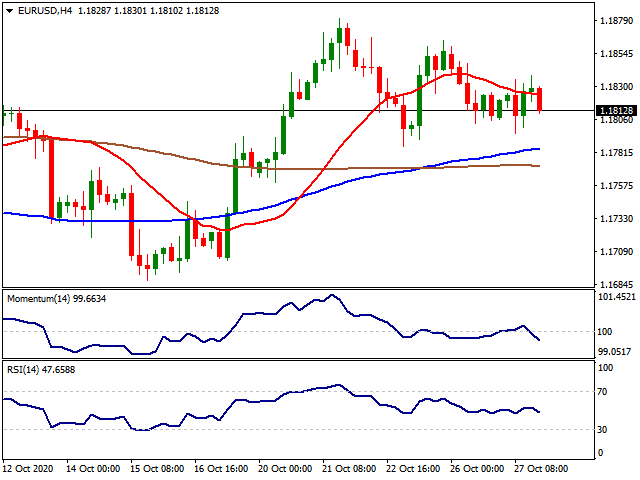 The USD/JPY pair is ending Tuesday with losses, a few pips above its monthly low of 104.33. Speculative index kept selling the greenback as the US presidential election looms and political tensions mount in the country. Adding to the bearish case, global indexes spent the day under pressure on the back of resurgent coronavirus outbreaks, while US Treasury yields were also under pressure falling for a third consecutive day. The Japanese macroeconomic calendar had nothing to offer this Tuesday and will remain empty this Wednesday.

The  USD/JPY pair is bearish in the short-term, and will likely extend its decline on a break below 104.30, the immediate support level. The 4-hour chart shows that it has broken below its 20 SMA, which is slowly grinding lower below the larger ones. The Momentum indicator in the mentioned time frame holds within negative levels while the RSI indicator is bouncing just modestly from oversold readings, with no signs of extending its advance. 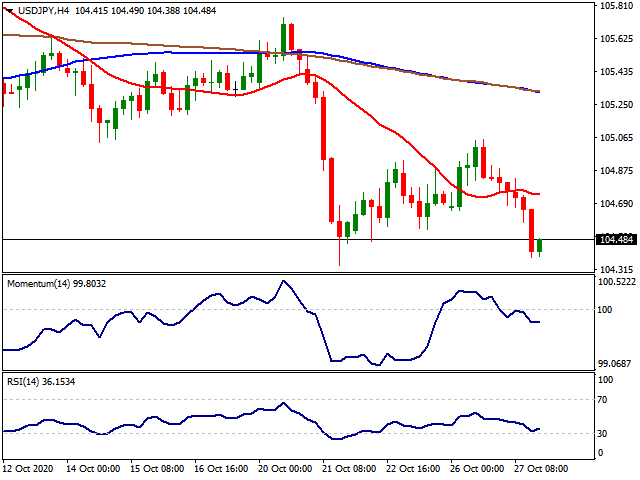 The GBP/USD pair advanced to 1.3079 a weekly high, trading a handful of pips below the level as the American session came to an end. The dollar came under selling pressure during US trading hours, after a consumer confidence indicator came in worse than anticipated, putting Wall Street under pressure and hence, the greenback.  US indexes, however, managed to move away from daily lows, ending the day mixed.

The UK published the Confederation of British Industry Distributive Trades Survey on realized sales, that fell in October to -23 from 11 in the previous month, also below the expected 1. It was the lowest reading since last June. Meanwhile, the UK reported over 22K new coronavirus cases, the highest one-day increase. Despite its resilient behavior the pound may soon give up. Progress in Brexit talks, on the other hand, could boost the pair. This Wednesday, the UK will publish the BRC Shop Price Index for September.

From a technical point of view, the GBP/USD pair is neutral-to-bearish in the near-term. The 4-hour chart shows that the pair got to settle above all of its moving averages, although the Momentum indicator is retreating modestly from near its midline. The RSI indicator, in the meantime, is holding above its midline but losing upward strength. Below 1.2980 the pair will likely be in the hands of bears, who will try to push it sub-1.2900. 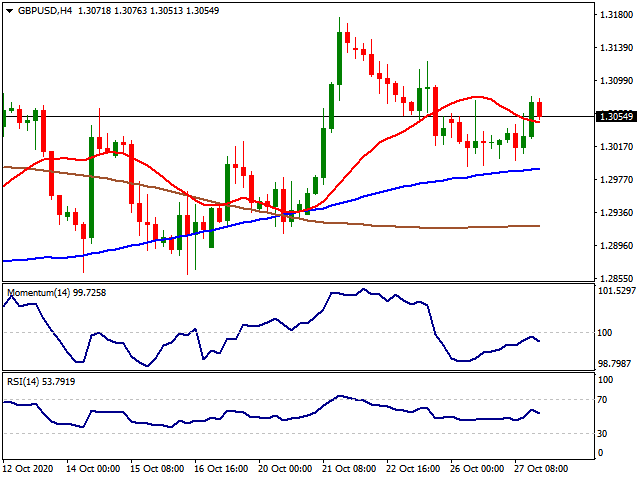 The AUD/USD pair has posted modest gains this Tuesday, trading ahead of the Asian opening around 0.7140. The modest advance could be attributed to persistent dollar’s weakness, which helped its major rivals hold ground. Gold posted a modest intraday advance, while US equities closed mixed and not far away from their opening levels. The bullish potential, in the meantime, is being limited by the latest RBA Meeting’s Minutes, which suggested that policymakers will cut rates in their next meeting.

Australia will release Q3 inflation figures this Wednesday.  The quarterly CPI is expected at 1.5%, quite a recovery from the previous -1.9%. When compared to a year early, it is expected to recover from -0.3% to 0.7%. The Trimmed Mean CPI from the Reserve Bank of Australia is expected at 0.3% QoQ from -0.1%, and at 1.1% YoY from 1.2% in Q2. A significant improvement expected that anyway falls short of RBA’s 2-3% target band.

The  AUD/USD pair retains a neutral stance in the near term, as it remains below the 0.7200 figure. The 4-hour chart shows that technical indicators continue to lack directional strength, with the Momentum stuck around its midline and the RSI within positive levels. The price is above the 20 and 100 SMAs but would need to advance at least above 0.7170 to become more attractive to bulls. 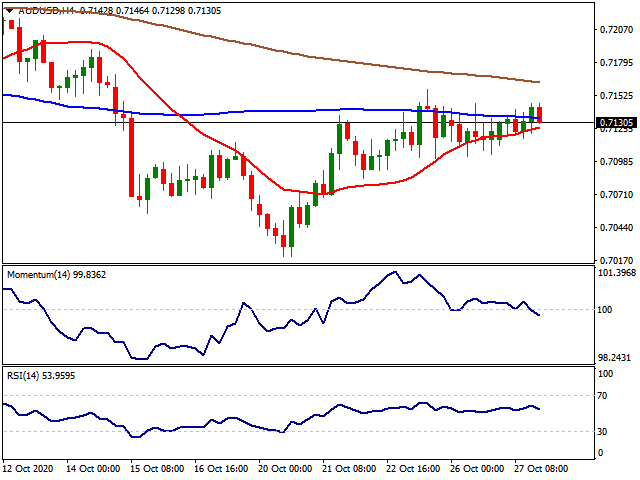 Gold is keeping its directionless trading on Tuesday as the markets are positioning themselves before the elections in the US. Apart from the stimulus talks, elections in the US and the second wave in the pandemic, a potential sale of US missiles to Taiwan fueled the risk aversion on Tuesday. The USD index DXY slid back below the 93.00 level again while the US 10-year yield kept its steady decline testing 0.77. At this point, while a stimulus package is granted after the elections, the level of the aid will give direction to the USD and precious metals. Therefore, the composition in congress after the elections will play a key role although Biden is holding his lead due to the latest polls. 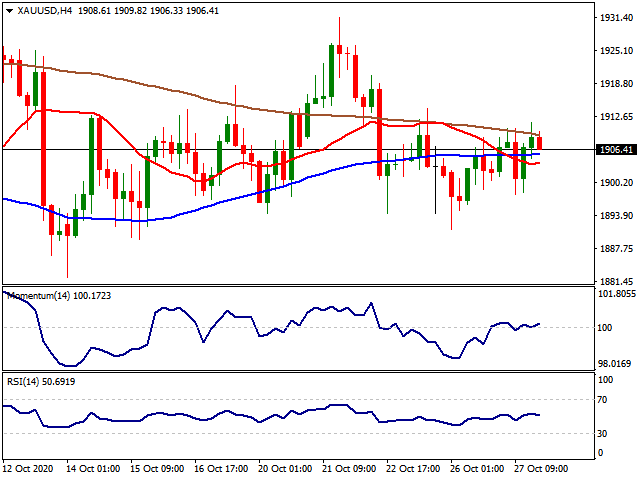 While Gold managed to capitalise the marginal decline seen in the USD, Silver stayed in the negative zone consolidating in a tight range before the critical elections in the US. The least precious metal is highly driven by the USD while Covid-19 pandemic shadowed its industrial demand driver. According to the World Silver Institute, 56% of silver demand comes from industrial fabrication, which includes everything from electrical, electronics, brazing alloys, solders, photovoltaic, and other industrial applications. Due to lockdowns since March, both production and mining activities are muted and demand for the physical Silver narrowed. Therefore, the post-pandemic normalized global economy will likely create extra demand for Silver. 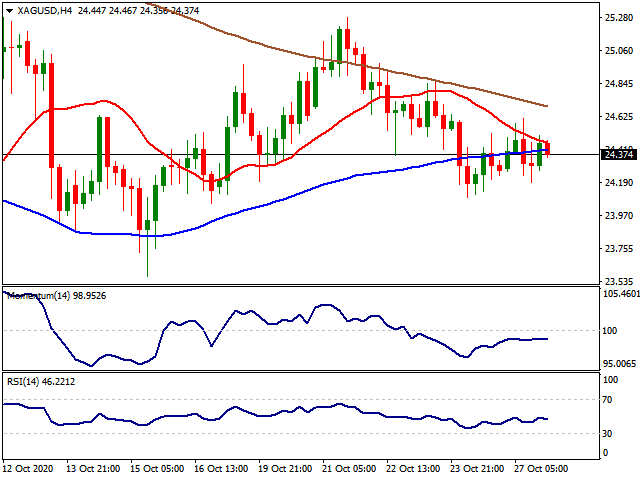 WTI managed to gain ground on Tuesday as the approaching storm forced some companies to shut down their production facilities in the Gulf of Mexico. On the other hand, the second wave in the pandemic sparked demand worries and the incline seen in supply due to Libyan supply limited the gains failing to re-test $40.00 level. Libya keeps increasing its crude oil production and exports after the country recently lifted the force majeure on the Sharara and the El-Feel oilfields. At this point, possible OPEC+ decision to postpone its planned increment of oil output as soon as in early 2021 will play a key role in the crude pricing. 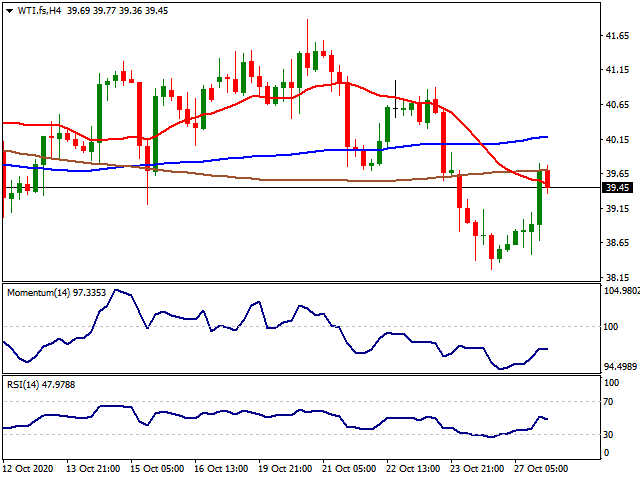 Dow Jones started the day with a bearish gap reflecting the cautious mood and flight to safety in the eve of the elections next week. The stimulus package dilemma still continues as Reuters reported White House economic adviser Larry Kudlow said talks between the Trump administration and House Democrats over another wave of COVID-19 aid were set to continue on Monday as both sides struggled to find a compromise one week before the Nov. 3 election.   Kudlow, speaking to reporters at the White House, said U.S. Treasury Secretary Steven Mnuchin would be in touch with the heads of relevant congressional committee chairs, but that there were still several areas of disagreement. At this point, a deal before the election looks not possible and the composition of Congress will determine the size and coverage of the aid package. Around 60 million Americans have voted in a record-breaking early turnout as Trump and Democratic challenger Joe Biden entered their final week of campaigning. On the data side, Durable goods orders increased by 1.9% in September after rising 0.4% in August. Durable goods orders were driven by a 4.1% rebound in orders for transportation equipment, which followed a 0.9% decline in August. Orders for motor vehicles and parts recovered 1.5% after falling 4.1% in August. Orders for non-defence capital goods excluding aircraft, increased 1.0% last month. Data for August was revised higher to show these so-called core capital goods orders increasing 2.1% instead of 1.9% as previously estimated. Expectations were for core capital goods orders to increase by 0.5%. 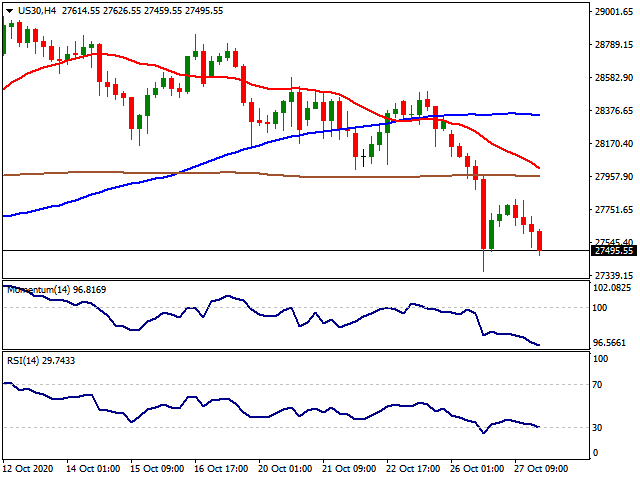