Financial markets gyrated once again around the US election’s headlines, as Joe Biden moved closer to win the election, and US President Donald Trump announced his party would legally challenge several states’ results, claiming fraud. Stock kept roaring higher despite the turmoil, with US indexes adding over 2% each intraday. The dollar fell across the board, and EUR/USD hit 1.1859, easing from the high in US trading hours, although retaining substantial gains.

Macroeconomic data remained in the background, ignored. Nevertheless, Germany published September Factory Orders, which were up 0.5% MoM, missing the market’s expectations. The EU released September Retail Sales, which were down 2% in the month, worse than anticipated. As for the US, it offered Initial Jobless Claims, which rise by 751K, worse than the 732K expected. Challenger Job Cuts in October decreased to 80.666K. Nonfarm Productivity advanced 4.9% in Q3, slightly worse than anticipated.

Also, the US Federal Reserve made its monthly monetary policy announcement, keeping rates on hold as widely anticipating. The Minutes were slightly more optimistic than the previous ones, although there was no significant change. Once again, Powell called for fiscal stimulus, which added pressure on the greenback. This Friday, the US will publish October employment figures. The Nonfarm Payroll report is expected to show that the economy added 600K positions, while the unemployment rate is foreseen declining from 7.9% to 7.7%.

The EUR/USD pair is trading at the upper end of its daily range around 1.1820, maintaining its bullish bias. The 4-hour chart shows that it has broken above all of its moving averages, with the 20 SMA advancing, although below the larger ones. Technical indicators remain well into positive territory after correcting overbought conditions. The 1.1870 level is the immediate resistance level, with the pair poised to break above 1.1900 once above it. Bulls are defending the downside around 1.1790. 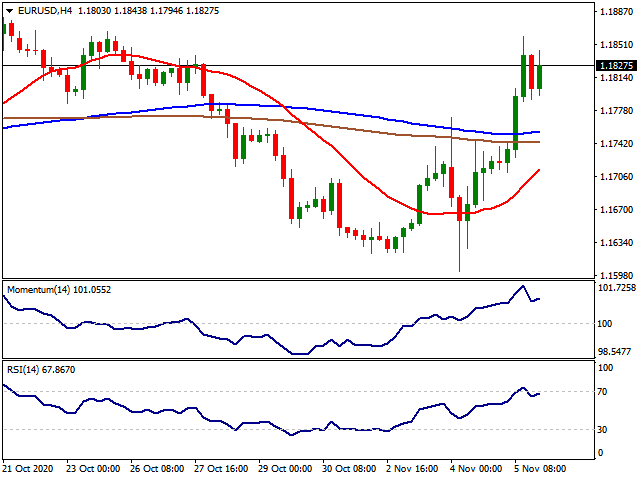 The USD/JPY pair plummeted to 103.43 its lowest since last March, after triggering stops just below the 104.00 figure. The pair fell despite a risk-on environment, with equities rallying and government bond yields recovering ground. Treasury yields held on to modest gains after the US Federal Reserve kept its monetary policy unchanged, as expected. USD/JPY, however, extended its daily decline by a few pips with Fed’s chair words.

Japan published at the beginning of the day the October Jibun Bank Services PMI, which came in at 47.7. The country will publish September Labor Cash Earnings this Friday, foreseen at -2.2% YoY, and Overall Household Spending for the same month, expected to have fallen by 10.7% compared to a year earlier.

The USD/JPY pair is pressuring its daily lows, firmly bearish despite being oversold in the near-term. The 4-hour chart shows that it has extended its decline below all of its moving averages, with the 20 SMA accelerating south below the larger ones. Technical indicators, in the meantime, turned lower after a modest corrective advance, supporting another leg south for the upcoming sessions. The next relevant support is 103.07, the low set on March 12. 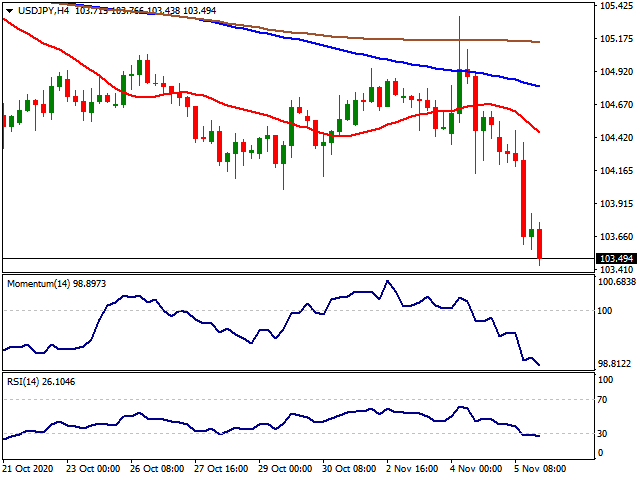 The broad dollar’s weakness pushed GBP/USD to 1.3148 a fresh weekly high, with the pound finding support also in the BOE. The Bank of England boosted its quantitative easing program by £150bn to a total of £895 billion while keeping rates at a record low of 0.1%. Speculative interest considered the possibility of negative rates and a smaller expansion of the APP, with the UK currency rallying then on relief.

Additionally, given that the UK is entering a fresh one-month lockdown, Finance Minister Rishi Sunak announced that the government extended the furlough scheme until March, funding it through short-term borrowing. The UK won’t release relevant data this Friday.

The GBP/USD pair is heading into the Asian opening trading around the mentioned high. The 4-hour chart shows that the pair is currently developing far above its moving averages, and with the 20 SMA crossing above the 100 SMA, both around 1.3000. The Momentum indicator corrected extreme overbought readings before resuming its advance while the RSI keeps advancing, now near the 70 level supporting further gains coming, particularly if the pair advances beyond the mentioned daily high. 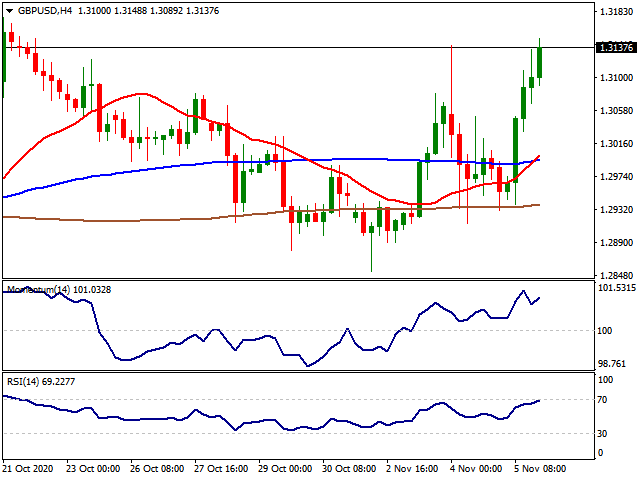 The Australian dollar kept rallying against its American rival, with the pair rallying past October monthly high and reached 0.7288, its highest since last September. Substantial gains in Wall Street and the broad dollar’s sell-off kept pushing the pair higher throughout the day, further underpinned by Fed’s monetary policy announcement.

Australia published the September Trade Balance, which posted a surplus of 5630M in September, although the August surplus was downwardly revised to 2618M. Imports declined by 5.9% in the month, while exports increased by 3.9%. Early on Friday, the Reserve Bank of Australia will release its Monetary Policy Statement.

The AUD/USD pair holds on to intraday gains, bullish despite overbought in the near term. The latest advance has left the pair over 100 pips above a bullish 20 SMA, which has crossed above the larger ones almost vertically. The RSI indicator maintains its bullish slope at 75, while the Momentum indicator resumed its advance after a modest downward corrective movement. Should the pair advance beyond 0.7300, chances are of a test of the year high at 0.7413 in the following sessions. Bullish pressure may ease on a slide below 0.7240, the immediate support. 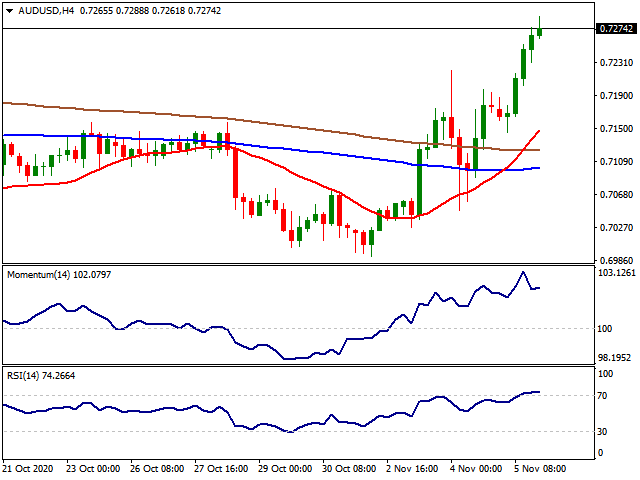 Gold rallied a massive $50.00 on a daily basis as Biden headed for a win in the US. As the democrat candidate is now close to victory, the USD index DXY faced selling pressure and slipped to sub-93.00 on Thursday. It is most likely that Biden will win the presidency while the congress will be split between the Democrats and the Republicans. However, the Democrats still have a small chance to gain the majority in the congress which will lead to a bigger stimulus package with more liquidity. With this expectation, the USD stayed under pressure and precious metals and equity markets rallied carrying Gold to its highest level since late September. On the other hand, as expected the FED did not make any change in its monetary policy. After the rate decision, Powell stated that the election is not FED’s focus and they still have ammo including ways to adjust asset purchase programs. 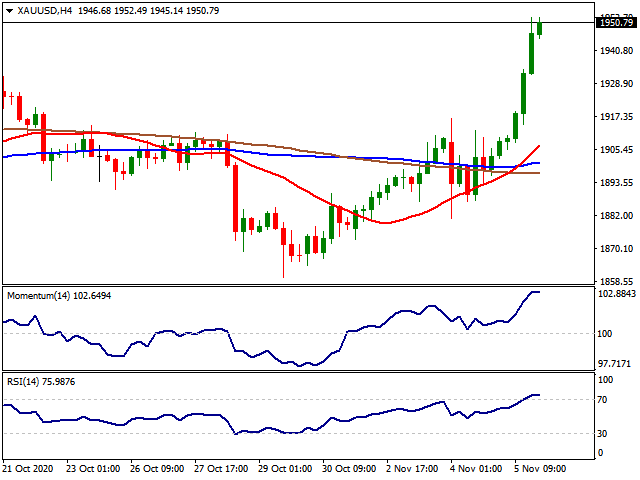 Silver also rallied on Thursday as the election outcome became more clear. As the democrat candidate, Biden is close to winning the presidency, there is also a small chance of a democrat dominant congress. Therefore, the USD index DXY fell heavily in case of a bigger stimulus deal supported by the democrats. As seen lately during precious metal rallies, Silver outperform Gold and Gold to Silver ratio tested sub-77.00 levels. At this point, the election in the US is solely driving the markets despite the gloomy look in the coronavirus pandemic. Therefore, as the USD weakness is expected to continue, Silver might find extra support during the post-pandemic period as the industrial production activity normalises. 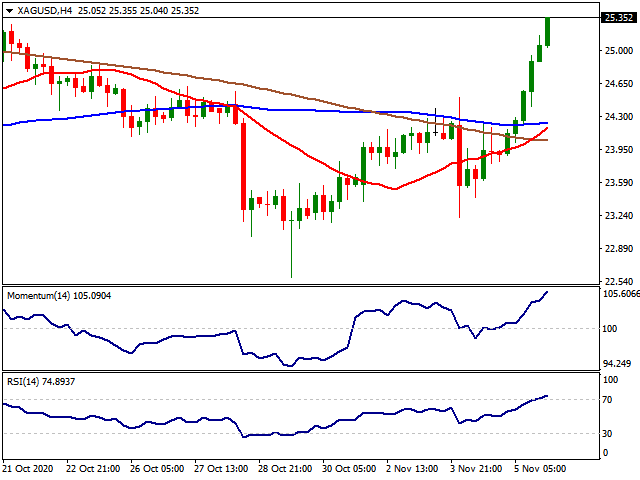 WTI faced a correction downside on Thursday after three consecutive days of incline despite the heavy sell-off seen in the USD. The latest rally was supported by the larger-than-expected drops in stocks shown by API and EIA data sets despite the demand fears caused by the second wave of the coronavirus pandemic. Also, it is expected that the OPEC+ could extend into the next year the current oil output cuts. The cartel is expected to shed more details on this at its next 2-day meeting on November 30. 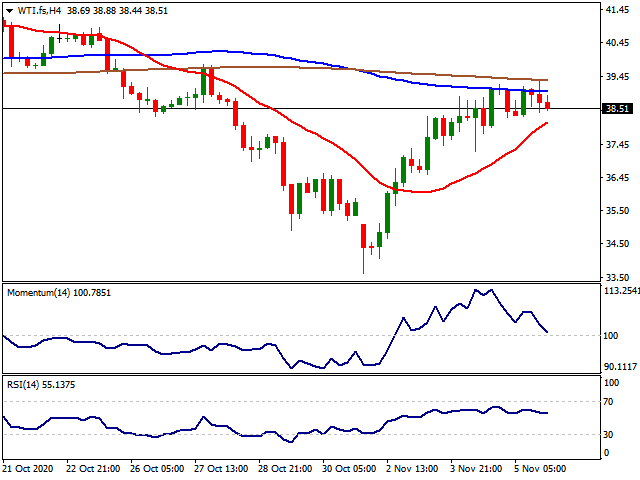 Dow Jones extended its impressive rally to a urth-consecutive trading day as the Democrat win is getting closer in the US. The index once again started the day with a bullish gap supported by the expected Biden’s win for the presidency and a divided Congress which might also be controlled by the Democrats. The size of the expected stimulus deal might be bigger with a Democrat-controlled Congress, therefore, the USD stayed under heavy selling pressure while the risk appetite carried the US indexes higher.

As the counting continues, Georgia has provided an update about pending votes. There are around 60,000 ballots left to count and officials are working to publish the results as soon as possible, according to officials. The southern state is one of a handful of states that could tip the election in favour of either President Donald Trump or rival Joe Biden. The incumbent is leading the Peach State by roughly 18,000 votes or 0.4%. According to local law, the parties can request a recount if the gap is under 0.5%.

Apart from the election, FED kept it’s “whatever it takes” statement to support the markets leaving the policy rates unchanged as expected. Powell stated in his speech after that decision that the US election is not in their focus adding that the Fed still has ammo, including ways to adjust asset purchase programs. 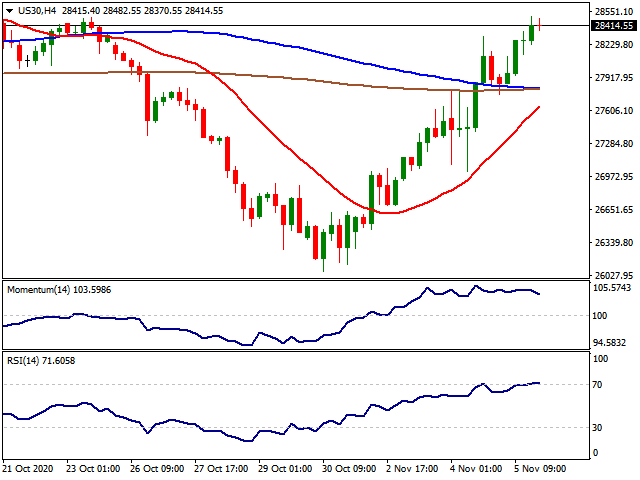