The EUR/USD pair kept rallying on Wednesday, reaching a fresh 2020 high of 1.2108. The common currency was among the best performers in a market led by sentiment. Hopes that the US Congress would resume negotiating a COVID-19 stimulus package, alongside Pfizer’s vaccine authorization in the UK, fueled investors´ mood. Brexit headlines, on the other hand, put a break to equities´ rally during the London session, which closed mixed.

Wall Street managed to bounce off daily lows, in spite of soft US data, supporting EUR/USD. The US published the November ADP survey on private job creation. According to it, private payrolls rose by 307K, below the 410K expected and the previous 365K. Earlier in the day, Germany published October Retail Sales, which surprised to the upside, surging 2.6% MoM and 8.2% YoY. The EU released the October Producer Price Index, which beat expectations rising by 0.4% in the month.

This Thursday, Markit will publish the final versions of its Services PMIs for the EU and the US. The Union will report October Retail Sales, while in the US, the focus will be on employment-related data and the official ISM Services PMI, expected at 56 from 56.6 in the previous month.

The EUR/USD pair is trading near the 1.2100 figure, maintaining its bullish tone. The dollar is oversold, and a corrective recovery can’t be ruled out. Technically, the 4-hour chart indicates that there’s room for additional gains, as the pair further advanced above all of its moving averages, with the 20 SMA heading firmly north around 1.2010. Technical indicators have stabilized, the Momentum within positive levels and the RSI at 75, without signaling bullish exhaustion. 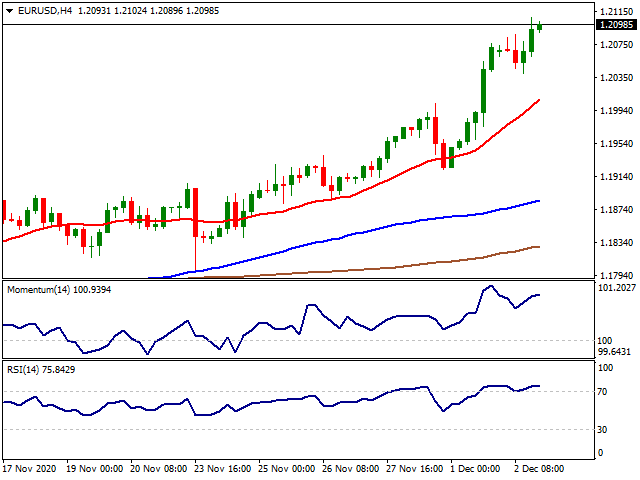 The USD/JPY pair peaked at 104.74, its highest in over a week, underpinned by coronavirus vaccine hopes and renewed talks about a US stimulus package. The rally stalled after softer than expected US employment-related figures, as the ADP report came in at 307K below the expected 410K. The Wall Street’s tepid tone also capped advances, although the pair is ending the day with modest gains around the 104.50 price zone.

Japan published at the beginning of the day the November Monetary Base, which improved by less than anticipated, up by 16.5% YoY. Consumer Confidence in the same month, however, surprised to the upside, improving to 33.7 from 33.6 against an expected drop to 29. This Thursday, the country will release the November Jibun Bank Services PMI, previously at 47.7.

The USD/JPY pair temporarily traded above its 200 SMA in the 4-hour chart but is back below it. The 20 SMA and the 100 SMA remain directionless below the current level but close enough to indicate the absence of directional strength. In the mentioned chart, technical indicators have retreated from their intraday highs but hold within positive levels, signaling limited selling interest. A critical resistance comes at around 105.30, where the pair has a daily descendant trend line coming from March’s monthly high. 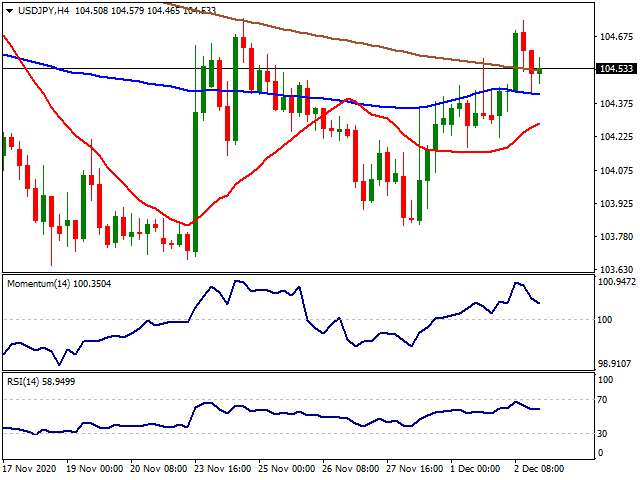 The GBP/USD pair tumbled to 1.3287, a fresh weekly low, as the Brexit drama continues. EU chief Brexit negotiator Michel Barnier warned the UK that a deal must be reached before the end of this week. “A deal hangs in the balance,” he added as negotiating teams have been locked in the last few days amid divergences about fisheries and a level playing field. It has been 1,623 days since the Brexit referendum and there are just 29 days left for leaders to clinch a deal. The GBP/USD pair recovered to the current 1.3350 price zone during US trading hours, amid the persistent dollar’s weakness.

The UK macroeconomic calendar is quite scarce this week. The kingdom published the October BRC Shop Price Index, which resulted in -1.8% from -1.2% in the previous month. On Thursday, Markit will release the final November Services PMI, expected to be confirmed at 45.8.

The GBP/USD pair is neutral in the near-term, still dependent on Brexit headlines. The 4-hour chart shows that the price is struggling around a directionless 20 SMA after meeting buyers around a bullish 100 SMA, currently at 1.3280. In the meantime, technical indicators lack clear directional strength around their midlines. The bearish case will gain followers on a break below the mentioned 100 SMA. 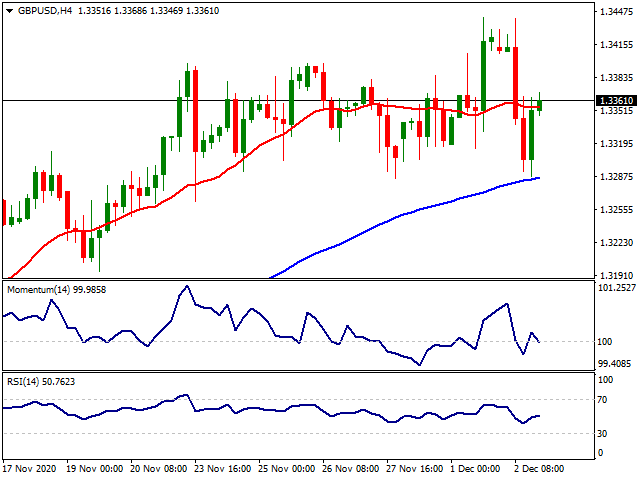 The AUD/USD pair is modestly up for a second consecutive day, hovering around the 0.7400 level. The aussie advanced following the release of the Q3 Gross Domestic Product, which improved to 3.3%, indicating that Australia is officially out of recession. Even further, the country has not reported new coronavirus cases for three consecutive days. The pair retreated to 0.7350 as the dollar found some demand during European trading hours but resumed its advance ahead of the daily close. The AUD found additional support in a gold’s comeback, as the bright metal surged past $1,830.00 a troy ounce, setting near its daily high.

This Thursday, Australia will publish the final Commonwealth Bank Services PMI, foreseen at 54.9, and the Composite PMI, expected at 54.7. Later into the Asian session, the country will release the October Trade Balance and Home Loans for the same month.

The AUD/USD pair is trading at the upper end of its latest range, still neutral in the near-term, although with increasing bullish potential. In the 4-hour chart, the pair spent the day seesawing around a flat 20 SMA to settle above it. Technical indicators recovered into positive levels but lack directional momentum. Bulls need to clear this year’s high at 0.7413 for the pair to accelerate north and approach the 0.7500 threshold. 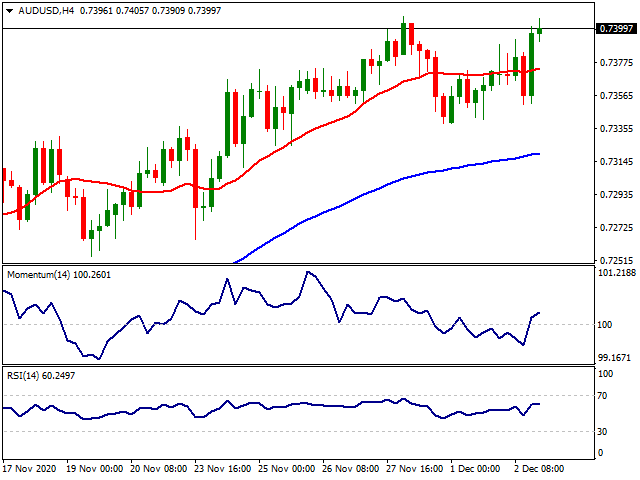 Gold continued to recover as the USD index DXY kept its move down. Fresh stimulus news and worse than expected US ADP data pressured the USD on Wednesday while positive developments about the Covid-19 vaccine kept supporting the risk appetite. The US Congress has revived the need for a stimulus package, although the news came from a group of bipartisan lawmakers, without leaders’ involvement at the time being. US Treasury Secretary Steve Mnuchin also mentioned the need to resume COVID-19 relief talks in his testimony before the Senate. Employment in the US' private sector increased by 307,000 in November, the monthly data published by the Automatic Data Processing (ADP) Research Institute revealed on Wednesday. This reading followed October's increase of 404,000 (revised from 365,000) and missed the market expectation of 410,000. The data reading is a result of the second wave of the pandemic in the US as lockdown measures are re-imposed lately. On the other hand, the UK approved the Pfizer´s vaccine emergency use and will shortly start applying it. As long as worse than expected labour data readings continue in the US, Congress will feel more pressure to have a deal on the stimulus deal. Therefore, precious metals will most likely find support in the coming term. 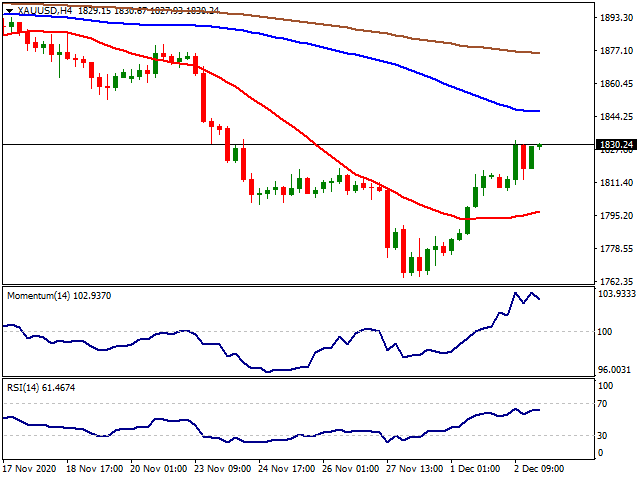 Silver was a bit reluctant to move up on Wednesday while Gold had a solid bullish run. Gold to Silver ratio lifted over to 76.00 level due to the poor performance of Silver as the white metal failed to capitalise the decline seen in the USD. Precious metals are usually used by the central banks as an inflation hedge. Also, historically low-interest rates are weakening the USD and other currencies. Apart from the volatile bullish runs fueled by the vaccine news, in the long run, precious metals will find extra demand supported by the monetary policy conditions. 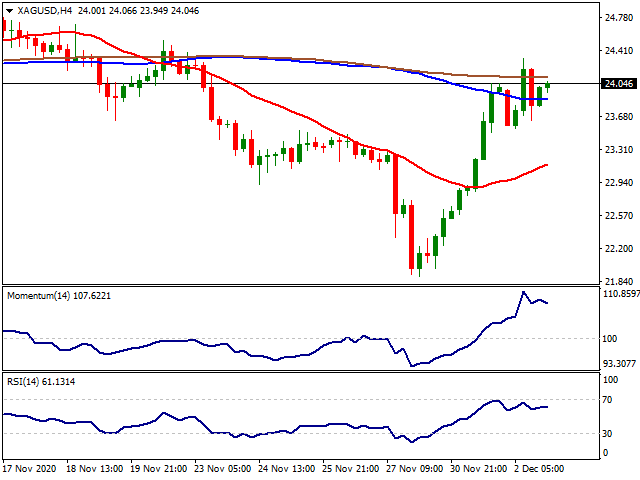 After two consecutive sessions with a decline, WTI managed to gain traction despite the surprise build in the US oil inventories. The US oil inventories rose 4.146 million barrels in the week ended Nov. 27, the American Petroleum Institute (API) data showed on Tuesday. Analysts had projected an inventory draw of 2.358 million barrels for the week. The API reported a bigger-than-expected oil inventory of 3.8 million barrels in the preceding week. On the other hand, OPEC+ failed to reach an agreement and scheduled another meeting today. Both negative developments failed to sustain the bullish move seen in WTI as the black gold tested over $45.00. 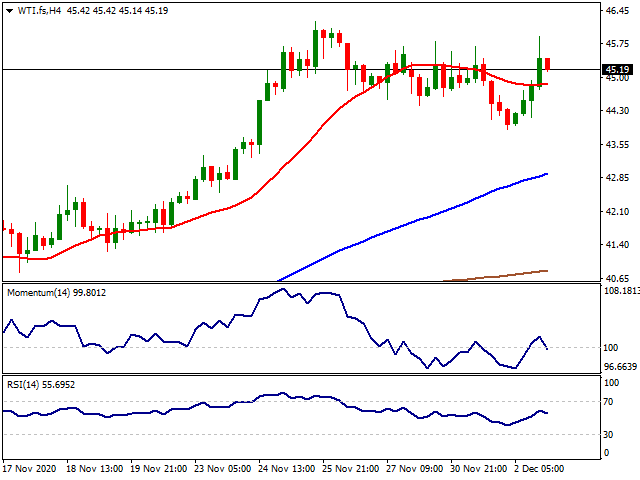 Despite the retracement seen at the end of the session on Tuesday’s trading, Dow Jones managed to keep its positive mood close to 30,000 levels on Wednesday. The ADP data reading showed a net decline in the labour market. Employment in the US' private sector increased by 307,000 in November due to the monthly data published by the Automatic Data Processing (ADP) Research Institute revealed on Wednesday. The market expectation was at 410,000 level. The USD index DXY kept its back foot around 91.00 levels while the US 10-year yield kept its rally through 0.95% levels. The data might be an indicator of the NFP data reading on Friday as the markets are gearing up for a negative reading in the headline data. On the other hand, it is reported that House Speaker Nancy Pelosi and Treasury Secretary Steven Mnuchin will restart negotiations over a new stimulus package proposed by members of both parties. The relief is worth $908 billion and includes support for small businesses, unemployed, and airlines, among others. On the vaccine side, the US pharma giant Pfizer and its partner BioNTech applied for emergency approval of their COVID-19 vaccine candidate from the European regulator. Previously, Moderna did the same for its coronavirus vaccine that also relies on the mRNA technology, which has never been used before. The European Medicines Agency revealed that it could conclude its assessment of Pfizer and Moderna’s vaccines by December 29 and January 12, respectively. 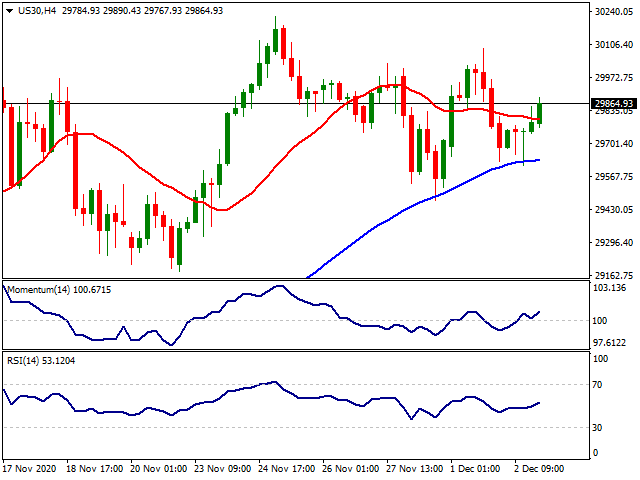