The American dollar finished the week with a firm note against its major rivals, with EUR/USD bottoming at 1.2061 and closing the week in the red a handful of pips above this last. The greenback appreciated despite US Treasury yields retreated sharply. Stocks, on the other hand, persisted in their bearish route, with only the Nasdaq posting an intraday advance. Month-end flows are partially responsible for Friday’s movements.

The US published the preliminary estimate of the January Trade Balance, which posted a deficit of $83.7 billion, slightly better than the December one. Personal Income in the same month was up 10%, while Personal Spending rose just 2.4%. The final version of the February Michigan Consumer Sentiment Index came in at 76.8.

On Saturday, the US House of Representatives passed President Joe Biden's $1.9 trillion coronavirus relief package by 219-212 votes. Republican support was missing, but the bill moved to the Senate, where it is expected to pass before March 14, when the previous round of stimulus expires.

The macroeconomic calendar will include the final readings of Markit February Manufacturing PMIs for the EU and the US, while the latter will publish the official ISM report, foreseen at 58-9 from 58.7. Germany will publish the preliminary estimate of February inflation.

The EUR/USD pair is trading a few pips above the 38.2% retracement of its November/January rally. A clear break of the support level could see EUR/USD approaching February low at 1.1951. In the daily chart, the pair has settled below a directionless 20 SMA, while a bullish 100 SMA provides dynamic support around 1.2010. Technical indicators head sharply lower, supporting a bearish continuation, as the RSI already crossed into negative territory. The bearish potential is stronger in the near-term, as, in the 4-hour chart, as the pair is now below all of its moving averages, while technical indicators remain near oversold readings. 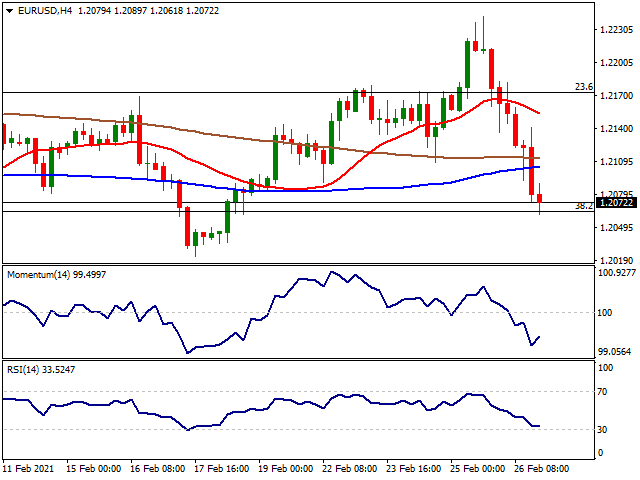 The USD/JPY pair reached 106.68 on Friday, a level that was last seen in August 2020, to close the week with gains in the 106.50 price zone. The dollar’s demand overshadowed a sharp decline in US Treasury yields ahead of the weekly close, as the yield on the benchmark 10-year Treasury note settled at 1.40% after peaking earlier in the week at 1.61%, a one-year high.

Japan published February Tokyo inflation data, with the headline figure printing at -0.3% YoY, as expected. The core reading, which excludes fresh food prices, also printed at -0.3% YoY. Industrial Production was up 4.2% MoM in January but contracted 5.3% compared to a year earlier. Finally, Construction Orders were up by 14.1% in January, although Housing Starts decreased by 3.1%. Japan will publish the February Jibun Bank Manufacturing PMI this Monday, previously at 50.6.

The USD/JPY pair is bullish, according to the daily chart, as technical indicators maintain their momentum upwards near overbought readings, as the pair develops above all of its moving averages. The 20 SMA has largely surpassed the 100 SMA and is about to cross above the 200 SMA. In the 4-hour chart, technical indicators retreat from overbought readings but hold well above their midlines, while the pair stands well above bullish moving averages. Further gains are likely, mainly if US government bond yields resume their advance. 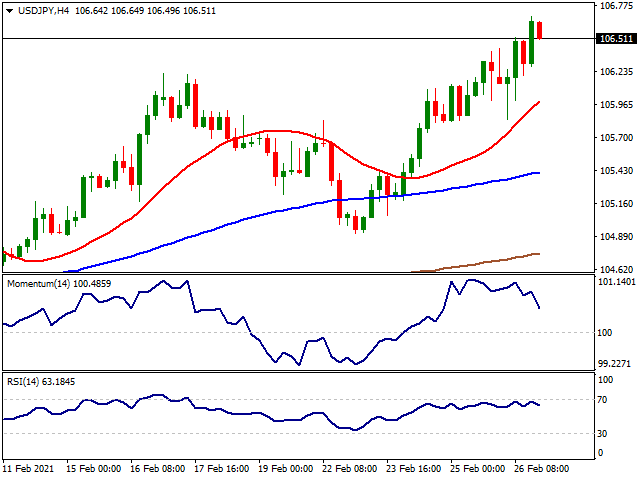 The GBP/USD pair fell for a second consecutive day, closing the week in the red at 1.3928. A scarce UK macroeconomic calendar favored the slump, as there were no reasons to buy the pound. The market has already priced in better progress in coronavirus immunization in the UK, which could be translated into a sooner economic comeback. Profit-taking on the last trading day of the month may have also taken its toll after the pair reached an almost three-year high mid-week.

Over the weekend, news pointed out that UK finance minister Rishi Sunak would announce this week 5 billion pounds of additional grants to help businesses hit by the pandemic in his budget statement next Wednesday. Markit will release the final reading of the UK Manufacturing PMI this Monday, foreseen at 54.9. The country will publish January money data, with Mortgage Approvals expected at 96K.

From a technical point of view, the GBP/USD pair is in a corrective decline. In the daily chart, the pair develops above bullish moving averages. The 20 SMA provides dynamic support at 1.3860, with a break below it opening the doors for a steeper decline. Technical indicators retreated sharply from overbought readings, maintaining their bearish slopes but within positive levels. In the 4-hour chart, the pair is developing below a bearish 20 SMA and just above a bullish 100 SMA. Technical indicators remain near oversold levels, the Momentum bouncing modestly, but the RSI maintaining its bearish slope. 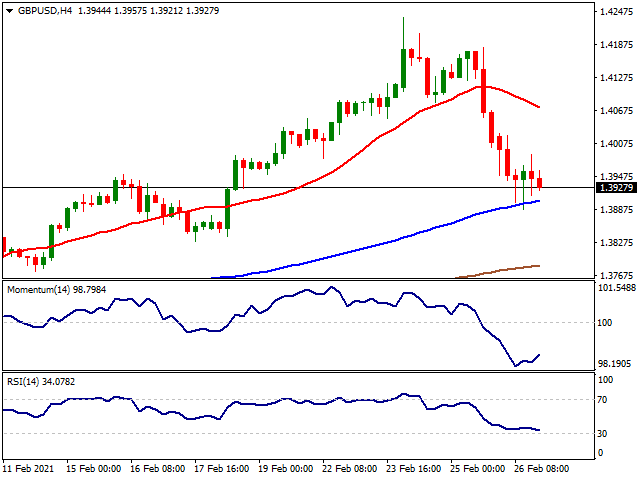 The AUD/USD pair plummeted on Friday to a fresh two-week low of 0.7691, closing the week a few pips above this last. Commodity-linked currencies were the worst performers at the end of the week, undermined by falling oil and gold prices, with the latter trading as low as $1,717.14 a troy ounce. Australian published on Friday, January Private Sector Credit, which rose 0.2% MoM and 1.7% YoY.

The AUD/USD pair is at risk of falling further, according to the daily chart, as the pair is below a flat 20 SMA, although well above bullish longer ones. Technical indicators retreated sharply from overbought readings, with the Momentum around its 100 level and the RSI at 45, both indicating further declines ahead. In the 4-hour chart, technical indicators pared their declines in extreme oversold readings, holding nearby and skewing the risk to the downside. Additionally, the pair is below all of its moving averages, with the 20 SMA accelerating south above the larger ones. 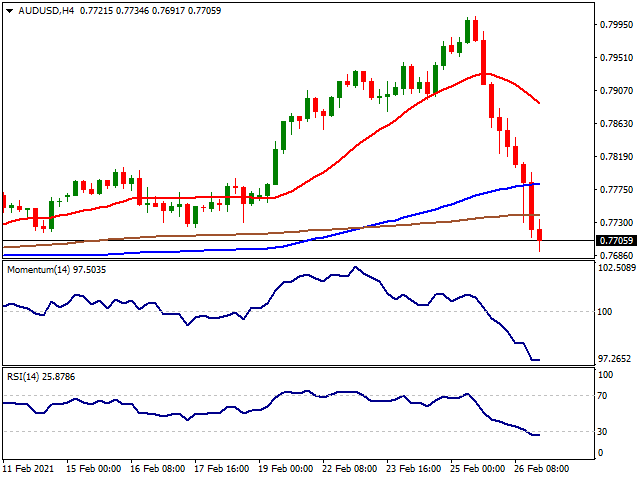 By comparison, silver is holding up better to US dollar strength than gold prices, with the gold to silver ratio moving sharply lower again on Friday within its broader bearish trend. With that being said, commodities are struggling with the CRB index moving discernibly away from the recent cycle highs and below prior support, ending Friday down by over 2%. However, surging interest rates weighing on risk appetite, despite a possible reversal in what might be classified as super cycle, precious metal’s correlation to industrials could come under pressure as investors move into safe-havens.

Meanwhile, the technical outlook for silver is currently corrective as the price heads towards a 38.2% Fibonacci retracement level at $26.9314. This area has proven to be strong demand throughout Feb business from where a downside continuation might be expected if it now acts as resistance. However, a deeper correction would target the old 24 Feb support and confluence with the 61.8% Fibonacci retracement level at $27.4227. 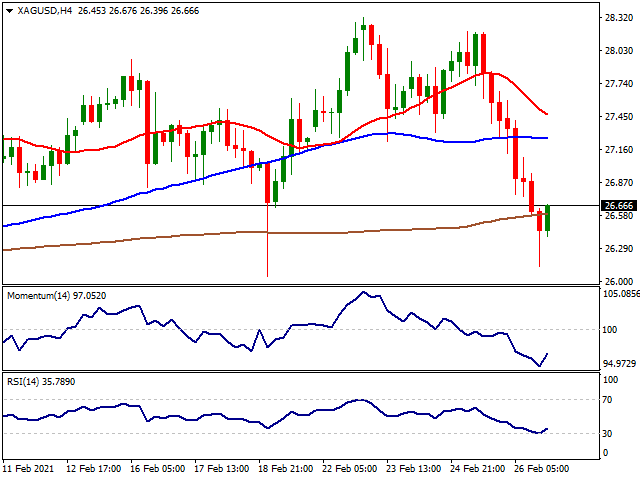 US stocks continued to suffer from the yield dynamic in increasingly volatile trading on Friday. Inflation jitters have knocked the major averages of their record highs. The  Dow Jones fell 1.5% lower to 30,932.37, also weighed down by drug makers as well as Salesforce.com (CRM), which fell 6% after projecting FY2022 earnings slightly below Wall Street estimates. As for other performers, the tech sector reclaimed some recently lost ground, while financials and energy gave back some of the recent territory made.

A plus for the market in the forthcoming week could come from the weekend news that the US House of Representatives passed President Joe Biden's $1.9 trillion coronavirus relief package with the bill now moving to the Senate where it is expected to pass before March 14. Of note, the last round of federal COVID-19 pandemic relief, disbursed last month, fueled a 10% month-over-month jump in US Personal Income for January, the Commerce Department reported Friday. There are bullish expectations for purchasing power to rise and wealth effects to make their way through into equity prices. Nonfarm payrolls will be a key driver in the week ahead as well. An improvement should help to buoy the market.

Technically, the price has plummeted through 21 Jan’s old highs and support to test the 50% mean reversion level of this year's range in Fridays low. A break here would open prospects to a 61.8% Fibonacci retracement confluence that meets the early Feb highs at 30,840. A trip to the upside, on the other hand, could face resistance around 31,400 old support. 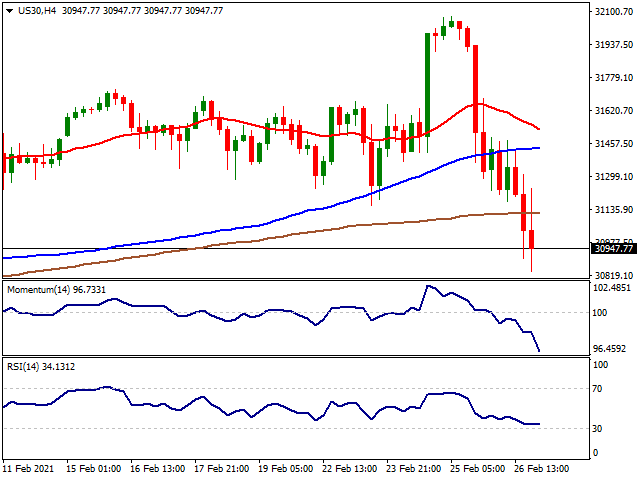 Recent market developments have led investors to price in earlier monetary tightening than the Federal Reserve and other central banks have signaled. US yield increases have accelerated this year while Fed officials refrain from expressing concern about the yield gains which is dictating the path of the greenback.

The benchmark 10-year Treasury yield sailed through 1.6% on Thursday for the first time in a year after a terrible seven-year note auction. It was last at 1.45%. Meanwhile, rates can still move higher. 1.45%-1.5% is extraordinarily low for the US 10-yield, and given an assessment of the relationship between the current levels, the dollar has further to go by historical deviations.

As for the week ahead, US Nonfarm Payrolls is going to be important.  More improvement could be seen from February as COVID restrictions are eased further but previous data has been much weaker over the last two months. The stock market needs a lifeline, otherwise gold could come back in to play as a favoured safe-haven. An eye will also be kept on high European covid rates which have already delayed France and Germany's easing.

Technically, following a -61.8% Fibonacci retracement of the prior daily correction, the price has settled in the lower end of the $1,700s where liquidity from April-June 2020 business would be expected to hold up the bears. A 50% mean reversion of the latest bearish impulse has a confluence with the prior 19 Feb lows which would be expected to act as resistance. 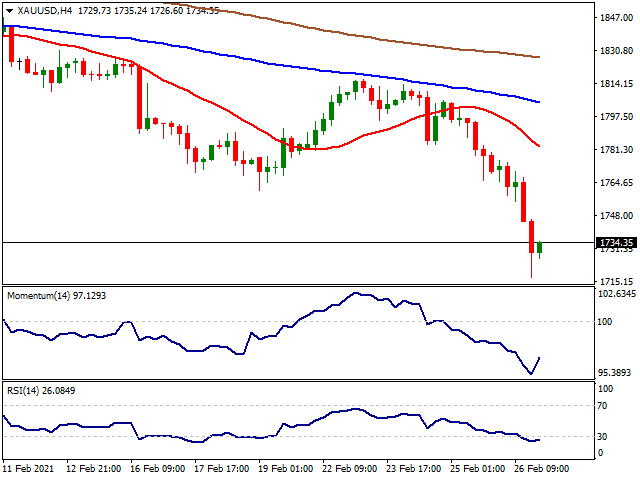 The steep rise in the US dollar has contributed to the fall in oil prices as has the move in US yields. However, investors are also betting that next week's meeting of the Organization of the Petroleum Exporting Countries (OPEC) and allies, a group known as OPEC+, will result in more supply returning to the market.

Given how high oil prices are, there is risk of a stronger correction from current levels on growing sentiment that the demand side of the market is nowhere close to warrant such levels. However, crude prices also face upside pressure from slower refinery demand. Several Gulf Coast facilities were shuttered during the winter storm last week and refining capacity of about 4 million barrels per day (bpd) remains shut with full capacity not expected to resume before 5 March.

Technically, while below $62.10, a steeper correction could be on the cards. A break of the lows that meets the 78.6% Fibonacci retracement of the prior daily bullish impulse candle, bears will have $58.88 on the radar. This is a level that resides in an old structure that would be expected to act as support on initial tests of the area. On the other hand, a break of the 25 Feb low, $62.67, will leave the bulls back in the driving seat to target the $65.00 psychological level. 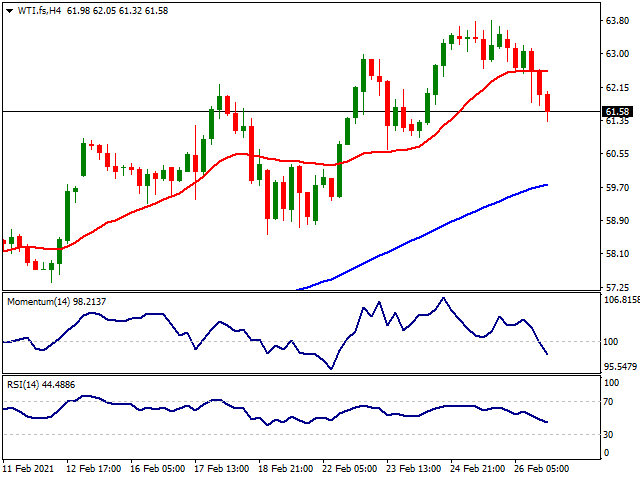