The EUR/USD pair bounced modestly on Friday to finish the week in the red at 1.1793. The dollar eased on the back of a better market mood that drove equities higher in the last two trading sessions of the week. Wall Street surged ahead of the close, with the three major US indexes settling near record highs, while government bond yields remained subdued.

European data was generally encouraging, as the March German IFO survey showed that Business Climate improved from  92.7 in February to 96.6. US data, on the other hand, was mixed, as February core PCE unexpectedly shrank to 1.4% from 1.5%, while Personal Income printed at -7.1% and Personal Spending at -1%. The March Michigan Consumer Sentiment Index was upwardly revised to 84.9.  Coronavirus concerns remained ignored by traders, with rising cases at both shores of the Atlantic.

The week will start with a light macroeconomic calendar, as the EU has no data scheduled, while the US will publish the March Dallas Fed Manufacturing Business Index.

The EUR/USD pair holds near its yearly low at 1.1761, and the daily chart suggests that further declines are still in the docket. The pair develops below all of its moving averages, with the 20 SMA maintaining its firm bearish slope. Technical indicators have bounced from oversold readings with uneven strength, suggesting a limited bullish momentum. The 4-hour chart shows that sellers surged on approaches to a bearish 20 SMA, currently around 1.1810, while technical indicators resumed their declines within negative levels. 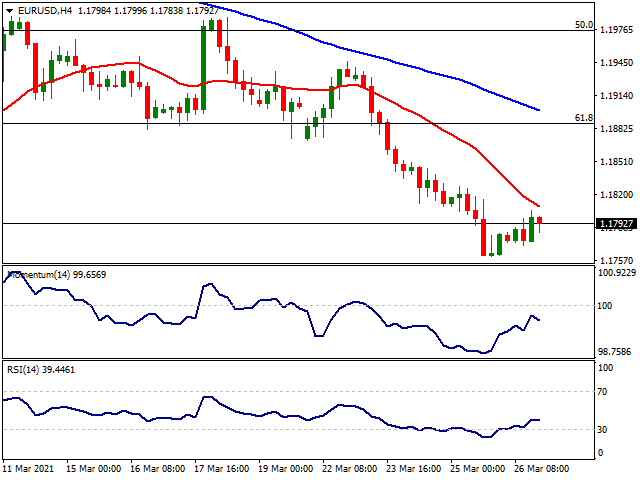 The USD/JPY pair hit 109.84 on Friday, its highest since May 2020, ending the week a handful of pips below the level. European equities closed in the green, reversing early losses, while Wall Street posted substantial gains, underpinning the pair. Also, US Treasury yields ticked higher, with that on the 10-year note settling at 1.67%, reflecting a better market mood.

Japan published March Tokyo inflation figures on Friday. The annual Consumer Price Index printed at -0.2%, below the 0% expected, while the core reading, which excludes fresh food and energy prices, improved from 0.2% to 0.3% YoY. At the weekly opening, the Bank of Japan will publish the Summary of Opinions.

The USD/JPY pair is bullish, according to the daily chart, as it advanced further above a bullish 20 SMA while the longer ones remain far below the current level. The Momentum indicator is stable within positive levels while the RSI advances within overbought readings, without signs of upward exhaustion. In the 4-hour chart, all moving averages head north below the current level, while technical indicators stabilized in overbought levels. As long as the pair remains above the 109.00 price zone, it has chances of breaking beyond the 110.00 mark. 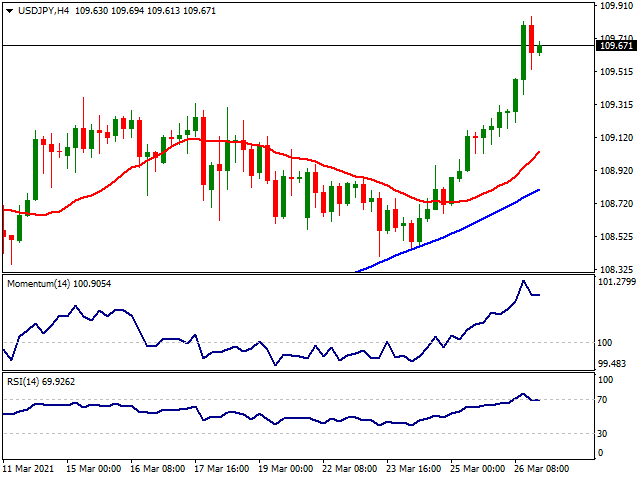 The GBP/USD pair advanced for a second consecutive day to close the week around 1.3790. Profit-taking ahead of the weekend and a better market sentiment played against the greenback while decreasing tensions between the EU and the UK helped the pound. Officials from both sides issued a joint statement mid-week, saying they’d discussed developing a “reciprocally beneficial relationship” to tackle COVID-19.

On Friday, the UK published February Retail Sales, which rose 2.1% MoM as expected. The annual reading came in at -3.7%, slightly worse than the -3.5% expected. The UK will publish at the beginning of the week February money-related figures and Mortgage Approvals, foreseen at 96K from 99K in the previous month.

The daily chart for GBP/USD shows that the pair remains below a mildly bearish 20 SMA but well above a bullish 100 SMA. Technical indicators advance within negative levels but remain below their midlines, suggesting limited buying interest. In the near-term, and according to the 4-hour chart, the downside seems limited as the pair extended its recovery above its 20 SMA, while technical indicators hold within positive levels, although without directional strength. The pair would have better chances of extending its advance on a recovery above 1.3825, the immediate resistance level. 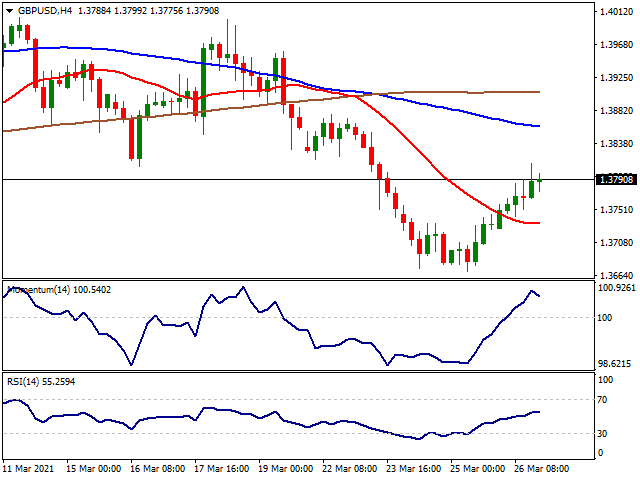 The AUD/USD pair advanced on Friday, recovering further from a weekly low of 0.7562, settling around 0.7650. The pair advanced throughout the American session, boosted by rising equities, which weighed on the demand for the safe-haven greenback. The pair got little clues from gold prices as the bright metal extended its consolidative phase at the end of the week to finish it around $1,730 a troy ounce.

Meanwhile, the Australian economic calendar has nothing to offer in the next couple of days, which means the pair will continue to trade on sentiment.

The AUD/USD is still at risk of falling. The daily chart shows that the pair has settled above its 100 SMA but remains close to it, while below the 20 SMA. Technical indicators advance within negative levels, with the Momentum approaching its midline, all of which indicate a limited bullish potential. In the 4-hour chart, the pair is neutral-to-bullish, as it advanced above its 20 SMA but remains below the larger ones. The Momentum indicator is flat, just above its 100 level, while the RSI avances currently at around 51. Still, the pair would need to recover above 0.7710 to have chances of recovering further. 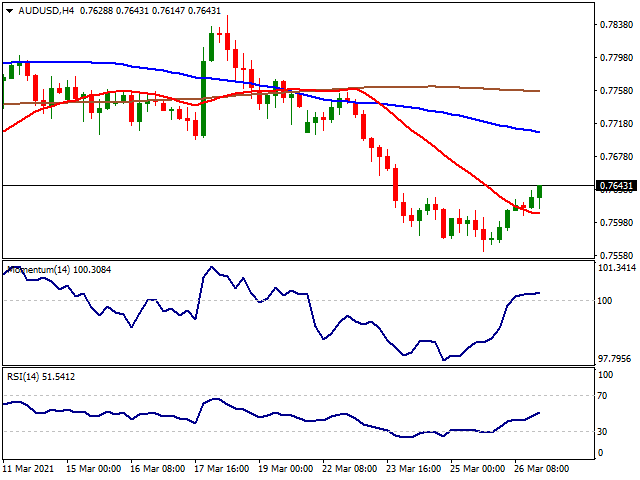 Gold prices on Friday remained in limbo. XAU/USD was ending the day up 0.35%, range-bound within familiar sideways territory. The yellow metal travelled between a low of $1,721.69 and a high of $1,736.76. US stocks traded higher into the weekend with a risk-on tone ignited after President Biden unveiled a more ambitious timeline for vaccine rollout in the US.

US rates saw a moderate sell-off with 10-year Treasury yields up 3.9% and 30-year yields up 2.2%. However, despite closing the week above its 200dma, the DXY closed at 92.70 and down 0.2%, leaving a bearish outlook for the greenback on the daily chart considering the W-formation and a high probability of a significant Fibonacci retracement.

While there is a strong fundamental case for the dollar carving out a bottom in Q1, owing to a faster economic recovery, to say, that of the EU’s, it won’t be a straight line. The Treasury market will remain the focus, especially as attention turns toward Nonfarm Payrolls this week. An outsized reading would be expected to push both nominal and real rates higher, along with the USD, (bearish for gold). The opposite can be said on a disappointment. Technically, $1,735 and $1,726 contain the sideways open and closes while $1,745 and $1719 are the breakout points. However, the hourly prospects are bullish for the open while above $1,730. 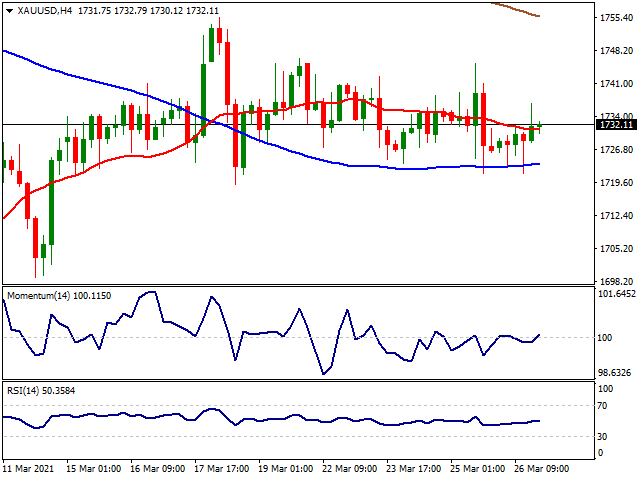 Silver had a similar fate in the US session as it did by the end of the London session. The price was rejected from the lows of both sessions as the US dollar crumbled. XAG/USD ended the day in slightly positive territory, 0.02% higher having travelled between a range of $24.8700 and $25.2580. The gold to silver ratio has been a strong performer in March, climbing over 11% since the late Feb lows as the white metal loses investor appetite with renewed interest in the US dollar.

While the Fed’s monetary framework was not expected to be good for the greenback, considering FAIT and how far the Fed will allow realized inflation to run above 2% to ‘make-up’ for periods when it has run below target, the market has instead started to bet on higher rates. Faster economic recovery and decoupling from the EU is a bullish undertone for the US dollar going into the forthcoming week where Biden administration is expected to release another fiscal package proposal.

Meanwhile, the dollar eased on Friday but remained near four-month peaks on continued optimism about the US economy. However, technically, a correction could be on the cards for the week ahead targeting a 38.2% Fibonacci retracement around 92.27. Or, below there, a deeper correction of old daily resistance and a confluence with a 50% mean reversion puts the focus near 92.00. As for silver, the price remains glued to the lower bound on the daily chart and continued failure to the downside leaves prospects for a bullish correction towards old structural support and a confluence of a 50% Fibonacci retracement near $25.4100. 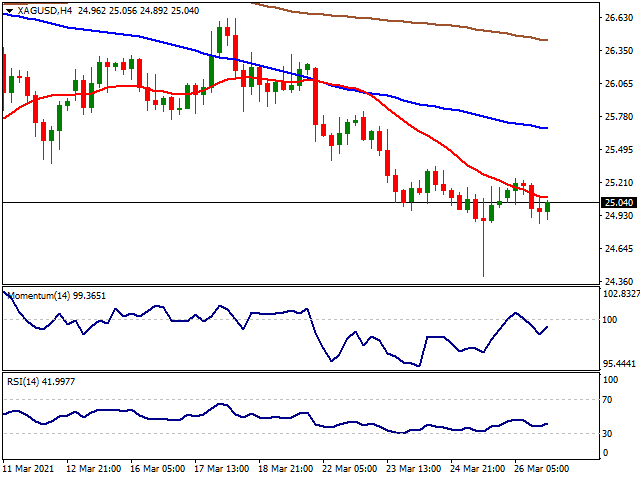 It was a seesaw week for the benchmarks into the final stages of the quarter as investors rebalance their portfolios. Stocks that stand to benefit from a growing economy were favoured along with ‘cheap’ technologies. The Federal Reserve’s outlook was a major theme for the stock market as the central bank raised its GDP estimate for 2021 to 6.5% from 4.2%. Still, many economists expect even faster growth, which has spurred fears the economy could run too hot and force the Fed to raise interest rates.

Meanwhile, from a technical standpoint, the market bounced nicely away from the March-range 38.2% Fibonacci retracement level near the lows of the day of 32,071. The index made a strong bullish close on Friday to target the March highs of 33,227. However, a bearish start to the week will expose the index to a 38.2% Fibo correction of the latest daily impulse which has a confluence with the 23rd March old resistance. 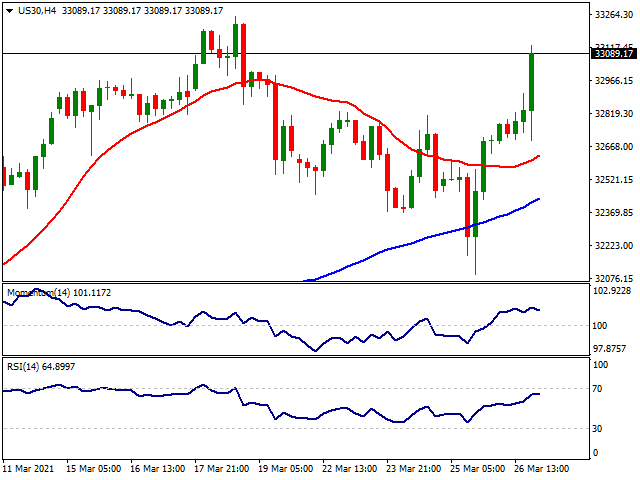 Wild swings in the price of oil continued on Friday, bouncing back following a plunge a day earlier on concerns that a large container ship that ran aground in the Suez Canal may block the vital shipping lane for weeks. Prices, however, were still headed for a third consecutive weekly loss. WTI spot ended 4% higher having travelled from a low of $58.35bbls to a high of $61.33bbls.

However, lingering concerns over the covid crisis in Europe and elsewhere, which would be expected to slow recovery of global fuel demand, is a headwind for the bulls. Countries in Europe are renewing restrictions. Moreover, Germany, Europe's largest economy, has seen its biggest increase in coronavirus cases since January. Overall, with another uncertain OPEC+ meeting coming up, as well as increasing Iranian supply coming into focus and with US shale recovered from the Texas winter storms, volatile markets are here to stay.

Technically, WTI has completed a 61.8% Fibonacci retracement on the weekly chart but closed bearish leaving a large wick to the downside. Subsequent bearish price action in the forthcoming week will leave the wick exposed, consequently putting in a daily downside extension to test $56. That being said, a break of $60.80 and a bullish daily close above the level will put the focus firmly back on the upside. 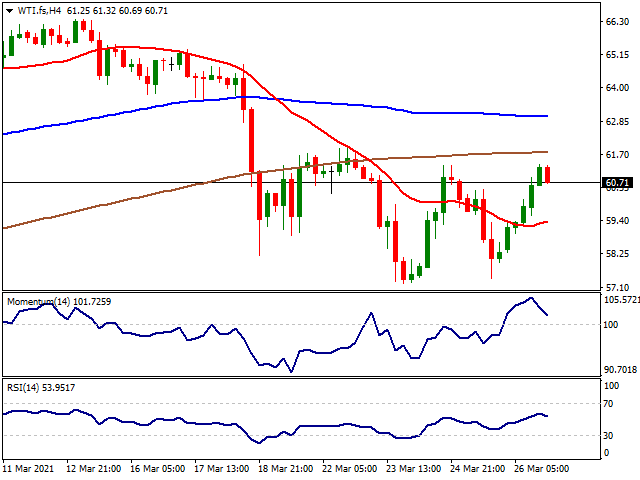