The EUR/USD pair fell to 1.1710. a fresh 2021 low, as the dollar return by the hand of US Treasury yields, which advanced to over one-year tops. The yield on the benchmark 10-year Treasury note rose to 1.77%. its highest since January 2020. Investors are betting that US President Joe Biden’s spending plan will further boost the economic recovery and hence inflation.

US data provided additional support to the greenback, as CB Consumer Confidence jumped to 109.7 in March, surpassing the expected 96.9. Earlier in the day, the EU published the March Economic Sentiment Indicator, which improved to 101 from 93.4, beating expectations. German inflation came as expected at 1.7% YoY in March, according to preliminary estimates. The US will publish some minor figures and CB Consumer Confidence, foreseen at 96.9 in March from 91.3 in the previous month.

On Wednesday, the EU will publish the preliminary estimate of March inflation data, while the US will release the March ADP survey on private employment, foreseen at 550K from 117K in the previous month. The event of the day will be US President Biden’s speech, expected to announce an up to $3 trillion infrastructure investment program, which is also expected to include taxes hikes.

The EUR/USD pair is near the mentioned daily low, with the risk still skewed to the downside. The 4-hour chart shows that technical indicators have stabilized well into negative territory, losing their bearish strength but without signs of downward exhaustion. The 20 SMA heads firmly lower above the current level, providing dynamic resistance at 1.1770, while the longer ones also head south above the shorter one. 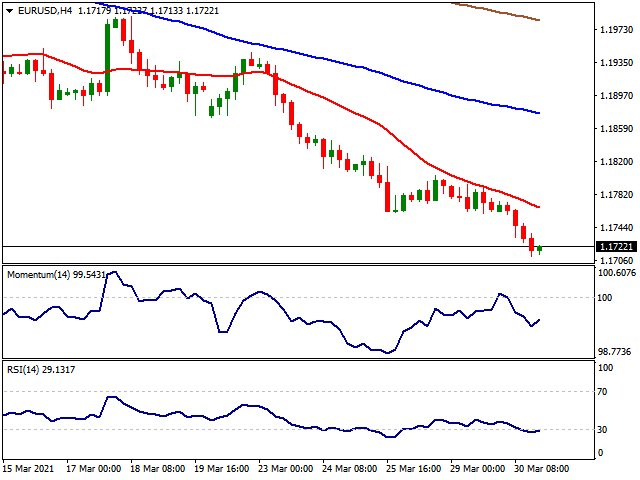 The USD/JPY pair hit 110.44, a one-year high, ending the day a handful of pips below the level. The dollar run on soaring yields, and retained its gains, despite government bond yields retreated while Wall Street closed the day in the red. The greenback was supported by upbeat US Consumer Confidence and hopes for a soon-to-come economic comeback.

Data wise, Japan published the February Unemployment Rate, which remained at 2.9%, better than the 3.0% expected. Also, Large Retailer Sales declined by less than anticipated, down by 4.7% in February. The country will publish February Housing Starts this February and Construction Orders for the same month.

The USD/JPY pair retains its bullish stance in the near-term. In the 4-hour chart, the pair continues to develop well above bullish moving averages, while the RSI indicator holds within overbought levels, currently at 77. The Momentum indicator retreated from daily highs but holds above its midline, reflecting the recent consolidation instead of suggesting an upcoming decline. 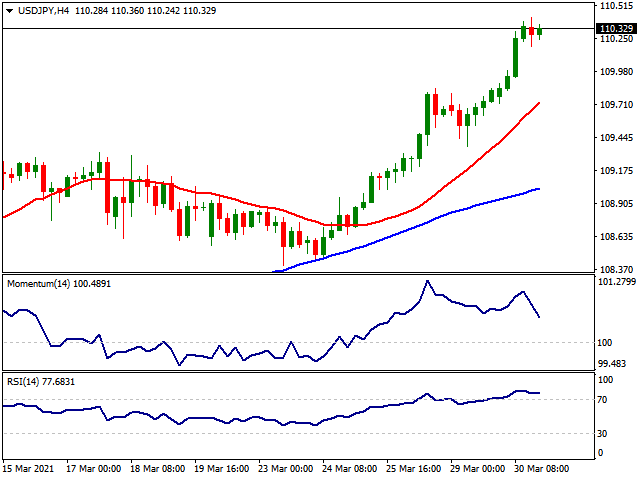 The GBP/USD pair fell to 1.3705, accelerating its decline early during the London session as US long-term Treasury yields picked up to fresh 14-month highs. The dollar also benefited from encouraging local data,  maintaining its positive momentum despite Treasury yields eased ahead of Wall Street’s close.

The UK did not publish macroeconomic data, but news coming from the kingdom continue to be encouraging. The country entered a new phase of reopening this week after massively vaccinating its population. At least 45% of people have gotten one shot of a coronavirus vaccine, although those fully vaccinated account for just 5.5%. On Wednesday, the UK will release the final reading of Q4 Gross Domestic Product, foreseen unchanged at 1%.

The  GBP/USD pair is trading around 1.3720 as the day comes to an end and has turned bearish in the near-term. The pair settled below all of its moving averages in the 4-hour chart, while technical indicators stand within negative levels, lacking directional strength. The pair bottomed at 1.3669 this March, and while it seems unlikely a break below the level, if it happens, the pair could approach February low at 1.3566. 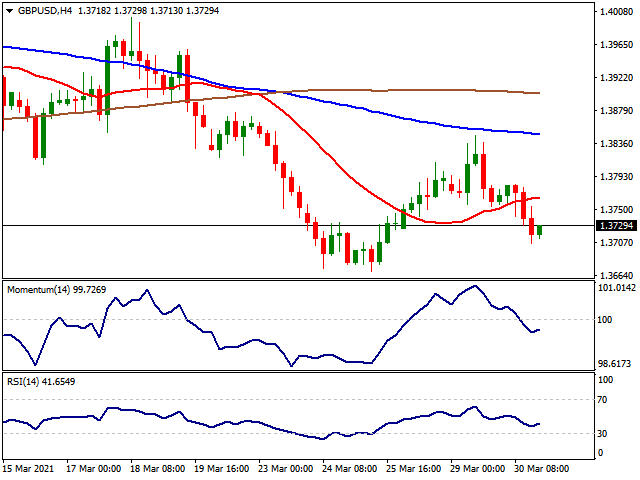 The AUD/USD pair trades below the 0.7600 level at the end of the American session, as higher government bond yields and weaker equities put pressure on the aussie. Additionally, gold prices plunged on the greenback’s demand, trading at around $1,682 a troy ounce as the day comes to an end.

The Australian macroeconomic calendar has remained empty so far this week, and the country will publish minor figures this Wednesday, including February Building Permits and Private Sector Credit for the same month.

The AUD/USD pair trades near a daily low at 0.7584 and could extend its slump during the upcoming hours. In the 4-hour chart, the pair stands below all of its moving averages, although the 20 SMA remains directionless. Technical indicators are also stable but below their midlines, skewing the risk to the downside. March low has been settled at 0.7562, the next support level and a breakout point. 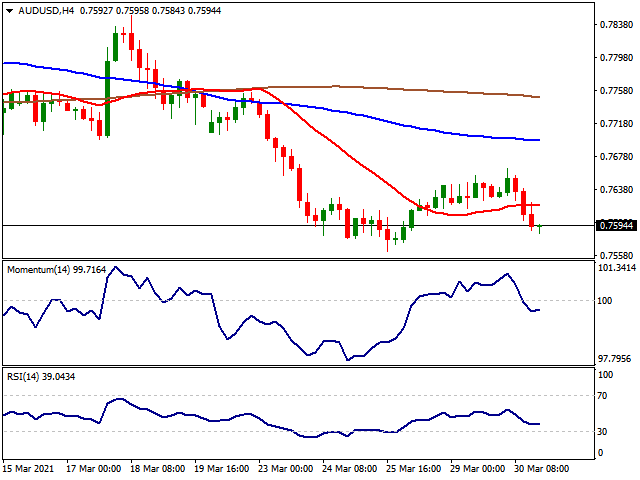 As per the gold to silver ratio, the wind is against the white metal more so than the yellow which potentially is favoured for its safer haven appeal. That being said, commodities are struggling in general for which silver has a higher correlation to due to its industrial qualities. The ratio was 1% higher by the close of Wall Street, extending six consecutive days of gains. The weakening commodity demand growth amid higher real yields and continued pressure thereof could even provoke a larger position shakeout in silver and more so in the industrial metals complex.

From a technical perspective, there could be a short squeeze in play first of all which brings in the weekly old support and a confluence of the 38.2% Fibonacci of the weekly bearish impulse’s range at $24.9280. With that being said, the momentum is with the bears and the -61.8% Fibo is located at $23.7000 which could attract a look-in before the week is out and prior to any weekly upside correction taking place. 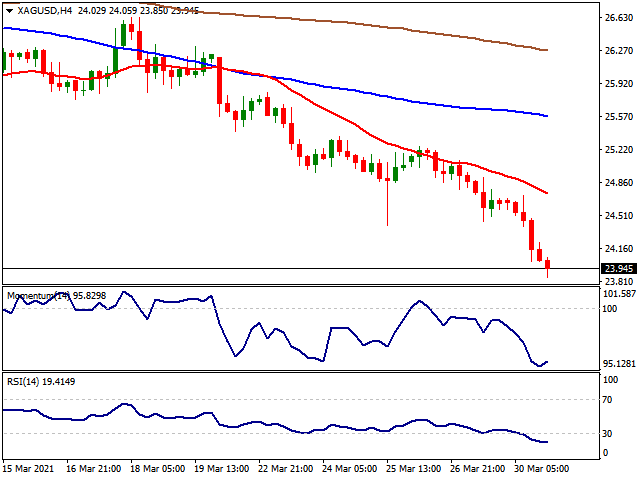 While traders awaited the latest crude and fuel inventories data, for which probably rose last week according to analysts polled by Reuters, the black gold was pressured on Tuesday. WTI crude ended down 2.3% and fell from a high of $62.25 to a low of $59.97. Not only did the Suez Canal reopen to traffic but the dollar rallied again, pressuring the commodities complex as a whole.

The backlog of 422 ships in the Suez Canal could be cleared in just 3-1/2 days according to the canal’s chairman. So, focus in the market is now moving away from this and towards the upcoming OPEC+ ministerial meeting on Thursday. Analysts expect the group to extend supply curbs given dim demand prospects and while concerns about a shortage of physical supplies abating.

Technically, from a monthly perspective, the candle is forming a Doji for month-end. This is a bearish topping pattern that puts the focus on the downside and 38.2% Fibonacci retracement comes in just below $55.00. With that being said, the weekly support between $57.20 and $59.60 is holding the price up for the time being and would need to be cleared. From a 4-hour perspective, the conditions are mixed with MACD above zero and the price testing below bearish 10 and 20 EMAs. 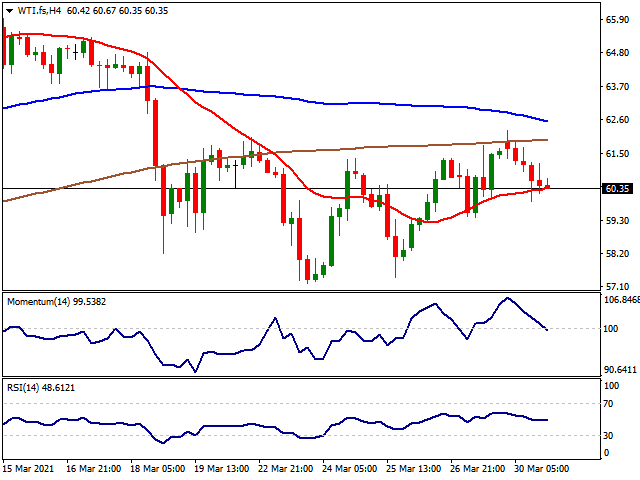 Value stocks are historically favoured into quarter-end which could take any shine left of tech stocks which have been hit the hardest by the rise in yields. Meanwhile, the S&P 500 and Dow have both benefitted from prospects of a faster economic rebound and Wednesday’s appearance by US President Joe Biden will unveil more details about the first stage of his infrastructure plan, which could be worth as much as $4 trillion.

Technically, the Dow could be embarking on a significant retracement towards the 38.2% Fibonacci level of the March range at 32,807. However, the 4-hour conditions, as measured by the rising 10 and 20 EMAs and positive MACD should also be noted. 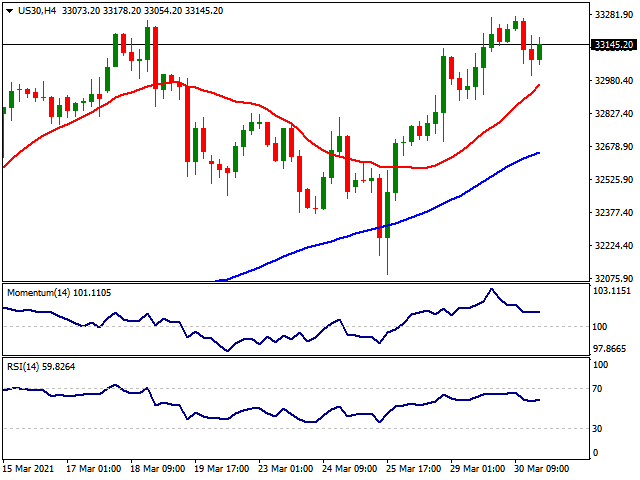 The New York-based hedge fund Archegos Capital fallout and higher Treasury yields continue to cast a shadow of uncertainty over markets. Gold prices, however, have failed to pick up the safe-haven bid despite a poor performance from US stocks on Tuesday. XAU/USD has given over to the US dollar of late and continues to bleed out from a poor start to the week.

The US 10-year yield rose to its highest level since January late last night (touching 1.7740%), before moving back to end the day flat around 1.7150%. Optimism fuelled by the US making vaccines available to 90% of people in the next month also bolstered reflation prospects, which for the time being, is having a negative impact on gold prices.

Technically, the price was caught up in the momentum of the bid in the US dollar which has so far denied the bears of any significant downside correction, on a daily basis. Gold has therefore been dragged down below the psychological $1,700 level and is testing the commitments of the bulls at prior daily support. At this juncture, a correction of the daily impulse would be expected, especially into month and quarter-end where portfolio managers would be looking to square up long dollar positions. A 38.2% Fibonacci correction from the current lows comes in at $1,700.93. 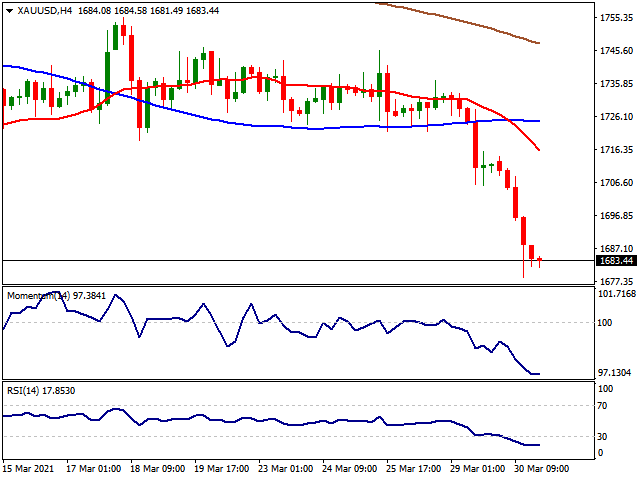