The American dollar was the best performer this Thursday, soaring against all of its major rivals. The EUR/USD pair plummeted to 1.2119, its lowest since mid-May, initially weighed by the US Federal Reserve, as the central bank announced on Wednesday that it will begin winding down one of its programs set to support the economy throughout the pandemic. "Portfolio sales will be gradual and orderly and will aim to minimize the potential for any adverse impact on market functioning," the Fed said.

The sour tone of equities due to tapering speculation backed the greenback during the European session, although it was upbeat US data, which boosted demand for the dollar. The country published the ADP survey on private jobs creation, which posted a whopping 978K in May, largely surpassing the 650K expected.  Initial Jobless Claims for the week ended May 28 printed at  385K, better than the 395K expected and the lowest reading since the pandemic started. Finally, the ISM Services PMI jumped to 64 in May, beating expectations.

On Friday, the US will publish the May Nonfarm Payrolls report. The country is expected to have added 644K new jobs in May, while the unemployment rate is foreseen at 5.9% from 6.1% in the previous month. An upside surprise in those two numbers could further boost demand for the dollar as it will add pressure on the Fed to tighten its monetary policy.

The EUR/USD pair trades near the mentioned daily low and has room to fall further. The 4-hour chart shows that, after meeting selling interest around a now bearish 20 SMA, the pair has broken below the 100 and 200 SMAs. Technical indicators reached oversold readings, paring their declines but holding nearby without signs of exhaustion. The immediate support comes now at 1.2115, with a break below it, probably resulting in an approach to the 1.2000 threshold. 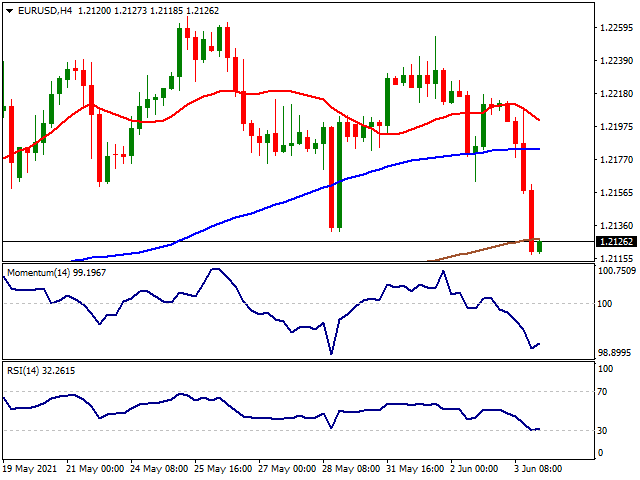 The USD/JPY pair soared to110.31, its highest in two months amid the firmer dollar’s demand. The dollar peaked against its Japanese rival during Asian trading hours in the 110.20 area, following news that the US Federal Reserve would start unwinding a Pandemic corporate credit facility, later retreating on the back of the poor performance of European stocks. Wall Street opened sharply lower, but upbeat US data helped local indexes to trim most of their intraday losses. Meanwhile, US government bond yields advanced, providing additional support to the pair.

On the data front, Japan published the May Jibun Bank Services PMI, which printed at 46.5, worse than the previous 49.5. Early on Friday, the country will release April Overall Household Spending and May Foreign Reserves.

The USD/JPY pair trades a few pips below the mentioned high, maintaining its bullish stance. The 4-hour chart shows that the pair bounced from a now mildly bullish 20 SMA, adding roughly 65 pips, a sign of substantial buying interest. Technical indicators pared their advances near overbought readings, also reflecting bulls’ control. The next relevant resistance comes at 110.96,  where the pair hit its yearly high back in March. 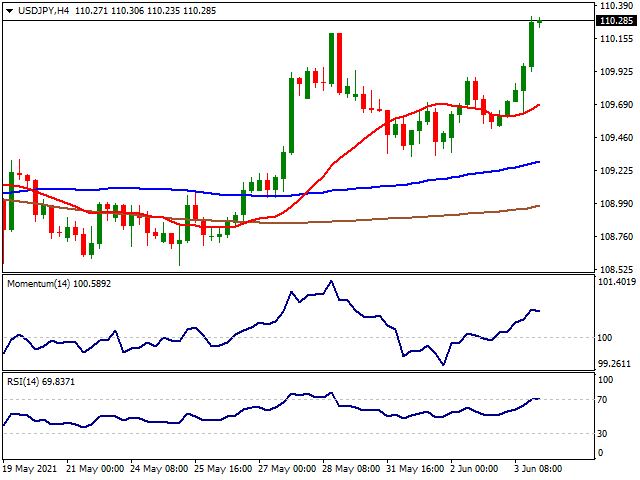 The GBP/USD pair trades at around 1.4085, not far from a daily low at 1.4091. The pair peaked at 1.4202 for the day, as the pound found support in an upbeat Markit report, which showed that the UK’s Services PMI expanded by more than anticipated in May, hitting 62.9. Concerns about US tapering weighed on equities, which dragged lower high-yielding currencies. Resurgent demand for the dollar pushed the pair further lower after the release of better than expected US data.

On Friday, Markit will release the May UK Construction PMI, foreseen at 62.3 from 61.6 previously, although the focus will remain on US employment-related data and whether the Federal Reserve will have to speed up tightening its monetary policy.

The GBP/USD pair trades near the mentioned low and seems poised to extend its decline. The 4-hour chart shows that it failed to sustain gains above its moving averages, with the 20 SMA now gaining traction above the 100 SMA, both above the current level. Technical indicators remain near daily lows within negative levels, with the Momentum aiming to recover but the RSI still heading south, in line with another leg south. 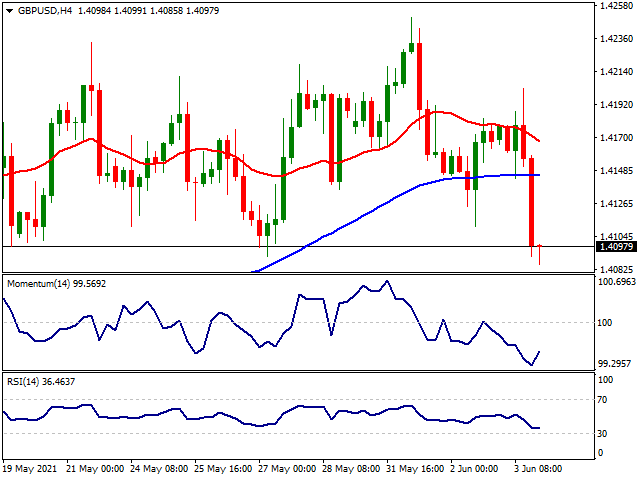 The Australian dollar fell against its American rival to 0.7644, its lowest since mid-April, trading nearby at the end of the day. The pair was on the back foot ever since the day started, undermined by renewed speculation of a soon-to-come tighter monetary policy in the US and upbeat data in the country, both boosting demand for the greenback.

Australia published the May AIG Performance of Construction Index, which came in at 58.3 from 59.1 in April. The Commonwealth Bank Services PMI printed at 58, missing the expected 58.2, while the country’s Trade Balance posted a surplus of 8028 million in April, beating expectations. Finally, April Retail Sales were confirmed at 1.1% MoM. Early on Friday, the country will publish housing-related figures.

The AUD/USD pair plummeted after another failed attempt to surpass a daily descendant trend line coming from May’s monthly high. The 4-hour chart shows that it fell below all of its moving averages, with the 20 SMA gaining bearish strength below the longer ones. Technical indicators consolidate at daily lows, with the RSI currently at 28. The year low was set at 0.7531, a probable bearish target for this Friday. 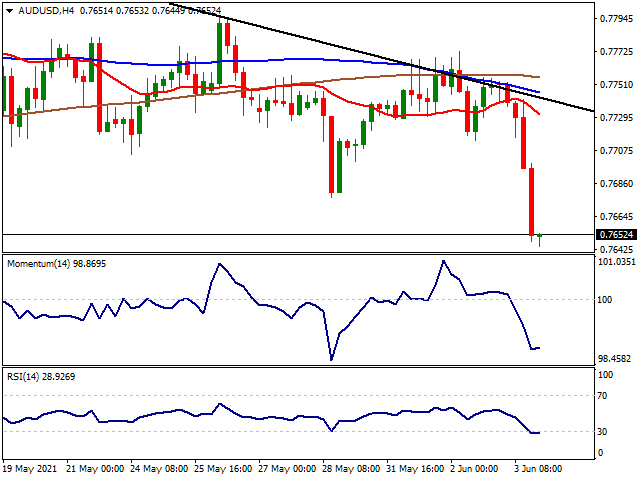 Gold was dumped on Thursday as the US dollar jumped-started back to life ahead of a highly anticipated Nonfarm Payrolls event on Friday. The yellow metal ended on Wall Street down nearly 2% to $1,870. The greenback, measured vs a basket of currencies in the DXY index, was closing 66% higher to 90.50 having rallied from a low of 89.8870 to a high of 90.5510. Gold has broken a key area of near term support and brings the longer-term charts and downside targets into focus.

Stronger-than-expected ADP data reinforced signs that the world's largest economy is well and truly on its way towards a post covid recovery which should entice the Fed to act sooner than later. For instance, Dallas Fed's CEO Robert Kaplan has repeated today, ''it's my view it would be better to ease off the QE accelerator gradually sooner rather than having to hit the brakes later.’’ That being said, the Services job component was not as promising as it slid from 58.8 in April to 55.3.

Technically, the price has broken a key shorter-term support structure. On the 4-hour chart, old dynamic support was breached and was retested as a counter trendline which held and subsequently gave way to a major sell-off.  Gold has since reached a prior area of weekly and shorter-term liquidity and has started to correct from there. The price would be expected to correct to at least a 38.2% Fibonacci retracement of the 4-hour bearish impulse, at 1,882, where a confluence of the prior lows is found prior to heading into the 1,840/50s demand area. Higher up, 1,892 has a confluence of the M-formation's neckline and a 61.8% Fibo retracement. 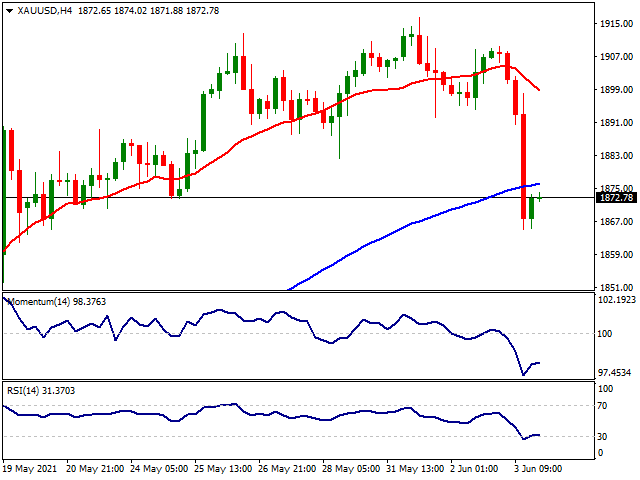 The price of silver melted into bearish territory on a widespread movement in the greenback. XAG/USD dropped to a low of $27.03 from a high of $28.23 and was ending the North American day down by nearly 2.7% around $27.42.
Besides strong US data and a cautionary tone in markets that supported the greenback, a weaker crypto space of late had otherwise been potential support to precious metals. However, Bitcoin has been in recovery this week which may have played into the downside in silver as well.

Meanwhile, recent moves throughout this week by the People's Bank of China that has essentially intervened to weaken the onshore yuan, are helping to support the greenback and consequently could be weighing on commodity and precious metal prices. This keeps traders looking to USD/CNY for broader market direction and further strength could suggest more of a squeeze on latent short-USD positions.

From a technical standpoint, Silver made a double top on the daily chart and was unable to go for a third or break deeper into resistance nor crack it. As a consequence, the focus is firmly on the downside for the medium term. However, while there are prospects of a deeper correction, the hourly time frame and structure is compelling for the forthcoming sessions.

The correction has met prior hourly support and the 10 hour EMA  that would be expected to now act as resistance at 27.48 given the confluence of the 50% mean reversion level of the bearish impulse. A subsequent rejection could lead to a lower low. From a 15-min vantage point, we can see that the price will need to break below the current support structure at 27.42 first which would be expected to act as resistance on a retest before a continuation to at least 26.91 daily structure. 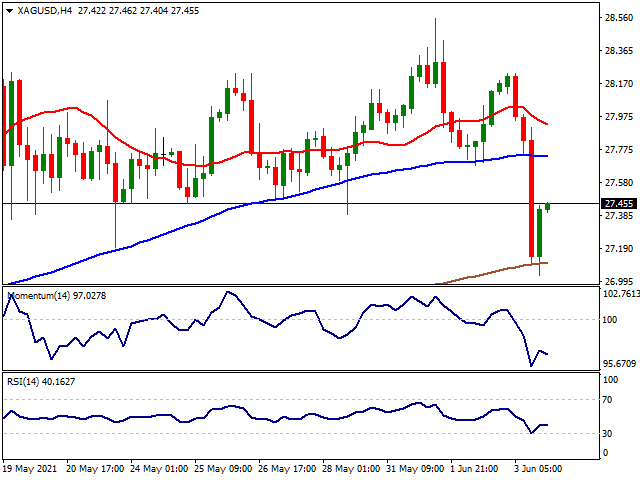 Oil prices were consolidating on Thursday with spot WTI moving between a low of $68.21 and a high of $69.37, up some 0.23% by the end of the North American day. The black gold has been a solid performer in the asset classes for the month of June so far following two straight days of gains. Oil futures have rallied this week to highs not seen in a year after weekly US crude stocks fell sharply while fuel inventories rose more than expected.

Technically, the price of oil is moving higher but old daily resistance would now be expected to act as support where there is a confluence with the 10-day EMA. At this juncture, and according to the monthly chart, a correction might be on the cards before long. The prior highs have a confluence with the 38.2% Fibonacci retracement level at 66.38 at this point. 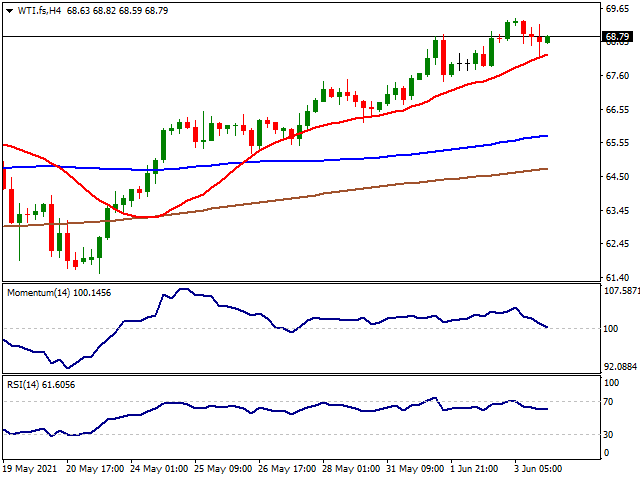 On a mixed day, US stocks finally finished up Thursday's session lower following weekly jobless claims that fell to the lowest level since March 2020. Counterintuitively, this is raising concerns that the Federal Reserve will have no choice but to step in earlier and tweak its policy settings.

Consequently, the US dollar rallied and the Dow was 0.1% lower at 34,577.04, the S&P 500 dropped 0.4% to 4,192.85. The Nasdaq Composite was the hardest hit, falling by 1% to 13,614.51. As for performers, consumer discretionary and technology shares lagged while utilities and consumer staples were the strongest sectors.

Attention will now turn to the Nonfarm Payrolls data. As a prelude, Thursday’s US private payrolls increased by 978,000 jobs in May, the ADP National Employment Report showed. At the same time, US initial jobless claims dropped below 400,000 last week for the first time since the COVID-19 pandemic started more than a year ago. Such improvements in data could set the tone at central bank meetings later this month.

Technically, the daily charts' price action is still being supported by the 10-day EMA which guards the 50% Fibo of the prior 4-hour bullish impulse at 34,512.  Below there, the 20 EMA guards the prior day’s lows of 34,334. A bullish continuation, however, will bring the record highs back into focus. 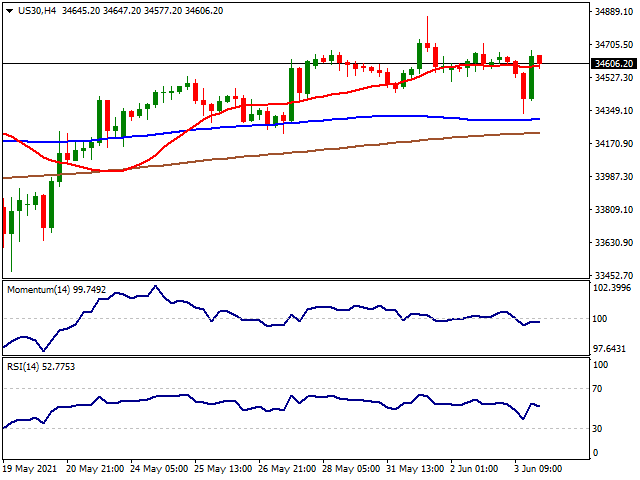