The EUR/USD pair fell further on Thursday, reaching a daily low of 1.1891, a level that was last seen early in April. The dollar kept ruling on the heels of the US Federal Reserve monetary policy decision, as the central bank surprised with a hawkish stance, hinting at possibly two rate hikes in 2023 while upwardly reviewing its growth and inflation forecasts. Stocks showed a late reaction to the latest Fed’s stance, edging sharply lower during the US afternoon.

The EU published May inflation figures. The Consumer Price Index was confirmed at 2% YoY, while the core reading resulted at 1%, slightly better than anticipated. As for the US, the country published the June Philadelphia Fed Manufacturing Survey, which printed at 30.7, below the 31 expected. Initial Jobless Claims for the week ended June 11 unexpectedly jumped to 412K, worse than the 359K expected. The macroeconomic calendar will include on Friday the German May Producer Price Index and the EU April Current Account. The US won’t publish relevant data.

The EUR/USD pair bounced from the mentioned low, heading into the Asian session trading around 1.1910. The pair has reached extreme oversold conditions in the near-term, and a corrective advance is not out of the table, although bears retain control. The 4-hour chart shows that the pair has broken below all of its moving averages, with the 20 SMA heading south below the longer ones. Technical indicators are bouncing modestly from extreme readings but hold within oversold levels. 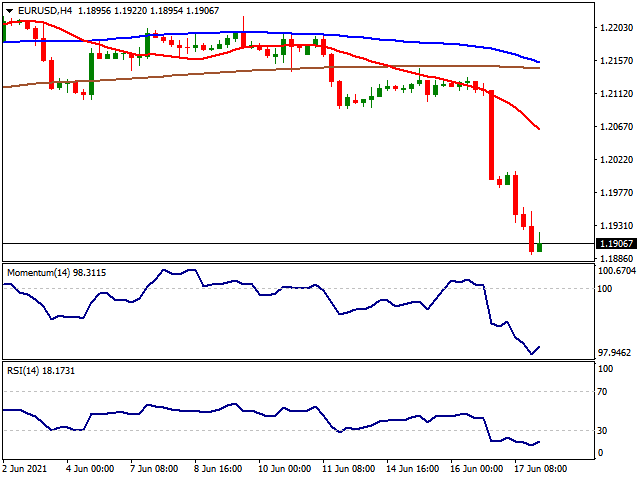 The USD/JPY pair traded as high as 110.81 on Thursday but ended the day in the red around the 110.20 price zone. The pair followed the lead of US government bond yields, which retreated from their post-Fed highs. The yield on the 10-year Treasury note bottomed at 1.47% after peaking at 1.59% for the week. It stabilized around 1.50% in the American afternoon.

Data wise, Japan released bond investment figures, which usually has no impact on price action. Early on Friday, the country will publish May National inflation, foreseen at -0.7% YoY. Additionally, the Bank of Japan will announce the result of its monetary policy meeting.  No changes to the monetary policy are expected, although policymakers may extend the pandemic relief program currently up until next September.

The USD/JPY pair has trimmed most of its post-Fed gains, but the bearish potential remains limited at the time being. The 4-hour chart shows that it keeps meeting buyers around a bullish 20 SMA, which advances above the longer ones. Technical indicators have retreated sharply from overbought readings, decelerating their declines just above their midlines. The bearish case could be stronger if the pair loses the 109.50 support level. A critical resistance comes at 110.96, this year high. 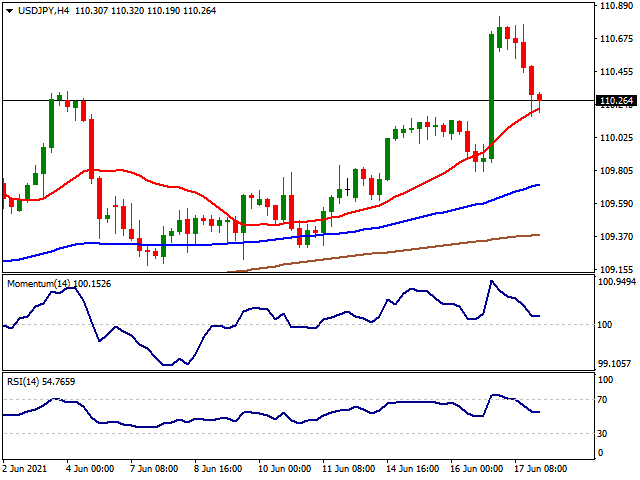 The GBP/USD pair traded as low as 1.3895 in the aftermath of a hawkish US Federal Reserve, now heading into the Asian opening trading at around 1.3900. The UK did not release macroeconomic figures that could add to the pound’s behaviour. Still, tensions surrounding the Northern Ireland Protocol undermine sterling´s demand.

Meanwhile, the UK reported that new coronavirus cases in the country are doubling every 11 days amid the rapid spread of the Delta variant. The country already delayed lifting lockdown measures and is speeding up immunization. This Friday, the UK will publish May Retail Sales, seen up by 1.6% MoM, and Consumer Inflation expectations, previously at 2.7%.

The GBP/USD pair bounced from the mentioned low, currently trading in the 1.3920 price zone. The risk is skewed to the downside, according to the 4-hour chart, as the pair is far below a bearish 20 SMA, which extended its slump below the longer ones. Technical indicators correct extreme oversold readings but remain well into negative territory, indicating absent buying interest. 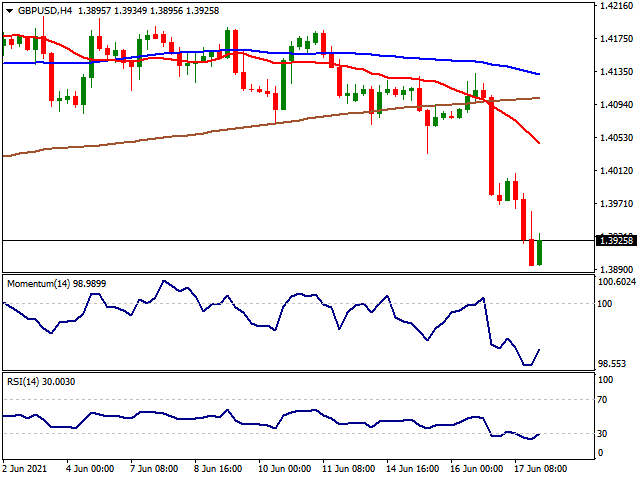 The AUD/USD pair peaked at 0.7645 during Asian trading hours, helped by upbeat Australian data. The pair resumed its decline during the European morning amid renewed demand for the greenback. Australia published May employment figures at the beginning of the day, which showed that the country added 115.2K new jobs, 97.5K of which were full-time positions. Moreover, the Unemployment Rate contracted to 5.1% from 5.5%, while the Participation Rate improved from 66% to 66.2%.

At the same time, the Reserve Bank of Australia Governor Philip Lowe offered a speech in which he noted that it is premature to cease bond-buying, adding that the economy is still in a recovery phase. The Australian macroeconomic calendar has nothing to offer on Friday.

The AUD/USD pair is trading near a daily low of 0.7538, a few pips above the 2021 low at 0.7531. The 4-hour chart shows that the pair is developing far below bearish moving averages, with the 20 SMA accelerating lower below the longer ones, reflecting strong selling interest. Technical indicators pared their declines, now consolidating in oversold territory. A break below 0.7531 should open doors for a steeper decline, with the market then eyeing an approach to the 0.7400 area. 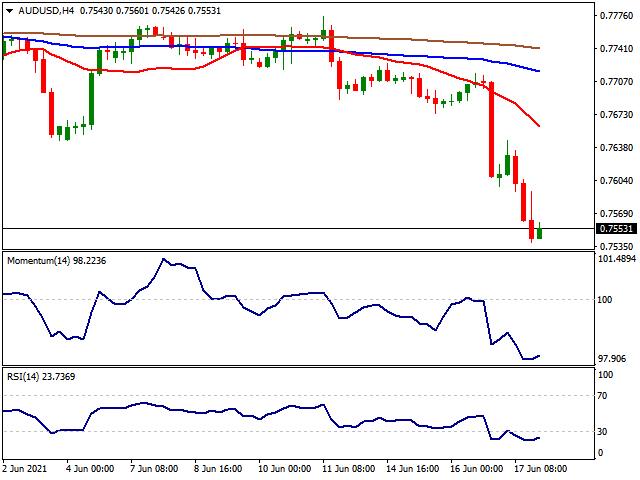 The price of the yellow metal on Thursday was licking its wounds well below the prior daily support after it over 5.2% since Fed Chair Powell described this week's Federal Open Market Committee meeting as the 'talking about talking about’ meeting.

FOMC members could now seek a plan to reduce the pace of QE and the weak hands have started to bail ship. Crucially, the members are also bringing forward their projections from flat to +50bp in rate hikes by end-2023.

However, one of the key takeaways from the meeting for gold markets was the reaction in the 10-year breakeven inflation rates that are down 6 bp on the hawkish hold. With that being said, there was a development on Thursday in the bond market that could help to stabilise precious metals in the near term.

The US 10-year yield collapsed in New York trade on Thursday and dropped from 1.5940% to a low of 1.4690%, ending the day down -4.00%. The yield on the US 30-year bond also fell to its lowest level since late February. This is a sign that the market is clearly of the conviction that the rise in inflation is transitory. Meanwhile, from a technical perspective, the bulls are stepping in at a critical area of support. This is a key area of liquidity that dates back to 2011. Bulls could step in for some low hanging fruit at this juncture and target a significant correction back to 1,818. 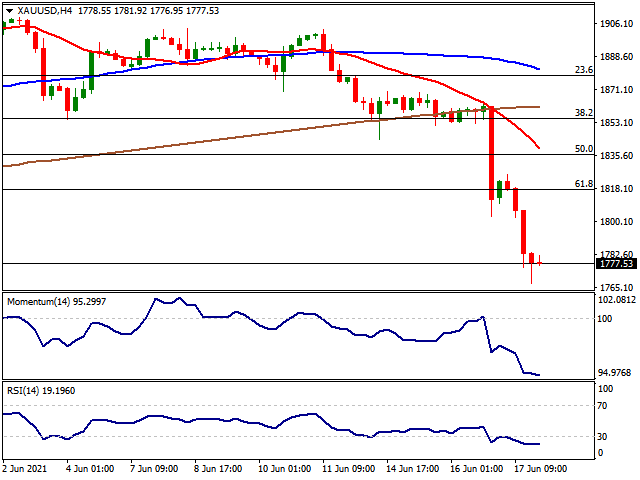 The price of silver was down over 4% by the end of the North American session, losing its footing in the wake of US dollar strength. XAG/USD fell from a high of $27.24 and landed heavily on a low of $25.77 marking one of the biggest falls for the year so far.

There was no-let up in the US dollar on Thursday, the day after the U Federal Reserve switched up its rhetoric to such an extent that markets, on the knee-jerk, priced in rate hikes to come sooner than first expected and as if tapering by August was a done deal. However, the bond market started to paint a different story on Thursday which could give rise to a sharp correction in the US dollar, subsequently supporting precious metals which have been sold off to extreme weekly technical levels.

USD/JPY’s bearish move might be telling a story following a drop in US yields today. Yield curves flattened led by a strong rally in US medium and longer-dated securities as US inflation expectations fell back sharply. The US 10-year yield fell sharply from 1.5940% to a low of 1.4690%, ending the day down -4.00%. The yield on the US 30-year bond also fell to its lowest level since late February. This is a sign that the market is clearly of the conviction that the rise in inflation is transitory.

As the markets begin to take profits on the moves, or as buyers step back into riskier asset classes, the dollar could tumble and silver will be looking up to the 26.78 38.2% Fibo of the daily beamish impulse. 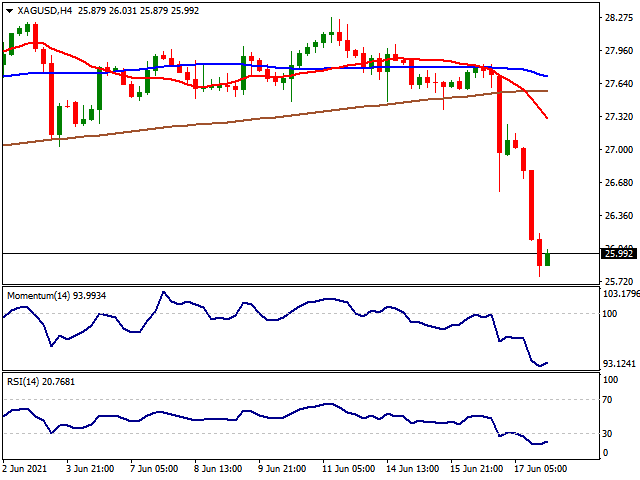 Meanwhile, the energy complex will look to Friday's presidential elections in Iran that could scuttle nuclear talks between Washington and Tehran and leave US sanction on Iran's oil exports in place. Washington has sanctioned Raisi for alleged involvement in executions of political prisoners. His election matters for the oil sector because it would make it tougher for the United States and Iran to come to an agreement on Iran's uranium enrichment. Therefore, US sanctions on Iran's oil exports may not be lifted.

Technically, the price is below the 4-hour structure and is seeking a retest of it near 71.35. In doing so, it will also be brushing up against bearish commitments at the counter trendline resistance. This reinforces the area and a downside continuation could be the next chapter in the story for the closing session of the week ahead as a spree of profit-taking ensues before the weekend. 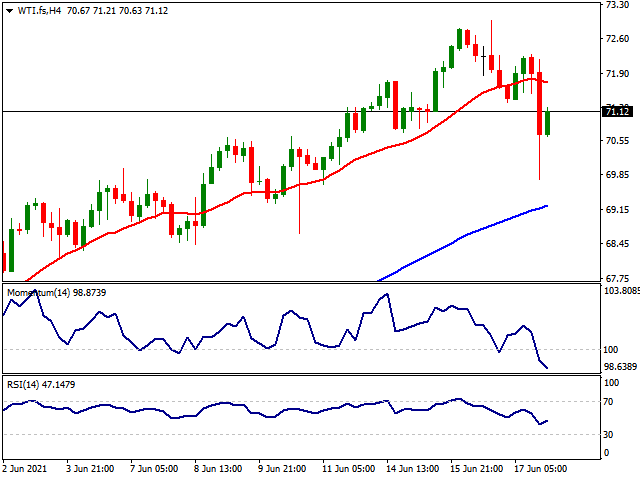 As for performers, energy and financials were among the steepest decliners while technology was the strongest sector. The US 10-year yield fell sharply from 1.5940% to a low of 1.4690%, ending the day down -4.00%. The yield on the US 30-year bond also fell to its lowest level since late February.
As for the data, Initial Jobless Claims climbed 37,000 for the week ended June 12 to 412,000< This was the best level in a month. However, the Philadelphia Fed's manufacturing index fell to 30.7 in June from 31.5 in May.

Techcnailly, the Dow is correcting from the breakout lows in the aftermath of the Fed and will be subject to a significant retracement at these levels so long as the bulls keep above 33,800. A 34,080 38.2% Fibonacci retracement could be on the cards for the remaining sessions ahead as traders continue to take profits to square books and buy back into US stocks. 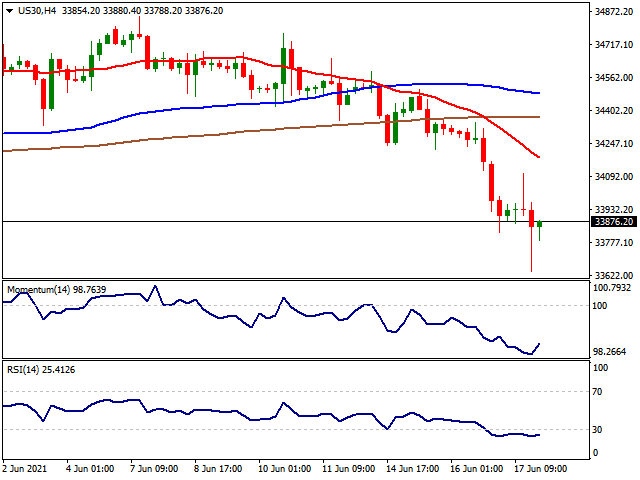