The EUR/USD pair trades in the 1.1860 price zone, little changed on a daily basis. It peaked at 1.1896 during the European session, as better than expected data maintained the market’s mood on the positive side. The sentiment took a turn for the worse during American trading hours, amid signs of slowing economic progress in the US.

Markit published the final versions of its July Manufacturing PMIs. The EU index was upwardly revised to 62.8, although slightly down from the previous 63.4, indicating that growth remains strong. The German figure was revised to 65.9, also better than the previous 65.1. In the US, the Markit Manufacturing PMI resulted at 63.4, but the official ISM index contracted from 60.6 to 59.5. Nevertheless, the sector has grown for the fourteenth consecutive month.

There won’t be relevant data to take care of on Tuesday, with investors waiting for US-employment related figures later in the week. The EU will release the June Producer Price Index, while the US will unveil June Factory Orders.

The EUR/USD pair has lost its bullish momentum. The 4-our chart shows that it is still holding above all of its moving averages, currently hovering around a bullish 20 SMA. The latter advances above the longer ones, with the 200 SMA heading south, somehow suggesting decreasing buying interest. Meanwhile, the Momentum indicator has crossed its midline into negative levels, while the RSI is stable at around 54.  The pair needs to advance beyond 1.1920 to actually turn bullish, while the risk will turn south on a bearish extension below 1.1840, the immediate support level. 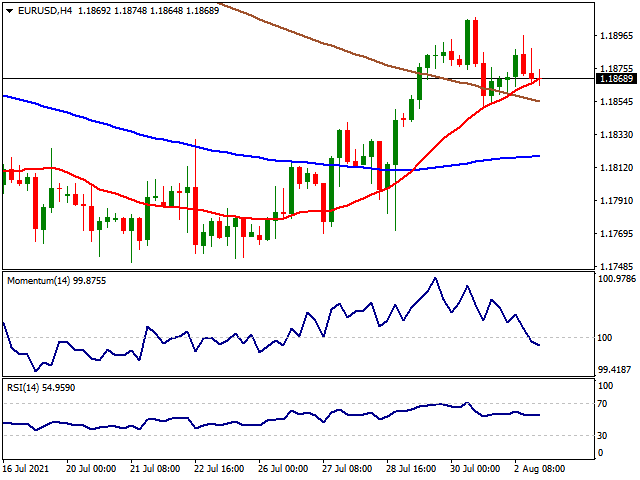 The USD/JPY pair broke lower and fell to 190.18, approaching the multi-month low set in July at 109.06. The broad dollar’s weakness persisted throughout the day but gained momentum around Wall Street’s opening, as stocks plummeted while investors rushed into government bonds, sending yields sharply lower. The yield on the 10-year US Treasury plunged to 1.15%, to end the day at 1.18%.

Japan published the July Jibun Bank Manufacturing PMI, which improved to 53 from 52.2 in the previous month. Early on Tuesday, the country will release July’s Tokyo inflation data. The annual Consumer Price Index is foreseen unchanged from the previous monthly reading, with the core reading at 0%.

The USD/JPY pair trades at around 109.35 and has room to extend its slump. The 4-hour chart shows that it has accelerated its decline below a bearish 20 SMA, which gains bearish momentum below the longer ones. Additionally, technical indicators consolidate intraday losses within negative levels, with the RSI hovering near oversold readings. The pair could accelerate its decline on a break below July’s monthly low, then approaching the 108.00 figure. 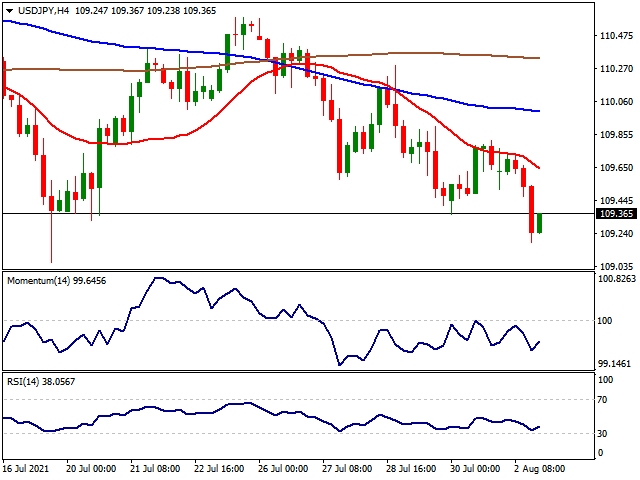 The pound started the week with a weak tone, with GBP/USD falling to 1.3875, its lowest in three days. The pair peaked at 1.3932, helped by the UK Markit Manufacturing, which improved to 60.4 in July, as anticipated. Poor US data hit the market’s mood, leading to sharp Wall Street’s losses and mild demand for the safe-haven dollar. Persistent tensions around the Northern Ireland Protocol. The EU has paused its legal action against the UK for alleged breaches of the Northern Ireland Protocol last week but refused to review the Protocol that the UK wants to change.

The UK won’t publish macroeconomic data on Tuesday, with the focus on the BOE’s Super Thursday.

The GBP/USD pair trades a handful of pips below the 1.3900 level, and it is at risk of falling further. The 4-hour chart shows that it has been unable to advance beyond a flat 20 SMA, currently providing dynamic resistance around 1.3920. The longer moving averages are losing directional strength below the current level, while technical indicators are flat just below their midlines. Chances of a bearish continuation will likely increase on a break below 1.3865, the immediate support level. 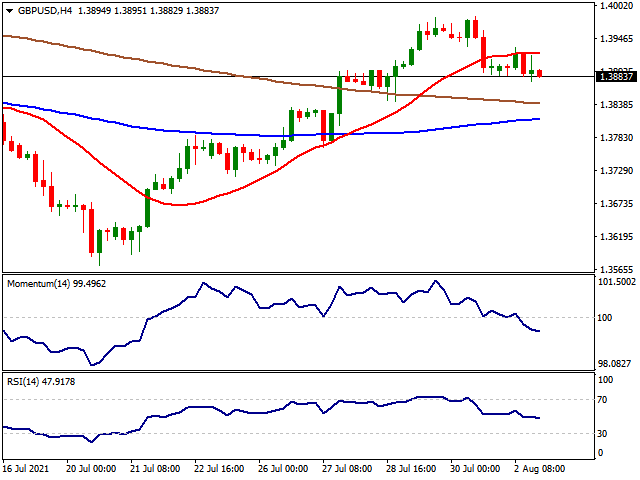 The AUD/USD pair posted a modest intraday advance on Monday, ending the day in the 0.7360 price zone. It peaked at 0.7381, later weighed by the poor performance of US equities. Absent demand for the greenback kept the downside in check. Higher gold prices helped limit slides, despite tepid Australian data released at the beginning of the day. Australian TD Securities Inflation improved from 0.4% to 0.5% MoM in July, while the annual reading printed at 2.6%. The AIG Performance of Manufacturing Index came in at 60.8 in July, down from 63.2 in the previous month.

The Reserve Bank of Australia will announce its monetary policy decision on Tuesday, August 3. The central bank is expected to maintain the cash rate steady at 0.1% and the three-year target of 0.1% on government bonds. In its previous meeting, the RBA decided to reduce the pace of bond purchases starting September from A$ 5 billion per week to A$ 4 billion. However, and given the latest coronavirus-related developments, market participants are expecting the RBA to revert such a decision and present a more cautious stance.

From a technical point of view, the AUD/USD pair is still at risk of falling. The 4-hour chart shows that a flat 20 SMA keeps capping the upside while developing below bearish longer moving averages. Meanwhile, technical indicators remain within negative levels, lacking directional strength. The bearish case will be firmer on a break below 0.7288, this year low. 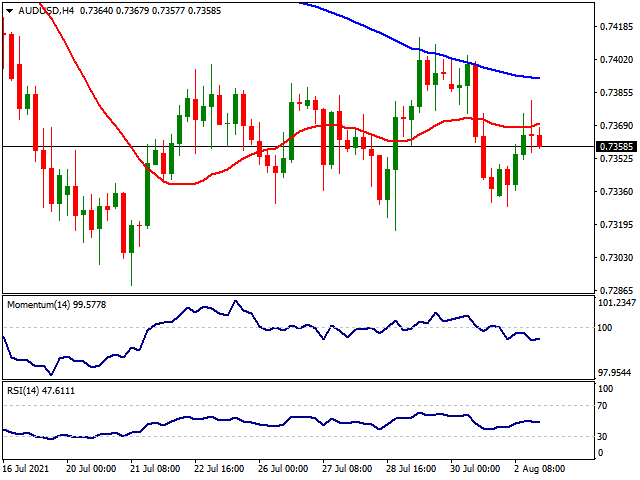 XAU/USD was trading at $1,813.00 and flat after traveling from a low of $1,805.87 to a high of $1,819.56 on Monday. The dollar was soft Monday as traders continued to embrace the statements from Federal Reserve policymakers last week.

Investors have speculated that the Fed is in no hurry to raise interest rates which is a green light for risk-on, denting the appeal of the greenback. The dollar index, DXY, which measures the greenback against six major peers, was off 0.19% at 91.912 the lows but it had attempted to recover to a flat positing on the day, touching a high of 92.171.

Meanwhile, US Treasury bond yields also dropped on Monday to 1.15%, taking real yields - adjusted for inflation - to record lows which is a supportive factor for the gold price. Global stock indexes were up in morning trading in New York as improving prospects for passage of a US infrastructure bill encouraged risk-taking, but the optimism soon fell away and left stocks down on the day. However, US Senators introduced a sweeping $1 trillion bipartisan plan to invest in infrastructure, with some predicting the chamber could pass this week the largest public works legislation in decades.

From a technical stance, it is make or break for the price of gold as it hovers around critical 21 and 50 EMA convergence on the daily charts and between familiar support and resistance. A break of either side, 1830, 1790, would be a significant development.  The bulls will need to clear 1,834 to harden the outlook from a longer-term perspective. In doing so, the weekly bullish reverse head & shoulders in development will be a compelling feature for the foreseeable future. A 61.8% Fibonacci target of the weekly bearish impulse comes in near 1,850. However, a break below 1,790 will open prospects of the 1,730s. 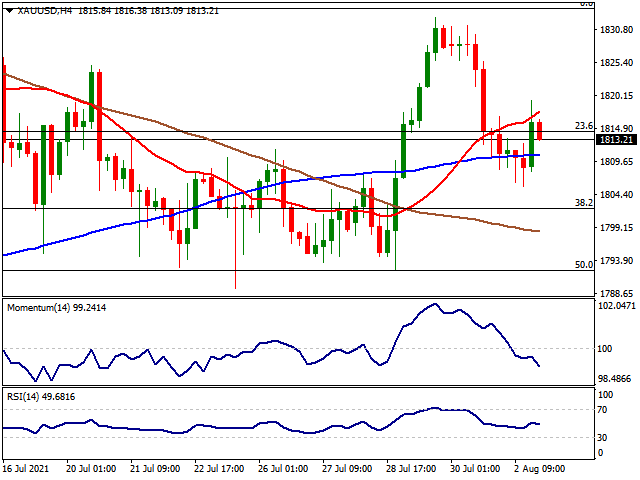 Silver was ending lower on Monday, down some 0.33% after falling from a high of $25.63 to print a low of $25.30. The white metal failed to pick up a bid from a softer US dollar and instead, moved in a sideways consolidation between familiar ranges. Following a set of poor data from China and a miss in the US manufacturing numbers, the dollar index, DXY, which measures the greenback against six major peers, was off 0.19% at 91.912 the lows on the day. The currency had attempted to recover to a flat position, touching a high of 92.171 before the end of the session on Wall Street.

Meanwhile, and crucially for precious metals, the US Treasury bond yields also dropped on Monday to 1.15%, taking real yields - adjusted for inflation - to record lows. However, there was no follow-through in silver compared to gold which benefited in the move in the greenback. If there is going to be a rally in the Us dollar, it is unlikely to resume in force until a more hawkish Fed narrative takes hold which should help to underpin metals for the near term. The US Nonfarm Payrolls data will be eyed this week and will be critical ahead of the Jackson Hole where some analysts are expecting a taper timing announcement.

Technically, the charts are consolidating and only a break above the 61.8% Fibo near 25.90 of the weekly bearish impulse will leave the bulls in good stead for higher highs. Bulls could then seek to target back above the weekly counter trendline and within the bullish trend. On the flip side, a break of 24.50 will open 24.12 and 23.66 thereafter. 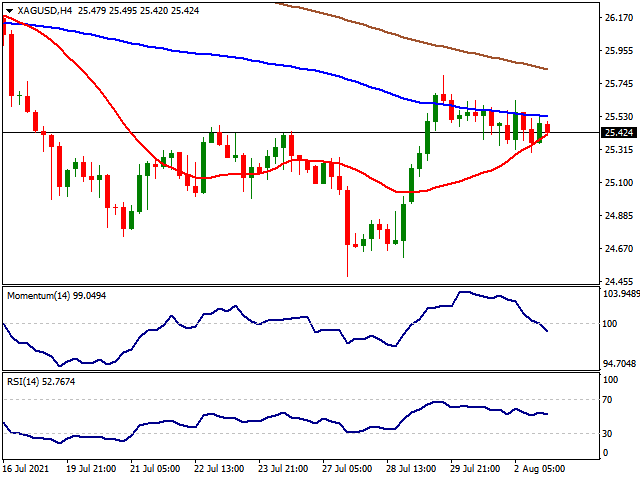 The spot West Texas Intermediate (WTI) oil price was lower on Monday, ending the Wall Street session down some 3%. WTI fell more than 3% at its worst levels to $70.58 following weak economic data from China and the United States, the world's top oil consumers.  Additionally, higher crude output from OPEC producers stoked fears of weakness in oil demand and oversupply. Consequently, Brent crude oil futures ended down $2.52, or 3.3%, at $72.89 a barrel, while WTI finished  $2.69, or 3.6%, lower at $71.26.
In data, China's factory activity growth slipped sharply in July as demand contracted for the first time in more than a year, a survey showed on Monday. This, across the Pacific, US manufacturing activity also showed signs of slowing. The ISM's index of national factory activity fell to 59.5 last month, the lowest reading since January, from 60.6 in June. Another weight on the market came in a Reuters survey that found that oil output from the Organization of the Petroleum Exporting Countries (OPEC) rose in July to its highest since April 2020.
The OPEC+ supply increases of 400,000 barrels per day of new production are likely to underwhelm and rising energy demand risk should continue to support higher prices above the 78.6% Fibonacci retracement of the prior bearing impulse that has a confluence with the 13 July lows at 73.13. The focus will now be on the highs in the 76 areas so long as 72 holds as support on a retest back from the 74/75 areas. 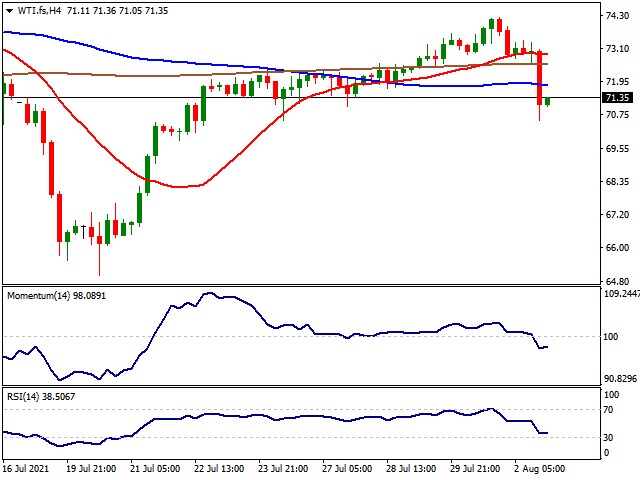 US stocks fell on Monday, surrendering early gains despite the good news in the infrastructure bill. Instead, a manufacturing sentiment index missed expectations and eased to a six-month low. Consequently, the Dow Jones Industrial Average was 0.3% lower at 34,838.16 and the S&P 500 dropped 0.2% to 4,387.16, while the Nasdaq Composite gained less than 0.1% to 14,681.07. As for performers, utilities fared best, with materials the weakest sector.

In data, ahead of this week's all-important Services and the jobs data in Nonfarm Payrolls, the Institute for Supply Management's US manufacturing index fell to 59.5 in July from 60.6 in June. This too missed expectations for 61 in a Bloomberg poll for the manufacturing gauge based on a managers survey. However, the indicator continues to signal a rapid expansion. But, it did pressure yields with the 10-year US Treasury yield dropped to 1.18% from 1.24% Friday, sending real yields down also and weighing on the US dollar. 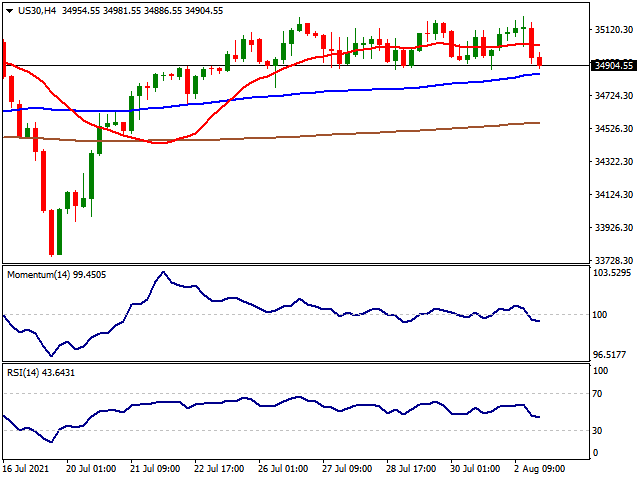