The American dollar fell on Friday, helping EUR/USD to end the week with gains just below the 1.1800 level. The greenback started the day with a weak tone, accelerating its decline after the release of the preliminary estimate of the August Michigan Consumer Sentiment Index, which unexpectedly plunged to 70.2, its lowest in almost a decade. The spread of the Delta variant in the country and its possible effects on the local economy weighed on consumers’ sentiment.

Meanwhile, European data was mixed. The German Wholesale Price Index was up 11.3% in July, missing the market’s expectations although improving from the previous month. The EU June Trade Balance posted a seasonally-adjusted surplus of €12.4 billion, better than anticipated. On Monday, the macroeconomic calendar will have little to offer, as the US will publish the NY Empire State Manufacturing Index for August.

The EUR/USD pair has bottomed at 1.1705 in the previous week, while at 1.1703 in March, and would need now to break below the 1.1700 price zone to resume its bearish trend. The daily chart shows that the recovery stalled around a flat 20 SMA, while technical indicators recovered within negative levels, suggesting limited buying interest. The bullish case will be stronger if the pair advances beyond 1.1920, quite unlikely at this point. In the 4-hour chart, the pair is now well above a mildly bullish 20 SMA but met sellers around the 100 SMA, as technical indicators retreat from near overbought readings, in line with the longer-term perspective. 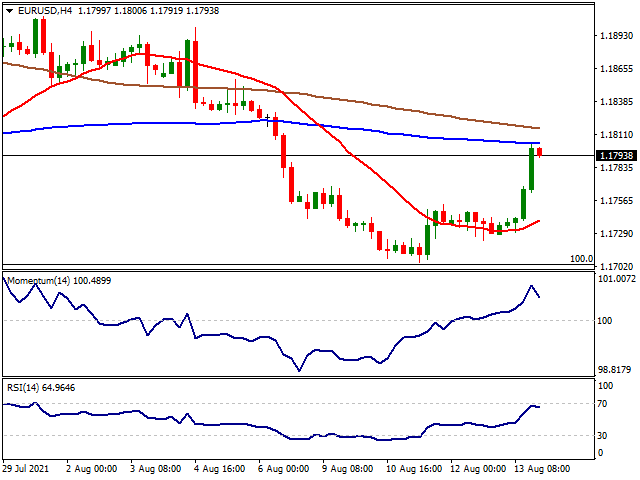 The USD/JPY pair edged sharply lower and settled at 109.60, ending the week with losses. The pair retreated from a one-month high of 110.79 as investors dumped the greenback. The slide gained bearish momentum on Friday, as US government bond yields retreated, with the yield on the 10-year Treasury note settling at 1.28%.  Meanwhile, Wall Street managed to post modest gains, as a series of earnings reports partially offset the dismal mood. As a result, the DJIA and the S&P 500 keep posting record highs.

Japan will start the week by publishing the preliminary estimate of the second quarter Gross Domestic Product, foreseen at 0.2% QoQ from -1% in Q1. The country will also release June Industrial Production and Capacity Utilization.

According to the daily chart, the USD/JPY pair is bearish. It has broken below its 20 and 100 SMAs, which anyway remain directionless, while technical indicators crossed below their midlines, maintaining their strong bearish slopes. The 4-hour chart shows that the pair plunged below all of its moving averages, with the 20 SMA turning bearish although above the longer ones. Technical indicators reached oversold conditions, with the Momentum bouncing modestly but the RSI still heading lower at around 27, skewing the risk to the downside. 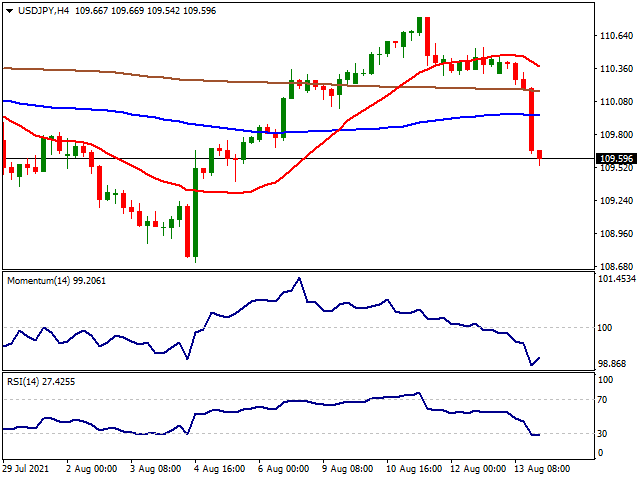 The GBP/USD pair closed the week unchanged at 1.3867, recovering on the broad dollar’s weakness at the end of the week. The American came under selling pressure after US inflation gave signs of having reached a peak and as consumer sentiment plummeted amid the spread of the Delta variant. However, the pound was unable to attract substantial buying interest, as UK’s growth-related data came in mixed.

The UK will release on Tuesday employment-related figures. The ILO unemployment rate for the three months to June is foreseen steady at 4.8%, although the focus will be on the September Claimant Count Change, the number of people claiming from jobless benefits, which printed at -1148K in the previous month.

The GBP/USD pair is neutral in the daily chart, although developing below a daily descendant trend line coming from July’s monthly high at 1.3983, currently providing resistance at 1.3890. In the mentioned chart, the pair is contained between moving averages, meeting buyers on approaches to the 200 SMA. In addition, the Momentum indicator lacks directional strength around its 100 line, while the RSI indicator aims higher at around 50, suggesting but not confirming additional gains. In the near-term, and according to the 4-hour chart, the pair is also neutral, as the pair settled around a mildly bullish 100 SMA, while technical indicators lost strength upward after crossing into positive territory. 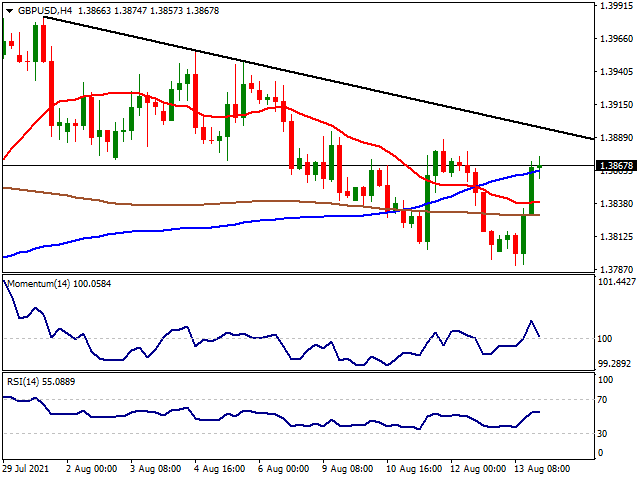 The AUD/USD pair recovered within range to close the week with modest gains around 0.7370. The pair has been pretty much unchanged for a third consecutive week, as the Australian dollar is incapable of attracting buyers despite peaks of broad greenback’s weakness. The pair continued to ignore bullish factors, such as record highs in Wall Street and soaring gold prices. The bright metal accelerated its advance by the end of the week, settling at $1,779.50 a troy ounce.

Australia published July HIA New Home Sales, which plunged 20.5% after advancing 14.8% in the previous month, reflecting the tepid condition of the local economy. The focus during the upcoming Asian session will be on China, as the country will publish July Industrial Production and Retail Sales. Worse than expected figures may spur risk aversion, to the detriment of the aussie.

The AUD/USD pair has spent the last month confined to a 140 pips range, with attempts to break above the 0.7400 figure being quickly reverted. From a technical point of view, the daily chart indicates that the pair is neutral-to-bearish. AUD/USD is currently hovering around a bearish 20 SMA, while the 100 SMA is crossing below the 200 SMA in the 0.7600 area. Meanwhile,  the Momentum indicator is directionless around its midline, and the RSI indicator is ranging around 45. The 4-hour chart shows that technical indicators turned south after entering positive territory, with the price currently stuck around a directionless 100 SMA. 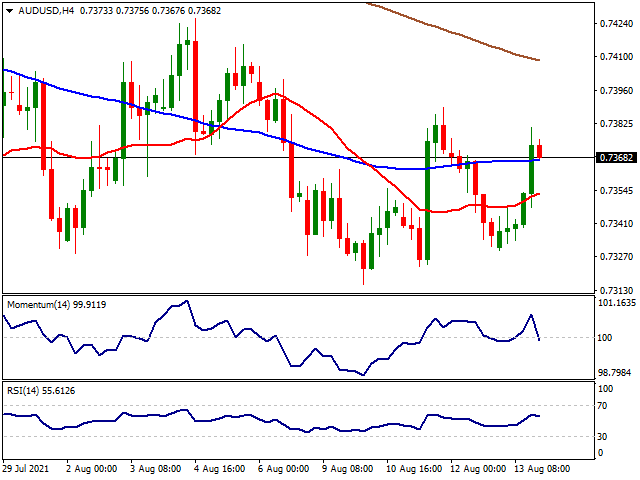 Gold was ending higher on Friday by some 1.54% as the greenback fell to a one-week low against a basket of currencies after a survey showed US consumer sentiment dropped sharply in early August to its lowest level in a decade.

The fall was one of the six largest drops in the past 50 years of the survey, robbing some of the glory that the dollar picked up following the producer price data the prior day that bolstered the case for action from the Federal Reserve. Nevertheless, the dollar index DXY, which measures the greenback against a basket of six rivals, was 0.4% lower at 92.523, its lowest since Aug 6.

Meanwhile, traders continue to look toward the Fed's central banking conference in Jackson Hole, Wyoming, later this month, for clues to the Fed's next move. The event is slated for the 26 and 28 Aug and it matters for gold traders because the Fed’s chair Jerome Powell may use the platform to provide further clarity on the sequencing of the Fed’s monetary tightening operations. Between now and then, US data will be watched closely, including this week’s Retail Sales before the Fed’s preferred measure of inflation, PCE, that will be out during the event on 27 Aug.

Technically, the price has rallied to test the bear’s commitments beyond prior lows and through a 50% mean reversion level. The 61.8% Fibo of drop has also been breached and bulls now eye the 78.6% Fibo at 1,798. Before then, 1,790 comes as the next presumed resistance as being a prior low on 23 July. On the flip side, the 4-hour 10 EMA has a confluence with the 6 Aug structure near 1,758/60 which would be expected to act as support.

The price of silver rose on Friday and ended almost 2.5% higher near $23.76 having rallied from a low $23.17 and to a high of $23.83. The moves on Friday have seen the US dollar correct 61.8% of the recent rally against a basket of currencies, in turn, supporting precious metals before a highly anticipated event that might drive demand for the greenback again.

At this juncture, the greenback will be expected to be highly sensitive to US data leading into the Jackson Hole on 26-28 August where the Fed’s chairman could make an announcement of timings of tapering its bond purchasing. On Friday, the US dollar was pressured following the producer price data and traders will now focus on Retail Sales as well as the FOMC minutes to see how much “progress” the Fed sees in the US economy as well as any hints on tapering timing. 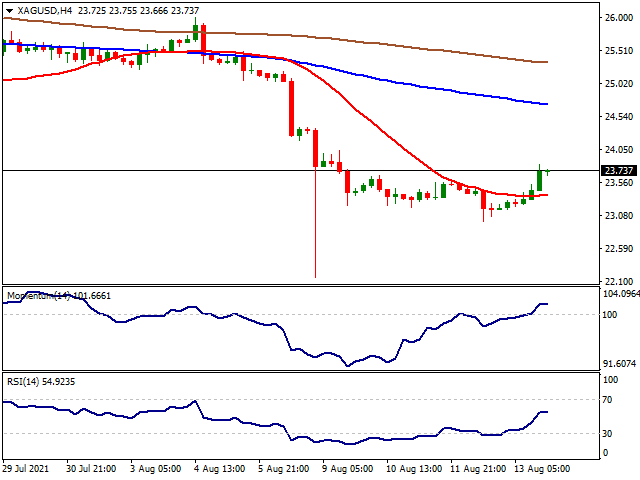 Spot West Texas Intermediate (WTI) crude oil ended lower on Friday, losing almost 1.4% on the day. The price fell from a high of $69.19 to a low of $67.80 dropping for a second-straight session following a day-prior warning from the International Energy Agency (IEA) that the spread of the Covid-19 delta variant is cutting into demand for oil as economic growth stalls. In futures, WTI crude for September delivery settled down US$0.65 to US$68.44 per barrel.

The IEAs that demand for oil began falling last month, dropping by 120,000 barrels per day, and is expected to be 500,000 bpd below its June forecast in the second half of the year as rising Covid-19 infections stall growth. Additionally, the agency has warned that the market could become oversupplied next year, a threat to prices.

Technically, the price has stalled at a dynamic trendline support line and has left a reverse head and shoulders pattern that paints a bullish bias for the week ahead. However, should the price fall below 66.80 structure, then this will tip the bias to the downside and leave prospects of a bearish breakout below the counter trend line where 66.50 will be eyed. 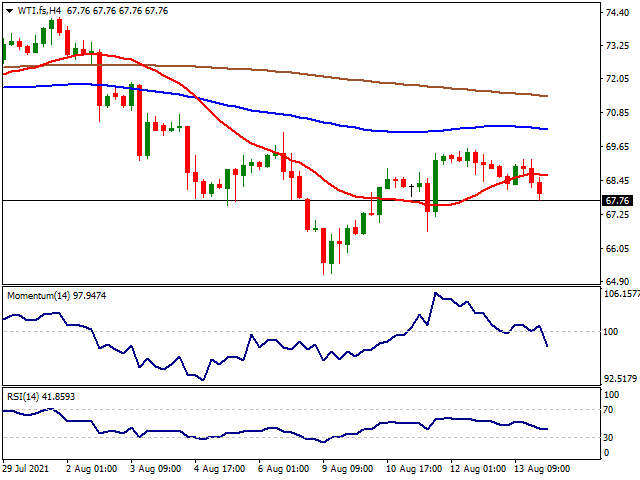 New highs were made in US stocks on Friday in a slower session with most of the action occurring late in the day. The S&P 500 Index rose nearly 0.2% to 4,468.00 and was up 0.7% on the week in an extension of the bullish grind of the last three weeks despite the prospects of tighter monetary conditions. The Dow Jones Industrial Average and the Nasdaq Composite eked out marginal gains to end the week at 35,515.38 and 14,822.90 respectively.

As for performers, drugmakers, staples suppliers, and large-cap techs fared best in a defensive market tilt after a surprise plunge in the University of Michigan consumer sentiment index in response to the recent rise in COVID-19 cases. Pfizer (PFE) gained 2.6% to an all-time high after a panel of advisers to the US Centers for Disease Control and Prevention unanimously recommended a third COVID-19 vaccination booster shot for those with compromised immune systems. Overall, the delta variant has been met with mixed sentiment but the data on Friday has sent yields lower.

Meanwhile, technically, the index is leaning on the prior day’s highs as a support structure around the lows of the day in a 50% mean reversion. If this fails to hold for the day ahead, then the next level of support is eyed near 35.200. 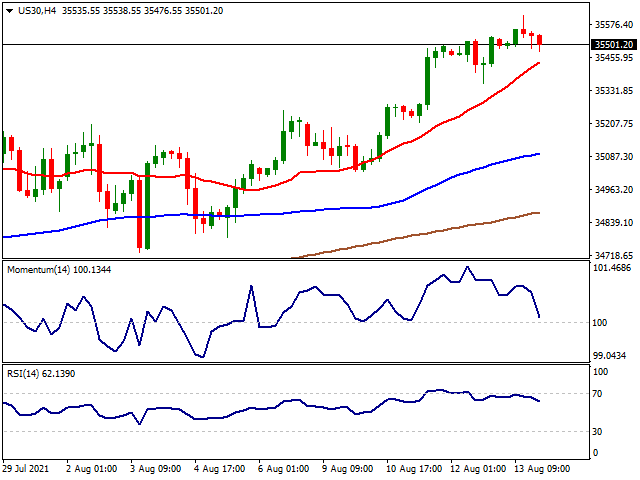