The EUR/USD pair finished Thursday with modest losses around 1.1750, after peaking at 1.1778, a fresh weekly high. The dollar recovered some ground during US trading hours as Wall Street trimmed pre-opening gains and turned red. Geopolitical tensions in Afghanistan and comments from US Federal Reserve Robert Kaplan, who said that September would be the time to outline tapering and start it in October, were behind the slump. James Bullard, another member of the central bank, also made comments in the same direction.

The EU published  M3 Money Supply, which was up 7.6% YoY in July, and the ECB Monetary Policy Meeting Accounts, which noted the need to revise the forward guidance on interest rates. The US published the second version of Q2 Gross Domestic Product, which was upwardly revised to 6.6% QoQ from the previous estimate of 6.5%, missing the expected 6.7%. Core PCE inflation in the same quarter was confirmed at 6.1%, as previously estimated, while Initial Jobless Claims for the week ended August 20 printed at 353K, slightly worse than the 350K forecast.

On Friday, the US will release July core PCE inflation, foreseen at 3.6% YoY, and the final reading of the August Michigan Consumer Sentiment Index, foreseen at 70.7. The event of the day will be Federal Reserve Chair Jerome Powell's speech.

The EUR/USD pair maintains its positive tone in the near term. The 4-hour chart shows that it holds above its 20 and 100 SMAs, with the shorter one about to cross above the longer one. Technical indicators eased within positive levels, with the Momentum about to cross its midline and the RSI consolidating at around 54. The immediate support is 1.1745, although the bearish case will be firmer once below the 1.1700 figure. 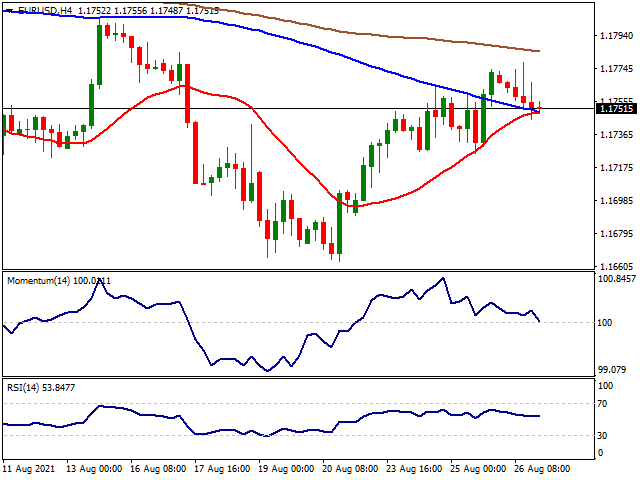 The USD/JPY pair peaked at 110.22 this Thursday, currently trading a handful of pips above the 110.00 mark. The pair was confined to a tight intraday range, led by government bond yields and pretty much ignoring everything else. The yield on the 10-year US Treasury note reached an intraday high of 1.375% but pulled back to 1.34%, where it settled on Wednesday. The poor performance of equities had a limited impact on the pair, although the ongoing risk aversion limits the bullish potential of the pair.

On the data front,  Japan published the July Corporate Service Price Index, which printed at 1.1%, better than the expected 1%, although below the previous 1.4%. On Friday, the country will publish  August Tokyo Inflation data, expected to remain unchanged from a year earlier.
The near-term picture for USD/JPY is positive, although the momentum is limited. The 4-hour chart shows that the pair has held above all of its moving averages, which remain directionless and converge in the 109.80 price zone. The Momentum indicator maintains its bullish slope within positive levels, while the RSI indicator turned south and currently stands at 55. 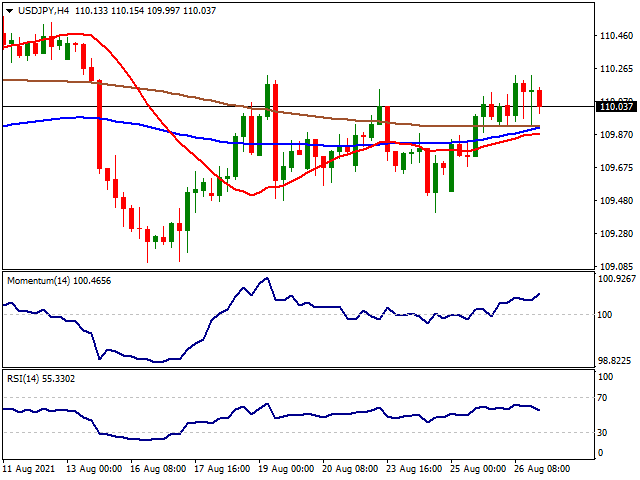 The British Pound weakened against its American rival, with GBP/USD trading below the 1.3700 level ahead of the Asian opening. The dollar gathered pace during the US afternoon, as stocks turned sharply lower following comments from different US Federal Reserve officers hinting at soon-to-come tapering.
The UK did not release macroeconomic figures, but there were news on the Brexit front. Irish Prime Minister Micheál Martin said that the UK and the EU could “sensibly solve” issues over Northern Ireland's post-Brexit trading arrangements with the right political will, following a meeting with French President Emmanuel Macron after the latter visited the country.

The GBP/USD pair has traded as low as 1.3695, offering a bearish near-term perspective. The 4-hour chart shows that it fell below its 20 SMA, which currently converges with a Fibonacci resistance at around 1.3730. In the meantime, technical indicators have retreated to below their midlines, turning flat afterwards. Bears will have higher chances if the pair breaks below the 1.3670 price zone, the immediate support level. 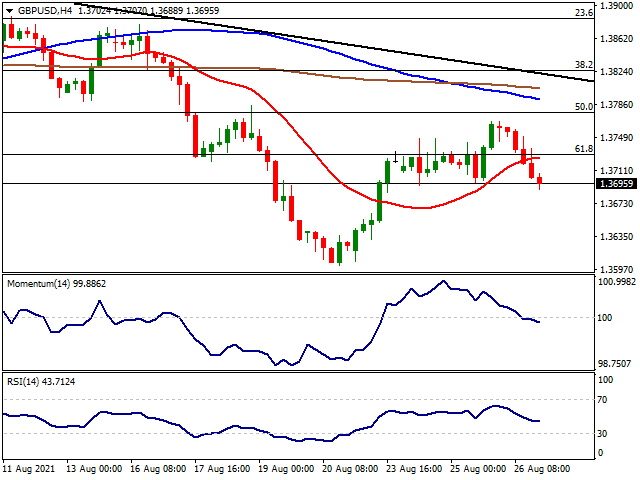 The AUD/USD pair changed course on Thursday and closed the day in the red at around 0.7230. Demand for the aussie was undermined by the soft tone of global stocks, as European and American indexes closed in the red, undermined by renewed speculation about Fed’s tapering. Gold prices seesawed between gains and losses, ending the day unchanged at around $1,790 a troy ounce.

Earlier in the day, Australia published Q2 Private Capital Expenditure, which rose 4.4%, better than the 2.5% expected. During the upcoming Asian session, the country will release July Retail Sales, expected to be downwardly revised from -1.8% to -2.3%.

The AUD/USD pair is poised to extend its decline in the near term. The 4-hour chart shows that it is finishing the day a few pips below its 20 SMA, while technical indicators are pressuring their midlines from above with firmly bearish slopes. A break below 0.7200 should confirm a steeper decline on the final trading day of the week. 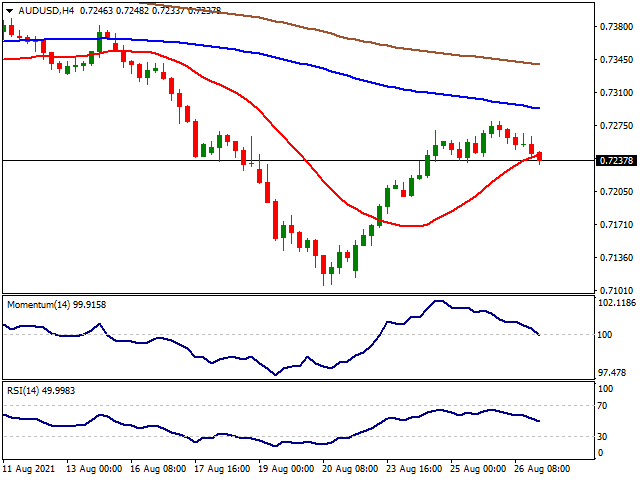 The price of gold was ending Wall Street flat near $1,790 and within familiar ranges between $1,780 and $1,798, ignoring hawkish rhetoric from Fed members interviewed ahead of a keynote speech from Fed’s chairman Powell on Friday.

The US dollar was better-bid and US yields were on the rise following Fed’s James Bullard, Robert Kaplan and Esther George's hawkish comments in the media. All three of the hawks have downplayed the impact of the coronavirus delta variant in separate interviews.

Both George and Kaplan said their business contacts were telling them the economic effects remained limited. "By and large what we are hearing..is they are weathering this resurgence at least as well as previous surges, and many are telling us the impact on their business is more muted," Kaplan told CNBC. Bullard spoke of the same which has left a more hawkish prospect for Powell’s speech on Friday that will follow shortly after the Fed’s preferred measure of inflation, PCE data.

Meanwhile, US 10-year treasury yields are higher again, reaching a 10-day high of 1.3750%. Critically, they have now moved into a positively bullish territory on the daily chart crossing above the 200-day SSMA. The technical bias is also bullish following the daily double bottom and bullish hammer.

DXY moved in on the 93 handle and US stocks took a nosedive following the hawkish Fed rhetoric. This exposes the downsie in the price of gold for the day’s ahead, depending on the outcome of tomorrow's key events; They are a cocktail for volatility which leaves both the $1,810 vulnerable to the upside and $1,770 to the downside as the critical breakout levels. 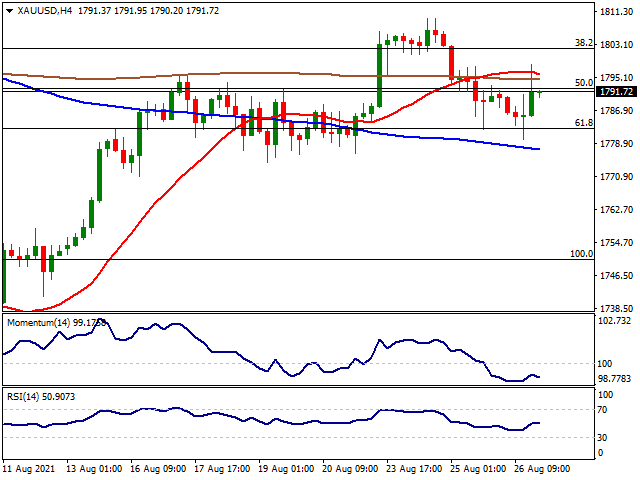 The price of silver has been pressured more so than its sister metal, gold, reacting negatively to the risk-off mood ahead of the keynote speech from Fed’s Powell on Friday. XAG/USD fell some 1.24% into the Wall Street closing hour and ended the session near $23.55. It had fallen from a high of $23.87 to a low of $23.43.

DXY, as measured by a handful of key currencies to the US dollar was perking up from critical support which has sent a warning to the precious metals market before Powell’s speech and US PCE data on Friday. DXY rallied to a high of 93.078, a stone throw away from critical hourly swing highs of 93.13. Nevertheless, it broke through hourly trendline resistance which leaves the bias in the bull’s camp into the remaining sessions of the week; a headwind for the price of silver as US stocks reel in the face of tighter money conditions.

Technically,  to the downside, a break of 23.00 and then 22.00 opens the risk of a weekly downside continuation. On the upside, the 27 July lows near 24.50 is the next probable resistance zone. This also meets the daily trendline resistance. A break of the trendline sees a run on 26.00 stops and prospects of a continuation of the long-term bullish trend that puts 28.00 on the radar.

West Texas Intermediate (WTI) crude oil was consolidating around a critical level of resistance, but it fell on the day as fresh COVID-19 outbreaks fueled by the Delta variant raised concerns about the strength of the economic recovery globally.

Meanwhile, ''most of the oil-importing countries of Southeast Asia are seeing a wildfire surge of new Covid-19 infections, with lockdown measures in place in many areas,'' Reuters explained in a note on Thursday. In the United States, the Washington Post reported that ''the number of patients hospitalized with Covid-19 topped 100,000 for the first time since January.'' This is in contrast to the start of the week's optimism over slowing cases and leaves the price vulnerable for the days ahead.

Additionally, the company Pemex began to send significant oil supplies to the market after a deadly weekend fire at a gulf oil platform that had forced the shut-in of about a quarter of the company's production. Moreover, the US dollar, for which global oil is generally priced, was recovering in a resurgence fueled by hawkish Federal Reserve speakers that are circling over the Jackson Hole event. This should keep a lid on the commodity complex in general ahead of the speech.

From a technical perspective, the weekly counter-trendline near the 69.50/71 territories are now over the horizon as the price fails to break the 78.6% Fibonacci level at the day's highs. The focus is on the 66.50 and a break there will expose the downside once again to target the daily swing lows near 61.80 then 57.30. However, a break of the near term daily and weekly resistance structures, including the counter-trendline, will leave scope for a continuation towards July's highs near 77.00. 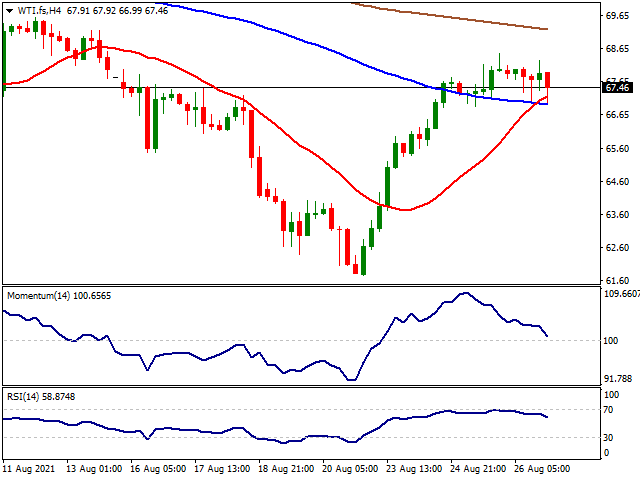 US stocks sank on Thursday as hawkish Federal Reserve policymakers urged for a faster timing for trimming the Fed’s QE in remarks ahead of Fed Chair Jerome Powell's keynote speech to the annual Jackson Hole symposium on Friday.

Economic numbers released on Thursday furthered the Fed's narrative that risks to the recovery in the labour market persist, although the outlook has improved. On the negative side, the number of US workers filing first-time applications for unemployment benefits edged up by 4,000 last week to 353,000, according to the Labor Department. Analysts expected a smaller uptick to an even 350,000. However, the 4-week moving average of initial claims, which irons out week-to-week volatility, moved lower last week, so the overall trend remains on a downslope.

Separately, the Commerce Department released its second stab at second-quarter Gross Domestic Product number, adding 0.1 percentage point to show the economy grew at a 6.6% quarterly annualized rate in the April to June period. However, the data fell just short of the 6.7% consensus.

Next inline, the Fed's preferred inflation measure will come out before Powell is set to speak on Friday. On an overall risk-on the outcome, i.e., strong economy but no signs of a taper announcement, the tech and tech-adjacent mega caps as well as economically sensitive cyclical and small-caps will likely continue to lead the way. The bulls can target the highs of the Dow with a view to breaking into new bullish territory. On the other hand, and as things stand due to Thursday’s hawkish comments, a 50% mean reversion target comes in near 35,067 while a deeper retracement to the 61.8% Fibo comes in just below the psychological 35,000. 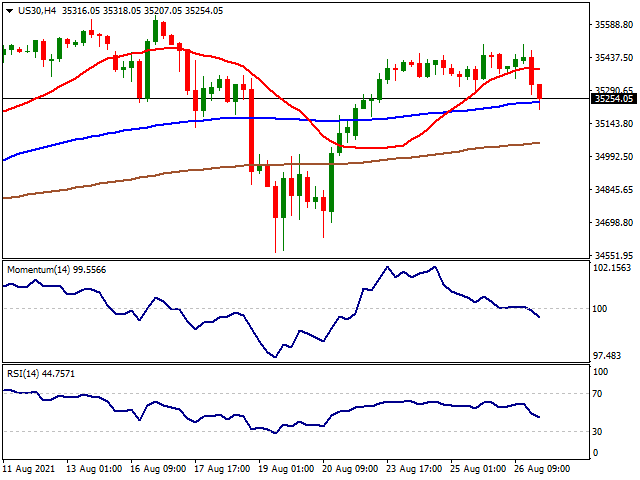